Inomin Mines Inc. (TSXV: MINE), ("Inomin", "MINE" or the "Company") is responding to misleading comments and statements made by newsletter writer, John Kaiser ("Kaiser"), publisher of Kaiser Research Online. In Mr. Kaiser's blog and podcast of March 31, he made a number of inaccurate and misleading remarks about the Company's March 29th announcement ("News Release") reporting drill results from Inomin's Beaver critical minerals property discovery. Mr. Kaiser's remarks contributed to a sell-off in the Company's shares, with the stock closing down 29.5% on March 31.

A few of John Kaiser's False and Misleading Remarks:

Kaiser implied the Company used the wrong analytical technique for the samples, and off-the-cuff stated what the grades should actually be.

Inomin consulted with SGS Laboratory professionals prior to submitting samples for analysis. SGS's best recommendation was to utilize a mild sodium peroxide digestion to deal with the issue of analyzing for silicate nickel, as stated in the Company's News Release.

Kaiser stated the Company presented assay results in ppm instead of percentage to confuse investors.

Reporting assay results in ppm is a common, standard reporting practice. The Company also reported select better grades in percentage in the title and first paragraph of news release. Stating we intended to confuse investors is false.

Quebec-based Alliance Magnesium Inc (AMI) and Marubeni Metals and Minerals Canada Ltd. are planning the mining and processing of serpentine ore as an environmentally friendly source for magnesium at their Danville metallurgical site. The magnesium plant currently under construction will process 100 million tons of serpentine rock, the raw material that AMI will use in its production.

Kaiser suggested we paid UBC (University of British Columbia) to analyze our samples to participate in the university's carbon sequestration program.

Inomin did not pay UBC for analysis of the Company's samples. Furthermore, UBC specifically requested the Company submit magnesium-rich samples.

A critical material is generally defined as a raw material of great economic importance with high risks of supply constraints. Magnesium, nickel, and chromium are among the list of critical minerals for Canada and the United States.

Inomin stands by its discovery announcement of March 29, 2022. The Company believes it has the opportunity to delineate significant resources of critical minerals of which magnesium is currently the most valuable having increased approximately 400% in the past 12 months. 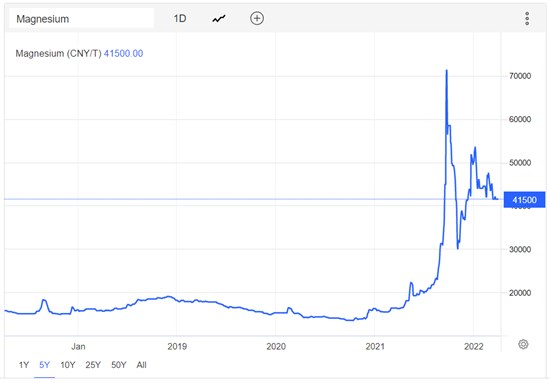 For large scale mining projects, infrastructure is key. At the Beaver project, the land is flat lying, meaning that drilling and exploration activity can occur year-round without the need of helicopters, air support or boats. There is a nearby paved highway, all-season forestry roads, major power lines and nearby active rail lines. Local mining services and infrastructure are available at the nearby city of Williams Lake.

Inomin is planning a next phase exploration program at Beaver-Lynx to build on the Company's autumn 2021 drill discovery. Subject to financing, the Company expects to complete a substantial drilling program to determine the extent of mineralization at Beaver, as well as continue to define drill targets for the nearby Lynx property.

Inomin Mines Director, L. John Peters P.Geo, a qualified person as defined by NI43-101, has reviewed and approved the technical information in this news release.

Inomin Mines is focused on the acquisition and exploration of mineral properties with strong potential to host significant resources, especially gold, silver and critical mineral projects. Inomin holds the La Gitana and Pena Blanca gold-silver properties in Mexico. The Company owns a 100% interest in the Beaver-Lynx sulphide nickel project in south-central British Columbia, and the Fleetwood zinc-copper-gold-silver VMS project in south-west British Columbia. Inomin also holds a royalty on the King's Point gold-copper-zinc project in Newfoundland owned by Maritime Resources Corp. Inomin trades on the TSX Venture Exchange under the symbol MINE. For more information visit www.inominmines.com and follow us on Twitter @InominMines.

To view the source version of this press release, please visit https://www.newsfilecorp.com/release/119073

Inomin Mines Inc. (TSXV: MINE) ("Inomin", "MINE" or the "Company") reports signing a drilling agreement for the Company's Beaver-Lynx critical minerals property, an emerging magnesium-nickel-chromium-cobalt discovery located in south-central British Columbia. The next drilling is aimed at expanding Inomin's significant 2022 discovery and working towards delineating resources at Beaver. Maiden drilling is also planned at the Lynx area to test if mineralization is similar to discoveries at Beaver. Drilling is targeted to start this spring, with further drilling anticipated in summer andor autumn.

John Gomez, President of MINE comments, "We're happy we have been able to secure the same drilling company that we worked with to make our inaugural big discoveries at Beaver. Our team is excited to build on our successful exploration programs and test multiple, large, mineral footprints. We also look forward to completing first-ever drilling at Lynx that has even larger targets."

Inomin Mines Inc. (TSXV: MINE), ("Inomin", "MINE" or the "Company") reports that metallurgical test work for the extraction of magnesium from the 2021 Beaver drill core samples achieved recoveries of 99% using hydrochloric acid (HCl) leaching. The metallurgical test results demonstrate the ability to extract a very high level of magnesium utilizing conventional processing. The positive test results are an important milestone for the Company's Beaver-Lynx critical minerals property, an emerging magnesium-nickel-chromium-cobalt discovery located in south-central British Columbia.

Inomin Mines Inc. (TSXV: MINE), ("Inomin", "MINE" or the "Company") reports it has staked 1,516 hectares of mineral claims to enlarge the Company's Beaver-Lynx critical minerals project to 22,436 hectares. The new claims were acquired to cover prospective magnetic targets identified by airborne surveys.

Inomin Mines Inc. (TSXV: MINE), ("Inomin", "MINE" or the "Company") is pleased to report positive initial test results demonstrating the potential for carbon capture and storage at its Beaver critical minerals project (magnesium-nickel-chromium-cobalt) in south-central British Columbia. The tests, carried-out by researchers at the University of British Columbia ("UBC"), demonstrate that samples from the Company's 2021 critical mineral discovery, contain key minerals that sequester carbon dioxide (CO2.) from the atmosphere.

Inomin Mines Inc. (TSXV: MINE), ("Inomin", "MINE" or the "Company") reports completion of a ground magnetics survey on the Lynx property, generating numerous drill targets. Approximately 171 line-kilometres (kms) of magnetic readings were taken across two grids encompassing the Bear and a portion of the Skulow zones, two large 2 x 3 km nickel targets (Figure 1).

As at Inomin's Beaver property, where the Company reported on March 29, 2022 a significant discovery of critical minerals including magnesium, nickel, and cobalt, ground magnetics have delineated multiple linear features extending up to 1.5 kms in length. These strong magnetic structures - typically associated with mineralization - will be used for drill targeting. Given the geologic and mineral similarities, the Company anticipates Lynx hosting potentially comparable nickel and magnesium grades as at Beaver.

Challenger Exploration (ASX: CEL) (“CEL” the “Company”) is pleased to announce outstanding results from the ongoing drill program at the Hualilan Gold Project, located in San Juan Argentina, with extension and infill holes from the Verde Zone reported in this announcement.

VIDEO — Lynette Zang: A Tectonic Shift is Brewing, Get Outside the System Now

A "tectonic shift" is coming as the US moves from one interest rate benchmark to another.

That's according to Lynette Zang, chief market analyst at ITM Trading. She told the Investing News Network that as of June 30, 2023, the US will use the SOFR rate instead of the LIBOR rate, which means contracts across the board will be revalued.

At this year's Vancouver Resource Investment Conference (VRIC), Lobo Tiggre, editor and founder of IndependentSpeculator.com, spoke about the difference between rationalism and empiricism when it comes to investing.

For Tiggre, gold and uranium are two "now" sectors that he's paying attention to.

The world holds several hundred active gold mines, but not all are created equal. So what makes a world-class deposit?

The world’s largest gold operation by production is Barrick Gold (TSX:ABX,NYSE:GOLD) and Newmont's (TSX:NGT,NYSE:NEM) Nevada Gold Mines joint venture in the US. An important source of gold, the mining complex is comprised of 10 underground mines and 12 surface mines, including the famous Cortez and Goldstrike mines.

Element79 Gold Corp. (CSE:ELEM) (OTC:ELMGF) (FSE:7YS) ("Element79 Gold", the "Company") provides an update with respect to the previously announced Management Cease Trade Order (the "MCTO") issued by the British Columbia Securities Commission on January 4, 2023. The Company is providing notice in accordance with National Policy 12-203 – Management Cease Trade Orders (“NP 12-203”). The MCTO was issued by the BCSC on January 4, 2023. It prevents the Company’s President and Chief Financial Officer from trading in the Company’s securities but does not affect the ability of other shareholders, including the public, to trade in the securities of the Company.