Investing News Network
VANCOUVER, BC ACCESSWIRE January 13, 2022 Tinka Resources Limited is pleased to announce an exploration update at its 100% owned zinc-silver and copper-gold projects in Central Peru. HIGHLIGHTS: Silvia NW copper-gold project: Copper-gold mineralization at ‘Area A' has been significantly expanded with the discovery of high-grade copper-gold veins in limestone up to 100 metres across-strike from previously sampled ...

VANCOUVER, BC / ACCESSWIRE January 13, 2022 / Tinka Resources Limited ("Tinka" or the "Company") (TSXV & BVL: TK) (OTCQB: TKRFF) is pleased to announce an exploration update at its 100% owned zinc-silver and copper-gold projects in Central Peru.

Dr. Graham Carman, Tinka's President and CEO, stated: "Tinka's field work at Silvia NW continues to expand the scale of this exciting new copper-gold skarn prospect. The discovery of Skarn Veins in the limestone surrounding the original discovery outcrop is very important because it shows that the mineralized system is significantly wider than previously thought. Skarn deposits in Peru have formed some of the largest and highest-grade copper deposits in the world, prime examples being Antamina (a global top-10 copper mine) some 90 km to our north, and Las Bambas in southern Peru. A preliminary mineralogical study of the copper-gold mineralization at Silvia NW shows that copper occurs almost exclusively as chalcopyrite, while gold appears to occur mostly in the form of fine-grained native gold. Also, the mineralization at Zone A does not appear to contain significant levels of deleterious elements. Our team has continued its sampling and mapping program at Areas B and C, and we look forward to reporting progress once all results are received."

"At our flagship Ayawilca zinc-silver project, a geological reinterpretation of near vertical structures discovered at South Ayawilca in 2020 suggests that there is further potential to expand the high-grade silver-lead-zinc mineralization. We are planning to commence a resource extension and definition drill program during the first half of 2022, which will include drill holes aimed at expanding this style of mineralization, " Dr. Carman continued.

Tinka's exploration program at Silvia NW has focused on the mapping and sampling of Area A, believed to expose the deepest and highest grade portion of the skarn system along the 3 km x 1 km trend.

Copper-gold mineralization at Area A lies in the base of a valley and has been mapped over a 550 metre by 400 metre area (see Geology map - Figure 2). Skarns are hosted by limestone of the Jumasha Formation (Cretaceous age) and within intrusive dikes (Tertiary age). Mineralized skarn is exposed in the central part of the area, surrounded by marble (recrystallized limestone). There are substantial areas of scree cover between outcrops of skarn, due to the steepness of the valley walls. Mineralized skarn is developed within both the limestone and intrusive dikes of quartz-feldspar-biotite porphyry. Multiple, subparallel structures orientated ENE-WSW and NE-SW, are believed to control the copper-gold mineralization.

"Skarn Veins" reported here have been mapped and sampled in the surrounding limestones on the western and southern side of Area A, some 100 metres from outcrops of continuous skarn near the centre of the valley (previously trench sampled - see Figures 2 and 3). Skarn Veins are hosted in a north-south oriented garnet skarn measuring up to 50 metres in strike length and up to 20 metres in thickness, developed in Jumasha Formation limestone. Strongly mineralized veins, which are largely oxidized, have multiple orientations and individual thicknesses up to 0.3 metres.

Skarn mineralization consists of garnet-magnetite-pyroxene-amphibole and other calcsilicates with chalcopyrite and pyrite. Copper mineralization occurs predominantly as chalcopyrite, while gold appears to occur mostly as native gold with possible telluride minerals (yet to be formally identified). The location and form of the Skarn Veins is shown in Figure 3. A photomicrograph of high-grade copper and gold mineralization from Area A, including native gold within chalcopyrite, is shown in Figure 4. Table 1 highlights the new copper-gold rock sample results from Area A.

Table 1. New surface sampling results from Area A in this release 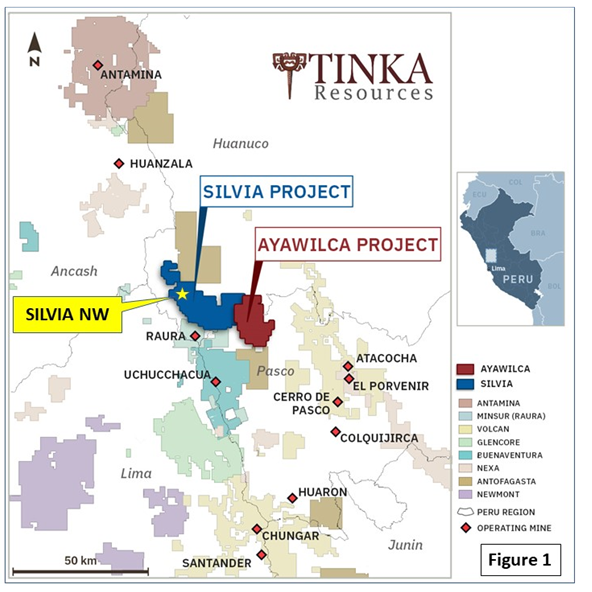 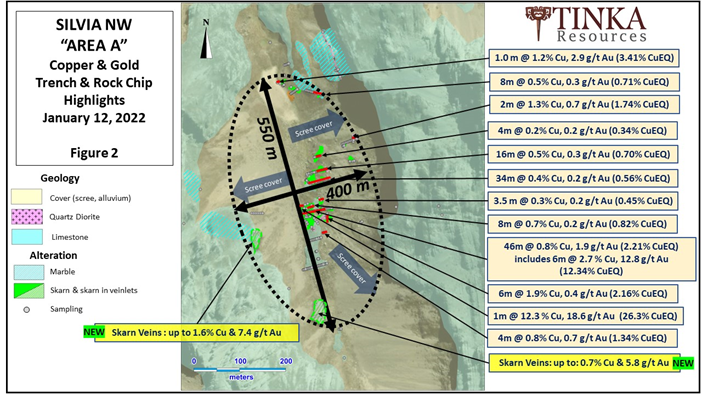 Figure 3 - Area A, highlighting the discovery of Skarn Veins in limestone and high-grade Cu-Au trench results 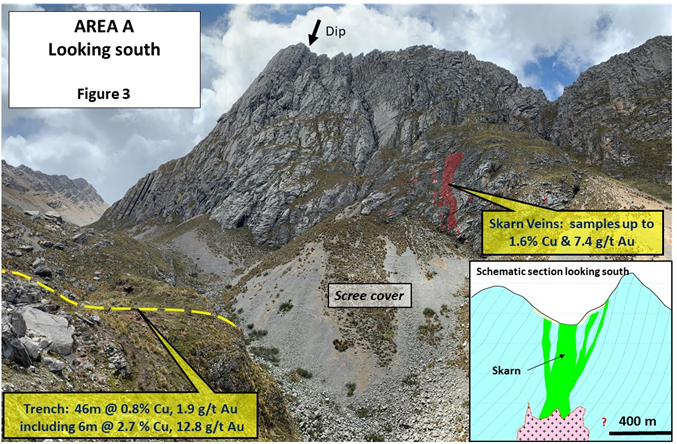 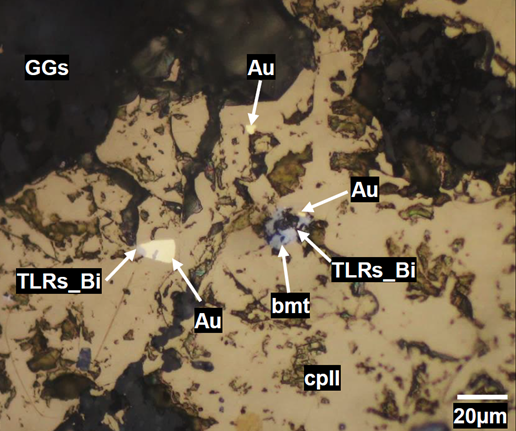 Notes on sampling and assaying

Trenches were dug up to a depth of 1 metre, where possible, across areas of outcrop (partially weathered) to test the grade of skarn and adjacent limestone and intrusions. Trench samples are continuous samples collected with hammer and chisel over 1 to 2 metre intervals. In areas of sporadic outcrop, samples are taken as semi-continuous rock chips. Tinka believes that the trench samples are representative of the outcrop and are non-selective. Selective samples were collected across narrow mineralized structures and are not necessary representative. Samples were bagged and labelled in the field. Samples were sent to Certimin laboratory in Lima where samples were dried, crushed to 90% passing 2mm, then 1 kg pulverized to 85% passing 75 microns. Gold was analysed by fire assay on 30 g (method G0108) and multi-element analysis by ICP using multi-acid digestion (method G0176). Gold assays above 10 g/t Au were re-assayed by a high grade fire assay method and a gravimetric finish (method G0014). Copper assays over 1% Cu were re-assayed by atomic absorption (method G0039). Standards and blanks were not inserted by Tinka but were inserted at the laboratory.

The Qualified Person, Dr. Graham Carman, Tinka's President and CEO, and a Fellow of the Australasian Institute of Mining and Metallurgy, has reviewed and verified the technical contents of this release.

Trevali Mining Corporation ("Trevali" or the "Company") (TSX: TV) (OTCQX: TREVF) ( Frankfurt : 4TI) is pleased to provide an update for the financing of the Rosh Pinah Expansion project (" RP2.0 "). The results of the Feasibility Study were released on August 17, 2021 and are available on Trevali's SEDAR profile at www.sedar.com . Trevali is currently working toward securing project financing for the RP2.0 expansion project and refinancing both the existing Corporate Revolving Credit Facility and Glencore Facility, maturing in September 2022 . In parallel, an early works program has commenced for RP2.0 .

The power crisis and increasing demand for the base metal as strict COVID-19-related lockdown restrictions were lifted supported prices for zinc during the 12 month period.

As the new year begins, the Investing News Network (INN) caught up with analysts to find out what’s ahead for zinc supply, demand and prices. Read on to learn what they had to say.

Zinc prices surged more than 20 percent in 2021, touching their highest level in 14 years in October.

A demand rebound after economies around the world lifted restrictions, paired with supply-side concerns over rising power costs, helped the base metal hit a yearly high of US$3,794.50 per tonne.

Here the Investing News Network (INN) looks back at the zinc trends for 2021, from supply and demand dynamics to how the metal performed and what analysts said quarter by quarter.

After becoming one of 2020's best-performing metals, zinc rallied into 2021 to reach a 14 year high.

The base metal started January at US$2,799 per tonne on the London Metal Exchange. As global economies begin to rebound from the COVID-19 pandemic, zinc held onto its gains, surpassing US$3,900 in October.

Upward price action in the zinc market has also been good for junior zinc-mining stocks. Here’s a look at the five top junior zinc stocks on the TSXV that have seen share price gains year-to-date.

Rumble Resources Limited (ASX: RTR) (“Rumble” or “the Company”) is pleased to announce that the ongoing scoping drilling at the Earaheedy Project has discovered a major feeder fault zone with very significant zinc-lead-silver mineralisation along with strong copper mineralisation at the Chinook Prospect. Additionally, the first round of drilling at the Navajoh Prospect has delineated significant flat lying unconformity style zinc-lead-silver mineralisation similar to the Chinook and Tonka discoveries.
Keep reading... Show less
Investing News Network

Metallum to Issue Shares to CEO; Reports on Change In Directors