Northern Lights is pleased to announce that it has received approval from the US Bureau of Land Management (the “BLM”) to commence drilling at the Secret Pass Gold Project (“Secret Pass” or the “Project”) in Mohave County, Arizona.

VANCOUVER, BC / ACCESSWIRE / March 31, 2021 / Northern Lights Resources Corp. (“Northern Lights” or the “Company”) (CSE:NLR)(OTCQB:NLRCF) is pleased to announce that it has received approval from the US Bureau of Land Management (the “BLM”) to commence drilling at the Secret Pass Gold Project (“Secret Pass” or the “Project”) in Mohave County, Arizona

A total of 15 holes, for 2,300 metres, have been approved for drilling at 12 target prospects on the Secret Pass BLM mining claims. The BLM mining claims at Secret Pass have a total area of 656 hectares and account for the majority of the total license area, comprising of the northern section of the project license area as well as the FM zone in the southeast quadrant of the Project area (see Figure 1).

The permit to drill an additional 5 holes, for 1,150 metres, at the Tin Cup prospect on the State Exploration Permit area (212 hectares) is pending approval from the Arizona State Land Department (see Figure 1). The Company expects to receive the approval to drill the planned holes at Tin Cup in the coming weeks.

The targeted prospects have been identified by Northern Lights through a systematic exploration program over the past six months that has included an airborne magnetic survey, reinterpretation of historic Induced Polarization (IP) data, detailed mapping and the collection of over 400 stream and pan concentrate samples (final assays and interpretation pending).

CEO, Jason Bahnsen, commented “We are delighted to receive permits to commence drilling at the Secret Pass Gold Project. Preparation of drill access roads will begin immediately and our drilling contractor is planning to be on site by April 5th. Drilling will initially focus on the Fiery Squid and Tentacles prospects before where we see significant potential associated with numerous historic workings at each of the prospect sites.”

The Phase 1 drill program will focus on two previously unexplored prospects at Fiery Squid and The Tentacles and the historic mine area at Tin Cup. (see Table 1)

Fiery Squid and The Tentacles Prospects

The Fiery Squid and Tentacles prospects are located within a zone of intense sericite-quartz-FeOx alteration which trends northwest and covers an area approximately of 1000 x 500 meters. The alteration is associated with a swarm of rhyolite dykes that have intruded older andesite volcanics.

The planned holes range in length from 100 to 150 metres and are designed as initial reconnaissance holes to test mineralization associated with the historic workings.

Historic drilling at Tin Cup identified a mineralized zone with a strike length of approximately 245 metres and has been drill tested to a depth of only 180 metres. Based on historic drilling, high-grade mineralization is localized in 3.0 to 7.6 metres wide, steep westerly-dipping structures that occur within a much wider mineralized fault zone that ranges from 30 to 45 metres in width. Historic drill assays from Tin Cup ranged up to 7.6 to 40.4 grams per tonne gold over mineralized widths of 1.5 to 32 metres. See the Northern Lights press release of October 26, 2020, for further details). The mineralization has a northwest plunge and is open at depth.

The five holes at Tin Cup (1,150 metres) are planned to confirm high-grade mineralization from historic drilling to test the down plunge extension of the mineralization and to test the system to a depth of approximately 350 metres below the surface. Permits to commence drilling of the Tin Cup holes are pending approval of the Arizona State Land Department.

Under the permits granted by the BLM, Northern Lights has the flexibility to drill any of the 22 permitted holes and can maintain a progressive rehabilitation program with up to 350 metres of drill holes remaining open at any time during the permit period. The BLM permits are valid for 2 years and can be renewed for a subsequent 2 years with written approval.

Subject to the final assay results and interpretation of the approximately 400 stream sediment and pan concentrate samples that were collected by the Company in Q4 2020, Northern Lights may modify the planned Phase 1 drill plan to include additional prospects on the BLM mining claims. 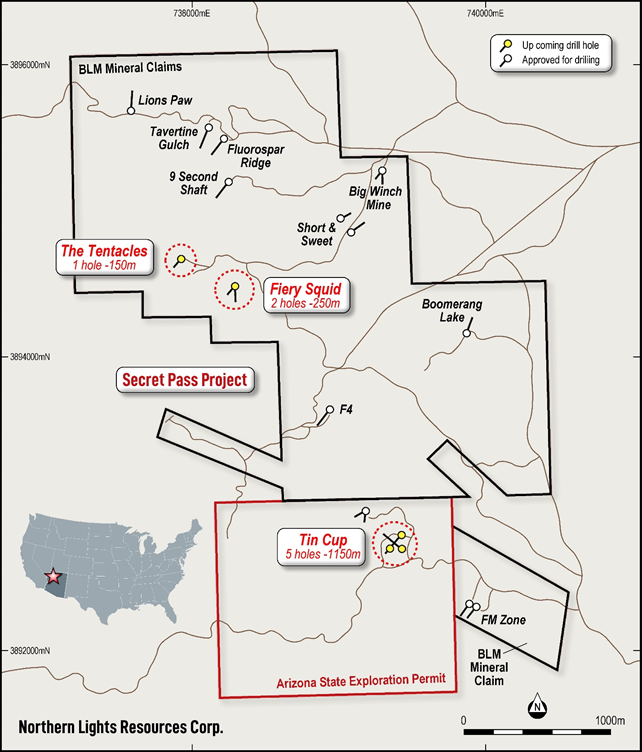