E3 METALS CORP. an emerging lithium developer and leading lithium extraction technology innovator, is pleased to announce its Aquifer Management Plan and resource increase, in conjunction with the recently announced PEA on the Clearwater Lithium Project. Updated Resource Estimate The inferred mineral resource estimate for the Clearwater Project Area has been updated to 410,000 tonnes of elemental lithium. The …

The inferred mineral resource estimate for the Clearwater Project Area has been updated to 410,000 tonnes of elemental lithium. The updated resource now totals 2,200,000 tonnes of lithium carbonate equivalent (LCE), from 1,900,000 tonnes LCE, with E3 Metals now holding 7.0Mt LCE inferred mineral resources. It is reasonably expected that the majority of the Inferred Mineral Resource Estimate could be upgraded to Indicated Mineral Reserves with continued exploration. In 2021, E3 has an expanded geological program planned that leverages decades of existing oilfield data to support E3’s goal of upgrading the Company’s Clearwater resource.

Several factors contributed to the updated estimate, including:

In order to produce lithium products, brine from the Leduc Aquifer will be pumped to surface from a series of production wells operating at approximately 3,300 m 3 /day using electric submersible pumps. A group of wells will be located at two brine production areas, located to the north and south of the Central Process Facility (CPF), each producing just over 64,000 m 3 /day (Figure 1). Additional wells have been planned and included in the cost estimate for redundancy purposes. From there, the brine will be transported through underground pipelines, each about 15 km in length, to the CPF for pre-treatment and lithium extraction using E3’s proprietary Direct Lithium Extraction (DLE) process. After the lithium is removed, the brine will be re-injected back into the aquifer through a series of wells located in proximity to the CPF. 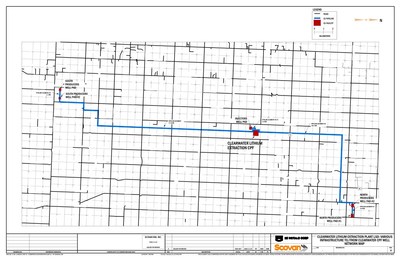 An Aquifer Management Plan (AMP) is an essential step to promoting resource longevity. Starting with an understanding of the aquifer’s natural geological characteristics, the long-term behaviour and movement of the brine in the subsurface is modelled while leveraging the aquifer’s key advantages. These include the reservoir characteristics (or the ability for brine to flow within it) and size and of the Leduc Aquifer, which spans 100’s of km 2 .

Building upon this, E3 Metals has developed the Clearwater Project Area Aquifer Management Plan after analyzing 60+ years of oil, gas and brine production across the project area. This includes geological data, production data, and geophysical data, including wireline logs, to characterize the aquifer. Based on the aquifer characterization, an aquifer model was developed to predict the movement of fluid and lithium in the reservoir during the project life.

The production and injection plan outlined above results in a pressure differential that effectively sweeps the production area of lithium enriched brine from the injection wells to the production wells. Figure 2 displays the modelled lithium distribution after 10 years and 20 years of production. The Aquifer Management Plan and associated modelling can support E3 to efficiently manage fluid flow and mixing patterns in the subsurface aquifer to extend the resource life across the Clearwater Project Area. 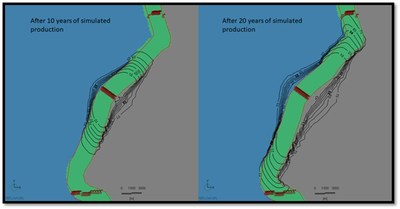 “I am very pleased to see this advancement of E3’s inferred resource estimation in association with the release of our PEA results”, stated Liz Lappin , E3’s VP Corporate Affairs and Exploration, “As we move into the new year, we plan to continue to advance the aquifer development program with the goal of upgrading the resources to Measured and Indicated.”

E3’s Clearwater resource is classified as inferred because geological evidence is sufficient to imply but not verify geological, grade or quality continuity. Lithium Carbonate Equivalent (LCE) is calculated by multiplying the elemental lithium contained within the resource by 5.323.

E3 Metals is a lithium development company with 7.0 million tonnes of lithium carbonate equivalent (LCE) inferred mineral resources 1 in Alberta . E3 Metals is currently advancing its proprietary direct lithium extraction (DLE) process in partnership with Livent Corporation, a global leader in lithium production, under a joint development agreement. Through the successful scale up its DLE process towards commercialization, E3 Metals’ goal is to produce high purity, battery grade, lithium products. With a significant lithium resource and innovative technology solutions, E3 Metals has the potential to deliver lithium to market from one of the best jurisdictions in the world. E3 Metals also continues to work with partners at the University of Alberta and at GreenCentre Canada. For more information about E3 Metals, visit http://www.e3metalscorp.com .