Snowline Gold Corp. (CSE:SGD) (the "Company" or "Snowline") is pleased to introduce its 100% owned, 710 hectare Cynthia Gold Project located in the Selwyn Basin, eastern Yukon Territory. The Cynthia claims cover a 4 square kilometre area of gold mineralization between two adjacent exposures of a Cretaceous Tombstone suite intrusion. Mineralization is controlled by district-scale fault zones and is especially intense in the central part of the project. Surface grab samples in these zones commonly assay from 200 ppb to 3 grams per tonne gold, with values up to 16 gt Au in a central zone. Cynthia is along strike of the past producing Plata silver mine, and is within 8 km of an inactive heavy equipment winter access trail that connects to the North Canol Road

Cynthia is interpreted to have both bulk-tonnage and high grade, structurally-controlled exploration potential . Historical first pass drilling in 2010 returned broad zones of elevated gold associated with extensive quartz veining and stockwork, including 1.2 g/t Au over 6.5 m within a broader interval of 0.43 g/t Au over 32 m (drilled widths given, true widths unknown). Approximately 1,100 m of historical drilling was completed on the property in 7 holes.

"The scale of anomalous gold values and accompanying alteration at Cynthia is hard to ignore," said Scott Berdahl, COO and Director of Snowline Gold Corp. "Given its proximity to our flagship Rogue project and its associated dataset, we have the opportunity to assess historical results at Cynthia in regional context and to advance exploration at relatively low cost. The mineralization itself lends further weight to our interpretation of the broader Rogue-Einarson area as a potential new gold district."

Snowline is reviewing the complete project portfolio it acquired from 18526 Yukon Inc. in late February 2021 and is focused on prioritizing exploration to maximize shareholder value. Specifically, it is examining multiple options for its non-core assets, including targeted exploration and joint venture arrangements.

The Cynthia property is located between two Cretaceous quartz monzonite stocks in a zone of variably folded and faulted, late Paleozoic Selwyn Basin passive margin sedimentary rocks. The two stocks are thought to be apophyses of a larger intrusion at depth. Adjacent sedimentary rocks have undergone intense hornfelsing, with abundant pyrite and pyrrhotite. 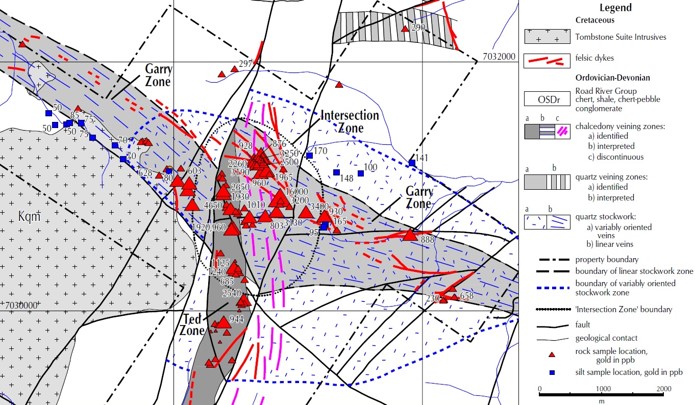 Two prominent structural zones intersect in the saddle zone between the intrusions. These structures host gold-bearing massive and drusy quartz veins. Within the intersection zone are zones of intense stockwork and strong brecciation, as well as numerous felsic dykes. Multi-staged gold mineralization in the quartz veins, stockwork and altered quartz porphyry dykes include sulphide minerals (mainly pyrite and arsenopyrite) and elevated As, Bi and Ag values. Abundant chalcedony accompanied by elevated Sb, Hg, Ag and Pb values has been variously interpreted by historical operators to represent a late-stage epithermal gold environment, or to represent an earlier sedex-style mineralizing event.

A program of geological mapping, historical core review, drone surveying and geochemical sampling is planned to put historical results in context and to establish a drilling strategy for the project. 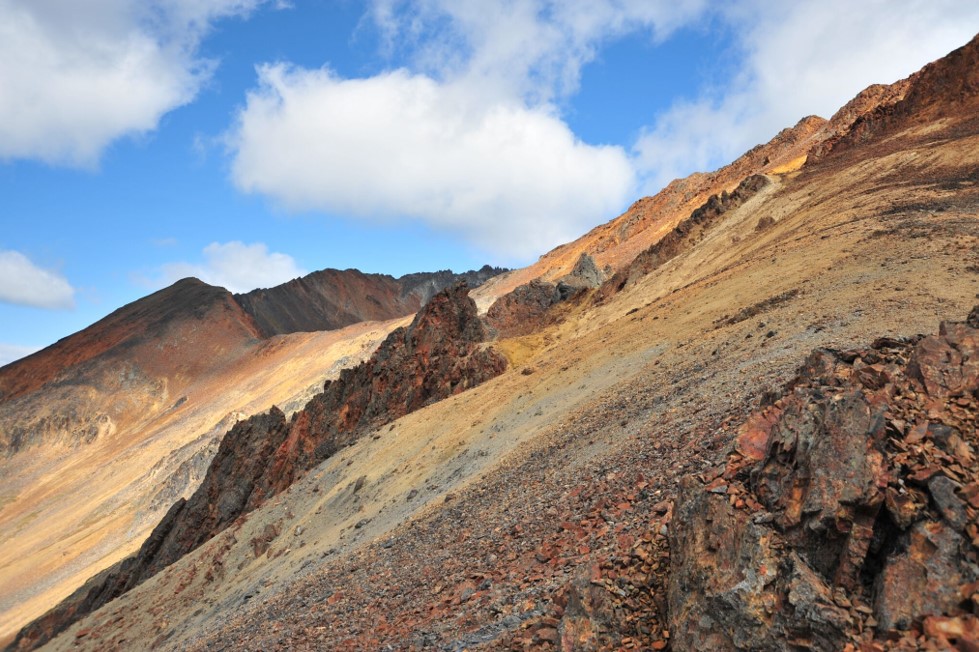 Figure 2: Kilometer-scale alteration at Cynthia associated with the oxidation of hornfels and mineralized zones.

The technical information contained in this news release is based primarily on historical data collected by previous operators that has not been directly verified by Snowline. It is believed to be reliable as an indicator of the Cynthia project's overall potential as an early-stage gold prospect. Note that rock grab samples are selective in nature and do not necessarily reflect overall grades of the mineralized system.

Information in this release has been reviewed and approved by Scott Berdahl, P. Geo., Chief Operating Officer of Snowline and a Qualified Person for the purpose of NI 43-101. Mr. Berdahl last visited the Cynthia property in July 2009.

Snowline Gold Corp. is a Yukon Territory focused gold exploration company with a 7-project portfolio covering over 70,000 ha. The Company is exploring its flagship 64,000 ha Einarson and Rogue gold projects in the prospective yet underexplored Selwyn Basin, with drilling expected to commence in mid-2021. Snowline's projects all lie in the prolific Tintina gold province that hosts multiple million-ounce-plus gold mines and deposits, from Kinross' Fort Knox mine to Newmont's Coffee deposit. Snowline's first mover claim position represents a unique opportunity to explore and expand a new greenfield, district-scale gold system.