VANCOUVER, BRITISH COLUMBIA TheNewswire – July 6, 2021 US Newrange Gold Corp. is pleased to announce that it has completed four PQ diamond core holes totaling 800.6 meters following up on reverse circulation hole P21-115, which intersected several high-grade structures assaying up to 22.35 grams gold per metric tonne within an overall intercept of 123.5 meters averaging 1.13 gt Au . All four holes are 25 to 35 meter …

All four core holes, P21-122 to 125, inclusive, intersected near surface, visually significant, oxide mineralization resembling that seen in hole P21-115, the Merritt zone and stopes on the 5428 level of the Pamlico Mine.  The mineralization, as seen in the drill holes, occurs over broad intervals ranging from 108 to 167 meters downhole (all holes drilled at -60°) and consists of anastomosing veins and veinlets of iron oxides, and brecciated quartz filled with iron oxides in strongly clay altered rhyolite to latite lithic tuff.  Importantly, the first core hole, P21-122, intersected a zone from 23 to 183 meters of iron oxide-filled brecciated quartz veins and veinlets and a 0.6 meter intercept of brecciated quartz with secondary copper minerals, including abundant chrysocolla and lesser amounts of azurite and malachite ( see photo below or here ).  A similar vein on the 5428 level assayed 5.62 g/t Au, 63.2 g/t Ag and 9790 parts per million copper (ppm Cu) or 0.98% Cu over 0.48 meters.  The 5428 vein is the only structure associated with gold mineralization in the Pamlico Mine known to contain chrysocolla or appreciable quantities of other copper minerals (see photo below or here ) .

“We are very encouraged by the four follow up holes on this new zone, and especially with the apparent correlation with the Pamlico Mine mineralization,” stated Robert Archer, Newrange CEO.  “While all assays are pending, the zone appears to be open to the north, east and south.  Once results have been received and compiled, we will be in a better position to interpret the potential and plan additional follow-up drilling.”

The 5428 level stopes are developed on a series of nearly flat to low angle, anastomosing veins and veinlets composed of iron oxide, and iron oxide-filled quartz breccias that form a halo around a single larger, semi-continuous and relatively flat lying brecciated quartz vein with abundant iron oxides and local concentrations of chrysocolla, azurite and malachite. The 11 samples taken by the Company on this level returned 0.29 to 10.35 g/t Au and 162 to 9790 ppm Cu over sample lengths ranging from 0.15 to 1.32 meters . 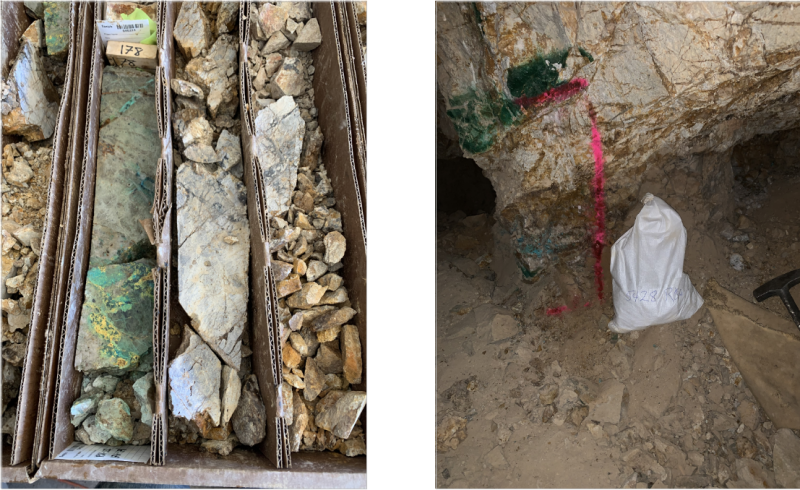 The area of new drilling is located approximately 85 meters east of the high-grade Merritt zone and 197 meters north-northeast of the closest accessible stopes on the 5428 level of the Pamlico Mine.   Observed core angles of structures in the zone indicate a strong sub-horizontal component much like that seen in many of the stopes in the Pamlico Mine. The copper-rich intercept in hole P21-122 is about 80 meters lower in elevation than the 5428 level, indicating this new zone to be a possible down-dropped extension of high-grade mineralization in the Pamlico Mine.

The copper-rich vein was not observed in holes P21-123 to 125 but the same overall style of mineralization and alteration is present to varying degrees in all holes.  The structure is complex and faulting is common, with much of the rock being extremely broken. Assays from the four follow-up holes are pending and, upon receipt, will allow for a better determination of the characteristics and trend(s) of the mineralization such that additional follow-up holes can be planned.

The Company is now in receipt of the final report on the recent expansion of the Induced Polarization (IP) survey.  As recently discovered gold-copper mineralization on surface (see Newrange news release of June 14, 2021) appears to be associated with a 5.5 by 3 kilometer IP anomaly, Newrange management now considers this to be a higher priority target than the ‘91’ zone or the ‘Line 5’ anomaly.  Consequently, the drill will be moving to this area next.

Mr. Robert G. Carrington, P. Geo, a Qualified Person as defined by National Instrument 43-101, the President and Chairman of the Company, has reviewed, verified and approved for disclosure the technical information contained in this news release.  All reverse circulation drilling was conducted using a five-inch diameter center return bit.  All drilling was supervised by professional geologists.  Samples were collected on 1.5 meter (5 foot) intervals.  Drill cuttings were captured in a vacuum augmented, closed system cyclone, then riffle split in a three-tiered Jones-type splitter.  All core reported in this release is PQ diameter core, drilled with “triple tube” split shells.  Core is logged and marked by professional geologists for sampling.  Core is then saw-cut along the marked sample lines with diamond saws.  Sludge from each identified sample interval is collected separately, flocculated, dried and split.  One half of the sludge is then combined with the one half of the core for assay, the other half of sludge is placed in a paper envelope and kept with the one half reference core for future work.  Samples are securely stored and delivered to Paragon Geochemical Laboratories in Sparks, Nevada for preparation and analysis.  Samples are dried then stage crushed to 80% passing 10 mesh.  A 300 gram sub-sample is then split out and pulverized to 90% passing 140 mesh from which 1 Assay Ton, approximately 30 gram samples are split for analysis by fire assay (FA) with an OES finish.  Samples assaying in excess of 5 g/t Au are re-assayed by fire assay with a gravimetric finish.  Silver was determined by fire assay with an atomic absorption finish.  In addition to the QA – QC conducted by the laboratory, the Company inserts blanks, duplicates, standards and certified reference material (CRM) at a rate of not less than 1 in 20.

Located 12 miles southeast of Hawthorne, Nevada, along US Highway 95, the project enjoys excellent access and infrastructure, a mild, year-round operating climate and strong political support from Mineral County, one of the most pro-mining counties in the pro-mining state of Nevada.  The Pamlico project covers the historic Pamlico group of mines, as well as the nearby Good Hope, Gold Bar and Sunset mines.  Discovered in 1884, the district rapidly gained a reputation as being one of Nevada’s highest-grade districts.  Held by private interests for most of its history, the property remains underexplored in terms of modern exploration.

Recent exploration by the Company has identified the potential for district-scale skarn and porphyry related mineralizing systems.

Newrange is focused on district-scale exploration for precious metals in favorable jurisdictions including Nevada, Ontario and Colorado. With locally high-grade, near surface oxide gold mineralization, the Company’s flagship Pamlico Project is poised to become a significant new Nevada discovery, while the North Birch Project offers additional blue-sky potential in the prolific Red Lake District.  Focused on developing shareholder value through exploration and development of key projects, the Company is committed to building sustainable value for all stakeholders.  Further information can be found on our website at www.newrangegold.com .

Neither the TSX Venture Exchange nor the Investment Industry Regulatory Organization of Canada accepts responsibility for the adequacy or accuracy of this release .

Some of the statements in this news release contain forward-looking information that involves inherent risk and uncertainty affecting the business of Newrange Gold Corp. Actual results may differ materially from those currently anticipated in such statements.