Investing News Network
Marvel Discovery Corp. is pleased announce that it has entered into a purchase agreement for two claim groups, located approximately 85 km northeast of Prince George, British ColumbiaThe properties are located within an approximately 40 km long belt of carbonatite and related rocks, including the Wicheeda Carbonatite - Rare Earth Element Project at the northwest end and the Cap Carbonatite - Rare Metal Project near ...

The properties are located within an approximately 40 km long belt of carbonatite and related rocks, including the Wicheeda Carbonatite - Rare Earth Element (REE) Project at the northwest end and the Cap Carbonatite - Rare Metal (RM) Project near the southeast end. The Wicheeda Rare Metal Belt (WRMB) covers a multitude of REE and RM bearing carbonatites and syenites that form as either elongate to elliptical or sub-circular bodies intruding Proterozoic and/or Paleozoic sedimentary rocks. No carbonatite occurrences have been documented on the Company's properties to date; however, the geology is considered favourable to host such mineralization styles associated with carbonatites.

Mr. Karim Rayani, President & Chief Executive Officer commented, "We are very excited to have acquired two separate property groups, each with potential to host rare metal mineralization, at a time when the world's need for green energy metals is growing at an ever-increasing rate. Coupled with our existing holdings, Marvel is now one of the largest landholders in the Wicheeda Rare Metal Belt."

Carbonatite-related rocks are exceptionally rare, with less than 700 complexes know worldwide. They are a major host for rare metals, such as niobium and tantalum, and rare earth elements (REE's), and are also known to host economic concentrations of copper, gold and other base metals. The world's largest niobium mine, Araxa in Brazil, and several of the world's largest rare earth element deposits, including Lynas Corporation's Mt. Weld deposit in Australia and MP Material's Mountain Pass Deposit in the United States, are all hosted by carbonatites.

The Wicheeda North Property, the main property of interest, consists of six mineral claims, which encompass 2135.6 ha, immediately northwest of the Wicheeda Property, which hosts the Wicheeda Carbonatite, currently being explored by Defense Metals Corp. This brings the company's total land holdings within the WRMB to just over 4,423.8 ha across a total of 18 claims.

The Wicheeda Carbonatite Deposit, held by Defense Metals Corp., is host to an indicated resource of 4.89 million tonnes (Mt) at 3.02% light rare earth oxide (LREO) and an inferred resource of 12.1 Mt at 2.90% LREO, using a cut-off grade of 1.5% total metal (see "Technical Report on the Wicheeda Property, British Columbia, Canada" with an Effective Date of June 27th, 2020). Management cautions that past results or discoveries on proximal properties (i.e. the Wicheeda Carbonatite Deposit) may not necessarily be indicative to the presence of mineralization on the Company's properties (i.e. Wicheeda North).

The property was originally acquired to cover a distinct, oval, aeromagnetic feature. The magnetic feature is flanked by two areas of above-background magnetics, indicating a complex magnetic environment, similar to that observed at Wicheeda. 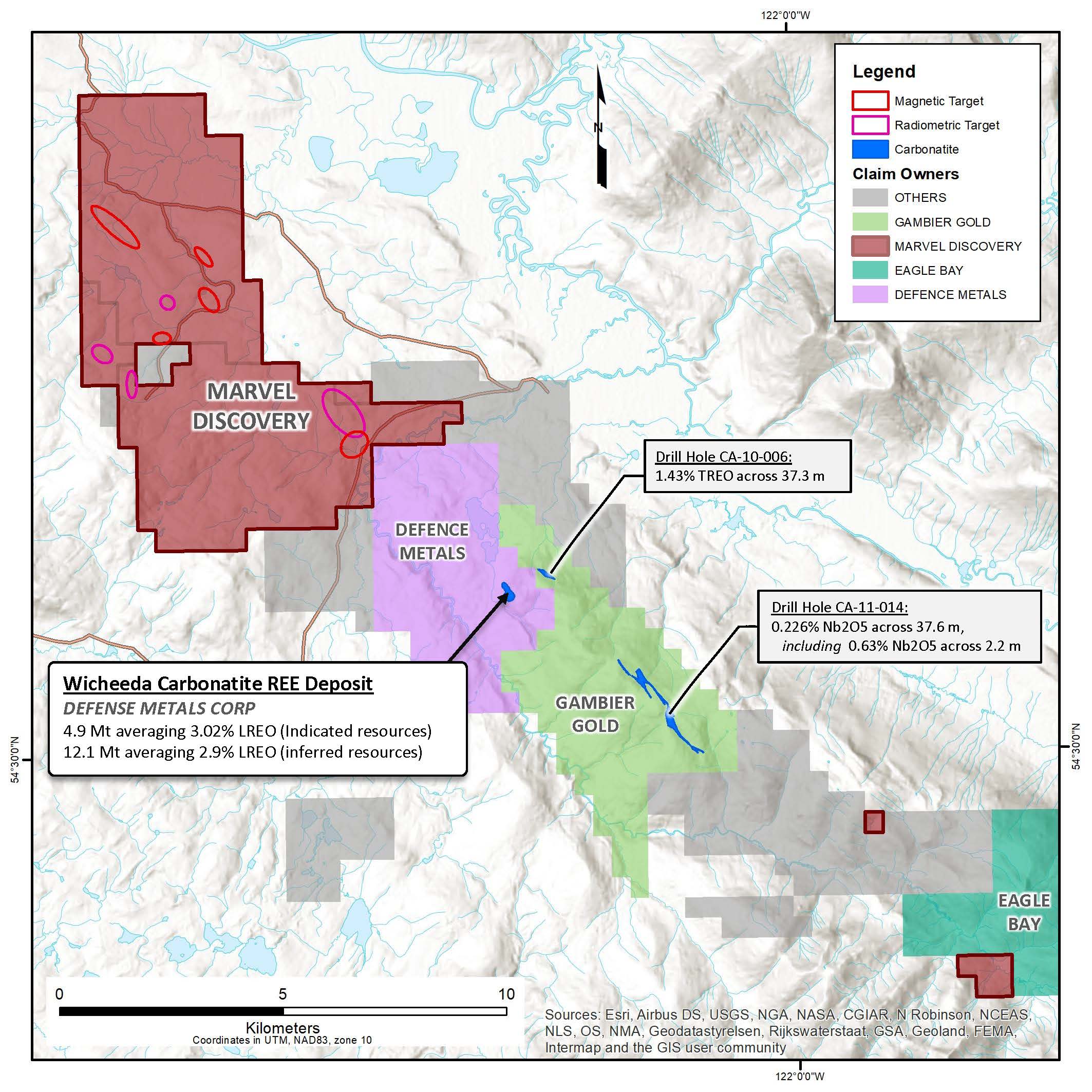 Two additional claims totaling about 113 ha, are located within the south-central parts of the WRMB.

The projects were acquired from Zimtu Capital Corp. and prospecting associates for a one-time cash payment of $22,500 for a 100% interest.

Within the USA, the recent announcement of $2 Trillion USD of green infrastructure spending and jobs plan will focus on modernizing and electrifying the US energy grid to handle modern electric vehicles that will result in a carbon-neutral economy by 2035. In order to facilitate this transition, a dramatic surge in demand for green energy metals and minerals will take place. These include light rare earth elements such as neodymium and praseodymium (used in the creation of permanent magnets), niobium, and copper. Marvel Discovery Corp. is actively positioning itself to ensure it is well placed to capitalize on this growing market.

Jody Dahrouge, P.Geo., of Dahrouge Geological Consulting Ltd. and a qualified person as defined by National Instrument 43-101, supervised the preparation of the technical information in this news release.

ON BEHALF OF THE BOARD
Marvel Discovery Corp.

Agnico Eagle Mines Limited (NYSE: AEM) (TSX: AEM) ("Agnico Eagle") today announced that, at the annual and special meeting of shareholders held on April 29, 2022 each of the 12 nominees listed in the management information circular dated March 21, 2022 were elected as directors of Agnico Eagle.

Detailed results of the vote are set out below:

Agnico Eagle Mines Limited (NYSE: AEM) (TSX: AEM) ("Agnico Eagle") today announced that, at the annual and special meeting of shareholders held on April 29, 2022 each of the 12 nominees listed in the management information circular dated March 21, 2022 were elected as directors of Agnico Eagle.

Detailed results of the vote are set out below:

It wasn't an easy week for gold, which pulled back after last week's run to nearly US$2,000 per ounce.

I had the chance to speak with Gareth Soloway of InTheMoneyStocks.com, who remains bullish on gold, but expects the precious metal to move down to US$1,825 to US$1,850 before breaking out much higher. While that might sound disheartening, Gareth sees this potential pullback as a "great opportunity" to accumulate more gold.

American Eagle Gold Corp. ( TSXV: AE ) (" American Eagle " or the " Company ") has completed its inaugural scout drill program located at its Golden Gate property, within the Cortez Trend and adjacent to Barrick's Goldrush mine. Drilling focused on the Northern Cortez (GG21-001) and Southern Cortez targets (GG21-002), located in the footwall of the Cortez Fault zone, 10km southeast of Barrick's Cortez Hills mine and 5km southwest of Barrick's Goldrush mine

While no significant gold mineralization was encountered, the Company is encouraged by having identified deep alteration analogous to Barrick Gold's Goldrush, Fourmile, and Cortez Hills projects next door. The drill core from GG21-001 was geologically logged in detail and photographed and sampled for gold and multi-element geochemical analysis. Drilling at hole GG21-002 was challenging due to difficult drilling conditions and supply chain issues. Despite the technical problems, the target concept for GG21-002 remains valid and requires full drill testing. Therefore, GG21-002 will be re-entered and deepened upon sourcing a reverse circulation rig to test for lower plate rocks and mineralization.