Marvel Discovery Corp. ; is pleased to announce an exploration update on its 100% owned Slip Project, located in Central Newfoundland. The Slip Project is located within 17 km of the Newfound Gold Queensway Project. An analysis of the regional magnetic data suggests the Slip Project lies within a similar structural setting as the New Found Gold’s Queensway Project making this project a high priority for Marvel. …

Marvel Discovery Corp. (TSXV:MARV)(FRA:O4T1)(OTCQB:MARVF); (“Marvel” or the “Company”) is pleased to announce an exploration update on its 100% owned Slip Project, located in Central Newfoundland. The Slip Project is located within 17 km of the Newfound Gold Queensway Project. An analysis of the regional magnetic data suggests the Slip Project lies within a similar structural setting as the New Found Gold’s Queensway Project making this project a high priority for Marvel. Recent exploration on the Slip Project has uncovered surface mineralization with grab samples as high as 44.5 gt Au and a detailed, systematic exploration program is now underway 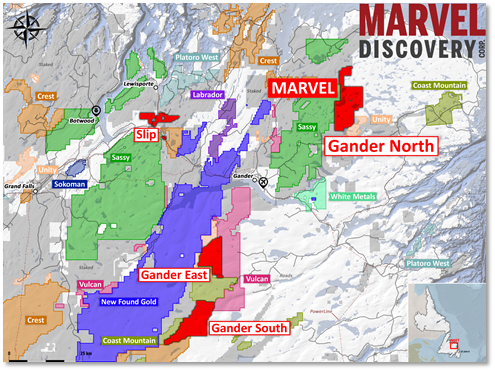 Marvel has contracted Balch Exploration Consulting Inc. (BECI) to conduct a high-resolution magnetic gradiometer survey. These survey results will allow for a detailed litho-structural analysis of the entire project area. BECI provides a state-of-art acquisition system with an airframe design based on a high drag principle to keep the sensors on-line and without the need for magnetic compensation resulting in the highest quality total magnetic intensity and gradiometer data. The survey will be flown along 100m spaced lines with a sensor height of 30m and sample intervals of 3-5m. Real-time differential GPS accuracy is accurate to within 3-5m, allowing for direct ground follow-up without the need for additional ground geophysics, which often requires line cutting.

Marvel has contracted Roland Quinlan of Edge Exploration, one of the most highly regarded and well-known prospectors in Newfoundland. Roland will begin a systematic prospecting program of the entire Slip property.

Marvel’s Chief Executive Officer Karim Rayani commented, “We are pleased to commence operations at Slip, completing the high-resolution survey will outline the structural features that we believe are present on the property. In addition, we were able to attract Roland Quinlan a local, high-profile and respected prospector of Edge Exploration, Newfoundland.”

Airborne magnetic data provide the means to interpret geologic structure and lithology variations in areas with little to no outcrop. In regions where basement outcrop is minimal and petrophysical contrasts exist between different geological units, the data can offer the potential to “see under cover” and their interpretation can minimize risk and vector exploration efforts to those areas of high merit in real-time. BECI is able to provide both raw and processed data on a daily basis, working closely with our ground team in their efforts to perform detailed target analysis.

The QP has not completed sufficient work to verify the historic information on the properties comprising the Hope Brook property, particularly regarding historical exploration, neighbouring companies, and government geological work. The information provides an indication of the exploration potential of the Property but may not be representative of expected results.