Investing News Network
December 1, 2021 - TheNewswire - Rouyn Noranda, Quebec - Granada Gold Mines Inc. is pleased to announce that it has engaged GoldSpot Discoveries Corp.  to apply their proprietary machine learning technology and geoscience expertise to the Granada Property in the Abitibi Greenstone Belt near Rouyn-Noranda, Quebec. The Granada property has a history of mining and exploration stretching back to the 1930s when it ...

The Granada property has a history of mining and exploration stretching back to the 1930s when it produced 51,476 oz Au.  Over the years the property has been drilled by multiple companies with over 120,000m drilled and Granada Gold has drilled 30,000m of an additional 120,000m to expand on the existing resource.

GoldSpot Discoveries will be working closely with the team at Granada to provide Smart Targeting for their ongoing drill program to help expand the existing resource as well as to provide additional exploration targets for new discoveries.  The property at Granada, including the existing open pits and the previous Granada Mine shafts, covers 1,473.77 ha over 2 km of strike length and the potential for strike length to be extended to 5.5 km stretching to the Aukeko and Austin Rouyn Mine Shafts to the east.

"We are very excited to be working with Granada Gold Mine Inc. on their project in the Abitibi.  GoldSpot has an extensive history working in the area and we look forward to building on our previous successes with the interesting and highly prospective project at Granada," c omments GoldSpot Chief Executive Officer, Vincent Dubé-Bourgeois. "The Granada project is on the verge of production and GoldSpot plans on helping Granada expand their existing resource to be able to mine well into the future."

Granada Gold Mine Inc. continues to develop and explore its 100% owned Granada Gold Property near Rouyn-Noranda, Quebec, adjacent to the prolific Cadillac Break. The Company owns 14.73 square kilometers of land in a combination of mining leases and claims. The company is currently undergoing a large drill program with 30,000m out of 120,000m complete. The drills are currently paused to provide the technical team with the necessary time to evaluate and assimilate existing data.

The updated resource at the Company's Granada Gold project in Rouyn-Noranda, Quebec was estimated by SGS Canada and outlined in a January 29, 2021 news release.  The final report was filed March 15, 2021 with an Effective date of December 15, 2020. The 43-101 Technical Report is titled: Granada Gold Project Mineral Resource Estimate Update, Rouyn-Noranda, Quebec, Canada authored by Yann Camus, P.Eng. and Maxime Dupéré, B.Sc, géo. Both of SGS Canada Inc.

The Company is in possession of all mining permits required to commence the initial mining phase, known as the "Rolling Start", which allows the company to mine up to 550 tonnes per day. Additional information is available at www.granadagoldmine.com . 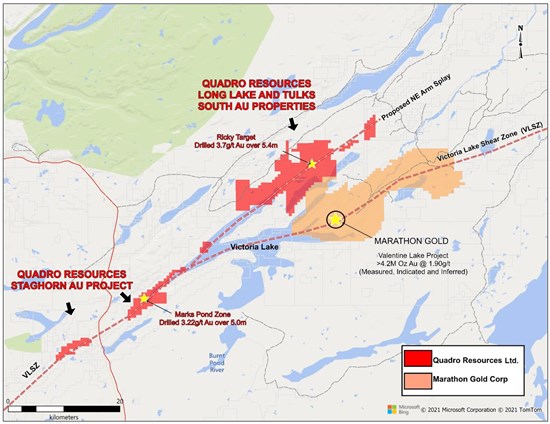