Historical Grab Samples Essayed Up To 126 GT Gold, And 1% Copper And 2 Metres Channel Sample Averaged 85 GT Gold, 51 GT Silver And Over 1% Copper TSXV:AUC), , is pleased to announce that it has signed an option agreement with Cazador Resources Ltd. to earn a 100 % interest in two properties known as “Big Frank” and “Nuit Mountain” . The projects are located in the western Chilcotin District of southwestern British …

TSXV:AUC), (Frankfurt:9FY), (the “Company” or “Goldplay”), is pleased to announce that it has signed an option agreement (the “Agreement”) with Cazador Resources Ltd. (“Cazador”) to earn a 100 % interest in two properties known as “Big Frank” and “Nuit Mountain” (together, the “Properties”). The projects are located in the western Chilcotin District of southwestern British Columbia (see Figure 1) and have district scale potential for both high-grade epithermal gold and copper-gold porphyry deposits. Further information on the transaction is detailed under “Terms of the Agreement” below

Catalin Kilofliski, Goldplay Mining President & CEO stated: “We are very excited about today’s announcement. Through this transaction, Goldplay has a unique opportunity to capitalize on the earlier work completed on the Properties and the potential to develop and control district scale projects and become a significant gold and copper-gold explorer in B.C. Given the encouraging historical results, an exploration crew has already been mobilized and intends to begin the initial work program on September 1st.”

The Big Frank Property (9,470.8 hectares) covers a 20-kilometre-long favourable geological trend and is located approximately 285 kilometres northwest of Vancouver or alternatively about 30 kilometres north of the head of Knight Inlet with logging roads occurring in the western portions of the property. Five principal target areas include:

The Nuit Mountain Property (2,448.8 hectares) covers an 8-kilometre-long alteration trend and is located 170 km southwest of Williams Lake or alternatively 75 kilometres east of the Big Frank Property (see Figures 1 & 2) and has road access to within four kilometers of the property. Exploration in the vicinity of the Nuit Mountain Property was prompted in the 1960’s by the sighting of large rusty gossans and at least seven documented copper and gold mineral showings (Niut Mountain, Down’s Showing, Fly, Harvey Gold, Fly Creek, Rusty and Anthony). Examples of know mineralization include a composite sample of well mineralized rocks collected in 1972 along the length of the Fly showing which averaged 0.677% copper over 200 m.

At Harvey Gold located 1,200 metres northeast of the Fly Showing, several historical samples were taken with the two best samples yielding 0.159 and 0.746 g/t gold with subdued copper. At an unnamed occurrence, quartz vein float, was found in 2006 within the main south-flowing creek on the property and returned 4.96 g/t gold. Much of the historical work at Nuit focused on the well exposed gossans along ridges but recent programs (>2007) obtained strong copper and gold geochemical results from heavily vegetated, and overburden covered slopes at lower elevations. The last field program completed in 2016 recommended additional work to follow up geophysical and geochemical targets, many of which received little or no systematic evaluation.(Sources: B.C Minfile and B.C Assessment Report 35815: Geochemical Sampling and Prospecting at the Buzz Property for Strategic Metals by A. Mitchell and H. Burrell, 2016).

Both the Nuit Mountain and Big Frank Properties exhibit widespread alteration, high-grade gold and copper-gold mineralization, and favorable geology trending over 8-20 km. They are both relatively underexplored and have seen no systematic or modern exploration within the last few decades whilst glacial retreat continues to make new exposures in the case of Big Frank. Previous exploration programs have discovered significant copper and gold values and recommended further work. The Company and Cazador recognize the potential for district scale mineralization in the area. Under the terms of the Agreement, Goldplay has agreed to incur $25,000 in expenditures on Nuit and $50,000 of expenditures on Big Frank on or before December 31, 2021 with the intention of preparing NI 43-101 technical reports on both Properties.

Upon completion of all commitments Goldplay will own 100% of the Properties. Goldplay has the option to acquire either Big Frank or Nuit or to acquire both Properties concurrently or successively. Cazador Resources Ltd. will retain a 2 % NSR on each Property half buyable for $5M each. Advance royalty payments of $25K a year for Nuit Mountain and $50K a year for Big Frank will become due starting in Year 5. The Agreement is subject to acceptance by the TSX Venture Exchange. 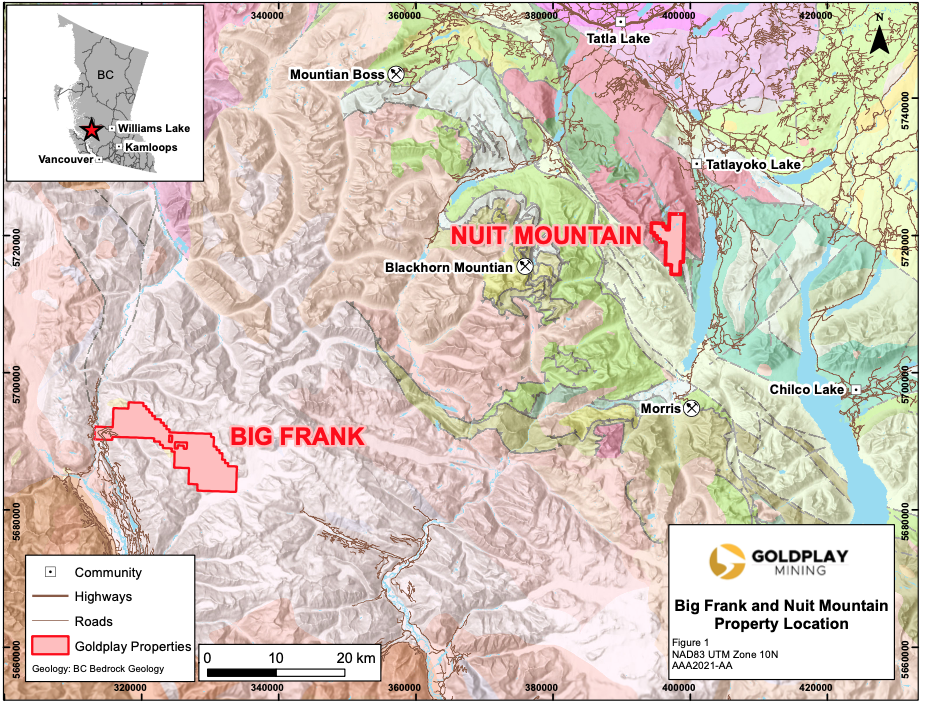 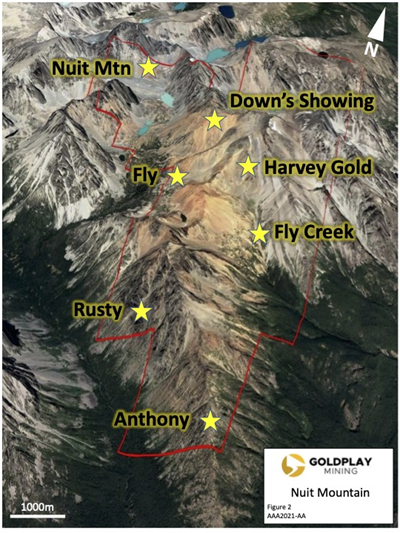 The scientific and technical information has been reviewed and approved by Mr. Andrew Wilkins, Goldplay’s BC Exploration Manager and Qualified Person within the context of Canadian Securities Administrators’ National Instrument 43-101 – Standards of Disclosure for Mineral Projects. The information in this news release contains historical results and is speculative in nature as very little recent ground work has been done to date on the Properties.

Goldplay Mining is a newly listed Canadian public company which is focused on exploring and advancing gold-copper projects located in top mining jurisdictions with potential for world class mineral discovery.

This news release contains “forward-looking information” within the meaning of applicable securities laws relating to the exploration potential of the Properties. Generally forward-looking statements can be identified by the use of terminology such as “anticipate”, “will”, “expect”, “may”, “continue”, “could”, “estimate”, “forecast”, “plan”, “potential” and similar expressions. These forward-looking statements involve risks and uncertainties relating to, among other things, the lack of recent exploration work on the Properties, results of future exploration and development activities, uninsured risks, regulatory changes, defects in title, availability of materials and equipment, timeliness of government approvals, changes in commodity prices and unanticipated environmental impacts on operations. Although the Company believes current conditions and expected future developments and other factors that have been considered are appropriate and that the expectations reflected in this forward-looking information are reasonable, undue reliance should not be placed on them because the Company can give no assurance that they will prove to be correct or enduring. Readers are cautioned to not place undue reliance on forward-looking information. The statements in this press release are made as of the date of this release. Except as required by law, the Company does not undertake any obligation to update publicly or to revise any forward-looking statements that are contained or incorporated in this press release. All forward-looking statements contained in this press release are expressly qualified by this cautionary statement.