Cache Exploration Inc. is pleased to announce that the Company has completed the definitive agreement to acquire a 100% option on the Marmot Precious Metals Project located in the Golden Triangle British Columbia, Canada and held by Granby Gold Corp an arms-length private company. CEO of Cache Exploration Inc., Jack Bal states “Minerals explorers are piling up into British Columbia’s Golden Trangle with serveral …

Cache Exploration Inc. (the “Company” or “Cache” ) (TSXV: CAY) is pleased to announce that the Company has completed the definitive agreement to acquire a 100% option on the Marmot Precious Metals Project ( “Marmot” the “Property” or the “Project” ) located in the Golden Triangle British Columbia, Canada and held by Granby Gold Corp ( “Granby” ), an arms-length private company. 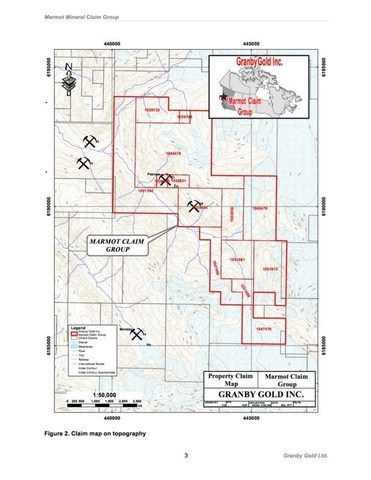 CEO of Cache Exploration Inc., Jack Bal states “Minerals explorers are piling up into British Columbia’s Golden Trangle , with serveral companies showing massive discovery potential.The Marmot project covers over 4000 hectares and has over 10 minfile references, including the past producer Montana (Ag, Au, Cu, Pb, Zn) mine. The Company will mobilize a work program as soon as the weather allows. We are very excited to be involved in such a promising project”

Granby will retain a 2% royalty with the Company retaining the right to acquire 50% of the Royalty (equal to a 1% net smelter return royalty) for a cash payment of $1,000,000 .

Both the Unuk River and Salmon River Members of the Lower to MiddIe Jurassic Hazelton Group are present on the Property.  Voluminous resistant volcanic and associated volcaniclastic strata predominate in the area. The youngest volcanic members are bimodal, consisting mainly of basalt and rhyolite. Middle to Upper Jurassic Bowser Lake Group clastic rocks that conformably overlie the Hazelton Group may also be present.

The Eskay Creek mine of Skeena Resources Ltd. (formerly of Barrick Gold Corporation) is an extremely rich and profitable Au-Ag deposit near the northern end of the belt. The Eskay Creek deposit is interpreted to have formed in an environment transitional between subaqueous hot springs and exhalative volcanogenic massive sulfide (VMS), and the geologic setting for the deposits similar to that of the Property. ‘Transitional’ Eskay Creek-type deposits are models for exploration on the Property.

The regional metallogenic picture of the Iskut-Anyox belt suggests that potential also exists on the Property for the occurrence of other mineralization types. These include more typical VMS mineralization, possible ‘transitional-type’ mineralization variously interpreted as veins or exhalative, both Ag-rich, precious and base metal veins, porphyry-related and shear-hosted mineralization.

Four mineral showings, four prospects, and one past-producer are located within the survey area (MinFile records).

A helicopter-borne magnetics and radiometrics survey was flown over the mineral tenements during September 2018 by Granby . The objective was the interpretation of the airborne geophysical data to identify targets with response indicative of VMS style mineralization. The geophysical signature of the known occurrences was used as an analogue for identification of new targets. The geophysical survey covered an area of approximately 30.6km2 on flight lines oriented at 040° azimuth at 100m intervals, and orthogonal control lines at 1000m intervals, for a total of 337 line-kilometres.

Two magnetic targets are of particular interest, as they are within the prospective Hazelton Group mixed volcanics and sedimentary sequence, and display a strong, isolated magnetic signature. What distinguishes these two targets is the relatively low Koenigsberger ratio indicative of low magnetic remanence, which suggests a different age of emplacement or subsequent alteration. One pair of spatially related potassium and magnetic anomalies fits the classical VMS geophysical exploration model (M-02 and K-05) and is specifically recommended for further work. Other isolated and discordant potassium anomalies are generally recommended for ground truthing.

Mr. Locke Goldsmith , P. Geo is a Qualified Person in accordance with National Instrument 43-101 – Standards of Disclosure for Mineral Projects .  Mr. Goldsmith has reviewed and approved the scientific and technical content of this news release pertaining to the Marmot Project.

Cache is a gold focused Company that holds and operates the Kiyuk Lake Property which covers 590km2 in SW Nunavut: the project features a number of gold bearing prospects including 2017 identification of 8m of 26.4 g/t gold at the Rusty Zone and extensive mineralization at East Gold Point with 64 m at 1.5 g/t gold and 10 m at 6.5 g/t gold. Extensive surficial float evidence indicates a series of high-interest gold systems (see www.cacheexploration.com/CAY-NR-10-26-17 to view plan maps of Rusty Zone and East Gold Point, section showing select KI17-004 and -005 drill results and Maps of rock and till sampling results).

This news release may contain certain “Forward-Looking Statements” within the meaning of the United States Private Securities Litigation Reform Act of 1995 and applicable Canadian securities laws.  When used in this news release, the words “anticipate”, “believe”, “estimate”, “expect”, “target, “plan”, “forecast”, “may”, “schedule” and other similar words or expressions identify forward-looking statements or information.  These forward-looking statements or information may relate to the status of the Annual Filings and the Interim Filings, the anticipated completion of these filings, and other factors or information.  Such statements represent the Company’s current views with respect to future events and are necessarily based upon a number of assumptions and estimates that, while considered reasonable by the Company, are inherently subject to significant business, economic, competitive, political and social risks, contingencies and uncertainties.  Many factors, both known and unknown, could cause results, performance, or achievements to be materially different from the results, performance or achievements that are or may be expressed or implied by such forward-looking statements.  The Company does not intend, and does not assume any obligation, to update these forward-looking statements or information to reflect changes in assumptions or changes in circumstances or any other events affections such statements and information other than as required by applicable laws, rules and regulations.