Avrupa Minerals Ltd. is pleased to announce that the Company will start a 7,000 to 8,000 meter diamond drilling program at the Alvalade Project in October, 2020. The program will test the Sesmarias copper-zinc massive sulfide discovery along strike to both the north and south, as well as the Monte da Bela Vista stockwork zone, located approximately nine kilometers north of Sesmarias. The Company will also drill at a …

Avrupa Minerals Ltd. (TSXV:AVU) (OTC: AVPMF) is pleased to announce that the Company will start a 7,000 to 8,000 meter diamond drilling program at the Alvalade Project in October, 2020. The program will test the Sesmarias copper-zinc massive sulfide discovery along strike to both the north and south, as well as the Monte da Bela Vista stockwork zone, located approximately nine kilometers north of Sesmarias. The Company will also drill at a number of other attractive massive sulfide targets around the 115-square kilometer license during the early stages of the program

In addition to the drilling, an airborne electromagnetic survey will be conducted later this year on the northern half of the Alvalade License. Results from this program will assist in delineating further massive sulfide targets in the license area between Sesmarias and the historic Canal Caveira massive sulfide deposit located at the north end of the license. 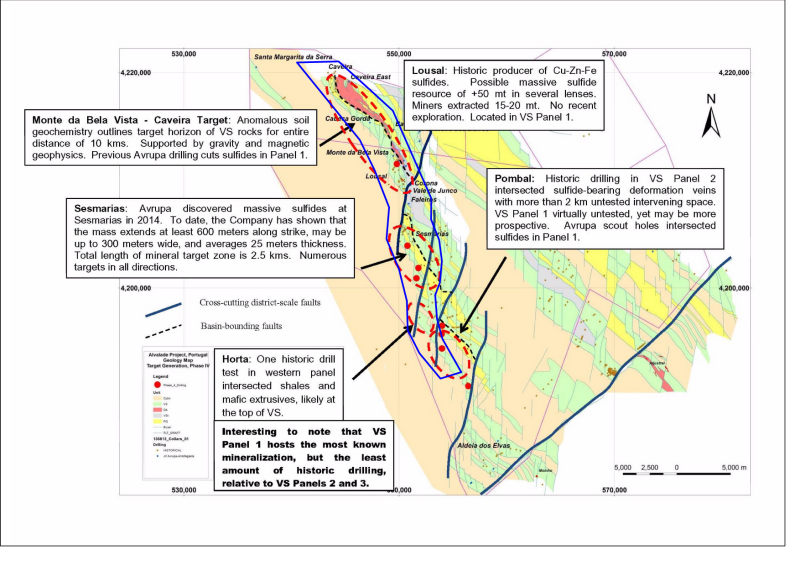 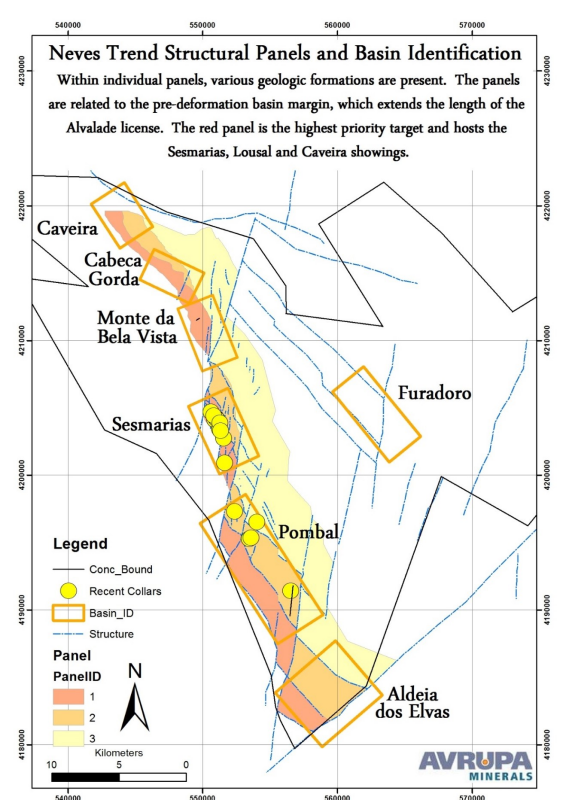 Figures 1 and 2. The Alvalade Experimental Exploitation license covers at least five target basin areas, each with numerous potential drill target setup locations. Sesmarias has seen the most recent work due to Avrupa’s copper- and zinc-bearing massive sulfide discovery in 2014. Other areas, including Monte da Bela Vista, Lousal, and Caveira. still need first-and second-pass, discovery-oriented drilling. Airborne geophysics will cover the license from the Caveira Mine in the north to the south end of the Sesmarias zone.

The planned work program is fully funded by Minas de Aguas Tenidas, S.A. (“MATSA”). MATSA can initially earn a 51% interest in the Alvalade Experimental Exploitation License property by completing funding requirements set out in the joint venture agreement between the companies. MATSA may then increase their interest in the Project to 85% by preparing a bankable feasibility study. Avrupa previously described the details of the agreement in news releases dated October 1, 2019 and November 20, 2019 .

The Joint Venture exploration team will also commence with a thorough compilation and detailed study of the historic Lousal Mine data with the expectation of delineating new, previously untested targets close to and within the old mine workings’ area. The Lousal Mine is located 1.5 kilometers south of Monte da Bela Vista, and about seven kilometers north of Sesmarias, but separated by a major fault zone. Geologically, it is possible that the Sesmarias and Lousal massive sulfide lenses were originally part of the same deposit more than 360 million years ago when Pyrite Belt mineralization formed, but movement along the later fault system separated the zones.

Avrupa previously acquired a large amount of data for the Lousal Mine which was digitized, but not fully compiled. During 2018, the Company performed a basic review of the data, including a partial collection of annual mine production reports from 1900 to 1988. The reports suggested that miners extracted upwards of 15-20 million metric tonnes of copper-, zinc-, and iron-bearing massive sulfide material from a number of lenses in the Lousal Mine. Several publicly-available reports and studies (all non-compliant with resource estimation regulations and reporting, as outlined in National Instrument 43-101) state that pre-mining, the original lenses may have contained over 50 million metric tonnes of mineralized material.

Paul W. Kuhn, President and CEO of Avrupa Minerals, commented, “We are truly excited about starting the drill program at Sesmarias and elsewhere within the Alvalade License, along with the wide-scale airborne geophysical survey. The survey will start with orientation work over the Sesmarias discovery, and we will use that information to look for similar readings in other parts of the license helping to identify additional drill targets. Compilation of the Lousal data will not only help with detailed targeting around the mine, but also with advancing our robust exploration model for the Pyrite Belt, leading to further discovery of copper and zinc mineralization around the license.”

In continued deference to the COVID-19 pandemic, all efforts to maintain a healthy, safe, and sustainable working environment will continue to be first and foremost priority at the Project facilities and in the field.

Minas de Aguas Tenidas, S.A. (MATSA) is a private Spanish mining company, which owns and operates three mines in the province of Huelva (Andalusia, Spain): Aguas Tenidas, Magdalena, and Sotiel. MATSA also holds 1,312 km 2 of exploration permits in the south of Spain and 1,106 km 2 in Portugal. Focused on innovation and the most advanced technology to develop modern and sustainable mines, MATSA is a 50:50 joint venture company of Mubadala Investment Company, a sovereign investor managing a global portfolio aimed at generating sustainable returns for its shareholder, the Government of Abu Dhabi, and Trafigura, one of the world’s leading commodity trading houses.

Avrupa Minerals Ltd. is a growth-oriented junior exploration and development company directed to discovery of mineral deposits, using a hybrid prospect generator business model. The Company holds one 100%-owned license in Portugal, the Alvalade VMS Project, now optioned to MATSA in an earn-in joint venture agreement. Avrupa focuses its project generation work in politically stable and prospective regions of Europe, presently including Portugal and Kosovo. The Company continues to seek and develop other opportunities around Europe.

This news release was prepared by Company management, who take full responsibility for its content. Paul W. Kuhn, President and CEO of Avrupa Minerals, a Licensed Professional Geologist and a Registered Member of the Society of Mining Engineers, is a Qualified Person as defined by National Instrument 43-101 of the Canadian Securities Administrators. He has reviewed the technical disclosure in this release. Mr. Kuhn, the QP, has not only reviewed, but prepared and supervised the preparation or approval of the scientific and technical content in the news release. Comments concerning resource estimates at the historic Lousal Mine are taken from publicly-available reports and studies, but are in no way compliant with resource definition regulations outlined in National Instrument 43-101. Neither TSX Venture Exchange nor its Regulation Services Provider (as that term is defined in the policies of the TSX Venture Exchange) accepts responsibility for the adequacy or accuracy of this release.