Investing News Network
Marvel Discovery Corp. ; is pleased to announce the company has formed a strategic partnership with Falcon Gold Corp. with the goal of exploring prospective claims recently acquired in the Hope Brook and Baie Verte Brompton Districts. The combined total of both projects covers 115,17 hectares and will be explored together on 50-50 Joint Venture basis. This Alliance further empowers Marvel and Falcon to work together ...

Marvel Discovery Corp. (TSXV:MARV)(Frankfurt:O4T1)(OTCQB:MARVF); (the "Company") is pleased to announce the company has formed a strategic partnership with Falcon Gold Corp. ("Falcon") with the goal of exploring prospective claims recently acquired in the Hope Brook and Baie Verte Brompton Districts. The combined total of both projects covers 115,17 hectares and will be explored together on 50-50 Joint Venture basis. This Alliance further empowers Marvel and Falcon to work together sharing in the potential upside of this impressive land package while reducing costs and capital. The Hope Brook Project will be renamed the Golden Brook JV ("the Property

Chief Executive Officer, Karim Rayani commented, "This alliance between Marvel and Falcon provides numerous upside potential to both companies. Synergies of shared capital, administration costs and common goals utilizing various exploration and vectoring tools won't be hampered by a property boundary line. This will enable the partnership to systematically explore this ground with a common goal of a Tier 1 discovery."

The Golden Brook JV lies at the northern western edge of the Hermitage Flexure, a predominant geological feature of the south Newfoundland Appalachians. The western Hermitage Flexure is a structurally complex region with a diverse metal breakdown. The structures on the property are linked to west verging thrust faults namely the Bay D'Est Fault Zone and the Gunlap Fault zone. These types of fault zones can be gold bearing evidenced by the most significant gold deposit in the area, the Hope Brook gold mine, which was in production from 1987 to 1997 producing 752,163 ounces of gold. The Hope Brook now owned by First Mining has since been optioned to Big Ridge Exploration which has outlined an additional 6.33 million tonnes at an average grade of 4.68 grams per tonne Au for 954,000 ounces of gold in the indicated and inferred categories (https://bigridgegold.com/projects/hope-brook-gold-project-newfoundland/). 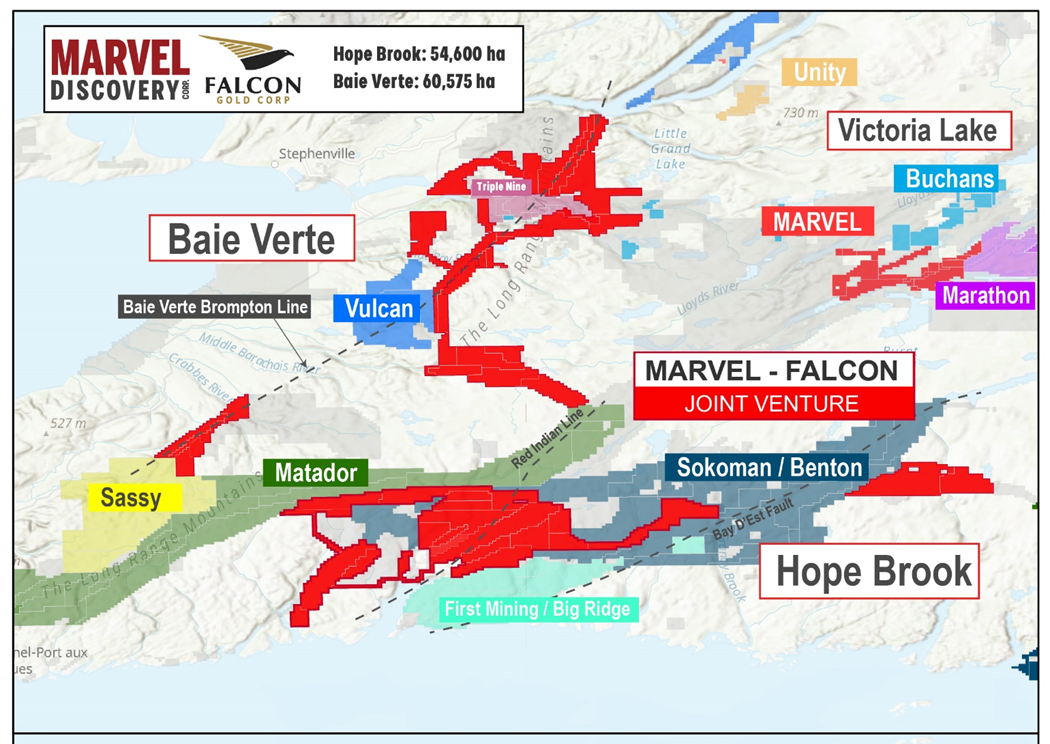 The Golden Brook JV will also straddle both the eastern and western extents of recent land acquisitions by the Benton-Sokoman JV (joint venture) partnership. Benton-Sokoman made recent headlines with the discovery of the first lithium pegmatite discovery less 400 meters from the company's newly expanded property boundary. The highly prospective ground held by Marvel shows various lithium clusters that may extend onto the company's ground.

Other land positions within the Golden Brook JV include ground along the Baie Verte Brompton Line (BVBL). The BVBL project is strategically located in a peninsula that hosts all of Newfoundland's current gold production. Producing mines include Anaconda Mining Inc.'s Point Rousse gold mine and Rambler Metals Mining operations. Former producing mines include the Terra Nova mine and deposits of the Rambler mining camp. All of these mines are in close proximity to the BVBL. There are more than 100 gold prospects and zones, many of which are orogenic-style, related to major splays and related second-order structures linked to the BVBL. The Matador Mining Ltd. Cape Ray Project reporting 837,000 ounces of gold is also proximal to the BVBL (https://matadormining.com.au/cape-ray/resource/). The Marvel-Falcon partnership now control ground over a 70-kilometer corridor along the BVBL.

The QP and the Company has not completed sufficient work to verify the historic information on the properties comprising the Golden Brook JV, particularly regarding historical exploration, neighbouring companies, and government geological work.

Kirkland Lake Gold Ltd. (" Kirkland Lake Gold " or the " Company ") (TSX:KL) (NYSE:KL) (ASX:KLA) today reported that the Company has been advised by the Environmental Protection Authority ("EPA") Victoria of the Victorian Government that the EPA has determined that low-level frequency noise (in the range of 16-20 Hz) is being emitted by the Fosterville Mine.

The EPA has provided the Company with a Notice to Investigate and an Improvement Notice focused on the low-level frequency noise which it believes is emanating from the mine. Included within the notices are stated timelines covering a period of just over two months for investigating and resolving the issue of low-frequency noise as well as reporting to the EPA on modifications introduced and new testing completed. In addition, the EPA has indicated to the Company that additional action may be taken by the EPA that could result in restrictions on the use of certain equipment, primarily surface ventilation fans and surface drill rigs in the south portion of the mining lease, during the night, while the remediation period is completed. The potential impact of such measures on the Fosterville operations, should they be introduced, is currently being investigated.

Management at Fosterville has been aware of concerns expressed by residents in recent months regarding low-level frequency noise and has taken steps to evaluate and address these concerns. As part of these efforts, Fosterville commissioned two independent studies on noise levels produced by the mine. The studies were completed by accredited noise and acoustic specialist firms based in Australia, with both studies concluding that all mine generated noise was within regulatory limits.

Kalgoorlie Gold Mining (ASX:KAL) ('KalGold' or 'the Company') is pleased to advise that the Company's first drill program has intersected gold at its lead project, Bulong Taurus, 35km to the east of Kalgoorlie- Boulder. Two targets were tested, La Mascotte and Great Ophir, with shallow oxide gold confirmed at both.

To get significant gold intersections, including bedrock mineralisation, on every line drilled to date at Sir Laurence is exceptional. To date these cover a strike length of 1km and mineralisation is open in all directions. Some of our best results, such as 2m @ 1.6 g/t Au from 76m in KGA067O, have been at the end of drill lines and therefore there remains a lot of additional drilling required before the limits of mineralisation are defined. We now look forward to seeing what the diamond core drilling intersects and anticipate initial results before Christmas. We also look forward to the assay results from the remainder of the Sir Laurence holes and the regional holes."

Prodigy Gold NL (ASX: PRX) ('Prodigy Gold' or the 'Company')'Company') is pleased to announce progress results from diamond drilling on its projects in the Northern Territory.

Alberta, Canada (ABN Newswire) - Join Ellis Martin for a conversation with Brodie Sutherland, the Vice President of Exploration for TOCVAN Ventures Corp (CNSX:TOC) (FRA:TV3) trading in on the CSE as TOC, in the US as TCVNF and in Frankfurt as TV3.

TOCVAN Ventures is an early-stage natural resource company formed to acquire, explore and, for economic and shareholder interests, develop mineral properties. The company has three projects under development: the Pilar Gold Project and the El Picacho Gold Property in the gold-producing Sonora Region of Mexico, and the Rogers Creek Property in the Lillooet Mining District of Southwestern British Columbia. In this interview, Mr. Sutherland updates our audience on both the Pilar and El Picacho Projects.

To listen to the Interview, please visit:
https://www.abnnewswire.net/press/en/108242/toc

TOCVAN Ventures Corp. (CNSX:TOC) (FRA:TV3) was created to take advantage of the prolonged downturn the junior mining exploration sector, by identifying and negotiating interest in opportunities where management feels they can build upon previous success.

TOCVAN Ventures currently has approximately 24.5 million shares outstanding and is earning into two exciting opportunities. The Pilar Gold project in the Sonora State of Mexico and the Rogers Creek project in Southern British Columbia, which Management feels both projects represent tremendous opportunity.

Whitehorse Gold Corp. (TSXV: WHG) ("Whitehorse Gold" or the "Company") has appointed Gordon Neal as the CEO and a director of the Company.

Mr. Neal has extensive experience in the metals and mining sector, capital markets, and government communications. He was most recently the president of New Pacific Metals Corp., and was the former vice-president corporate development at Silvercorp Metals Inc. Prior to that, he held the vice-president corporate development position at Mag Silver Corp. Mr. Neal's career also saw him working in the office of the Prime Minister of Canada as a senior communications adviser.