Spey Resources Corp. (CSE: SPEY) (OTC PINK: SPEYF) (FRA: 2JS) ("Spey" or the "Company") announces that it has accepted a quotation from Amaru Mining Services and preparations are being made to commence drilling at the Incahuasi Salar, Argentina in the next three weeks. The drilling will take place in the locations shown below: 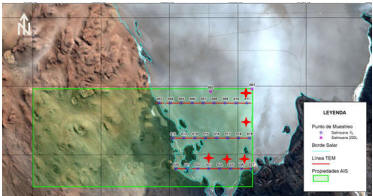 To view an enhanced version of Figure 1, please visit:
https://orders.newsfilecorp.com/files/6150/90719_spey.h2.jpg

The five drill holes at Incahuasi will cover a depth of approximately 600m. When completed, the rig will move to the Pocitos 1 and 2 concession on the Pocitos Salar approximately 120km away and drill three holes on the targeted aquifer locations. A double packer device will sample the brines at depth and be assayed. Preparations are currently being made for the camp, fuel and roads.

Nader Vatanchi CEO commented, "We are making great progress at Incahuasi Salar, with geophysics completed, the road in good condition and easy access. Amaru, our drillers are very familiar with the salar and are completing their preparations. Our bulk brine surface samples from Incahuasi Salar have been sent to the University of Melbourne to be processed. The state of the art Ekosolve™ process handles very high levels of magnesium so we are looking forward to the results of the processing using their laboratory scale plant and samples of lithium carbonate. At Pocitos Salar, we have the results of surface sampling and geophysics completed on Pocitos 2 and drilling completed close by on Pocitos 1 by AIS Resources. The project drill team have nearly completed all their preparations. I'm delighted with the progress our team has made and look forward to the brine analysis results from drilling and University of Melbourne."

Phillip Thomas, BSc Geol, MBusM, FAusIMM, MAIG, MAIMVA, (CMV), a Qualified Person as defined under NI 43-101 regulations, has reviewed the technical information that forms the basis for portions of this news release, and has approved the disclosure herein. Mr. Thomas is independent of the Company but discloses that he is a shareholder of SPEY.

Cautionary Note Regarding Forward-Looking Statements: Certain disclosure in this release may constitute "forward-looking information" within the meaning of Canadian securities legislation. In making the forward-looking statements in this release, the Company has applied certain factors and assumptions that the Company believes are reasonable. However, the forward-looking statements in this release, including without limitation, statements pertaining to the future exercise of the Agreement to acquire an interest in the Property, the Company's exploration programs and the Company's mineral property development plans, are subject to numerous risks, uncertainties and other factors that may cause future results to differ materially from those expressed or implied in such forward-looking statements. Such uncertainties and risks include, without limitation, financing risks, delays in obtaining or inability to obtain required regulatory approvals, legislative, environmental and other judicial, regulatory, political or competitive developments, exploration and operational difficulties, the timing of future business expenditures, the potential of the Company's mineral properties and changes in economic conditions or financial markets. There can be no assurance that such statements will prove to be accurate, and actual results and future events could differ materially from those anticipated in such statements. Readers are cautioned not to place undue reliance on forward-looking statements. The Company does not intend, and expressly disclaims any intention or obligation to, update or revise any forward-looking statements whether as a result of new information, future events or otherwise, except as required by law.

The Canadian Securities Exchange has neither approved nor disapproved the contents of this press release.

To view the source version of this press release, please visit https://www.newsfilecorp.com/release/90719

SIGNIFICANT EXTENSION TO RESOURCE ALONG STRIKE AND DOWN DIP

Hard-rock lithium explorer and developer Winsome Resources Limited (ASX: WR1; “Winsome” or “the Company”) is pleased to announce its exploration partner, Technominex, is well advanced with the stripping, sampling and mapping of the main pegmatite dyke at the Company’s flagship Cancet Project in Quebec, Canada.

Latin Resources Limited (ASX: LRS) (“Latin” or “the Company”) is pleased to announce the appointment of SGS Geological Services, Canada (“SGS”) to commence and manage a Preliminary Economic Assessment (“PEA”) on the Company’s Colina prospect, a part of the larger Salinas Lithium Project (“Project”), located in the pro-mining district of Minas Gerais in southeast Brazil (Figure 1 and Figure 2).

Critical Resources Limited (ASX:CRR) (“Critical Resources” or “the Company”) is pleased to announce further results from its latest drilling campaign at the Company’s 100 per cent-owned Mavis Lake Lithium Project (“the Project”) in Ontario, Canada.

You can also click here to read the previous top lithium stocks article.

Lithium prices hit an all-time high in 2021 and continued that trend into 2022. Although prices have cooled slightly from their peak in March, they're still sitting near historic levels.

May and June were interesting months for lithium. At the end of May, Goldman Sachs (NYSE:GS) made an oversupply call that took many market watchers by surprise. Additionally, the Fastmarkets Lithium Supply and Raw Materials conference took place at the end of June, with panels on topics like geopolitics and global demand.

Here the Investing News Network takes a look at the top lithium stocks with year-to-date gains. The list below was generated using TradingView’s stock screener on July 11, 2022, for Canadian companies, and July 13, 2022, for US and Australian companies. It includes companies listed on the NYSE, NASDAQ, TSX, TSXV and ASX; all top lithium stocks had market caps above $10 million when data was gathered.

Alpha Lithium Corporation (TSXV: ALLI) (OTC: APHLF) (Germany WKN: A3CUW1) ("Alpha" or the "Company") is pleased to announce that it has received conditional approval from one of Canada's senior exchanges, the NEO Exchange, to list its common shares (the "Shares") and certain warrants (the "Warrants") for trading.

Upon uplisting to the NEO Exchange, the Company will delist from the Canadian TMX Group's venture exchange, the TSXV. Trading of the Company's securities will not be disrupted in any way.