Tarku Resources Ltd is pleased to provide an update on the geophysical survey results of its two wholly-owned Projects, Atlas and Apollo, in the Matagami area, Eeyou Istchee James Bay, Quebec. A 750 line-km geophysical High-resolution magnetic and time-domain electromagnetic survey was completed partly over the Apollo, and Atlas Projects. Additionally, Tarku’s recent ground IP survey along the regional Rivière …

Tarku Resources Ltd (TSXV:TKU)(FRA:7TK)(OTCQB:TRKUF) (the “Company” or “Tarku”) is pleased to provide an update on the geophysical survey results of its two wholly-owned Projects, Atlas and Apollo, in the Matagami area, Eeyou Istchee James Bay, Quebec. A 750 line-km geophysical High-resolution magnetic (MAG) and time-domain electromagnetic (TDEM) survey was completed partly over the Apollo, and Atlas Projects. Additionally, Tarku’s recent ground IP survey along the regional Rivière Waswanipi shear zone reaffirms the strong gold and base metal mineralization similarities with the geological context found at the Detour Lake Mine and the Kirkland Lake Mining Camp

Julien Davy, President, and CEO of Tarku stated, “our recent geophysical surveys reinforce our understanding of the source of the gold and base metals and provides us with specific targets for a drill program. Both Apollo and Atlas projects are 100% owned by Tarku and follow two different geological environments with two different exploration models. Apollo, to the north, follows an Orogenic Gold model, similar to Kirkland Lake, here we are looking for the high Mag anomalies that we believe to be related to intrusions, and the Mag surveys illustrated this well. Atlas Project, to the south, seems to follow a Gold-rich VMS model similar to LaRonde Mine, where the geological environment of interest is related to the contact between the volcanic rock and the sedimentary rocks what the TDEM survey also illustrated well.”

In May 2021, Tarku completed a 750 line-km combined magnetic (MAG) and time-domain electromagnetic (TDEM) helicopter-borne survey over the main targeted areas of the Apollo and Atlas projects. Flight lines were surveyed at a 100-metre spacing and were conducted by Prospectair (Gatineau, Quebec) and Dynamic Discovery Geoscience (Ottawa, Ontario) aided in interpretation of the mineralized systems and identified new gold and base metals targets within the favourable zone.

On Apollo, the preliminary analysis of the MAG and TDEM survey clearly demonstrated the extension of the Rivière Waswanipi Shear zone to the east and the west, and all reported metallotects present a favourable setting for Orogenic gold mineralization associated with alkaline rocks and porphyry intrusions, which Tarku interprets as being similar in nature to those of the regional Sunday Lake Fault, host of the Detour Lake mine or the Kirkland Lake Mining Camp. As previously described, Tarku’s 2017 till sampling program identified a 6-km wide favourable zone along the regional Rivière Waswanipi shear zone (RWSZ) that may be the source of the gold grains sampled (see press release dated April 10th, 2019).

On Atlas, preliminary interpretations of the MAG and TDEM survey also demonstrated the continuity of the contact between the calc-alkaline intermediate to felsic volcaniclastic (tuff) sequence with the sedimentary rocks, indicating a favourable context for Gold-rich Volcanogenic massive sulphides (Au-Zn-Ag-Cu VMS). The survey also allowed Tarku to identify crosscutting structures where the magnetic pattern abruptly disappears or is displaced. 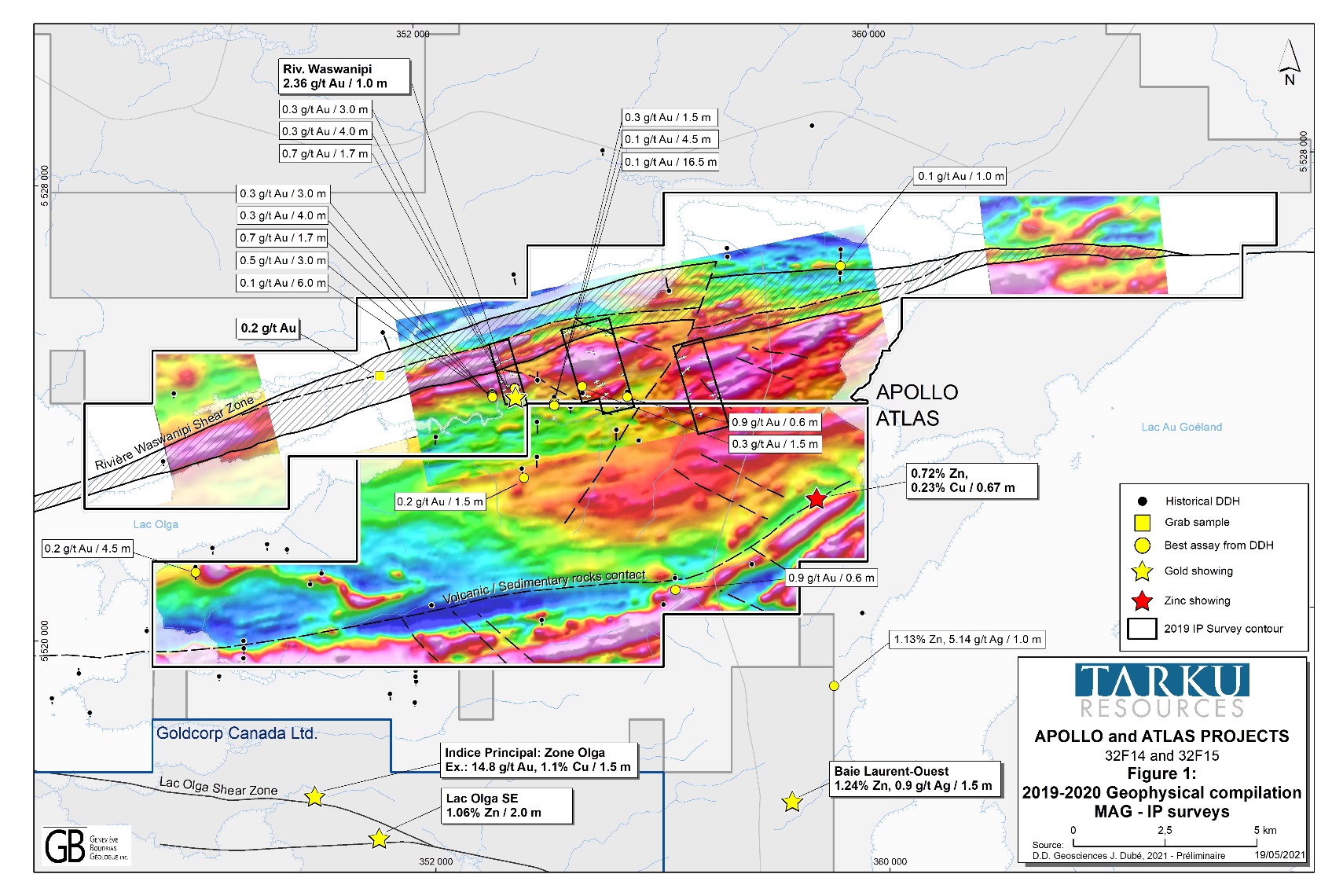 Gold VMS mineralization, theorized by the Company to be associated with the volcanic/sediments contact (on the Atlas project), responded well in the survey and these structural features will allow Tarku to generate new targets which may have promoted the formation of mineral deposits containing gold and other metals of interest. This environment is a similar context to the Indice principale, Olga Zone deposit on Goldcorp Canada’s Lac Olga project, adjacent to the south of the Atlas Project and TDEM surveys have been used extensively and successfully to aid in identifying Gold VMS targets like Agnico Eagle’s LaRonde Mine. On Apollo, potential Orogenic gold mineralization in interpreted fault systems and shear zones will become priority targets for further field exploration.

Tarku cautions that the comparison of mineralization found at the Detour Lake mine, the Kirkland Lake mining Camp or at the LaRonde Mine may not be indicative of the mineralization that may be identified on the Company’s Matagami projects and the comparison is used as a conceptual exploration model only. 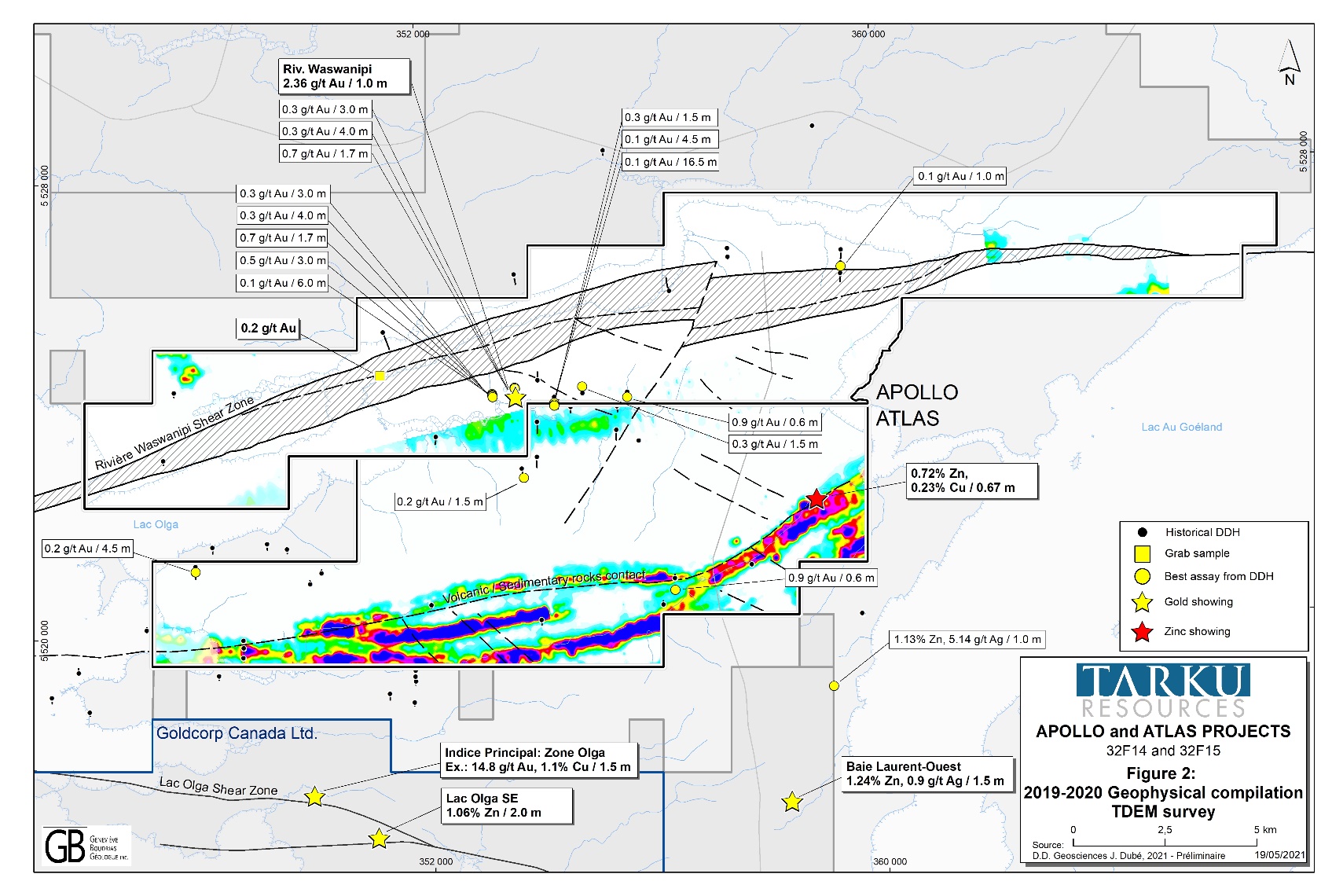 Tarku is an exploration company focused on new discoveries in favourable mining jurisdictions such as Quebec and Arizona. In Quebec, Tarku owns 100% of the “Three A‘s” exploration projects, (Apollo, Admiral, and Atlas Projects), in the Matagami Greenstone belt, which has been interpreted by management as the eastern extension of the Detour Belt, and which has seen recent exploration successes by Midland Exploration Inc., Wallbridge Mining Company Ltd., Probe Metals Inc. In Arizona, in the Tombstone district, Tarku owns the option to acquire 75% on 20km2 in the Silver Strike Project.

This press release may contain forward-looking statements that are subject to known and unknown risks and uncertainties that could cause actual results and activities to vary materially from targeted results and planning. Such risks and uncertainties include those described in Tarku’s periodic reports including the annual report or in the filings made by Tarku from time to time with securities regulatory authorities.

Tarku Resources CEO: Unexpected High-grade Drill Results from a Historically Rich Silver Zone
The Economics of Restarting a Past-producing Mine
Tarku Resources: Exploration and Development of Precious and Base Metals in Quebec and the USA
Tarku Announces an up to $700,000 Private Placement and a Share Consolidation