Figure 1 – Drill section showing holes J-21-010 to J-21-013, with gold assays represented as yellow bar plots downhole. A preliminary schematic interpretation suggests mineralized zones (red) dip roughly east-northeast, though this basic interpretation is unlikely to capture structural complexity suggested by fold and fault structures observed in drill core, and the continuity between holes remains to be seen. Hole J-21-012 was drilled towards the viewer and is truncated where it pierces 50 m in front of section. It was only assayed in a few select intervals below this point. Hole J-21-013 projects slightly backwards from the section. True widths of reported intersections are not yet known but are expected to be between 50 to >90% of reported intervals.

Hole J-21-010 intersected extensive gold mineralization, including five distinct gold zones with grades above 8.9 g/t Au, to a maximum of 31.1 g/t Au over 1.5 m in quartz at the base of an interval of mineralized mudstone (Figure 3). Averaging all gold values from surface to the base observed mineralization, including unmineralized intervals and assuming no gold content in the top 6.5 m of overburden and unsampled material, yields 1.17 g/t Au over 185 m.

Hole J-21-012 was thought to be mostly barren due to a paucity of gold-associated minerals and was only partially sampled. Limited sampling, however, returned a zone of 13.9 g/t Au over 6.0 m, including 45.0 g/t Au over 1.5 m of altered mudstones cut by quartz-carbonate veins (Figure 4).

Hole J-21-013 was drilled towards the east, away from the target area and surface geochemical anomaly. However, it too hit extensive gold mineralization, including a 27.0 m interval averaging 2.59 g/t Au and a separate interval of 13.8 g/t Au over 2.5 m (Figure 5). 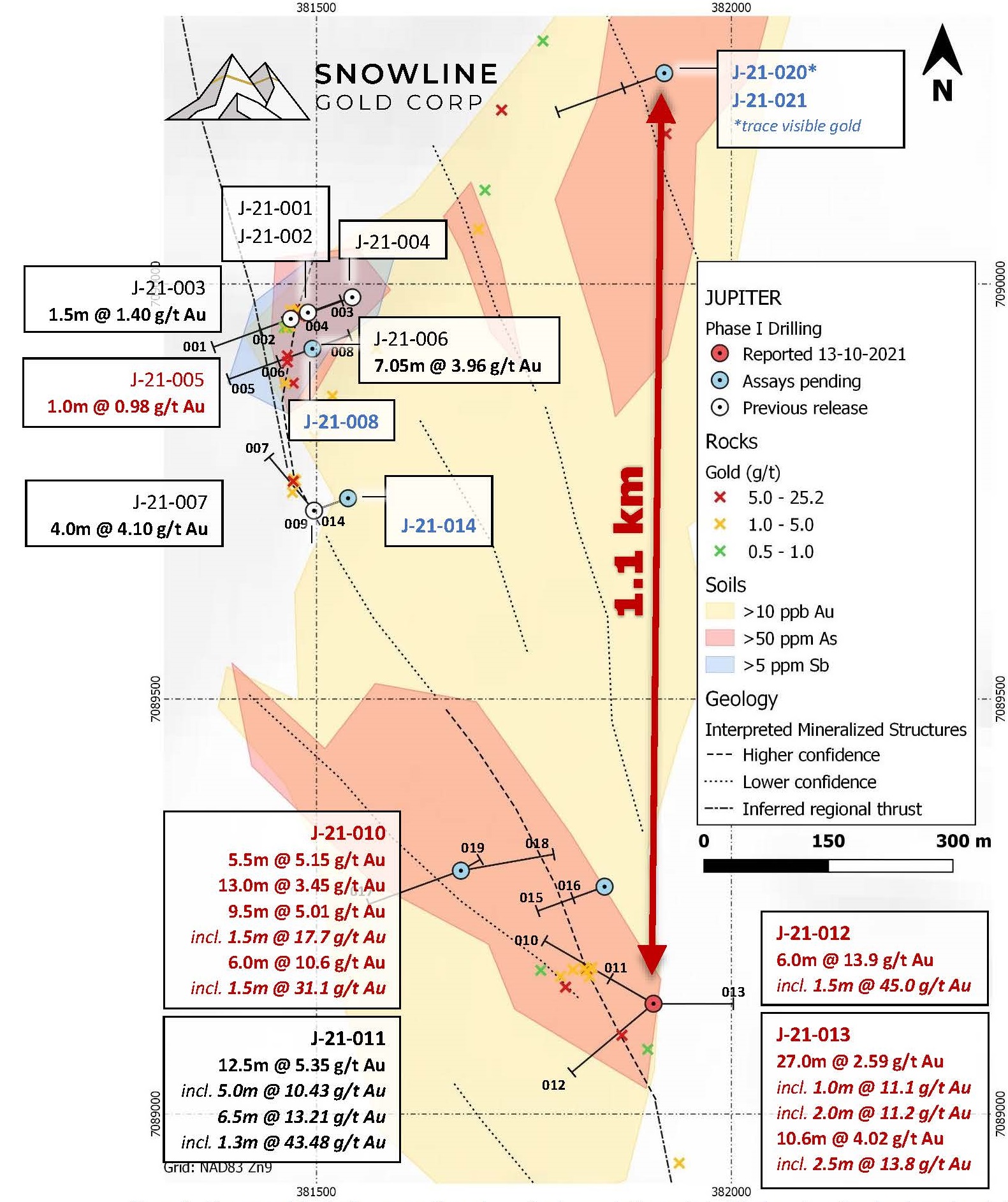 Figure 2 – Plan map of the Jupiter zone with newly received assays in the context of the broader soil and rock geochemical anomaly. Holes are labelled with significant assay results received to date. Results for nine holes are still pending. Collar sites are shown as circles with drill traces shown as solid black lines. Snowline’s 2021 drill campaign is the first ever drill testing of the recently identified Jupiter zone on the district-scale Einarson gold project.

Figure 3 – Visually unimpressive core from J-21-010 returned impressive grades. The 6 m interval shown from 179 m to 185 m downhole averaged 10.6 g/t Au in altered Narchilla formation siltstones with disseminated arsenopyrite. The final 1.5 m from 183.5 m to 185 m downhole, which has a larger quartz component and likely pierces a fold hinge, returned 31.1 g/t Au. True widths are not known but based on core angles are estimated at 70-90% of downhole intervals for this section.

Figure 4 – Hole J-21-012 lacked the gold-associated mineral arsenopyrite but did not lack gold. The 6-metre interval from 50 to 56 m downhole averaged 13.9 g/t Au, including 1.5 metres of 45.0 g/t Au from 54.5 m hosted largely in altered siltstones. The lack of arsenopyrite is an encouraging sign from a metallurgical standpoint. True width of this interval is not known but is estimated at 70 to 90% or more of the downhole interval.

Figure 5 – Gold bearing fold hinges in J-21-013. The 2.5 m interval from 128.5 m to 131.0 m downhole averaged 13.8 g/t Au, near the base of a 10.6 m interval averaging 4.02 g/t Au. The true width and the overall geometry of this intercept is not known, but it is estimated to be between 50-70% of the downhole interval. This image was shown in a previous Snowline release (August 25, 2021) as evidence of promising mineralization observed visually in forthcoming holes. The company eagerly awaits results from additional promising holes that have assays pending.

At Jupiter, anomalous gold concentrations are found in and around fault zones, in local fold hinges, in quartz veins and disseminated within sulphide-bearing mudstones of the Narchilla Formation. Gold is commonly associated with acicular to fine grained “sooty” arsenopyrite and varying amounts of pyrite, though it is also observed in quartz carbonate veins with low sulphide content and as rare instances of native gold. Multiple vein generations demonstrate that multiple fluid events affected the rocks. Gold mineralization usually occurs within larger zones of clay alteration that partially bleach the colours of the host mudstones. A distinct olive-green coloured clay alteration is associated with many mineralized zones. The diversity in styles and settings of gold mineralization along with host-rock alteration observed over more than a kilometer are evidence of a large, fertile hydrothermal fluid system that readily deposited gold.

Jupiter likely represents an epizonal orogenic gold system. It is one of ten target zones prospective for orogenic and/or Carlin-style gold mineralization currently recognized on Snowline Gold‘s 70%-owned, district-scale Einarson project. Adjacent projects Rogue and Ursa are prospective for intrusion-related gold, and sediment-hosted gold and base metal deposits. No resources nor reserves have been estimated for any of these targets, and while current results are encouraging, they do not guarantee that economically viable ore bodies will be encountered at Jupiter or elsewhere. Readers are cautioned that without assay results, the true significance of the intersections reported herein is uncertain.

The Company awaits assay information on an additional nine holes from Jupiter, including J-21-020 which contained visible gold, and other holes with encouraging zones of alteration, quartz-carbonate veins and/or sulphide mineralization.

In addition to the remaining drillhole results from the Jupiter zone, the company also awaits assay information for its four holes drilled at the Valley zone on the nearby Rogue project. All four holes at Valley intersected trace amounts of visible gold in drill core. Valley is a reduced-intrusion related gold target following a bulk-tonnage exploration model. Gold is hosted in large networks of centimetre-scale sheeted quartz veins within and around a felsic intrusion.

In hole V-21-001, sheeted quartz veins were observed across its 161 m length. Thirty-one of the many veins observed in this hole contained trace amounts of visible gold, with up to five gold grains in a given vein. Visible-gold bearing veins were distributed roughly evenly across the length of the hole.

On receipt from the drill site, drill core was systematically logged for geological attributes, photographed and sampled. Smaller sample lengths were used to isolate zones of interest, otherwise a default 1.5 m downhole sample length was used. The holes in this release were not sampled top to bottom. Core was cut in half lengthwise, with one half collected for analysis and one half stored as a record. Standard reference materials, blanks and duplicate samples were inserted by Snowline personnel at regular intervals into the sample stream. Bagged samples were sealed with security tags to ensure integrity during transport. They were delivered by expeditor and by Snowline personnel to ALS Laboratories’ preparatory facility in Whitehorse, Yukon, with analysis completed in Vancouver.

ALS is accredited to ISO 17025:2005 UKAS ref 4028 for its laboratory analysis. Samples were crushed by ALS to >70% passing below 2 mm and split using a riffle splitter. 250 g splits were pulverized to >85% passing below 75 microns. An aqua regia digest with an inductively coupled plasma mass spectroscopy (ICP-MS) finish was used for 51-element analysis on 50 g samples (ALS code: Au-ME-TL44). Any sample returning >50 ppb Au was re-analysed for gold content by fire assay with an inductively coupled plasma atomic emission spectroscopy (ICP-AES) finish on 30 g samples (ALS code: Au-ICP21). Over-limit samples of >10 g/t Au were analyzed by fire assay with a gravimetric finish again on a 30 g sample (ALS code: Au-GRA21). Where more than one gold assay exists for a sample, assays reported herein prioritize these methods in reverse order.

Snowline Gold Corp. is a Yukon Territory focused gold exploration company with a seven-project portfolio covering >106,000 ha. The Company is exploring its flagship 72,000 ha Einarson and Rogue gold projects in the highly prospective yet underexplored Selwyn Basin. Snowline’s project portfolio sits within the prolific Tintina Gold Province, host to multiple million-ounce-plus gold mines and deposits including Kinross’ Fort Knox mine, Newmont’s Coffee deposit, and Victoria Gold’s Eagle Mine. Snowline’s first-mover land position provides a unique opportunity for investors to be part of multiple discoveries and the creation of a new gold district.

This news release contains certain forward-looking statements, including statements about the Company reviewing its newly acquired project portfolio to maximize value, reviewing options for its non-core assets, including targeted exploration and joint venture arrangements, conducting follow-up prospecting and mapping this summer and plans for exploring and expanding a new greenfield, district-scale gold system. Wherever possible, words such as “may”, “will”, “should”, “could”, “expect”, “plan”, “intend”, “anticipate”, “believe”, “estimate”, “predict” or “potential” or the negative or other variations of these words, or similar words or phrases, have been used to identify these forward-looking statements. These statements reflect management’s current beliefs and are based on information currently available to management as at the date hereof.