SNOWLINE GOLD CORP. (CSE:SGD)(OTCQB:SNWGF) (the "Company" or "Snowline") is pleased to announce additional results from its ongoing Phase I drilling of the Jupiter Zone on its district-scale Einarson project in the Yukon Territory, Canada. Two distinct intervals of high-grade gold (>10 gt Au, with assays up to 63.9 gt Au) in hole J-21-011 indicate the discovery of a robust in-situ gold system. Key results from hole J-21-011 are summarized in Table 1 below

Table 1 - Significant mineralized intervals in J-21-011. Intervals are uncapped, with the highest assay value returning 63.9 g/t Au over 0.3 m from 160.5 m downhole. The "From surface" result includes non-assayed intervals on the base assumption they carry no gold. Applying a 25 g/t Au cap to reduce influence of highest grades yields 1.00 g/t over the same 163.5 m.

*True widths are not yet known and are estimated to be from 50-90% of reported intervals.

"Assay results from hole 11 confirm the discovery of a sizeable gold system at Jupiter," said Scott Berdahl, CEO and Director of Snowline. "Initially we patted ourselves on the backs for hitting mineralization consistently with our first holes on a blind target. But now, with evidence of the system in 19 for 19 holes over 930 m lateral extent-including mineralization in holes off-trend and a hole drilled directly away from our "target"-we may have simply discovered a gold system that is tough to miss. What excites us even more is that Jupiter is the first of many targets left to test on our Einarson, Rogue and Ursa projects. It's a successful proof-of-concept in what we believe to be a previously unrecognized and unexplored gold district." 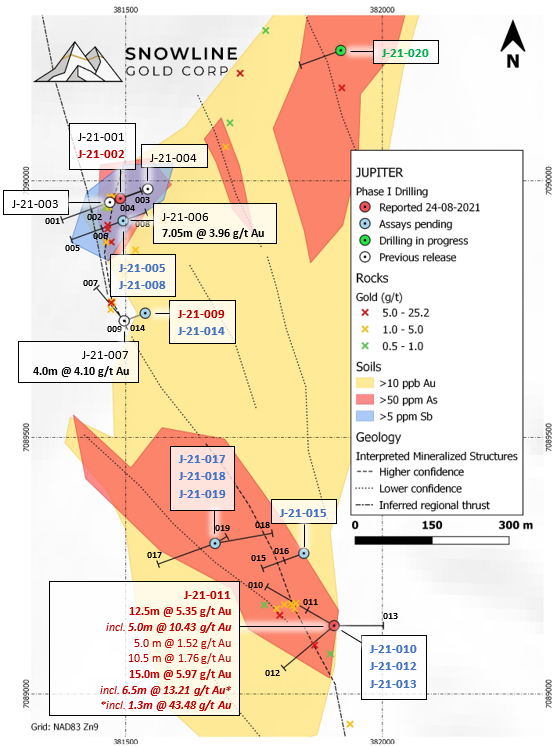 Hole J-21-011 represents a 710-metre step-out along trend from earlier holes at Jupiter (see Figure 1 and Snowline Gold's July 27, 2021 news release). It was drilled on a pad along with J-21-010, 012 and 013, for which assays are still pending. Mineralization occurs in and around quartz-carbonate veins, breccias and possibly quartz-flooded fold hinges in deformed siltstones of the Selwyn Basin's Narchilla formation (Figures 2 and 3). Gold values are associated with fine-grained sooty-looking to acicular arsenopyrite occurring as patches, disseminations and stylolites in quartz, with metres-scale zones of disseminated arsenopyrite and up to tens of metres of disseminated pyrite in clay-altered wall rock.

Drilling to date has tested parts of a 930 m area that is open in length, breadth and depth within a 3 km area of elevated to anomalous gold in soils. Assay results are still pending for holes J-21-005, 8, 10, 12, 13, 14, 15, 16 and 17, and select highlight photos are herein shown as Figures 5-7. Additional results from holes J-21-002 and J-21-009 have been received and are reported in Table 2. The final Phase I holes at Jupiter will test anomalous soil geochemistry and quartz float to the north of other targets, 460 m from any previous hole and roughly 1.1 km from J-21-011. Optical, acoustic and induced polarization downhole surveys are planned this season prior to closing holes to better constrain structural and lithological controls on mineralization.

Jupiter is thought to represent an epizonal orogenic gold system. It is one of nine target zones prospective for orogenic and/or Carlin-style gold mineralization currently recognized on Snowline Gold's 70%-owned, district-scale Einarson project. No resources nor reserves have been calculated on any Einarson property targets, and while current results are encouraging, they do not guarantee that economically viable ore bodies will be encountered at Jupiter or elsewhere on the project. 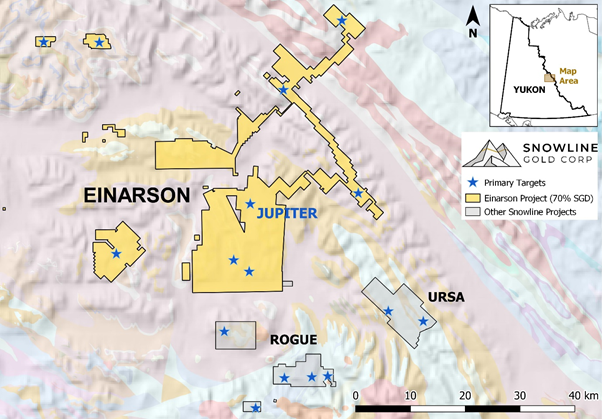 **Not all assays have been received for these two holes, but based on visual inspection of the core, outstanding assays on J-21-002 and J-21-009 are not expected to produce significant results.

The following Figures 5, 6 and 7 are visual highlights from ongoing Phase I drilling at Jupiter. While assays for these zones are pending and thus gold values are not yet known, the Company is encouraged by large zones of arsenopyrite-bearing quartz and mineralized wall rock that are qualitatively similar to mineralized zones in J-21-011. 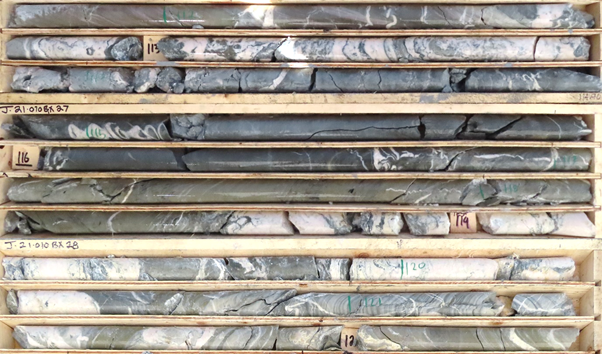 Figure 5 - J-21-010, drilled from the same pad as J-21-011, also intersected wide zones of mineralized quartz veining and breccia, with patches of pyrite and arsenopyrite-bearing stylolites. View shown is from roughly 111.5 m to 122.5 m downhole. Assays for this hole are pending.

Figure 6 - J-21-013 was also drilled from the same pad as J-21-011 but drilled directly to the east away from what had previously been considered the target trend. This suggests the presence of multiple mineralized features along the primary trend at Jupiter. Note the circular feature at approximately 128.6 m, which demonstrated quartz flooding in a small fold nose. Blue numbers on core indicate As content in parts per million (except where indicated in percent, to a maximum of 2%) as determined locally and semi-quantitatively by handheld XRF. View shown is from roughly 127.4 to 134.8 m downhole. Assays for this hole are pending.

Figure 7 - J-21-015, collared 153m north of J-21-011 (see Figure 1), intersected a strongly mineralized quartz breccia vein nearly perpendicular to core across 2.95 m, with fine to acicular arsenopyrite mineralization in disseminations and along stylolites. View shown is from roughly 118.0 m to 124.2 m downhole. Assays for this hole are pending.

Grades reported herein are uncut except where specified. Split samples of NQ2 diamond drill core were sealed with tamper-proof labels and delivered by Snowline staff or expeditor to ALS Geochemistry in Whitehorse, Yukon. Fifty-gram pulps were processed using aqua regia digestion, with 30 g pulps submitted for fire assay on any sample assaying above 50 parts per billion gold. Both streams were analysed using ICP-MS. Overlimit samples for gold (>10 g/t Au) were processed by fire assay with gravimetric finish. Blanks, quarter-core duplicates and certified reference standards are submitted every 20 samples to monitor assay reliability.

Snowline Gold Corp. is a Yukon Territory focused gold exploration company with a seven-project portfolio covering >90,000 ha. The Company is exploring its flagship 72,000 ha Einarson and Rogue gold projects in the highly gold prospective yet underexplored Selwyn Basin. Snowline's project portfolio is within the prolific Tintina Gold Province that hosts multiple million-ounce-plus gold mines and deposits, such as Kinross' Fort Knox mine, Newmont's Coffee deposit, and Victoria Gold's Eagle Mine. Snowline's first-mover land position provides a unique opportunity for investors to be part of multiple discoveries and the creation of a new gold district.

Yamana Gold Inc. (TSX:YRI; NYSE:AUY; LSE:AUY) ("Yamana" or the "Company") is pleased to announce that at a special meeting of shareholders held earlier today ("the Meeting"), Yamana shareholders voted overwhelmingly in favour of the special resolution (the "Arrangement Resolution") approving the previously announced acquisition by Pan American Silver Corp. ("Pan American") of all of the issued and outstanding common shares of the Company following the sale by Yamana of its Canadian assets, including certain subsidiaries and partnerships which hold Yamana's interests in the Canadian Malartic mine, to Agnico Eagle Mines Limited ("Agnico Eagle"), all by way of a plan of arrangement under the Canada Business Corporations Act (the "Proposed Transaction").