Granada Gold Mine Inc.  is pleased to provide an updated High-Grade Mineral Resource Estimate of the Granada Gold Deposit using narrow, rich, vein modelling and both open pit and underground resources and revised pit optimization parameters which are based on the possibility of off-site custom milling ore rather than constructing and using an on-site mill. The National Instrument 43-101 Technical Report, including …

Granada Gold Mine Inc. (TSXV: GGM) (the “Company” or “Granada”) is pleased to provide an updated High-Grade Mineral Resource Estimate of the Granada Gold Deposit using narrow, rich, vein modelling and both open pit and underground resources and revised pit optimization parameters which are based on the possibility of off-site custom milling ore rather than constructing and using an on-site mill.

The National Instrument 43-101 Technical Report, including the updated mineral resources for Granada contained in this news release, is currently being completed by SGS and will be delivered and filed on SEDAR by GGM within 45 days. The objective of the SGS assignment is to update the MRE using the available data as of December 15, 2020 . The goal is to present resources with both open pit potential and underground potential. Also, gold prices have evolved significantly since the 2019 MRE and that has helped the MRE presented here.

The updated MRE focused on using a scenario with higher cut-off grades than that used in the 2019 MRE. Gold price used is 1600 US$ /oz. 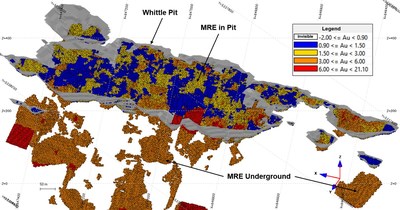 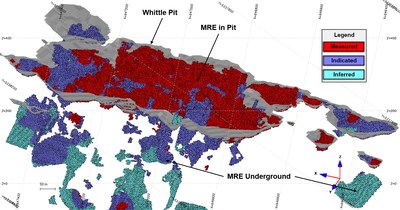 About the Mineral Resource Estimate

New drilling was achieved by GoldMinds Geoservices in 2020. While some of the results were still pending, SGS was mandated to create an updated resource estimation that shows both the potential for open pit resources and underground resources. In order to do that, the individual thin, rich veins had to be modelled individually. These veins are quite continuous (over distances of 800 m in strike and 900 m down dip). Mineralization is open at depth and on strike. The maximum distance between linked intervals is currently about 150 m . Some gaps of about 300 m have no drilling but should contain mineralization given the continuous nature of the deposit.

The thin, rich veins were modelled as a first step in the estimation process. A grade of 0.7 g/t over a length of 2.5 m was used as a minimum. While the 2.5 m constraint was always met, some intervals were considered under 0.7 g/t to allow to model continuous mineralized structures. We estimate that the final 56 thin, rich veins modelled contain 88% of the gold from intervals that meet the 0.7 g/t over 2.5 m criteria.

A block model was created with blocks of 5 x 2.5 x 2.5 m to fill the rich, thin veins while using block centers as indicators for the block’s nature. Both the kriging and inverse square distance estimation methods were tested with very similar results globally. The kriging is more conservative in grade and gold content once we apply the cut-off grades to report resources. Kriging was retained as the estimation method of choice for this project. Search ellipsoids used for the estimation are of 30 x 30 x 7.5 m , 60 x 60 x 15 m and 100 x 100 x 30 m respectively. A minimum of a single drillhole is needed to estimate blocks inside thin, rich veins. A minimum of 2 drillholes are needed to estimate blocks in the low-grade volume. Search ellipsoid orientations are variable depending on local orientation of the model.

The mineral resource statement EXCLUDES the historical production of 51,476 ounces of gold (181,744 Tons @ 0.28 oz/Ton Au) from 1930 to 1935. These numbers were subtracted from the measured resources in the whittle open pit.

The supporting NI 43-101 Technical Report will be posted on SEDAR at www.sedar.com no later than 45 days after the date of this release.

All information pertaining to the resource estimates has been reviewed for accuracy and compliance under National Instrument 43-101 by Yann Camus , P.Eng., SGS Canada Inc. and Qualified Person.

The following tables show the separation of resources between the open pit portion and the underground portion of it.

Earlier this year, (Granada Gold Mine Press Release, August 11, 2020 ) the Company processed by conventional gravity concentration, a large 1220-kilogram grab sample taken over a 3-meter strike length in this stripped area, resulting in the recovery of 55.6 g/t native gold where the native gold component  has been defined, for the Granada Gold Mine, to represent an average of 50% of the recoverable gold (43-101 Technical Report dated February 13, 2019 on the Granada Gold Project Mineral Resource Estimate, Rouyn Noranda, Quebec authored by the Qualified persons, Allan Armitage , Ph. D.., P. Geo and Maxime Dupere, B.SC ., Geo both of SGS Canada Inc. – Section 13.1). The gold-bearing sulphides were not recovered.

“This updated High-Grade Mineral Resource shows the Granada deposit has the potential for extensive custom milling as well as for an on-site mill. The current mineral resource was derived from near-surface drilling over 2 kilometers of an east-west 5.5-kilometer mineralized structure. Exploratory drilling to the north, near the Cadillac Break has encountered high-grade mineralization at a vertical depth of 1100 meters. Mineralization is open at depth and on strike. The company is targeting 2.5 to 3 million ounces with the current 120,000-meter drill program building on the existing 120,000 metres drilled to increase the density of holes on the property.” said Frank J. Basa , P.Eng., President and CEO, “We are also fully permitted and shovel-ready as a shipper of ore to any local mill.”

The technical information in this news release has been prepared by Yann Camus , P.Eng., independent qualified person of SGS and was reviewed by Claude Duplessis , P.Eng., GoldMinds Geoservices Inc. member of Québec Order of Engineers and a qualified person in accordance with National Instrument 43-101 standards.

Granada Gold Mine Inc. continues to develop the Granada Gold Property near Rouyn-Noranda, Quebec . Approximately 120,000 meters of drilling has been completed to date on the property, focused mainly on the extended LONG Bars zone which trends 2 kilometers east-west over a potential 5.5 kilometers of mineralized structure. The highly prolific Cadillac Break, the source of more than 75 million plus ounces of gold production in the past century, cuts through the north part of the Granada property, but is not necessarily indicative of mineralization hosted on the company’s property.

The Granada Shear Zone and the South Shear Zone contain, based on historical detailed mapping as well as from current and historical drilling, up to twenty-two mineralized structures trending east-west over five and a half kilometers. Three of these structures were mined historically from two shafts and two open pits. Historical underground grades were 8 to 10 grams per tonne gold from two shafts down to 236 m and 498 m with open pit grades from 5 to 3.5 grams per tonne gold.