Investing News Network
Fabled Silver Gold Corp. is pleased to announce updates of diamond drilling from the upgraded 9,200 meter drill program on the "Santa Maria" Property in Parral, Mexico As previously mentioned, in drill hole SM20-08B the last sampled interval was from 226.5 - 227.6 meters grading 75.9 gt silver in a north - south silicified structure, mineral bearing and black in color, this unit continues to the end of the hole at ...

Fabled Silver Gold Corp. ("Fabled" or the "Company") (TSXV:FCO)(OTCQB:FBSGF)(FSE:7NQ) is pleased to announce updates of diamond drilling from the upgraded 9,200 meter drill program on the "Santa Maria" Property in Parral, Mexico

As previously mentioned, in drill hole SM20-08B the last sampled interval was from 226.5 - 227.6 meters grading 75.9 g/t silver in a north - south silicified structure, mineral bearing and black in color, this unit continues to the end of the hole at 234 meters, an extra 6.4 meters and the rest of the hole had been sampled on a rush bases priority of which we have now received the assays.

In hole SM20-8B from 199.10 - 215.40 meters reddish, highly oxidized and fractured quart cemented breccia was encountered with a vuggy texture and pervasive silicification very indicative of the structure.

Peter J. Hawley, CEO and President, reports, " We noticed that the rush samples had elevated zinc, which has not been encountered before and as such have reviewed the entire core assayed and can confirm that there is anomalous low-grade silver, but elevated zinc, indicative of a different age mineral plumbing system up to 16.30 meters in width. The bottom of the hole over the 6.40 meters was composed of a greenish, highly fractured limestone with veinlets of quartz and medium - strong chlorite plus argillaceous with sericite alteration.

Knowing this, we have now re-entered into hole 8B to extend the hole to a barren rock unit."

As previously mentioned drill hole SM20-09 was drilled for a targeted depth of -250 meters and was terminated prematurely at 231 meters where not only did the hole collapse due to the fault but jammed the drill rods and a section of the drill string and bit was left in the hole.

Drill Hole SM20 -10 was drilled under hole SM20-09 at -70 degrees and encountered 97.5 meters ( 79.5 - 177 meters) of C1 tectonic faulting containing breccias with oxidized quartz with argillic alteration and was completed to a depth of 226.5 meters. This dry hole with low anomalous silver values also gave zinc values indicating a change in the system.

The important structural information collected from holes 8B and 10 allowed the Company to vector in on the movement components and as such collar drill hole SM20-11 approximately 200 meters to the northeast of holes 8-10 and was drilled at right angle or 90 degrees to the north - south trending faulting and encountered multiply zones of mineralization including 26.90 meters in what is now called the " North Vein Structure."

Peter J. Hawley, CEO and President, remarks, "As I mentioned in previous releases, we are exploring areas never explored before, with new ideas to test our structure-on-structure theory over the Property and ever hole regardless of mineralization tell a piece of the story and adds to the understanding of the emplacement of the various pulses of mineralization and their relationship to orientation of structures.

We are systematically taking what was previously thought of as simple E-W high grade structure and re-evaluating, with numerous successes to date, in order to develop our new concept which is seen below in Figure 1, "Plan View of IP Anomalies and Drill Hole Collars".

P. Hawley continues," Three silver, zinc bearing new structures found, in addition to other silver bearing structures as we continue to zero in on additional new discoveries on the Santa Maria Property bodes well for the rest of the program. 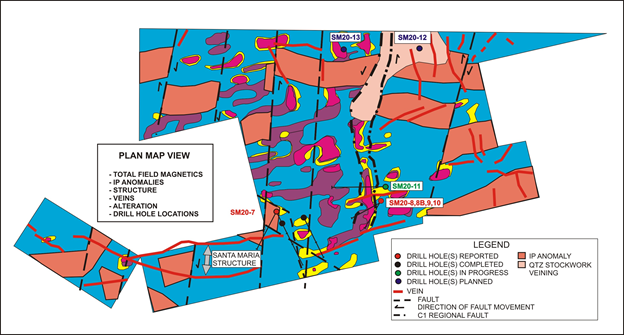 Both these hole have been completed with the drill machine now re-entering hole SM-208B to further extend the hole.

After the completion of hole 8B, hole SM20-14 will be drilled to investigate the hole 11 - 26.9 meter interception at a depth of -170 meters vertically. 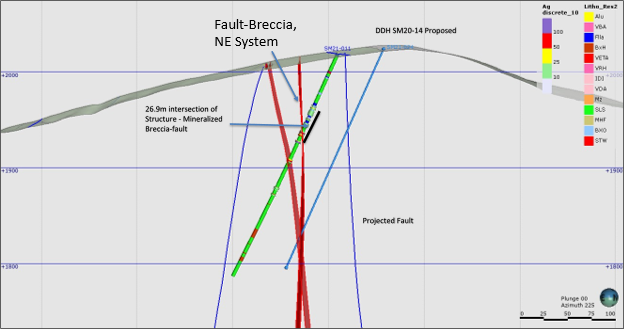 The Company has now completed drill holes SM20-01 - 13 for a total of approximately 3,250 meters of the increased 9,200 meter drill program. Holes SM20-12,13 have been sampled and submitted to ALS Chihuahua Laboratory for analysis. Hole SM20-8B is currently in progress.

To facilitate the underground drilling, various drill bays have been prepared, electric generator set up at the portal and over 350 meters of electric submarine cable being installed in preparation for the installation of the diamond drill in the first drill bay.

Analytical results of sampling reported by Fabled Silver Gold represent core samples that have been sawn in half with half of the core sampled and submitted by Fabled Silver Gold staff directly to ALS Chemex, Chihuahua, Chihuahua, Mexico. Samples were crushed, split, and pulverized as per ALS Chemex method PREP-31, then analyzed for ME-ICP61 33 element package by four acid digestion with ICP-AES Finish. ME-GRA21 method for Au and Ag by fire assay and gravimetric finish, 30g nominal sample weight.

For samples triggering precious metal over-limit thresholds of 10 g/t Au or 100 g/t Ag, the following is being used:

The Company has entered into an agreement with Golden Minerals Company (NYSE American and TSX: AUMN) to acquire the Santa Maria Property, a high-grade silver-gold property situated in the center of the Mexican epithermal silver-gold belt. The belt has been recognized as a significant metallogenic province, which has reportedly produced more silver than any other equivalent area in the world.

Mexico produces more silver than any other country in the world, and the city of Parral in Chihuahua, Mexico, is exceptionally special. After the discovery of silver in 1631, San José de Parral was established as a mining town and later declared “the capital of the silver world” by King Philip IV of Spain. The district continues to be a significant center for silver mining and presents companies operating in the area with a world-class opportunity for silver discovery and high-quality exploration.

Gold was able to end this week on a high note. Its lowest point for the period was just over US$1,940 per ounce on Monday (April 11), but since then it's trended upward.

The yellow metal rose to the US$1,980 level for a brief amount of time on Wednesday, and was still relatively elevated on Friday (April 16) afternoon, sitting at US$1,974.

VIDEO — Maria Smirnova: Our Thesis Hasn't Changed — We Believe in Gold and Silver

Maria Smirnova: Our Thesis Hasn't Changed — We Believe in Gold and Silveryoutu.be

Gold has pulled back from the highs seen earlier this year, but according to Maria Smirnova, senior portfolio manager at Sprott Asset Management, the yellow metal is on a positive path.

Smirnova, who is also sub-advisor to the Ninepoint Silver Equities Class and the Ninepoint Gold and Precious Minerals Fund, has a positive outlook for both gold and silver, although she said the white metal is now in limbo.

"To be honest, our thesis has not changed in years ... we believe in gold and silver and the associated miners as a diversifier of portfolios," she told the Investing News Network in an interview.

Today, Newmont Corporation (NYSE: NEM, TSX: NGT) launched its 2021 Sustainability Report as part of its suite of reports on the Company's environmental, social and governance (ESG) practices in key areas that include health, safety and security, human rights, the environment, social acceptance, governance, and inclusion and diversity.

TomaGold Corporation (TSXV: LOT) (OTCQB: TOGOF) (" TomaGold " or the " Corporation ") is pleased to report the last results of its 11,500-metre drilling program on its wholly-owned Obalski property in Chibougamau, Quebec. In this latest phase, the Corporation drilled five holes for a total of 2,409 m.

All amounts expressed in US dollars

B2Gold Corp. (TSX: BTO) (NYSE AMERICAN: BTG) (NSX: B2G) ("B2Gold" or the "Company") is pleased to announce its gold production and gold revenue for the first quarter of 2022. All dollar figures are in United States dollars unless otherwise indicated.

Helium Evolution Announces Appointment of Heather Isidoro to Board of Directors