Canex Metals Inc. (TSXV:CANX) ("CANEX" or the "Company") is pleased to announce assay results have been received for the first 5 holes from the Company's 2021 reverse circulation (RC) drilling program at the Gold Range Project, Arizona

Results for the first batch of RC drill holes GR21-15 to 19 from the Company's 2021 drilling program at the Gold Range project have been received and are presented here. These first 5 holes were drilled at the Eldorado Zone where the Company discovered bulk tonnage style gold mineralization potential in late 2020 (see CANEX news release dated November 2, 2020).

Holes GR21-17, 18, and 19 are shown on cross section A-A' along with previously released holes GR20-8 and 9. These holes confirm a flat dipping zone of near surface oxidized gold mineralization that appears to thicken to the northwest where the zone remains open and potentially extends under cover. The mineralized zone is surrounded by a larger halo containing anomalous gold values that also appears to thicken toward the northwest and to depth, suggesting the system might strengthen in those directions.

Dr. Shane Ebert, President of the Company stated, "These results confirm continuity and a flat dipping geometry to the near surface gold zone at Eldorado and this increased understanding will help ongoing exploration efforts. Perhaps of greater exploration significance is the 100 metre plus halo of anomalous gold that surrounds the mineralized zone, with gold values up to 0.1 to 0.2 g/t. This large gold halo, combined with the presence of anomalous gold within a post metamorphic Cretaceous aged granite, reinforces the prospectivity for larger intrusion related zones of gold mineralization in the area, a target style that has not yet been targeted or tested through drilling".

*Drill hole intercepts, true widths have not been determined.

Holes GR21-15 and 16 were collared from the same pad located 50 metres southwest of section A-A'. Hole GR21-15 was a vertical hole drilled to a total depth of 79.3 metres, and hole GR21-16 was drilled toward the northwest at an angle of -45 degrees to a total depth of 76.2 metres. Both holes intersected widespread anomalous gold with no significant zones of mineralization. 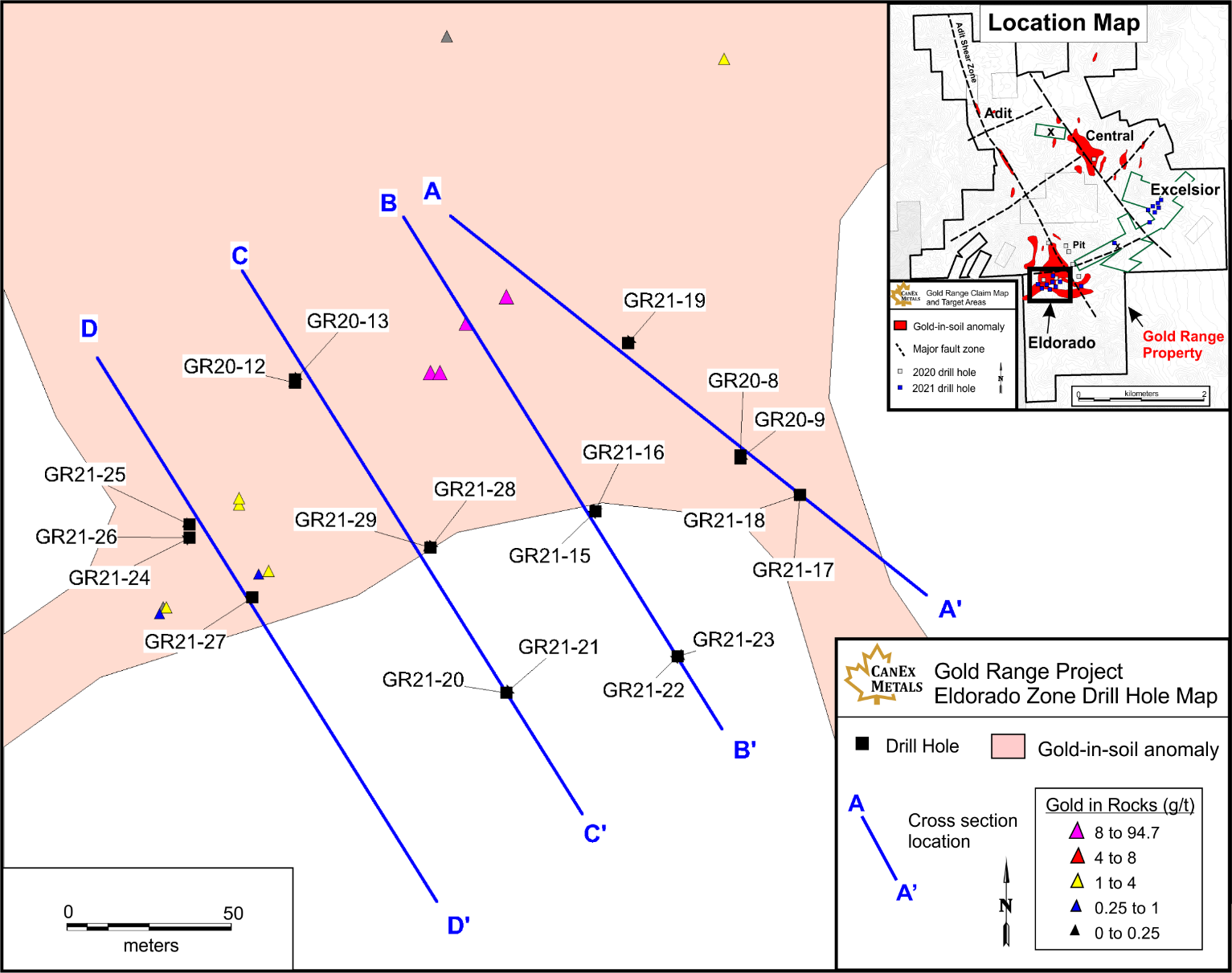 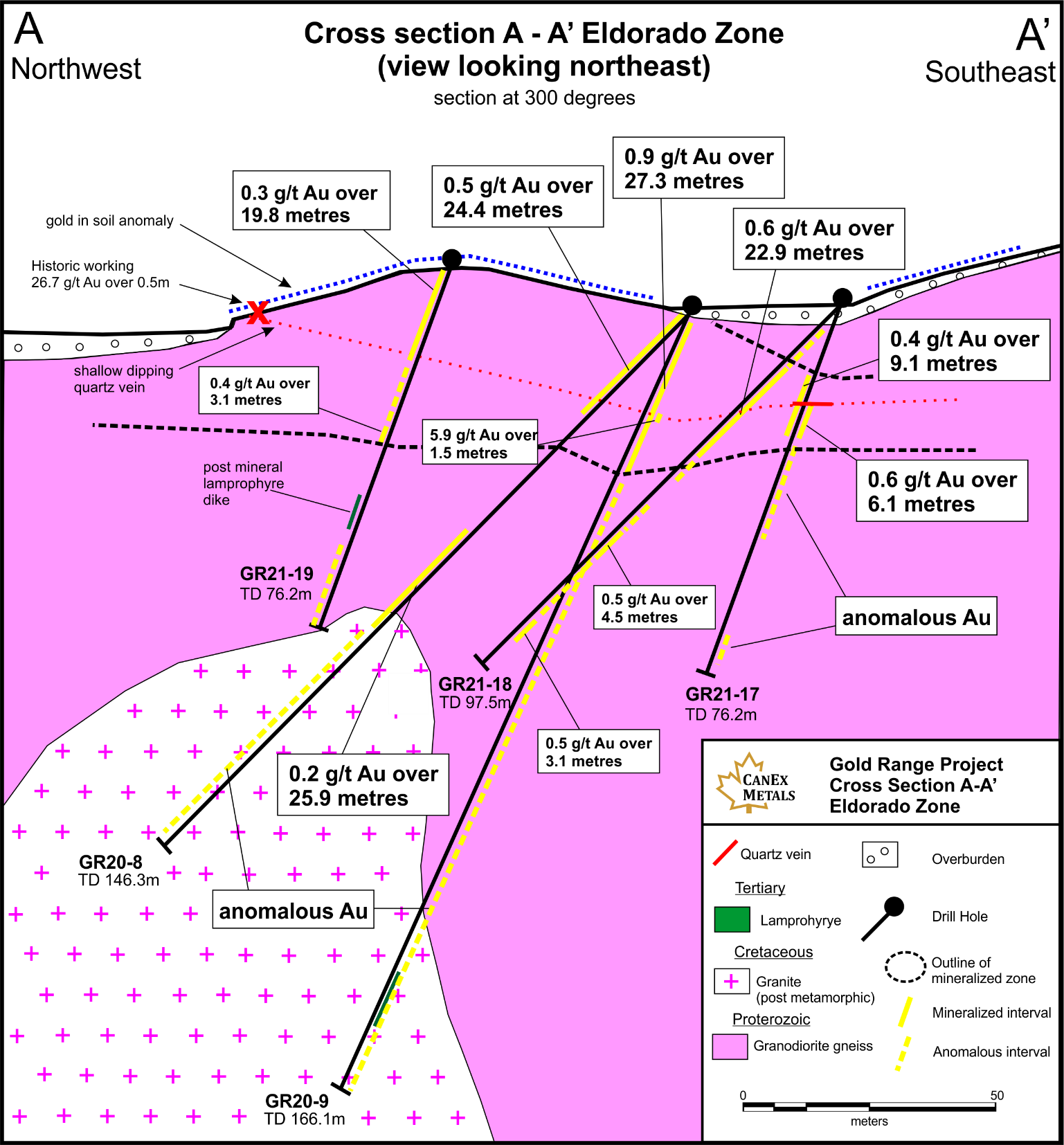 In early 2021 the Company successfully completed 34 reverse circulation drill holes across 2.5 kilometres of strike length along the southern portion of the Gold Range Property. In total 2357.6 metres were drilled in holes ranging from 38 to 137 metres deep. Fifteen holes were drilled at the Eldorado Zone to test and expand the Company's previously announced bulk tonnage oxide discovery, 5 holes tested various targets across the southern part of the property and 14 holes tested the Excelsior Mine area.

Results for an additional 29 drill holes are pending and will be released as they are received, compiled, and interpreted.

Canex Metals (TSX.V:CANX) is a Canadian junior exploration company focused on advancing its Gold Range Project in Northern Arizona. Led by an experienced management team, which has made three notable porphyry and bulk tonnage discoveries in North America, CANEX has identified and tested several targets which host the potential for bulk tonnage oxide gold mineralization at it's the Gold Range Project. Drilling in 2020 identified near surface bulk tonnage gold potential at the Eldorado Zone with Hole GR20-9 returning 0.9 g/t gold over 27.3 metres including 5.9 g/t gold over 1.5 metres. The new discovery correlates with a strong gold in soil anomaly and sheeted quartz veinlets and stockworks within metamorphic rocks. CANEX has recently entered into an LOI to acquire the Excelsior Mine, located 2.5 kilometres from Eldorado on the eastern side of the Gold Range Property. Excelsior has seen historic underground and open pit mining along a zone 200 metres long and open along strike. Gold mineralization is centered along the shallow dipping high grade Excelsior Vein which is surrounded by a halo of sheeted quartz and quartz carbonate veins 20 to 50 metres wide.

Gold Bull Resources Corp. (TSX-V: GBRC) (" Gold Bull " or the " Company ") is pleased to report that it has completed the sale of its wholly-owned subsidiary, Zelenrok EOOD (" Zelenrok "), to Raiden Resources Limited (" Raiden ") (ASX - RDN). Zelenrok holds the rights to the Zlatusha and Kalabak projects, as well as an additional mineral application, Draka, located in Bulgaria.

GCM Mining Corp. ("GCM Mining" or the "Company") (TSX: GCM, OTCQX: TPRFF) announced today that its Board of Directors has declared the next monthly dividend of CA$0.015 per common share will be paid on June 15, 2022 to shareholders of record as of the close of business on May 31, 2022.

Shallow High-Grade Gold Discovery in the Extension of the Sadowski Zone: 52.12 g/t Gold over 2.29 metres