Midnight Sun Mining Corp. (TSXV: MMA) (OTCQB: MDNGF) (the "Company" or "Midnight Sun") is pleased to release the initial results from drilling conducted on its Solwezi Licences during 2022. The Solwezi Licences are located immediately southwest of First Quantum's Kansanshi Copper Mine, the largest copper mining complex in Zambia.

Overview
Midnight Sun's 2022 exploration program was designed to validate and confirm new structural control models for upgraded stratabound copper mineralization in different areas of known mineralization on the Solwezi Licences. The new structural control models were developed in-house following a review and re-interpretation of past exploration work and new high-resolution geophysical data over the project area.

During the 2022 Solwezi field season, Midnight Sun has completed 12 drill holes totaling 2,639 metres of core with two additional drill holes currently in progress. Drilling has been on the Mitu Trend and on the Crunch Zone Prospect. The Company intends to continue field work as long as weather conditions permit. For the balance of the 2022 field season, the Company's work will focus on gaining a better understanding of the newly identified Kansanshi-style mineralization on the Mitu Trend.

Al Fabbro, President and CEO of Midnight Sun, stated, "The start of our 2022 program has accomplished precisely what we hoped for, which is proof of concept. The work completed has revealed a new, prolific style of mineralization at Mitu which is a very exciting find and adds to the already known mineralized potential in the area."

Targets Tested and Results
Mitu Trend
The Mitu Trend targets were developed based on the interpretation of airborne magnetic data which highlighted a corridor of intense deformation, about 8 - 10 kilometres wide, that includes numerous northeast-trending structures which are also key to mineralization at the Kansanshi Mine.

Holes drilled to test the continuity of the historic intercept in hole MDD-17-15 which measured 4.23% CuEq over 11.6m (see the Company's news release dated July 4, 2017) achieved a technical success, encountering sulphide minerals in fault breccia and the associated alteration zones broadly within the target depth interval. A detailed assessment is underway to assess the complexity of the setting in which this discovery was made.

Crunch Zone
The Crunch Zone exploration target is situated between the Kazhiba Dome in the northwest and the Solwezi Dome in the southeast (Figure 1). Based on geophysical data, it appears a northeast trending wedge of Copperbelt strata is 'crunched' between the domes showing interference fold patterns that abruptly terminate against the domal structures. An analysis of the VTEM electromagnetic survey suggest mineralized fluids may have migrated along major faults or thrusts which occurred where the Copperbelt strata encountered the dome structures.

An initial drill program consisting of several drill traverses to test for mineralization as well as determining the rock succession in the contact zones is underway at the Crunch Zone with seven holes completed. No assays from these holes have been received yet. 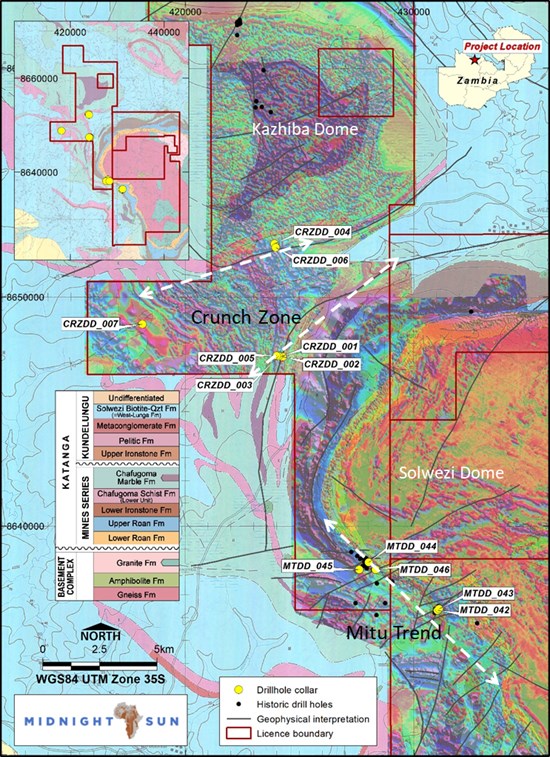 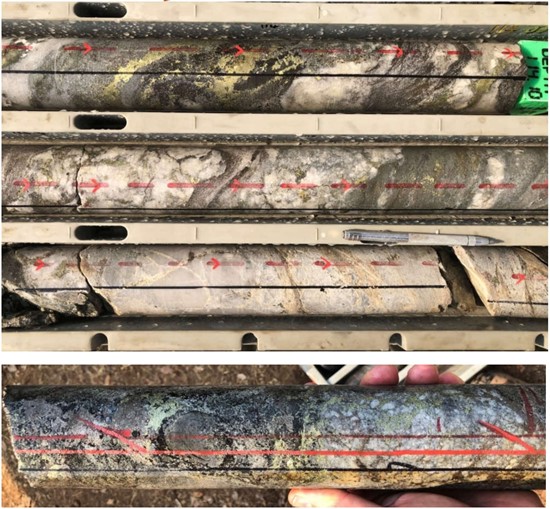 Figure 2: Drill cores from MTDD-044 (above) and MTDD-045 (below) illustrating the style, setting and alteration associated with copper mineralization at Mitu.

To view an enhanced version of Figure 2, please visit:
https://images.newsfilecorp.com/files/2553/143247_midnightsunfigure2.jpg

Quality Control/Quality Assurance
Core samples obtained from diamond drilling were transported directly to SGS Inspection Services in Kalulushi, Zambia by Midnight Sun personnel for sample preparation. There the samples were sorted, dried, crushed, and pulped before final chemical analysis using ICP42S method which encompasses a 3 or 4 acid digest followed by an AAS multi-element scan. All samples returning >10,000 ppm Cu were automatically re-assayed for higher level concentrations by SGS, which is a fully accredited laboratory. Standards and blanks were inserted regularly in the sample stream and checks were done for Cu.

Qualified Person: Richard Mazur, P.Geo., a Director of the Company anda Qualified Person under NI 43-101, has reviewed and approved the technical data and contents of this release.

ON BEHALF OF THE BOARD OF Midnight Sun Mining Corp.

To view the source version of this press release, please visit https://www.newsfilecorp.com/release/143247

Al Fabbro, President and CEO of Midnight Sun, stated, "I am excited for this drill program and it is important to me that we get as much exploration done as possible this field season. The addition of a second rig will expedite our work to ensure we maximize Dr. Dorling's technical plan."

Midnight Sun Mining Corp. (TSXV: MMA) (OTCQB: MDNGF) (the "Company" or "Midnight Sun") is pleased to report all preparations have been completed and drilling has commenced on the Company's Solwezi Licences in Zambia.

Midnight Sun Mining Corp. (TSXV: MMA) (OTCQB: MDNGF) (the "Company" or "Midnight Sun") is pleased to report that Zambian-Congo Copperbelt expert, Dr. Simon Dorling, has agreed to accept and maintain an engagement with the Company. Simon has reviewed the data and results obtained by Rio Tinto Mining and Exploration ("Rio Tinto") on Midnight Sun's Solwezi Licences in Zambia and integrated this information with the data created by Midnight Sun and previous operators as well as incorporating recent research in the region to build a comprehensive database and inclusive interpretation of the structural-geological settings for mineralisation for future targeting.

Dr. Dorling's work has generated several new targets and justification to revisit existing prospects on the licences, including the proposal of structural corridors controlling mineralization around both the Mitu discovery area as well as hole MDD-17-15 on the Mitu Trend which measured 4.23% CuEq over 11.6 metres (see the Company's news release dated July 4, 2017). These corridors suggest a fault-control on mineralisation through re-mobilisation into late northeast-trending faults which leave these mineralized areas open along strike.

Under the terms of the Earn-In Agreement, Rio Tinto has not earned any ownership of the Solwezi Licences, and control will be returned to Midnight Sun, along with all samples and data collected while Rio Tinto acted as the project operator.

Midnight Sun Mining Corp. (TSXV: MMA) (OTCQB: MDNGF) (the "Company" or "Midnight Sun") is pleased to announce that common shares of the Company are now eligible for electronic clearing and settlement through the Depository Trust Company ("DTC") in the United States.

DTC eligibility is expected to simplify the process of trading and enhance liquidity of the Company's common shares in the United States. With DTC eligibility, existing investors benefit from potentially greater liquidity and execution speeds, as well as giving new investors an opportunity to efficiently participate in the trading of Midnight Sun's common shares where their previous investing platform did not allow for non-DTC investing.

StrategX Elements Corp. (CSE: STGX) ("StrategX" or the "Company"), reports a new discovery of energy transition metals from BHP's drill hole #14 located in Target Area 1 of the Nagvaak Project located on the Melville Peninsula, Nunavut. The mineralized interval in this drill hole returned 2.63% copper equivalent (CuEq) over 58 metres starting at a depth of 27 metres below surface. This interval includes anomalous values of 0.25% nickel, 0.51% vanadium pentoxide, and 0.06% molybdenum. This is very significant in that it confirms the extensive surface anomalies in critical energy metals occur at depth and appear to be open in all directions and continue along the 6km E-W trending mineralized corridor. The Company's next phase of exploration will focus on drilling to expand the mineralized zones, scheduled to commence during the latter part of Q1-2023. "Nagvaak" is an Inuit name and has multiple meanings connected to local landmarks - it also means connection with the land.

The Company is highly encouraged by the results to date. Drilling continues to extend the deposit east and west of the historical drilling as indicated on the longitudinal sections Figures 3 and 4 below (see also news releases dated September 30, 2022, October 13, 2022 and November 3, 2022). Figure 1 below illustrates how the surface projection of the deposit has expanded significantly relative to the projection of the historical resources. Joaquin Merino, P.Geo., President of Emerita, notes: "Given the increasing dimensions of the lenses in longitudinal section and plan, we anticipate an increase in tonnes relative to the historical calculation. Keep in mind, not all of the massive sulphide will be above the cut off grade so no direct comparison can be made until we complete the drill program and model the deposit. However, drills are now targeting a very important area of the deposit that hosts some of the thickest and highest grade sections based on the historical drilling and much of this area was not assayed for gold. Presently, there are approximately 60 additional drill holes between the core shack and the assay labs with results pending."

Platinex Inc. (CSE: PTX) (Frankfurt: 9PX) ("Platinex" or the "Company") is pleased to provide an update on exploration activities at its Shining Tree Gold Project ("Shining Tree" or the "Project") located in the Abitibi region of Ontario, a world-renowned gold district.

The Company has adopted a two-pronged approach whereby it is working both to identify new gold targets in several highly prospective and underexplored areas of the 225 km 2 land package, including ground along the Ridout-Tyrrell Deformation Zone (RTDZ), through cost-effective grassroots prospecting methods, and to further develop drill targets at the centre of the property, including the Herrick deposit and the Ronda Mine area, through more advanced exploration. Several areas targeted as part of the current exploration program are on the grounds that Platinex acquired through recent property acquisitions.

1844 Announces the Sale of the Lac Arsenault Project

1844 Resources Inc. (TSXV: EFF) (the "Company" or "1844") announces that it came to an agreement to sell its Lac Arsenault Project to Canada Gold Resources Ltd (the "Purchaser")

The Purchase Price for the Mining Claims shall be Six Hundred Thousand Canadian Dollars ($600,000.00CAD) payable as follows: