Marvel Discovery Corp. (TSXV:MARV)(Frankfurt:O4T1)(OTCQB:MARVF); (the "Company") is pleased to announce it has received final approval from the TSX Venture Exchange to proceed with assumption agreement the ("Assignment Agreement") with District 1 Exploration Corp. ("District 1") pursuant to which District 1 has assigned all of its rights and obligations with respect to a property option agreement dated October 30, 2018, as amended November 23, 2020 (the "Option Agreement") whereby District 1 was granted sole and exclusive right and option to acquire a 100% interest (the "Option") in the Highway North Property in the Athabasca region of Saskatchewan (the "Property

The Property is located 70km southwest of the former producing Key Lake Uranium Mine. Aptly named for its location along Highway 914, the Property consists of five contiguous claims totaling 2,573 hectares. The Key Lake Deposit, which is northeast of the Property, consisted of two mineralized zones which historically produced a total of 4.2 million tonnes of product at an average grade of 2.1% U3O8 (Harvey, 1999). Only 21 drill holes have been drilled on the Property thus far totaling 3,527m, between 1980 and 2008. Surface exploration and drilling have verified the presence of uranium mineralization along the Highway Zone, with grades up to 2.31% U3O8 over 0.29m in KLR15-086.

Mr. Karim Rayani, President & Chief Executive Officer commented, "I am very pleased with the progress we have made in a such short period of time; Marvel has created a portfolio of projects that rivals our peers. It's a testament to the way we are setting up Marvel for success. When I started this journey at Key Lake, I partnered with some of the best industry professionals who shared my vision - with a focus on clean energy. Marvel is more than a one commodity company. The Highway North project is perfectly situated in the right geological setting for basement hosted Uranium deposits, such as the Millennium Zone and Key Lake deposits of Cameco. This is a win-win for both District 1 Shareholders and Marvel having access to this project which would be nearly impossible to purchase otherwise, we continue to present stakeholders the rare opportunity to participate and have exposure to multi-commodity and critical elements under one umbrella."

The deposit model for exploration on the Highway North Property has been a basement-type unconformity-related uranium deposit, such as those found at the Eagle Point, Millennium, and the Gaertner and Deilmann (Key Lake). This deposit type belongs to the class of uranium deposits where mineralization is spatially associated with unconformities that separate Proterozoic conglomeratic sandstone basins and metamorphosed basement rocks (Jefferson et al., 2007). Although rocks of the Athabasca Group and the basal unconformity do not outcrop on the Property, they likely once overlaid the basement gneisses and metapelites which now do, as the current erosional edge of the Athabasca Basin, and potential outliers, is about 50km north of the Property.

In Saskatchewan, uranium deposits have been discovered at, above, and up to 300m below, the Athabasca Group unconformity within basement rocks. Mineralization can occur hundreds of meters into the basement or can be up to 100m above, in Athabasca Group sandstone. Typically, uranium is present as uraninite/pitchblende that occurs as veins and semi-massive to massive replacement bodies. Mineralization is also spatially associated with steeply-dipping, graphitic basement structures and may have been remobilized during successive structural reactivation events. Such structures can be important fluid pathways as well as structural or chemical traps for mineralization as reactivation events have likely introduced further uranium into mineralized zones and provided a means for remobilization (Jefferson, et al. 2007) (Figure 1).

The Highway Property straddles the Key Lake Fault Zone, an important corridor for structurally controlled Athabasca Basin type uranium deposits. Critical criteria on the Property for these type of uranium deposits include the presence of graphitic EM conductors within metasedimentary packages, major re-activated northeast-trending fault systems that have been disrupted by obliquely cross-cutting subsidiary structures and the presence of uranium-enriched source rocks (Figure 2). Exploration to date on the Property has been limited. 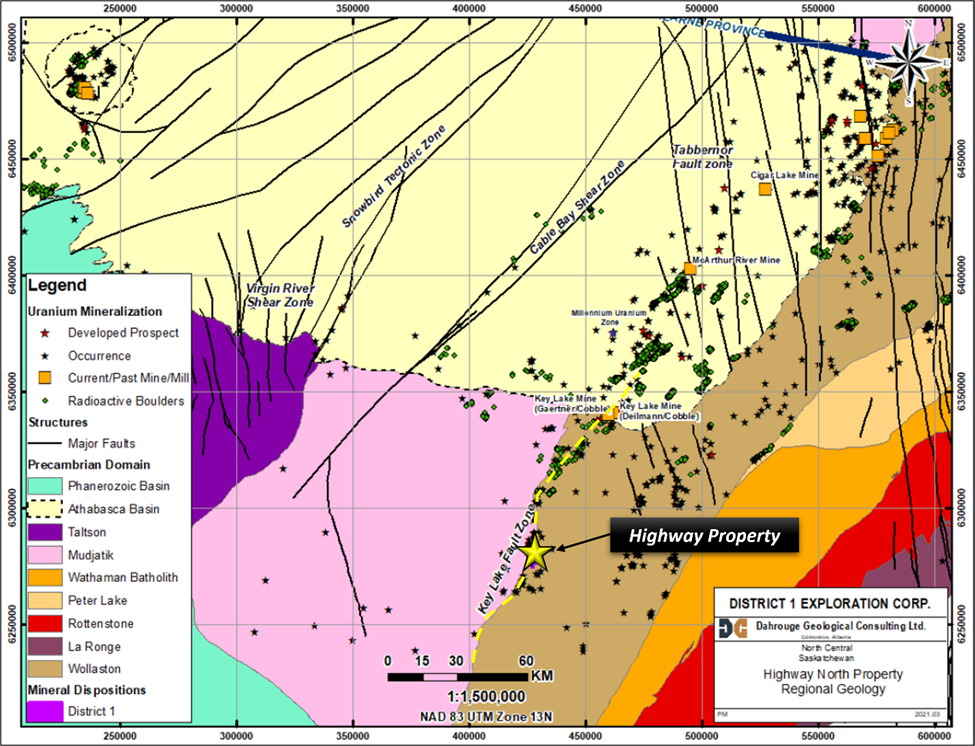 Figure 2: Regional geological and structural location of the Highway Property.

As consideration for the Option, the Company has agreed to issue 4,600,000 common shares to District 1 (the "Consideration Shares") at a price of $0.09 per share. The Company will assume all obligations of District 1 under the Option Agreement to acquire the Property including, issuing a total of 1,250,000 Shares to the owner of the Property (the "Optionor"), paying a total of $115,000, and incur a total of $650,000 of expenditures on the Property, over time. In addition, the Optionor will retain a 1 % (NSR) net smelter royalty that can be purchased for 1 million CDN.

The transaction between the Company and District 1 can be considered as non-arm's length, in that the companies share a common director.

The technical content of this news release has been reviewed and approved by Mike Kilbourne, P.Geo., who is a Qualified Person as defined by National Instrument 43-101, Standards of Disclosure for Mineral Projects. The QP has not completed sufficient work to verify the historic information on the properties comprising the Highway Property, particularly regarding historical exploration, neighbouring companies, and government geological work. The information provides an indication of the exploration potential of the Property but may not be representative of expected results.

VANCOUVER, BC / ACCESSWIRE /September 23, 2022 / Marvel Discovery Corp.(TSXV:MARV)(Frankfurt:O4T)(OTCQB:MARVF), ("Marvel");and Falcon Gold Corp. (FG: TSX-V), (3FA: GR), (FGLDF: OTCQB), ("Falcon");and together (the "Alliance") are pleased to provide an update on their combined exploration focus for their Hope Brook Projects which are strategically located contiguous to Benton-Sokoman's Joint Venture, and First Mining's ground which was recently optioned to Big Ridge Exploration. The Alliance had originally planned to complete high resolution magnetic gradiometer surveys over the project area, a proven method to distinguish structural complexities in geological terranes. Start of the survey work has been delayed due to helicopter availability from forest fires in Central Newfoundland, a state of emergency was issued. Providing the Alliance an opportunity to conduct a geophysical review and structural interpretation over the Hope Brook project area in advance of the survey and surface work. The Alliance is pleased to announce that the geophysical review has identified kilometer-scale shear zone corridors, and a major fold closure, interpreted from the magnetic patterns, within the Hope Brook Property area. These will be the focus of prospecting and till sampling projects employed to verify the structures and determine their mineralization potential. With recent success in identifying anomalous gold, tungsten, silver, and copper reported by Falcon at their Gander North Property (September 15, 2022), the Alliance has shifted their exploration focus to the Gander district.

Marvel Discovery Corp. (TSXV:MARV)(Frankfurt:O4T)(OTCQB:MARVF); ("Marvel" or the "Company")is pleased to report on findings from our most recent field campaign on the Duhamel Ni-Cu-Co-PGE and Ti-V-Cr property which is located 350 kilometres (km) north of Quebec City, QC (Figure 1 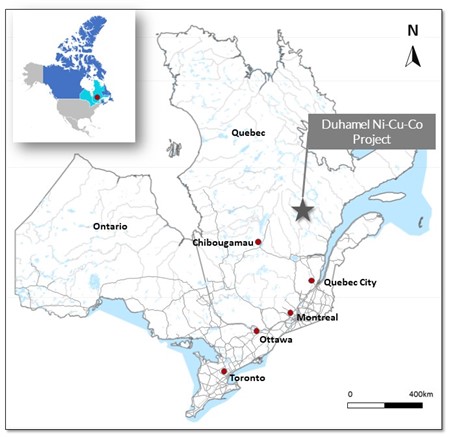 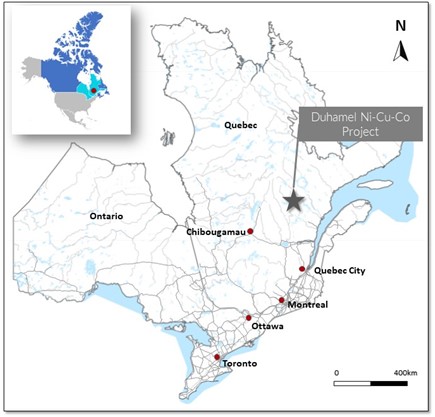 What factors are responsible for that broad range? The US Federal Reserve played a role mid-week.

The central bank's first meeting of the year ran from Tuesday (January 31) to Wednesday (February 1), and it ended with an interest rate hike of 25 basis points, the smallest since last March. The Fed's benchmark interest rate now sits at 4.5 to 4.75 percent.