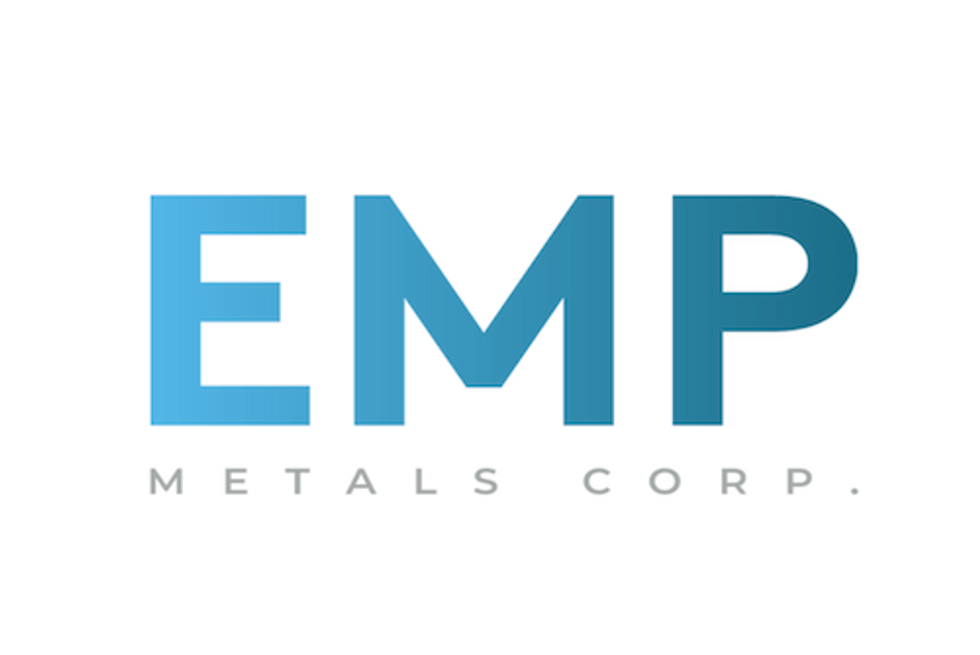 EMP Metals Corp. (CSE: EMPS) (OTC: EMPPF) ("EMP Metals" or the "Company ") is pleased to announce the appointment of Mr. Michael Kobler to the position of technical consultant.

Mr. Kobler is the former president, and current general manager of US operations for American Lithium (TSXV-Li), successfully advancing the TLC lithium project in Nevada . Prior to that, Mr. Kobler has specialized in identifying, acquiring, developing, and producing natural resource opportunities throughout the world as well as overseeing the design and construction of a number of infrastructure projects.

He has served in a variety of roles for early-stage companies including, Chairman, Chief Executive Officer, President, Technical Advisor, Engineer, and Project Manager, and has been a founder and a major shareholder in a number of these ventures. Mr. Kobler has a strong record of success in the exploration, permitting, and de-risking of resource projects. His expertise in identifying opportunities through a detailed examination of all available information combined with his in-depth knowledge of permitting processes, including detailed environmental work, and dealing with issues related to water supply have positioned him for projects across North and South America . Mr. Kobler holds a BSc in Mining Engineering from Montana Tech.

EMP Metals President, Rob Gamley , commented, "I am really pleased to make this announcement. Mike is a tremendous resource for our Company. His experience in the lithium space will be a major asset as we develop the Saskatchewan assets we have in our joint venture."

EMP Metals is a Canadian-based exploration company focused on the acquisition and exploration of mineral projects with significant development potential. Its current portfolio includes lithium exploration projects in Saskatchewan , Canada.  For more information, please go to the Company's website at www.empmetals.com .

Information set forth in this news release contains forward-looking statements that are based on assumptions as of the date of this news release. These statements reflect management's current estimates, beliefs, intentions and expectations. They are not guarantees of future performance. EMP Metals cautions that all forward-looking statements are inherently uncertain, and that actual performance may be affected by a number of material factors, many of which are beyond EMP Metals' control. Such factors include, among other things: risks and uncertainties relating to EMP Metals' limited operating history, ability to obtain sufficient financing to carry out its exploration and development objectives on its mineral properties, obtaining the necessary permits to carry out its activities and the need to comply with environmental and governmental regulations. Accordingly, actual and future events, conditions and results may differ materially from the estimates, beliefs, intentions and expectations expressed or implied in the forward-looking information. Except as required under applicable securities legislation, EMP Metals undertakes no obligation to publicly update or revise forward-looking information.

Neither the Canadian Securities Exchange ("CSE") nor its Regulation Services Provider (as that term is defined in the policies of the CSE) accepts responsibility for the adequacy or accuracy of this news release.

EMP Metals Corp. (CSE: EMPS) (OTC: EMPPF) ("EMP Metals" or the "Company ") is pleased to announce that EMP subsidiary company Hub City Lithium ("HCL") and  Epping Energy Inc. have entered into a Wellbore Takeover Agreement (the "Agreement") over 13108-07-014-11W2 (the "Well') whereby HCL will test the Well for lithium concentrations.  Within the Agreement HCL assumes the abandonment liability of the Well, estimated at $70,000 which aligns with HCL's highly cost-effective strategy of testing for lithium within existing infrastructure.  The Well is located in the Tyvan area of Southeast Saskatchewan which is within half mile of HCL's lands.

A multi-zone perforation test will be performed post-break-up on the Well, testing the inflow potential and lithium concentrations in the target Duperow zone. The Duperow zone is the same zone that confirmed lithium concentrations of up to 96.3 mg/l in the Mansur, which is approximately 50km SW of the Well.  The follow up flow test of the Mansur test well indicated the potential for future development of a dual layer lithium brine project with high flow rates and brine concentrations in the 86 to 96.3 mg/l range.  Vertical wellbore development of the lower Duperow zone with 86 mg/l zone is viable due to the high flow rates in that zone.

Rob Gamley , President of EMP Metals, stated, "With 97% of the warrants exercised, it is great to see such strong support and confidence in our Company from existing shareholders.  The additional cash strengthens our balance sheet and allows us to expand our exploration and development plans on our lithium-brine properties in Saskatchewan ."

EMP Metals Corp. (CSE: EMPS) (OTC: EMPPF) ("EMP Metals" or the "Company ") announces that it has accelerated the expiry date of common share purchase warrants of the Company issued on August 4, 2021 (the "Warrants") in accordance with the terms of the Warrants. Approximately 11.1 million Warrants are currently outstanding and are subject to acceleration. If all Warrants are exercised, the Company will receive proceeds of approximately $2.56 million which will be used to drill the Company's lithium brine properties located in Saskatchewan .

EMP Metals Corp. (CSE: EMPS) (OTC: EMPPF) ("EMP Metals" or the "Company ") announces that it has granted a total of 700,000 stock options to its directors, officers, employees, consultants and advisors. All options expire five years from the date of grant.  500,000 are exercisable at $0.40 per share and vesting immediately.  200,000 are exercisable at $0.40 per share with 50% of the options available on the grant date and the remaining 50% vesting for 6 months after the grant date.

EMP Metals is a Canadian-based exploration company focused on the acquisition and exploration of mineral projects with significant development potential. Its current portfolio includes lithium exploration projects in Saskatchewan , Canada.  For more information, please go to the Company's website at www.empmetals.com .

NOT FOR DISSEMINATION IN THE UNITED STATES OR THROUGH U.S. NEWS WIRES

New Media Capital 2.0 Inc. (" New Media " or the " Company ") (TSXV: NEME.P) announces that it has entered into a non-binding letter of intent dated January 26 th 2022 with Hypersonix Launch Systems Ltd. (" Hypersonix "), a private company incorporated under the laws of New South Wales, Australia, to effect an arm's length transaction that will result in a reverse takeover of New Media by Hypersonix (the " Proposed Transaction "). Trading in the common shares of New Media have been halted until such time as all required documentation has been filed with and accepted by the TSX Venture Exchange (the " TSXV ") in connection with the Proposed Transaction. There can be no assurances that the Proposed Transaction will be completed on the terms set out below or at all.

Alchemy Resources Limited (ASX: ALY) (“Alchemy” or “the Company”) is pleased to announce it has identified additional outcropping pegmatites at its 100% owned Karonie Gold Project located east of Kalgoorlie in Western Australia. The recent mapping has now identified a pegmatite cluster and has doubled the strike length at the Cherry and Hickory prospects, and has identified multiple outcropping pegmatites at Pecan in the north.