TinOne Resources Inc. (TSX-V: TORC) (" TinOne " or the " Company ") is pleased to provide the first drill results from its Great Pyramid Tin (Sn) project located in the tier one mining jurisdiction of Tasmania, Australia .

Results have been received for 764 metres of the Company's ongoing 5,500 metre drilling program at its Great Pyramid project in Tasmania, Australia . These results represent complete results for seven Reverse Circulation (RC) drill holes and partial results for one additional RC hole.  Assays are being fast tracked and average laboratory turnaround to-date has been 23 days.

Drilling commenced at the Great Pyramid project on April 27, 2022 , with three drill rigs currently operating on site, including two Diamond (DD) rigs and one RC rig.  The initial program consists of approximately 5,500 metres and has several objectives:

"We are extremely pleased to report our first results from our Great Pyramid tin project so quickly after listing," commented Chris Donaldson , Executive Chairman. "The results have demonstrated robust grade continuity within the historical resource at grades equal to or above historical grades. In addition, the results provide further confidence that mineralisation extends below the historical resource. Ongoing work will fill gaps in the data coverage, particularly at depth, and allow us to develop our grade distribution model and build our geological interpretation to integrate with the extensive historical database."

In addition to the RC drill results reported here, an additional 1,102 metres of diamond drilling has been completed within, lateral to and beneath the historical resource area.  Drill core processing is underway with an initial 209 metres of core despatched to the laboratory.  To-date these diamond holes have intersected alteration and mineralisation over variable thicknesses up to 120m beneath the historical resource area (Figures 4, 5, 6). 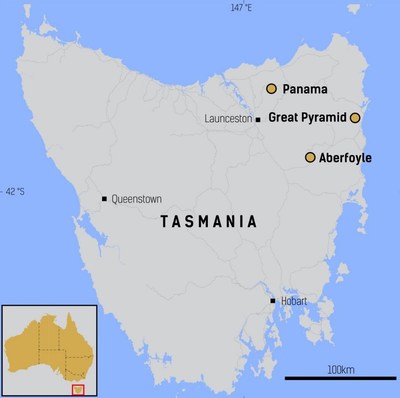 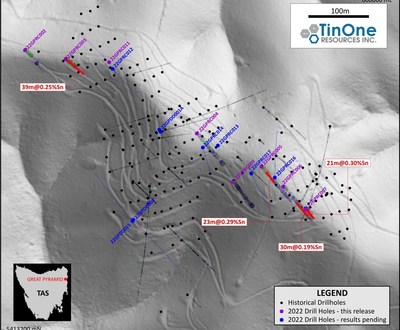 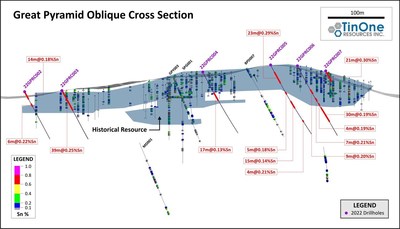 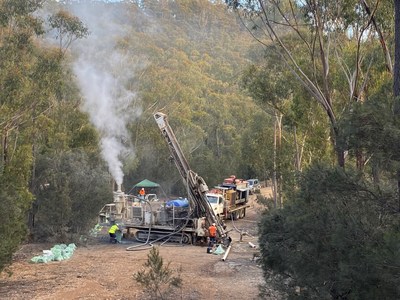 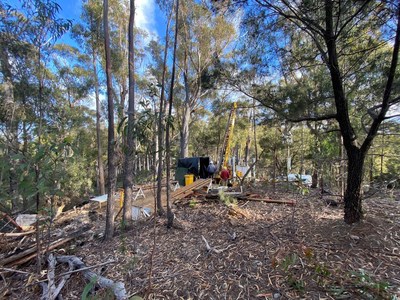 The Great Pyramid deposit is located around a topographical feature known as Pyramid Hill and is hosted by Silurian to Devonian Mathinna Supergroup sandstones. The mineralization is formed by closely spaced sheeted northeast trending, cassiterite (SnO₂) bearing veins associated with silicification and sericite-pyrite alteration. The deposit style and regional comparisons suggests that a tin-fertile granite exists at depth below the deposit, however this has not been encountered in drilling and the deposit is open at depth. Geological interpretation indicates that certain sedimentary units within the folded Mathinna Supergroup sediments are more favourable hosts and diamond drilling being undertaken by the Company during the current campaign, combined with numerical modelling, will assist in developing a deeper understanding of controls on grade for follow up drilling.

The deposit is currently known over a strike length of more than 500 metres with an average width of approximately 150 metres. The depth extent of the deposit is unknown with only nine historical drill holes greater than 150 metres deep. These rare deeper holes encountered encouraging tin mineralization to depths of approximately 300 metres below surface 2 .

The previous owners of the Great Pyramid project estimated an Inferred Resource reported under the JORC 2012 guidelines. This resource contains approximately 10,000 tonnes of tin at a grade of 0.2% tin (Table 2). The estimation utilised close spaced historic percussion (~85%) and lesser diamond drill holes with drill spacing in the estimation area typically 15 x 30m and locally closer. Although the resource is defined by close spaced drilling, the resource was classified by the previous owners as Inferred due to the historic nature of the data.  The estimate was reported in the independent geological report prepared by Mining One Pty Ltd for TNT Mines Ltd, dated June 26, 2017 .

The Inferred Resource was estimated using Multiple Indicator Kriging method of 1.5 metre down-hole composites within a mineralized domain interpreted from tin grade. The estimate is restricted to the area of close spaced drilling and 90% of the resource occurs within 40 metres of surface. Although the limited deeper drilling has encountered mineralized material this was not included in the resource. Additional drilling utilising modern drill techniques, analytical techniques and QA/QC will be required to re-estimate the resource and report under NI 43-101.

TinOne is a TSX Venture Exchange listed Canadian public company with a high-quality portfolio of tin projects in the Tier 1 mining jurisdictions of Tasmania and New South Wales, Australia . The Company is focussed on advancing its highly prospective portfolio while also evaluating additional tin opportunities.  TinOne is supported by Inventa Capital Corp.

The Company's disclosure of technical or scientific information in this press release has been reviewed and approved by Dr. Stuart Smith ., Technical Adviser for TinOne. Dr. Smith is a Qualified Person as defined under the terms of National Instrument 43-101.

This news release includes certain "Forward‐Looking Statements" within the meaning of the United States Private Securities Litigation Reform Act of 1995 and "forward‐looking information" under applicable Canadian securities laws. When used in this news release, the words "anticipate", "believe", "estimate", "expect", "target", "plan", "forecast", "may", "would", "could", "schedule" and similar words or expressions, identify forward‐looking statements or information. These forward‐looking statements or information relate to, among other things: the development of the Company's projects, including drilling programs and mobilization of drill rigs; future mineral exploration, development and production; the release of drilling results; and completion of a drilling program.

Forward‐looking statements and forward‐looking information relating to any future mineral production, liquidity, enhanced value and capital markets profile of TinOne, future growth potential for TinOne and its business, and future exploration plans are based on management's reasonable assumptions, estimates, expectations, analyses and opinions, which are based on management's experience and perception of trends, current conditions and expected developments, and other factors that management believes are relevant and reasonable in the circumstances, but which may prove to be incorrect. Assumptions have been made regarding, among other things, the price of gold and other metals; no escalation in the severity of the COVID-19 pandemic; costs of exploration and development; the estimated costs of development of exploration projects; TinOne's ability to operate in a safe and effective manner and its ability to obtain financing on reasonable terms.

These statements reflect TinOne's respective current views with respect to future events and are necessarily based upon a number of other assumptions and estimates that, while considered reasonable by management, are inherently subject to significant business, economic, competitive, political and social uncertainties and contingencies. Many factors, both known and unknown, could cause actual results, performance or achievements to be materially different from the results, performance or achievements that are or may be expressed or implied by such forward‐looking statements or forward-looking information and TinOne has made assumptions and estimates based on or related to many of these factors. Such factors include, without limitation: the Company's dependence on early stage mineral projects; metal price volatility; risks associated with the conduct of the Company's mining activities in Australia ; regulatory, consent or permitting delays; risks relating to reliance on the Company's management team and outside contractors; risks regarding mineral resources and reserves; the Company's inability to obtain insurance to cover all risks, on a commercially reasonable basis or at all; currency fluctuations; risks regarding the failure to generate sufficient cash flow from operations; risks relating to project financing and equity issuances; risks and unknowns inherent in all mining projects, including the inaccuracy of reserves and resources, metallurgical recoveries and capital and operating costs of such projects; contests over title to properties, particularly title to undeveloped properties; laws and regulations governing the environment, health and safety; the ability of the communities in which the Company operates to manage and cope with the implications of COVID-19; the economic and financial implications of COVID-19 to the Company; operating or technical difficulties in connection with mining or development activities; employee relations, labour unrest or unavailability; the Company's interactions with surrounding communities and artisanal miners; the Company's ability to successfully integrate acquired assets; the speculative nature of exploration and development, including the risks of diminishing quantities or grades of reserves; stock market volatility; conflicts of interest among certain directors and officers; lack of liquidity for shareholders of the Company; litigation risk; and the factors identified under the caption "Risk Factors" in TinOne's management discussion and analysis. Readers are cautioned against attributing undue certainty to forward‐looking statements or forward-looking information. Although TinOne has attempted to identify important factors that could cause actual results to differ materially, there may be other factors that cause results not to be anticipated, estimated or intended. TinOne does not intend, and does not assume any obligation, to update these forward‐looking statements or forward-looking information to reflect changes in assumptions or changes in circumstances or any other events affecting such statements or information, other than as required by applicable law.

TinOne Resources. Inc. (TSXV: TORC) (OTCQB: TORCF) (FRA: 57Z0) (" TinOne " or the " Company ") is pleased to announce that it has qualified to trade on the OTCQB® Venture Market in the United States and its common shares are now trading on the OTCQB under the ticker symbol "TORCF". TinOne will continue to trade on the TSX Venture Exchange in Canada under the symbol "TORC" and on the Frankfurt Exchange under the symbol "57Z0".

/THIS NEWS RELEASE IS NOT FOR DISTRIBUTION TO U.S. NEWSWIRE SERVICES FOR DISSEMINATION IN THE UNITED STATES /

TINONE SAMPLES UP TO 4.9% TIN AT THE ABERFOYLE PROJECT, AUSTRALIA

TinOne Resources Inc. (TSXV: TORC) (" TinOne " or the " Company ") is pleased to announce that its initial results from exploration work at the Aberfoyle Project (" Aberfoyle " or the " Project ") in Tasmania, Australia has delineated multiple extensive areas of tin anomalism in surface rock sampling and the Company is progressing toward integrated drill target definition.

Fortune Minerals Limited (TSX: FT) (OTCQB: FTMDF) (" Fortune " or the " Company ") ( www.fortuneminerals.com ) is pleased to announce that, further to the company's news release dated August 16, 2022, it has executed definitive documentation with the holders of its debentures issued in 2015 (the " 2015 Debentures ") to extend their maturity date from August 12, 2022 to November 30, 2022.

The amended and restated debentures (the " Amended Debentures ") have an aggregate principal amount of $12,363,518, being the total principal amount and all accrued interest on the 2015 Debentures as at August 12, 2022, bear interest at a rate of 10% per annum for the extension period and are secured by all of the assets of the Company (including the NICO cobalt-gold-bismuth-copper project (" NICO Project ")). As additional consideration for the extension of the maturity date, the Company has issued to the holders of the Amended Debentures an aggregate of 3,500,000 common shares of the Company. The shares are subject to a hold period of four months and one day from the date of issuance.

Avalon Advanced Materials Inc. (TSX: AVL) (OTCQB: AVLNF) ("Avalon" or the "Company") is pleased to provide an update on its preparations for the installation and commissioning of its demonstration Dense Media Separation ("DMS") plant for the Separation Rapids Lithium Project north of Kenora, Ontario.

Roadwork and site preparation work for the installation and commissioning of the DMS plant have commenced at the Avalon Quarry site along the Avalon Road to the Separation Rapids project site. The Avalon Quarry site is a permitted Aggregate Quarry located approximately 2 km north of the Sand Lake Road and approximately 7 km south of the project site. Aggregate for the road work will be produced at this Quarry as part of an initiative to prepare the road for heavy equipment transport and to prepare the site for the DMS plant installation.