Snowline Gold Corp. (CSE:SGD) (US OTC:SNWGF) (the "Company" or "Snowline") is pleased to provide an update on its exploration activities on its flagship Rogue project in the Yukon, Canada. Holes V-21-001 and V-21-002, the first two holes ever drilled into Snowline's "Valley" gold target, both intersected trace amounts of visible gold across much of their 161 m and 242 m lengths in quartz veins associated with a previously untested reduced-intrusion related gold system. Targeting efforts prior to drilling revealed an open, 900 x 150 m zone of anomalous gold-in-soils associated with a recently identified intrusion accompanied by sheeted quartz veins assaying to 15.95 gt Au

"Visible gold mineralization at Rogue marks Snowline's second drill discovery in as many drill campaigns this season. We await assay results for the full story," said Scott Berdahl, CEO and Director of Snowline Gold Corp. "Those new to Snowline may be surprised at the apparent success of our inaugural season. But while we are a newly listed company, this is not a new endeavour. We were built on over three decades of mostly private Yukon-focused exploration. Our flagship projects have taken various forms over the past 11 years, with millions spent on baseline data collection yielding promising targets and ideas. Snowline is now well-positioned to reap the benefits. We are fortunate to begin our journey at the drill discovery phase-the steepest value-add in the mining life cycle-and we are just getting started. Our recent successes further validate Snowline's driving thesis of a new gold district in the Selwyn Basin spanning multiple deposit types across our Rogue, Einarson and Ursa projects." 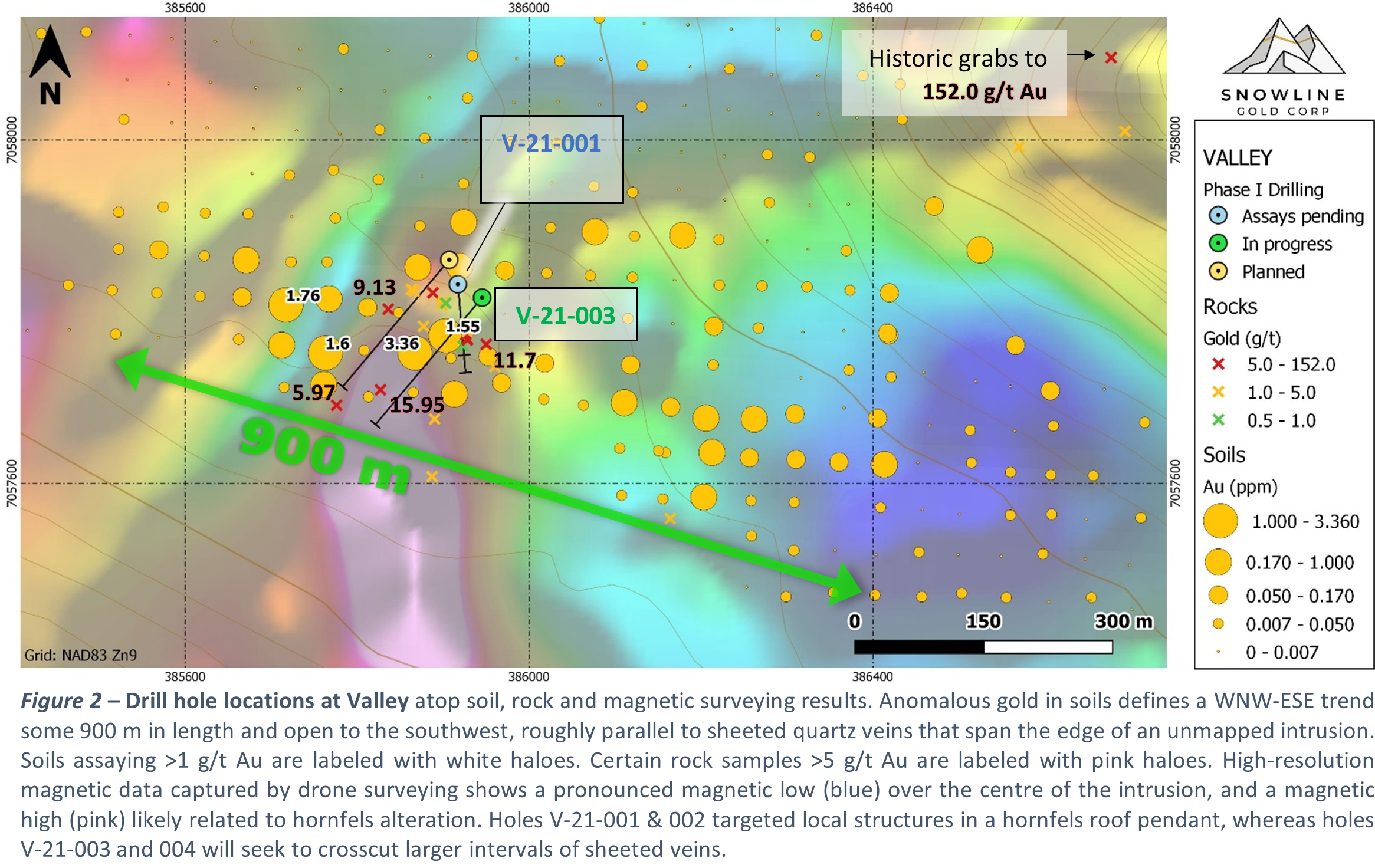 Holes V-21-001 and 002 were drilled from a single pad along an azimuth of 175°, dipping 50° and 70° (Figure 2). Visible gold encountered in drill core occurs as grains roughly 0.1-0.5mm in size within centimetre-scale, sheeted quartz veins that are present at varying densities per metre throughout both holes. In hole V-21-001, at least 28 of these small quartz veins contain visible gold, with up to five grains observed in a single vein crosscutting core. In hole V-21-002, instances of visible gold are observed through to 217.5 m depth (total hole depth 242 m). Sheeted veins are present in both hornfels sedimentary rocks and in a dominantly diorite to quartz-diorite intrusion (Figure 3). This intrusion does not appear on current geological maps, but based on nearby mapped intrusions, it is likely a member of the Mayo plutonic suite, a series of Cretaceous-aged felsic intrusions responsible for significant gold deposits including Fort Knox in Alaska and the Eagle gold mine in the Yukon Territory. 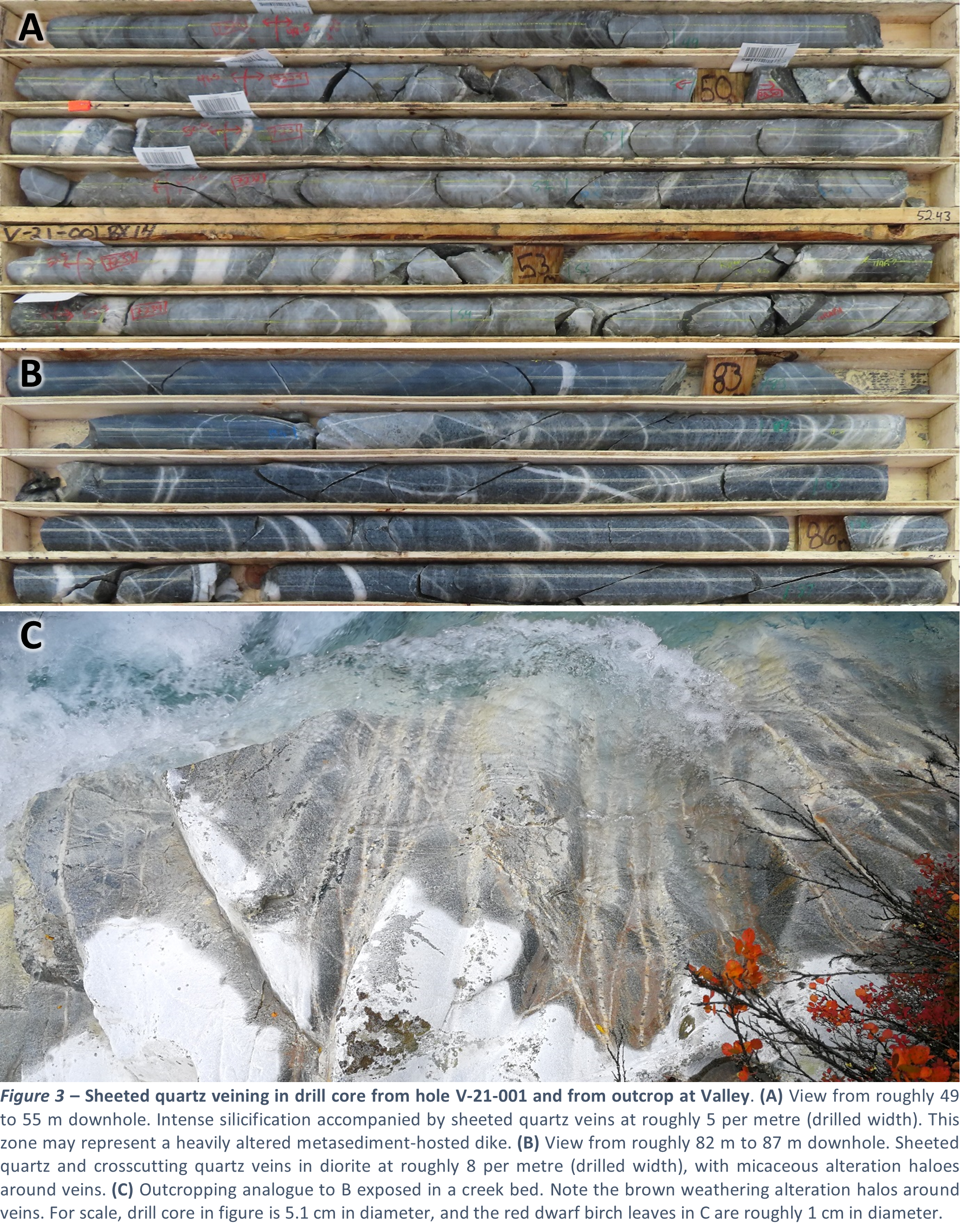 The drill discovery caps off a busy season of careful advancement and targeting by Snowline at Valley (Figure 2), comprising soil sampling, prospecting, preliminary geological mapping, and drone-supported detailed magnetic surveying and orthophotography across the target. Some 376 grid soils were collected at Valley, with partially returned assay results revealing a 900 m x 150 m zone of elevated and anomalous soils. Four soil samples received to date returned greater than 1 g/t Au, to a maximum of 3.36 g/t Au. Prospecting and preliminary geological mapping revealed a broad zone of sheeted veining striking WNW-ESE coincident with the soil anomaly. Grab samples of vein material commonly ranged from 2 g/t Au to 16 g/t Au, though readers are cautioned that overall grade in such systems commonly depends on vein densities in addition to grade. A 411-line-kilometer magnetic survey conducted by EarthEx Geophysical Solutions revealed the extent of the mostly covered intrusion and associated structures and will be useful in guiding Snowline's drill exploration efforts. 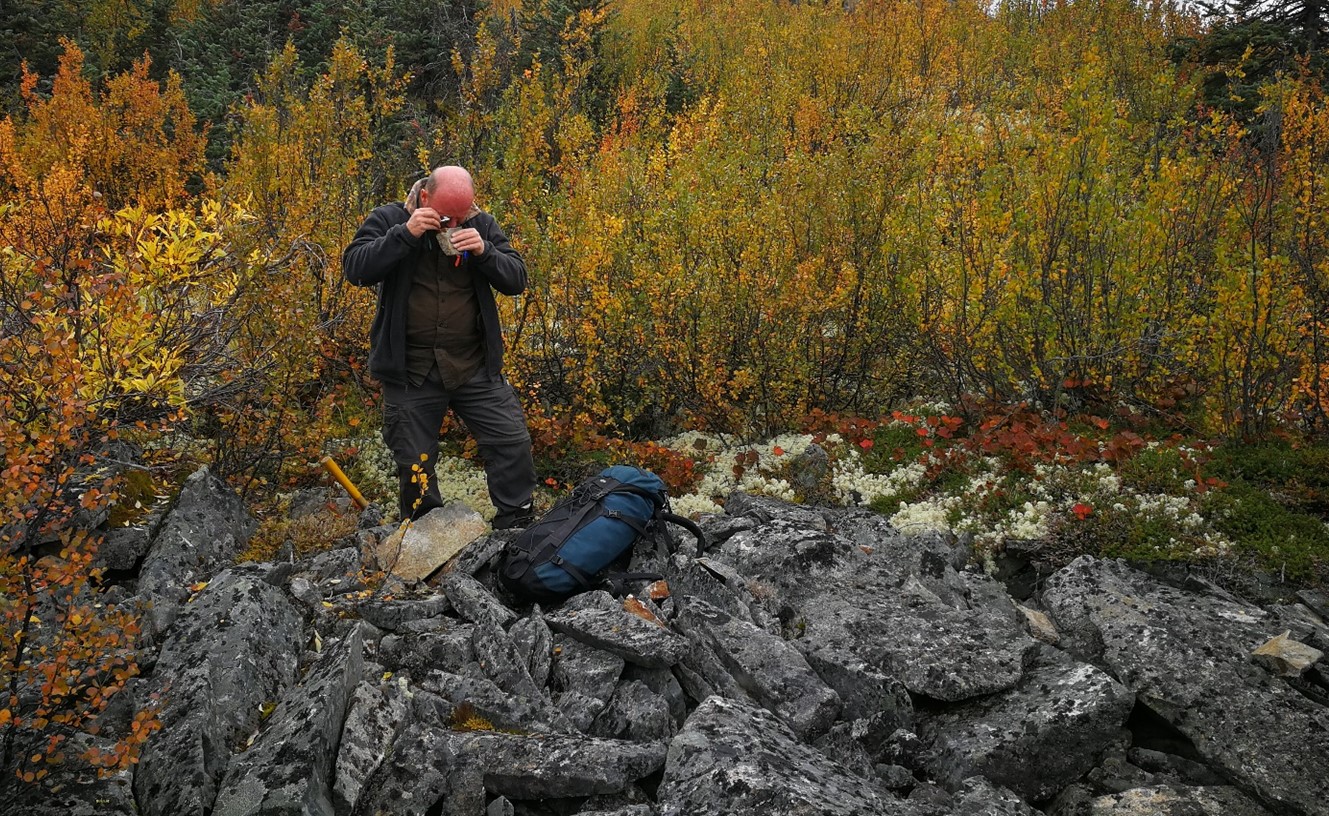 While encouraged by the discovery of visible gold in V-21-001 and 002, the company cautions that its true significance will not be known until drill hole assay results are available. Given laboratory wait times of 1-2+ months, these results are unlikely to be available in the near term. In known deposits of this type, the density of sheeted veining is as important as the grade of the veins as the host rock is commonly barren. No resources nor reserves have been calculated at Rogue, and while current results are encouraging, they do not guarantee that economically viable ore bodies will be encountered at the Valley target or elsewhere. 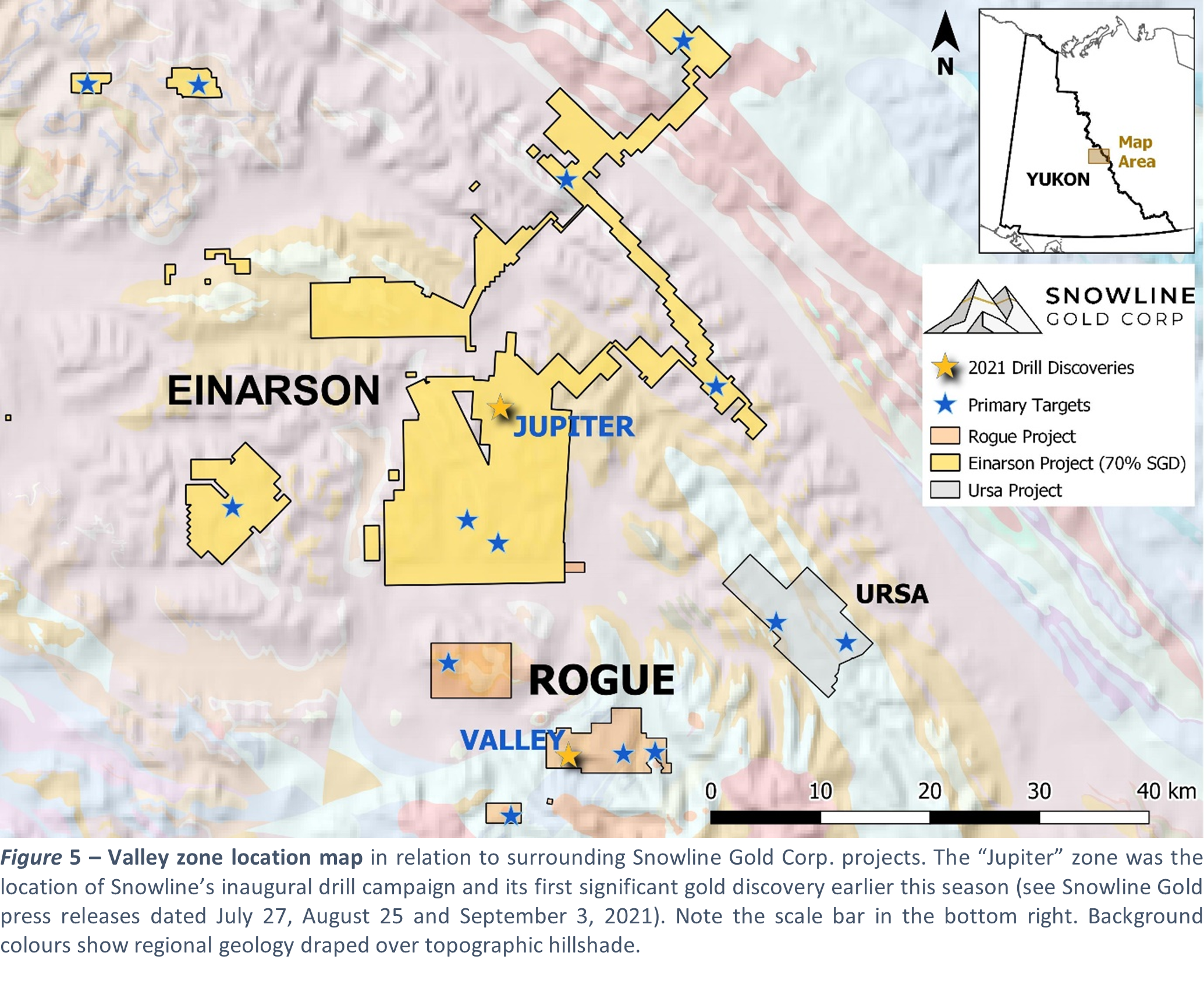 Snowline Gold Corp. is a Yukon Territory focused gold exploration company with a seven-project portfolio covering >90,000 ha. The Company is exploring its flagship 72,000 ha Einarson and Rogue gold projects in the highly prospective yet underexplored Selwyn Basin. Snowline's project portfolio sits within the prolific Tintina Gold Province, host to multiple million-ounce-plus gold mines and deposits including Kinross' Fort Knox mine, Newmont's Coffee deposit, and Victoria Gold's Eagle Mine. Snowline's first-mover land position provides a unique opportunity for investors to be part of multiple discoveries and the creation of a new gold district.

Labyrinth Resources Limited (‘the Company’ or ‘Labyrinth’) (ASX: LRL) is pleased to report on a successful quarter that saw it continue to add significant value to its flagship Labyrinth Gold Project in Canada and prepare for its maiden drilling program at the Comet Vale project in WA.

Barrick Gold Corporation (NYSE:GOLD) (TSX:ABX) Africa's largest gold mine, Kibali, is again on track to replace its reserves beyond the ounces depleted by mining in the previous year, while new growth opportunities will also support its +10-year business plan and its status as one of Barrick's Tier One 1 assets.

Barrick president and chief executive Mark Bristow told media here today that Kibali's prolific KCD orebody was continuing to deliver additional value with current drilling focused on converting resources into reserves and exploring the lodes which are still open down plunge. In addition, the Mengu Hill, Ikanva and Gorumbwa targets are showing the potential for joining Kibali's underground portfolio.

Greenstone Resources Limited (ASX:GSR) (Greenstone or the Company) is pleased to provide an update on exploration activities at its flagship Burbanks Gold Project, with further results from the Phase-1 drill campaign continuing to reaffirm the high-grade nature of Burbanks, while also extending the known mineralised strike horizon by 25%.

The Board of Breaker Resources NL (ASX:BRB, Breaker, or the Company) is pleased to report on a transformational quarter:

All amounts expressed in US dollars

Barrick Gold Corporation (NYSE:GOLD)(TSX:ABX) –Seventeen years after it went into production, Barrick's Loulo-Gounkoto mining complex in Mali continues to demonstrate its value as a key socio-economic partner to the country.

Pam Raises $4,500,000 At A Premium Price To Support And Develop The Company’s Strategy To Become A Leading Supplier Of Battery Chemicals In Southeast Asia