Snowline Gold Corp. is pleased announce that its fully funded 2021 exploration program is set to commence the first week of June. Exploration will focus on its flagship Einarson and Rogue projects in the Selwyn Basin, Yukon Territory, with targeted programs at its regional assets. Discovery-stage drilling at Einarson and Rogue is designed to follow up multiple zones of high-grade gold found on surface . Geological …

Snowline Gold Corp. (CSE:SGD) (OTC PINK:SNWGF) (the “Company” or “Snowline”) is pleased announce that its fully funded 2021 exploration program is set to commence the first week of June. Exploration will focus on its flagship Einarson and Rogue projects in the Selwyn Basin, Yukon Territory, with targeted programs at its regional assets. Discovery-stage drilling at Einarson and Rogue is designed to follow up multiple zones of high-grade gold found on surface (up to 34 gt Au at Einarson & up to 152 gt Au at Rogue). Geological programmes will also include the assessment of structural and lithological controls on mineralization in the region. Snowline

Snowline’s COVID-19 operational plan has been approved by the Yukon Government and will safeguard Snowline’s employees, its service providers, and the Yukon communities in which it operates. The company has also been awarded a $40,000 grant from the Yukon Government to support its initial exploration of the nearby Ursa project.

“We have a lot to look forward to this season,” said Nikolas Matysek, CEO and Director of Snowline Gold. “Our initial exploration campaign is set to test some very low hanging fruit, including some previously untested areas. We’re excited to put the initial drill holes in at Einarson’s “Mars NE” zone and Rogue’s “Valley” zone, both of which have significant potential.”

“Limited exploration to date in the broader Rogue, Einarson and Ursa area has focused largely on constrained targets and deposit models,” added Scott Berdahl, Snowline Gold‘s COO. “At Snowline we’ve recognized the potential for a continuum of near-surface gold deposit types across these three adjacent Selwyn Basin projects. Possible end-member analogues include some of the world’s better-known districts and deposits, like Nevada’s Carlin trend and Australia’s Fosterville and Bendigo districts for Einarson, Alaska’s Fort Knox deposit for Rogue, and Russia’s Sukhoi Log deposit for Ursa.”

Einarson encompasses multiple kilometres-scale soil and stream sediment anomalies in carbonate and siliciclastic stratigraphy prospective for Carlin-type and epizonal orogenic gold deposits within a 61,000 hectare regional-scale property. The 2021 drill program will test the Mars NE zone, a 3-kilometre zone of anomalous gold in soils accompanied by at least three interpreted source areas for mineralized quartz float, which commonly assays in the range of 1 to 7 g/t Au, up to a maximum of 25 g/t Au. Early season geochemical, drone surveying, trenching and mapping work at Mars NE will allow for efficient use of the drill and increase the odds of a successful drill discovery.

Additional mapping and sampling will aim to identify the source area for another mineralized quartz float train in the Avalanche Creek zone, discovered in late 2020 roughly 12 kilometers south of Mars NE along strike of a regional fault structure. Twenty-two grab samples of the float train averaged 7.8 g/t Au and graded up to 34.2 g/t Au.

Regional prospecting will seek to identify other instances of this newly-identified style of shallow orogenic mineralization along this relatively unexplored trend, and along adjacent, parallel regional fault structures and anticlines that could host similar mineralization. 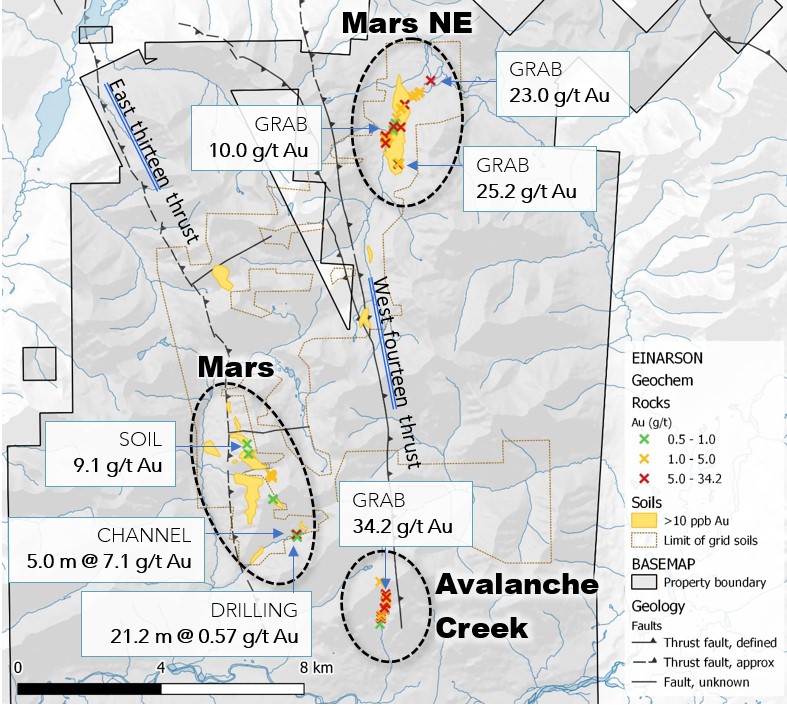 Figure 1 – Historical geochemical results from the southern Einarson property. To date, the only drilling on this part of the project took place at the south end of the Mars target and suffered poor recoveries in mineralized zones.

At the 11,000 hectare Rogue project, grid and contour geochemical sampling is planned to infill data gaps at the Valley zone, prior to the commencement of drilling later in the summer where surface grab samples with visible gold have assayed up to 152 g/t Au and – distal to the visible gold and other known showings-a single soil line yielded a gold-in-soil value of 4.6 g/t Au. Drone supported, high-resolution orthophotography and digital elevation model generation will provide a baseline for mapping and geochemical sampling. A second drone survey will provide detailed magnetic information over the Valley zone, providing the 3D geometry of the intrusion and associated alteration below the surface. All of the above will be used for targeting of first-pass drilling in the Valley zone.

Contour soil sampling, prospecting and geological mapping will be performed across the greater Valley-Gracie trend, and on secondary claim blocks, to assess for additional targets. If conditions permit, a broader drone-supported aerial magnetic survey will extend from the Valley zone to include the Gracie zone and the remainder of a prominent 9-kilometer east-west trend of hornfels connecting the zones. 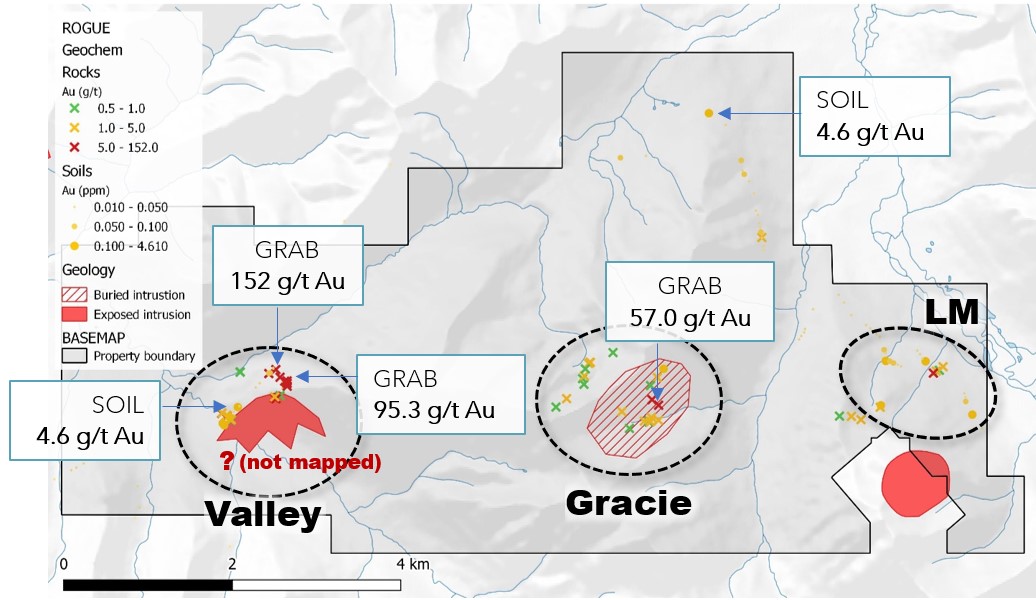 Figure 2 – Historical sampling results at the central “Arrowhead” block of the Rogue project. At the Valley target, visible gold has been identified in near-source float specimens grading to 152 g/t Au. The intrusion in the Valley zone was recently discovered and has yet to be fully mapped to the south. The buried intrusion in the Gracie zone is suspected based on rock alteration and geophysical response but has not yet been confirmed by drilling.

The 7,755 hectare Ursa property covers two distinct geochemical trends: a 9 km-long trend of elevated to anomalous gold in stream sediment and soil samples, and a roughly parallel 14 km-long trend of elevated to highly anomalous zinc accompanied by elevated silver, copper, molybdenum, nickel and vanadium. Ursa’s proximity to Snowline’s flagship Rogue and Einarson projects allows for efficient exploration during the 2021 field season. Geochemical sampling, prospecting and mapping are planned to better understand the sources of the gold and base metal anomalies. Based on these results, geophysical surveying, surface trenching and initial drill testing may be conducted later in the season. The 2021 program at Ursa will be supported in part by a $40,000 exploration grant from the Yukon Government.

The 3,700 hectare Tosh Project, located in the southwestern Yukon, bears many hallmarks of a significant orogenic gold camp. Host rocks are high-strain schists and intercalated marbles of the Yukon Tanana terrane. In 2021 at Tosh, Snowline plans to advance existing and regional targets with detailed stream sediment and soil surveys. Geophysical surveying and geological mapping further contribute to the establishment of definite drill targets.

Targeted geological programs at Snowline’s other assets including the Cliff, Rainbow and Cynthia projects, will serve to advance our understanding of mineralizing systems with the goal of advancing these projects to a drill-ready stage.

Information in this release has been reviewed and approved by Scott Berdahl, P. Geo., Chief Operating Officer of Snowline and a Qualified Person for the purpose of NI 43-101. Mr. Berdahl has visited and sampled all target zones mentioned in this release, apart from the base metal target at Ursa, where he nonetheless planned and oversaw a large soils survey in 2013.

Snowline Gold Corp. is a Yukon Territory focused gold exploration company with a 7-project portfolio covering over 90,000 ha. The Company is exploring its flagship 72,000 ha Einarson and Rogue gold projects in the prospective yet underexplored Selwyn Basin, with drilling expected to commence in June 2021. Snowline’s projects all lie in the prolific Tintina Gold Province that hosts multiple million-ounce-plus gold mines and deposits, from Kinross’ Fort Knox mine to Newmont’s Coffee deposit. Snowline’s first mover claim position represents a unique opportunity to explore and expand a new greenfield, district-scale gold system.

This news release contains certain forward-looking statements, including statements about the Company reviewing its newly acquired project portfolio to maximize value, reviewing options for its non-core assets, including targeted exploration and joint venture arrangements, conducting follow-up prospecting and mapping this summer and plans for exploring and expanding a new greenfield, district-scale gold system. Wherever possible, words such as “may”, “will”, “should”, “could”, “expect”, “plan”, “intend”, “anticipate”, “believe”, “estimate”, “predict” or “potential” or the negative or other variations of these words, or similar words or phrases, have been used to identify these forward-looking statements. These statements reflect management’s current beliefs and are based on information currently available to management as at the date hereof.

Snowline Gold: A Cornerstone Position in a New Gold District in the Yukon