Prismo Metals Inc. is pleased to announce that on Tuesday, October 6th, 2020 at 4:15 pm EDT it will hold a call to introduce investors to the Company. Investors can join the call by using the following link: Making the presentation will be Dr. Craig Gibson, President and CEO and Dr. Peter Megaw, Ph. D. & C.P.G., an advisor to Prismo. Investor questions are encouraged and may be directed prior and during the call to …

Prismo Metals Inc. (CSE: PRIZ) (the “Company” or “Prismo”) is pleased to announce that on Tuesday, October 6th, 2020 at 4:15 pm EDT it will hold a call to introduce investors to the Company. Investors can join the call by using the following link: https:us02web.zoom.usj81783271513

Making the presentation will be Dr. Craig Gibson, President and CEO and Dr. Peter Megaw, Ph. D. & C.P.G., an advisor to Prismo. Investor questions are encouraged and may be directed prior and during the call to jason.frame@prismometals.com

Dr. Craig Gibson has been active in the minerals industry for more than thirty years with almost twenty of them working in Mexico. He received his B.S. (1984) in Earth Sciences from the University of Arizona and M.S. (1987) and Ph.D. (1992) in Economic Geology and Geochemistry from the Mackay School of Mines, University of Nevada, Reno. Dr. Gibson has been involved in several major precious metal deposit discoveries in Mexico with public and private companies. He co-founded ProDeMin based in Guadalajara, Mexico, in 2009, a consulting firm providing a broad spectrum of exploration related services to the mining industry. Dr. Gibson is also a Director of Garibaldi Resources Corp. (TSXV: GGI), a Vancouver based junior exploration company. He is a Certified Professional Geologist of the American Association of Professional Geologists and is a Qualified Person under NI 43-101.

Dr. Megaw, Ph.D., C.P.G., received his doctorate from the University of Arizona and more than 35 years of experience exploring for silver and gold in Mexico. He is a Certified Professional Geologist by the American Institute of Professional Geologists and an Arizona Registered Professional Geologist. Dr. Megaw discovered MAG Silver’s Juanicipio silver deposit, MAG Silver’s Cinco de Mayo project and new ore bodies at Excellon Resources’ Platosa Mine. Dr. Megaw is the author of numerous scientific publications on ore deposits and is a frequent speaker at academic and international exploration conferences. He was also awarded the 2017 Thayer Lindsley Award for the 2003 discovery of the Juanicipio silver deposit in the Fresnillo District, ultimately leading to a further 600 million ounces being identified in the immediate area.

The principal shareholders of Prismo are ProDeMin which owns 2,500,000 common shares and Minera Cascabel S.A. de C.V., (“Cascabel“) a private Mexican exploration company which owns 2,000,000 common shares and was founded 32 years ago by Dr. Megaw, Ing. Porfirio Padilla Lara and two other associates. Cascabel has generated exploration projects and provided business and technical support to a broad range of international companies operating in Mexico ever since.

Prismo is engaged in the business of mineral exploration and the acquisition of mineral property assets in Mexico. Its objective is to locate and develop economic precious and base metal properties of merit. Further to this objective, the Company entered into an option agreement with Prospeccion Y Desarrollo Minero Del Norte, S.A. de C.V. (“ProDeMin“), effective May 7, 2019, pursuant to which it was granted the option to acquire a 75% interest in the Palos Verdes Property, which constitutes the material property of the Company. Prismo’s Palos Verdes Project lies within the historic Panuco-Copala silver-gold district in Sinaloa, Mexico where Vizsla Resources Corp. (TSXV: VZLA) have reported considerable success recently. 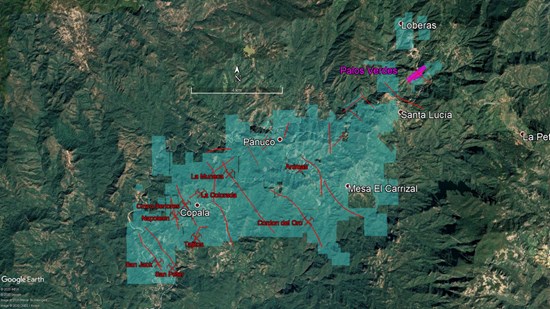 The Panuco-Copala district is characterized by a swarm of north to northwesterly oriented veins that stretch laterally for 15 km along a northeast-southwest trend. Northeasterly-trending veins that link and/or cross the northwesterly veins are locally well developed within the district. The eastern part of the district is topographically much higher than the western zone where veins are prominently exposed. Vein outcrops are subtle in the eastern zone, suggesting they are exposed at a much higher level and have not lost their uppermost high-grade zones to erosion.

*True width estimated based on the drill hole azimuth and inclination and vein dip.

To view the source version of this press release, please visit https://www.newsfilecorp.com/release/65232