These new intercepts verify the continuity of gold mineralization along the main vein structure East of Pit #1 and support the extent of high-grade gold.

Granada Gold Mine Inc. (TSXV:GGM) (OTC:GBBFF) (Frankfurt:B6D) (the "Company" or "Granada") is pleased to announce additional drill results from its on-going drill program at its Granada Gold project with multiple new assays from its 200-Series drill holes with grades of up to 7.16 gt Au over 5.60m and 95.00 gt Au over 0.50m

- These assay results confirm the significant extent of localized high-grade gold mineralization within the structure as well as prove the continuity of the mineralization over much broader intervals up to 263m down-dip of the main zone below Pit #1.

"The assay results in these drill holes proved the continuity along the main structure and confirmed the extent to depth of high-grade gold mineralization. This supports the view that our gold grades and occurrences are continuous and have substantial thickness to the zone." said Frank J. Basa, P.Eng., President and CEO.

The mineralized zone beneath the eastern extension of Pit #1 contains a collection of multiple veins with sulfide mineralized halos. The zone contains 3 distinct sub-parallel mineralized veins which connect with the former Pit #1 to the west. The true thickness of these mineralized structures varies between 2m and 11 m. The main zone of these 3 structures is what was tested with the 200-Series drill holes. 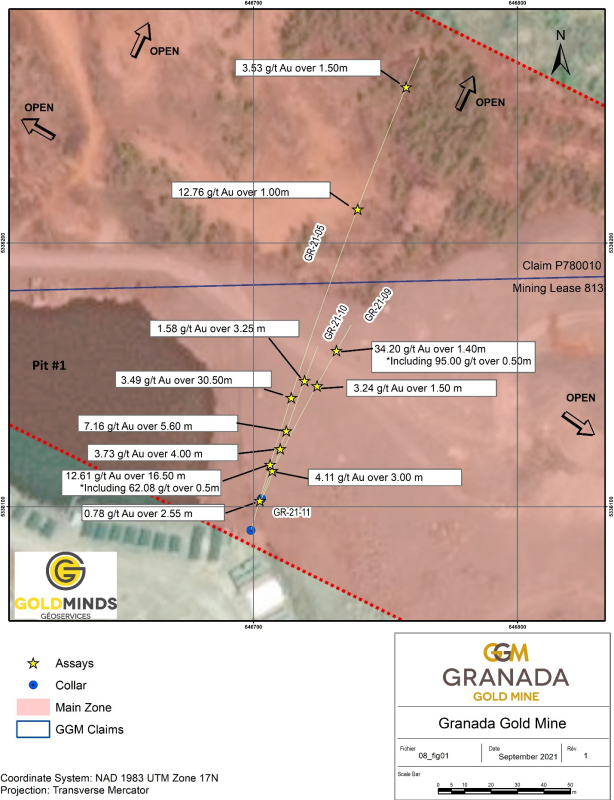 The 200-Series holes were designed with an azimuth of 10-30 degrees to the north attempting to drill down the vein structures as opposed to obliquely. Normally, the drill holes are aimed southward which are designed to intersect the structures at a high angle, with an azimuth in the general range of 170-190 degrees. Previous intercepts into this structure have returned 6.95 g/t gold over 3.50 meters ( true thickness) in hole GR-11-380 (Press release September 18, 2012), and 11.45 g/t gold over 33.00 meters in hole GR-19-A (Press Release January 9, 2020). The grades we see in the 200-Series drill holes validate the grades encountered previously in other drill programs and confirm the continuity of the gold mineralization. It also demonstrates that the system is a multi-vein system (as opposed to a single discrete vein). This is why the true thickness of the gold mineralization at Granada varies significantly from small high-grade intervals, such as 95.00 g/t over 0.50m, to even 0.31 g/t over 301m (Press Release September 18, 2012) depending on the location within the property and cut-off grade used for the calculation.

The Granada Gold project is located near Rouyn-Noranda adjacent to the prolific Cadillac Break shear zone, which is hosted in Pontiac metasedimentary rocks, granites, and younger syenite sills along the Granada shear zone (LONG Bars Zone). The project is located on the same side of the Cadillac Fault as the Canadian Malartic mine property, which has historically produced 12.7 million Ounces of gold from 1935 to 2010 with an additional 5 million ounces as of June 18, 2020 (Canadian Malartic Technical Report of March 25, 2021 & Le Citoyen June 19, 2020).

The technical information in this news release has been reviewed by Claude Duplessis, P.Eng., GoldMinds Geoservices Inc., a member of the Québec Order of Engineers, and is a qualified person in accordance with the National Instrument 43- 101 standards.

All NQ core assays reported for Wedges of 2020 holes were obtained by either 1-kilogram screen metallic fire assay or standard 50-gram fire assay (with either atomic absorption or gravimetric finish). This was completed at the SGS Laboratory in Vancouver, British Columbia with the sample preparation completed in Val d'Or, Québec. The 2021 assay results are from ALS laboratory in Val d'Or. The screen metallic fire assay method is pre-selected by the geologist or geological engineer when samples contain visible gold. The drill program, quality assurance, quality control (QAQC), and interpretation of results is performed by qualified persons employing procedures consistent with NI 43-101 and industry best practices. Standards and blanks are included with every 20 samples for QAQC purposes for this program in addition to the lab QAQC.

Granada Gold Mine Inc. continues to develop and explore its 100% owned Granada Gold Property near Rouyn-Noranda, Quebec, and is adjacent to the prolific Cadillac Break. The Company owns 14.73 square kilometers of land in a combination of mining leases and claims. The company is currently undergoing a large drill program with 30,000m out of 120,000m complete. The drills are currently paused to provide the technical team with the necessary time to evaluate and assimilate existing data.

What factors are responsible for that broad range? The US Federal Reserve played a role mid-week.

The central bank's first meeting of the year ran from Tuesday (January 31) to Wednesday (February 1), and it ended with an interest rate hike of 25 basis points, the smallest since last March. The Fed's benchmark interest rate now sits at 4.5 to 4.75 percent.