Endurance Gold Corporation is pleased to report assay results from the five reverse circulation drill holes completed at the Imperial Zone of the Reliance Gold Property in southern British Columbia. The Property is located 4 kilometres east of the village of Gold Bridge with year-round road access, and 10 km north of the historic Bralorne-Pioneer Gold Mining Camp which has produced about 4 million ounces of gold. …

Endurance Gold Corporation (TSXV:EDG) (the “Company”) is pleased to report assay results from the five (5) reverse circulation (“RC”) drill holes completed at the Imperial Zone of the Reliance Gold Property (the “Property”) in southern British Columbia. The Property is located 4 kilometres (“km”) east of the village of Gold Bridge with year-round road access, and 10 km north of the historic Bralorne-Pioneer Gold Mining Camp which has produced about 4 million ounces of gold. These five drill holes were planned to intersect near-surface gold mineralization of the Imperial Zone that was untested by historic drilling. The 2020 drill program also tested under the Imperial North Zone identified in 2020 channel sampling. Results are reported below

“These encouraging drill hole results at the Imperial Zone are located 380 metres away from our previously reported high-grade Eagle Zone results. Both zones are hosted within the two kilometer long, largely un-tested Royal Shear trend and demonstrate that the Reliance Property is host to a robust “Epizonal” Orogenic gold mineralizing system” stated Robert Boyd, CEO of Endurance Gold “In addition, the excellent estimated true widths of higher-grade gold at both Imperial and Eagle Zones provide encouragement that tonnes per vertical metre could accumulate quickly when ultimately defined”.

Imperial Zone – Drill hole RC20-006 intersected 13.7 metres (“m”) grading 3.26 gram per tonne gold (“gpt Au”) including a higher grade interval of 4.6 m grading 7.23 gpt Au. The hole successfully intersected mineralization within 30 m of surface and represents a 40 m up-dip expansion of the Imperial Zone as shown on Section 5636050N appended to this release. Geologic modelling indicates that the Imperial Zone has a down-dip extent of 290 m and open to expansion with a southwest plunge of -55 degrees. Historic drilling between 1986 and 2008 defined a higher-grade core of the mineralized zone with an approximately true width of 10 to 15 m. The strike extent of the Imperial Zone has been poorly constrained by drilling with very few intersections or testing along strike.

The Imperial Zone was discovered by drilling in 1986 with DDH_1986-01 which returned 18.3 m grading 7.01 gpt Au. Other highlight historic drill intervals at the Imperial Zone include 38.1 m grading 9.61 gpt Au from DDH_87-02, and 33.5 m grading 6.69 gpt Au from DDH_2004-01. These historic drill holes were completed prior to the implementation of NI 43-101 and CIM Best Practices for Exploration and thus professional verification by the Company is not possible and historic results should be evaluated with caution. The Imperial Zone was partially validated in 2008 with eight (8) diamond drill holes that were completed and documented in professional manner by the prior owner. Holes DDH_I08-0004 and DDH_I08-0005 intersected the higher-grade Imperial Zone and returned 12.0 m grading 5.70 gpt Au and 17.7 m grading 4.76 gpt Au, respectively.

Near-surface gold mineralization up-dip of the Imperial Zone was also intersected with drill holes RC20-003 and RC20-005. The lower-grade mineralization is interpreted to represent the outer halo of the Imperial Zone which has been displaced by approximately 20 m due to a previously unknown fault. RC20-003 intersected 4.6 m grading 1.36 gpt Au while RC20-005 returned 4.6 m of 0.84 gpt Au.

Imperial North – Two holes were completed at Imperial North to test for gold mineralization below the outcrop channel samples that returned 6.7 m grading 3.14 gpt Au (see News Release November 23, 2020). Drill holes RC20-001 and RC20-002 intersected near-surface mineralization including 6.1 m of 2.85 gpt Au and 3.0 m of 1.9 gpt Au, respectively as shown on the plan map attached to this release. These results are insufficient to define the structural attitude of the Imperial North Zone nor the structural relationship with the higher grade Imperial Zone. Further work will be completed in the 2021 field season incorporating new ideas on geologic controls.

RC samples were collected under the supervision of a geologist at the drilling rig. Drilling was completed using a 3.5 inch hammer bit and rock chip samples were collected using a cyclone. Sample size were reduced to 1/8th size with a riffle splitter at the drilling rig. A second duplicate split and coarse chips were collected for reference material and stored. All RC samples were submitted to ALS Global in North Vancouver, BC, an ISO/IEC 17025:2017 accredited laboratory, where they were crushed to 70% <2 mm then up to 250 gram pulverized to <75 microns. Samples were then submitted for four-acid digestion and analyzed for 48 element ICP-MS (ME-MS61) and gold 30g FA ICP-AES finish (AU-ICP21). Over limit samples returning greater than 10 ppm gold were re-analyzed by Au-GRA21 methodology and over limit antimony returning greater than 10,000 ppm Sb were re-analyzed by Sb-AA08 methodology. The work program was supervised by Darren O’Brien, P.Geo., an independent consultant and qualified person as defined in National Instrument 43-101. Mr. O’Brien has reviewed and approved this news release.

Historic assay composites quoted herein are calculated using assay results acquired from various sources and previous operators. Historic assay results from drill holes completed between the years 1986 to 1988 were hand written on paper drill logs and no original assay certificates exist. Assay results for the 2004 drill holes were digitized from scanned assay certificates included in the appendix of a BC government assessment report. Assay results from the 2008 drill holes are from a digital database acquired from a previous operator but without assay certificates. While Endurance Gold believes these results are valid, investors are cautioned that errors could exist in the historic dataset. Endurance Gold will continue to validate these historic results with its ongoing exploration programs. 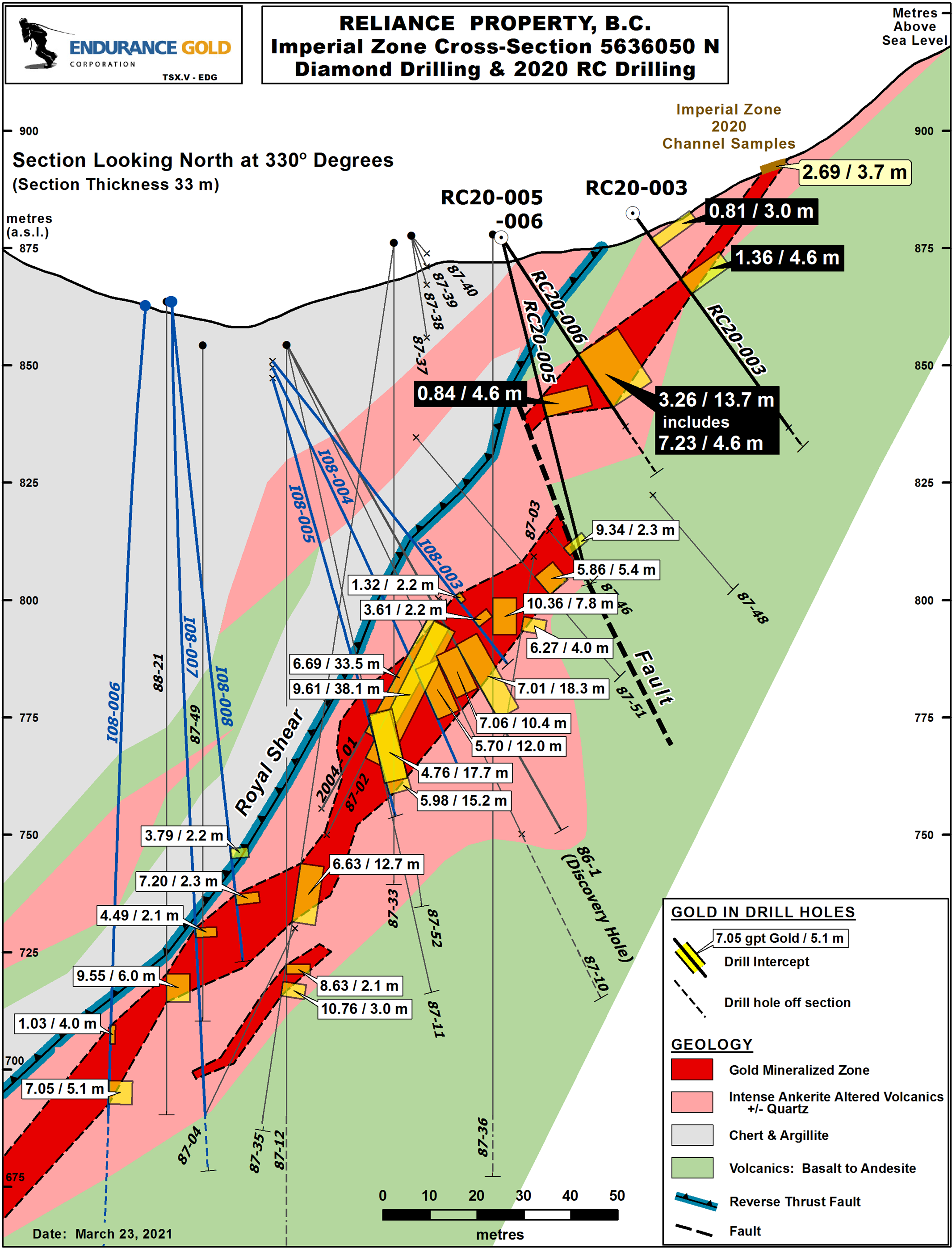 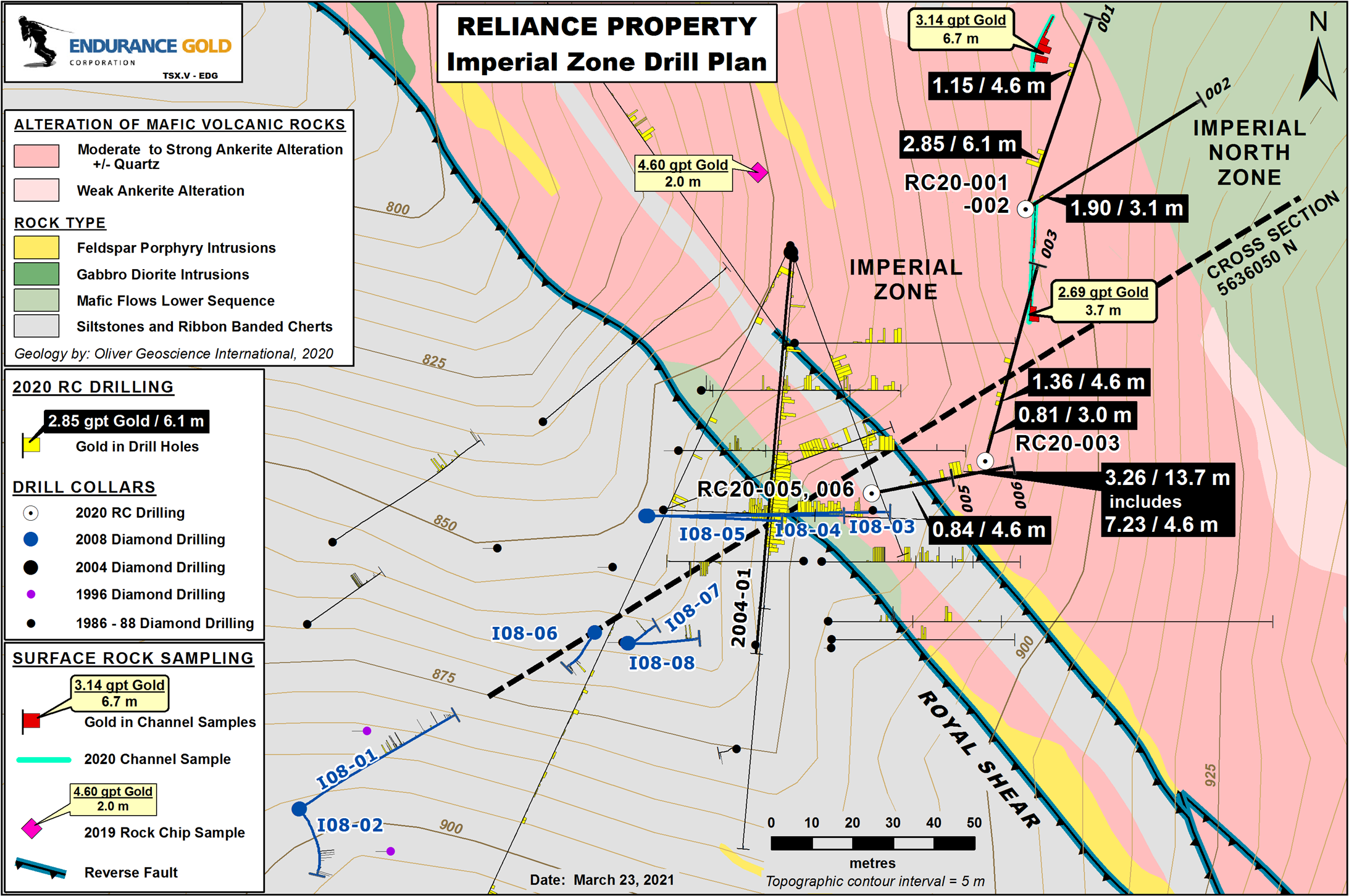