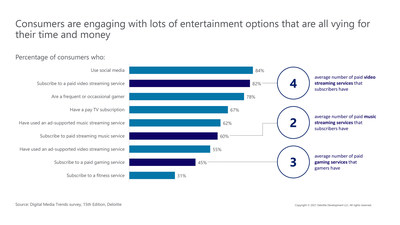 Why this matters
Deloitte’s annual ” Digital Media Trends ” survey, 15 th edition, found a world reshaped by pandemic-driven trends; and one where streaming video and subscription services have revolutionized the traditional U.S. media and entertainment industry. The online survey of 2,009 U.S. consumers, conducted in February 2021 , also revealed there is growing competition for audiences among a crowded field of streaming video providers, but also with other forms of entertainment, including music, video gaming and social media services. In this world of limitless choice, consumers can easily jump to competitors or other forms of entertainment as they weigh cost, content and ad-tolerance, making it challenging for media companies to earn consumer loyalty and cultivate enduring customer relationships.

Consumers love video, but it’s not the only show in town
U.S. consumers have access to multiple free and paid entertainment options that are all competing for their attention and loyalty. However, all these different options are dividing and fragmenting the market and challenging providers to understand the nuances among segments, generations, and differing kinds of media.

Courting the consumer with cost and content
Consumers find it frustrating to manage and pay for a plethora of streaming video services that are now available. As they chase niche content and trending entertainment, consumers are also showing strong interest in ad-supported options that subsidize or remove subscription costs. However, from October 2020 to February 2021 , Deloitte found that the churn rate for streaming video services is still hovering around 37%.

Key quote
“Not only are American consumers more reliant than ever on digital media and entertainment, information gathering and social connection, there is also more competition for audiences among a crowded field of entertainment options. This requires consumers to ‘dance’ between services introducing frustrations as they try to manage multiple subscriptions and keep track of their favorite content. Media and entertainment companies with a deeper understanding of customer concerns about content, cost and ad-tolerance across all entertainment options and generations, can cultivate long-term relationships and reduce churn.”

Generation Z prefers gaming and music
Generation Z has strikingly different entertainment preferences, often seeking video games and music over watching TV and movies — unlike older consumers who are “video first.” As early adopters, Generation Z may actually influence the behaviors of Millennials and Generation X — and possibly younger generations that follow them.

Social media is a gateway to entertainment and information, but trust is a concern
Beyond connection and sharing, social media services have become a gateway for consuming music, video, games and news. However, there is tension between the value that consumers get from social media and the challenges of establishing trust, responsibility for content and the role of regulation. Consumers value social media, but they want more control over their data, and information that is more trustworthy.

Key quote
“It’s clear that consumers like the convenience of social media as a delivery platform for everything from entertainment to news, however they also want to trust that social media companies are committed to distributing truthful, reliable information while protecting their own personal data. By building trusted and equitable relationships with consumers that address the need for more transparency, agency, privacy and security, social media services can continue to build on their success as dependence on their platforms continues to grow.”

Advertising: Building block for some, barrier for others
As more consumers use advertising supported digital entertainment services, ad-related preferences and expectations around personalization and privacy vary across consumer segments and media. Some people welcome ads as a way to get more content while managing costs, building their own set of go-to services; others will do whatever they can to avoid advertising.

About Deloitte
Deloitte provides industry-leading audit, consulting, tax and advisory services to many of the world’s most admired brands, including nearly 90% of the Fortune 500® and more than 7,000 private companies. Our people come together for the greater good and work across the industry sectors that drive and shape today’s marketplace — delivering measurable and lasting results that help reinforce public trust in our capital markets, inspire clients to see challenges as opportunities to transform and thrive, and help lead the way toward a stronger economy and a healthier society. Deloitte is proud to be part of the largest global professional services network serving our clients in the markets that are most important to them. Building on more than 175 years of service, our network of member firms spans more than 150 countries and territories. Learn how Deloitte’s more than 330,000 people worldwide connect for impact at www.deloitte.com .

Deloitte refers to one or more of Deloitte Touche Tohmatsu Limited, a UK private company limited by guarantee (“DTTL”), its network of member firms, and their related entities. DTTL and each of its member firms are legally separate and independent entities. DTTL (also referred to as “Deloitte Global”) does not provide services to clients. In the United States , Deloitte refers to one or more of the US member firms of DTTL, their related entities that operate using the “Deloitte” name in the United States and their respective affiliates. Certain services may not be available to attest clients under the rules and regulations of public accounting. Please see www.deloitte.com/about to learn more about our global network of member firms. 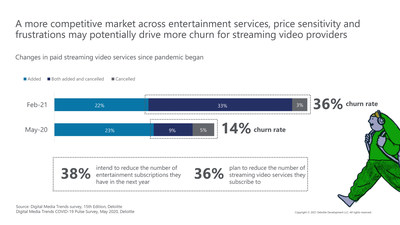