FIGURE 1 - Example of core from CVZ-71, the first hole drilled using PQ core. PQ-sized core has a larger diameter to provide more material for ongoing metallurgical testing. This particular section shows the transition from olive claystones to the blue reduced claystones. As a general rule, demonstrated by previous programs, the blue claystones tend to have higher lithium values. 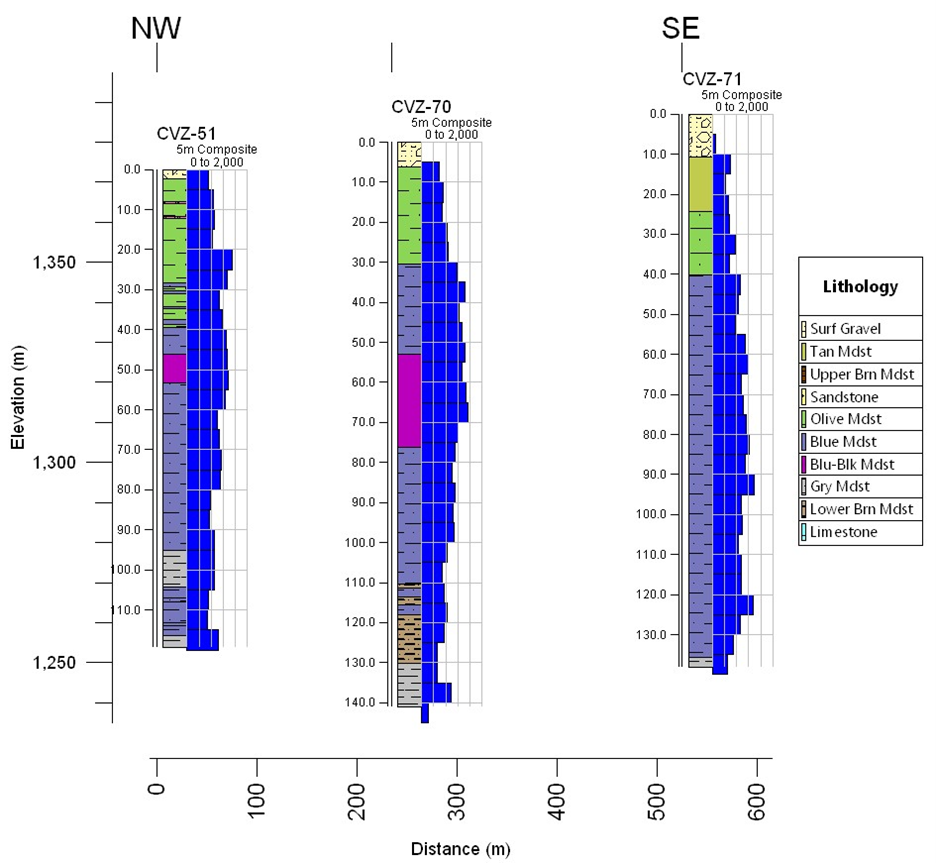 Figure 2. Comparative stratigraphy and assay results for drill hole CVZ-71 as compared to previously drilled holes CVZ-51 and CVZ-70. CVZ-51 and CVZ-70 both had long intercepts of high-grade lithium mineralization. The histogram on the sides of the holes are the composited lithium grades in ppm Li. The cross section has a 4X vertical exaggeration.

"As Noram moves toward completion of the Zeus property's PFS, now on schedule for completion in October 2022, the assay results from CVZ-71 provide another long, high-grade intercept to the list of drillholes that is expected to upgrade a major portion of the deposit from an inferred resource to the indicated resource category" comments Brad Peek, VP of Exploration and geologist on all six phases of Noram's Clayton Valley exploration drilling.

The samples were analyzed by the ALS laboratory in Reno, Nevada. Certified reference standard samples were included in the sample batch and returned values that were within their expected ranges.

The technical information contained in this news release has been reviewed and approved by Brad Peek., M.Sc., CPG, who is a Qualified Person with respect to Noram's Clayton Valley Lithium Project as defined under National Instrument 43-101.

Noram Lithium Corp. (TSXV:NRM),(OTCQB: NRVTF),(Frankfurt:N7R) is a well-financed Canadian based advanced Lithium development stage company with less than 90 million shares issued and a fully funded treasury. Noram is aggressively advancing its Zeus Lithium Project in Nevada from the development-stage level through the completion of a Pre-Feasibility Study in 2022.

The Company's flagship asset is the Zeus Lithium Project ("Zeus"), located in Clayton Valley, Nevada. The Zeus Project contains a current 43-101 measured and indicated resource estimate* of 363 million tonnes grading 923 ppm lithium, and an inferred resource of 827 million tonnes grading 884 ppm lithium utilizing a 400 ppm Li cut-off. In December 2021, a robust PEA** indicated an After-Tax NPV(8) of US$1.3 Billion and IRR of 31% using US$9,500/tonne Lithium Carbonate Equivalent (LCE). Using the LCE long term forecast of US$14,000/tonne, the PEA indicates an NPV (8%) of approximately US$2.6 Billion and an IRR of 52% at US$14,000/tonne LCE. 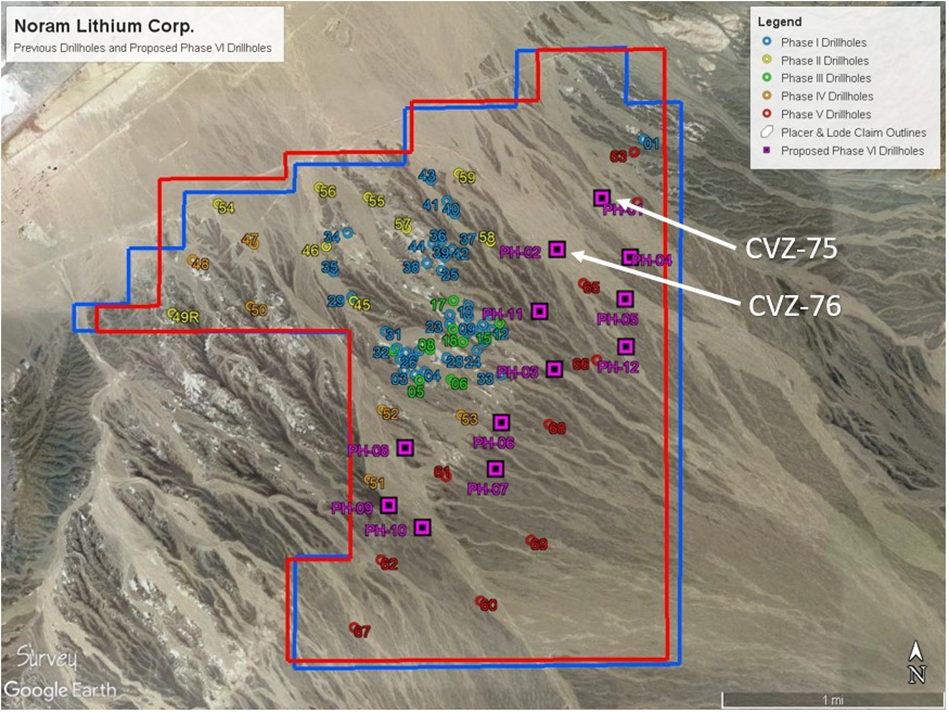 Figure 1 - Location of all past drill holes (Phase I to Phase V) previously completed in addition to the 12 proposed holes for Phase V1. Phase VI holes are indicated in purple.

Sandy MacDougall, CEO of Noram Lithium Corp. ("Noram" or the "Company") (TSXV:NRM)(OTCQB:NRVTF)(Frankfurt:N7R) is pleased to announce" that the Company has successfully completed the Phase VI infill drill program on the Zeus Lithium Project in Clayton Valley, Nevada. The Zeus Project contains a current NI 43-101 measured and indicated resource estimate* of 363 million tonnes grading 923 ppm lithium, and an inferred resource of 827 million tonnes grading 884 ppm lithium utilizing a 400 ppm Li cut-off. In December 2021, a robust PEA** indicated an After-Tax NPV(8) of US$1.3 Billion and IRR of 31% using US$9,500tonne Lithium Carbonate Equivalent (LCE). Using the LCE long term forecast of US$14,000tonne, the PEA indicates an NPV (8%) of approximately US$2.6 Billion and an IRR of 52% at US$14,000tonne LCE

All 12 of the Phase VI proposed holes were completed to, or beyond, their anticipated depths for a total of 5246 ft (1599 m) of drilling. Most of the holes were drilled with HQ-size core with a diameter of 2.5 inches (63.5 mm). However, 4 of the holes were drilled with PQ-size (3.35 inches, 85 mm diameter) to be used for the ongoing metallurgical test work. The samples from the core have been hand-delivered to ALS Laboratory in Reno, Nevada for processing. QA/QC samples have been inserted into the sample stream to confirm sample results.

Sandy MacDougall, CEO of Noram Lithium Corp. ("Noram" or the "Company") (TSXV:NRM | OTCQB:NRVTF | Frankfurt:N7R) is pleased to announce the successful completion of CVZ-72 (PH-06) and release of the final assay results. The Company completed core hole CVZ-72 at a depth of 428 feet (130.5 m). Sampling for assay began at 60 ft (18.3 m) and continued to the bottom of the hole, an interval thickness of 368 ft (112.2 m) was intersected, which was the entire assayed portion of the hole. The hole ended in mineralization and the weighted average lithium values present were as follows 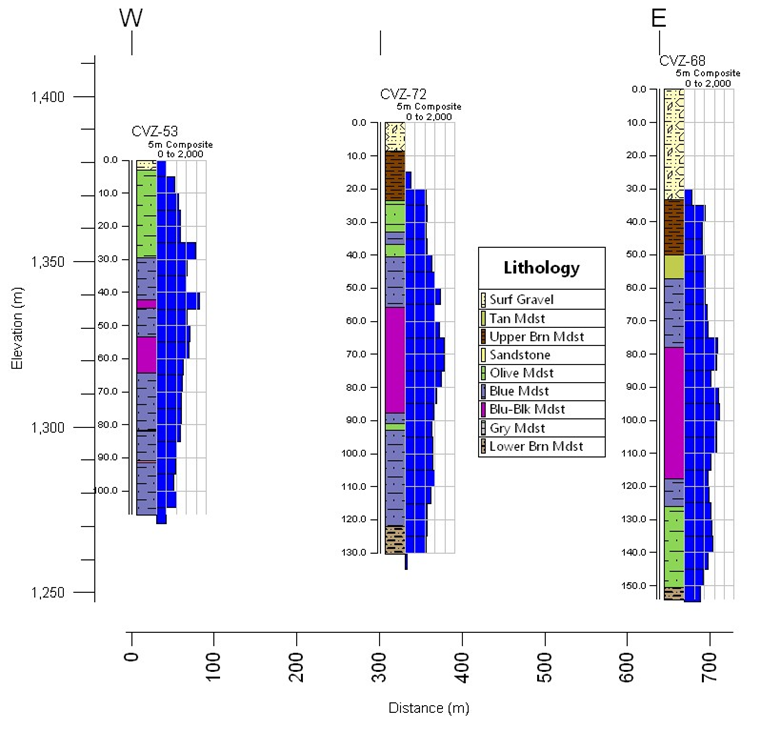 Figure 1. Comparative stratigraphy and assay results for drill holes CVZ-72 as compared to CVZ-53 and CVZ-68, which were drilled as part of the Phases IV and V programs. CVZ-53 and CVZ-68 both had long intercepts of high grade lithium mineralization. The histogram on the sides of the holes are the composited lithium grades in ppm Li. The cross section has a 4X vertical exaggeration.

Sandy MacDougall, CEO of Noram Lithium Corp. ("Noram" or the "Company") (TSXV:NRM)(OTCQB:NRVTF)(Frankfurt:N7R) is pleased to report that the Company has completed hole CVZ-74 (PH-07) on its Zeus lithium clay deposit in Nevada to a total depth of 558.0ft (170.1 m). Visual inspection of the core confirmed that clays previously shown to be high in lithium grades appeared at approximately 126.0 ft (38.4 m) and extended down to total depth of 478.0 ft (145.7 m) for a total intersection of approximately 352.0 ft (107.3 m). Variously colored mudstones, which may also contain high lithium levels were logged down to the hole's total depth of 558.0 ft (170.1 m 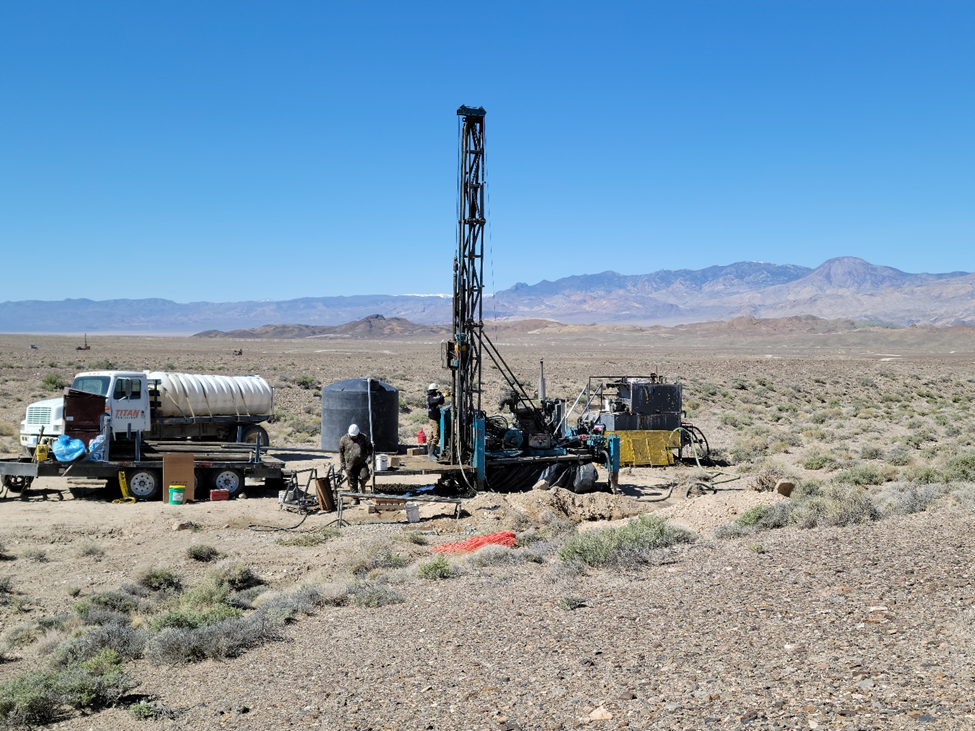 Alpha Lithium Corporation (TSX.V: ALLI) (OTC: APHLF) (Germany WKN: A3CUW1) (" Alpha " or the " Company ") is very pleased to provide an operational update on its Salar del Hombre Muerto and Tolillar Salar projects in Argentina's Lithium Triangle. Alpha is commencing a Vertical Electrical Sounding ("VES") survey on its 100% owned, 5,000-hectare property in Hombre Muerto with the intention to complement and direct the Company's upcoming drilling program. At Tolillar, the Company is pleased to provide an update on VES, drilling and the scheduled completion of an inaugural NI 43-101 Resource Report.

The Company currently has $44 million in cash; and accordingly, is extremely well-funded to continue its drilling and exploration activities.

ACME Lithium Inc. (CSE: ACME) (OTCQB: ACLHF) (the "Company", or "ACME") is pleased to announce that President and CEO Steve Hanson and members of ACME's technical team will be meeting and presenting a detailed overview of ACME's US and Canadian lithium projects to industry and investment representatives at Fastmarkets Lithium Supply and Battery Raw Materials 2022 Monday June 27th to Wednesday June 29th in Phoenix, Arizona.

The Fastmarkets Lithium and Battery Raw Materials Conference, a three-day event, is the largest global forum for lithium and battery raw materials, with keynote speakers and attendees from the world's top producers, to end users as well as participants along the entire supply chain. Fastmarkets is the most trusted cross-commodity price reporting agency (PRA) in the agriculture, forest products, metals and mining, and energy transition markets.

In addition, the remainder of all pending assays from the 2021-2022 winter drill program have been received; this will allow completion of a technical report at the Graal property.

Foremost Lithium Resource & Technology Ltd. (CSE: FAT) (OTCQB: FRRSF) (FSE: F0R0) (WKN: A3DCC8) ("Foremost" or the "Company") (www.foremostlithium.com), is pleased to announce a non-brokered private placement for the sale of an aggregate of 1,992,814 flow through common shares of the Company (the "FT Shares") at a price of $0.34 per FT Share for gross proceeds of approximately C$677,556.76, (the "Offering"). The Company has received signed subscription agreements for the above targeted amount.

An amount equal to the gross proceeds from the Offering will be used for exploration expenses on the Company's mineral properties in Manitoba, which will qualify as "Canadian Exploration Expenses", will be either expenses that qualify for the "critical mineral exploration tax credit" or "flow-through mining expenditures", as those terms are defined in the Income Tax Act (Canada), and will be "flow-through mining expenditures", as defined in the Income Tax Act (Manitoba). These expenseswill be renounced to the initial purchasers of the FT Shares with an effective date no later than December 31, 2022.

The Prospectors & Developers Association of Canada (PDAC) is the leading voice of the mineral exploration and development community, an industry that supports 719,000 people in direct and indirect employment, and contributes $106 billion to Canada's GDP every year. Representing over 6,000 members around the world, PDAC's work centers on supporting a competitive, responsible, and sustainable mineral sector. www.pdac.ca

Fortune Minerals Limited (TSE:FT) (FRA:FMP) (OTCMKTS:FTMDF) is a North American development stage mining company and past producer. Fortune is currently focused on advancing the vertically integrated NICO cobalt-gold-bismuth-copper project, comprised of a proposed mine and mill in the Northwest Territories that will produce a bulk concentrate for shipment to a refinery that the Company plans to construct in southern Canada.

RETRANSMISSION: Mink Ventures Signs Letter of Intent to Aquire an 80% Interest in the Montcalm Ni-Cu-Co Project for Possible Qualifying Transaction

Zinc Exploration in the Mining-friendly Jurisdiction of Spain

TomaGold reports the outcome of its annual meeting