Noram Lithium Corp. ("Noram" or the "Company") (TSXV:NRM | OTCQB:NRVTF | Frankfurt:N7R) is pleased to report that the Company has completed hole CVZ-70 on its Zeus lithium clay deposit in Nevada to a total depth of 463 ft (141.1m). When logging and visual inspection of the core was completed, it was noted that mineralization appeared immediately near surface and extended down to approximately 387.0 ft (138m) for a total intersection of 380ft (116m).

Figure 1 shows the Zeus project drilling to date with the various drilling phases color coded. The arrow points to the recently completed CVZ-70 hole. Other planned Phase VI holes are indicated in purple. 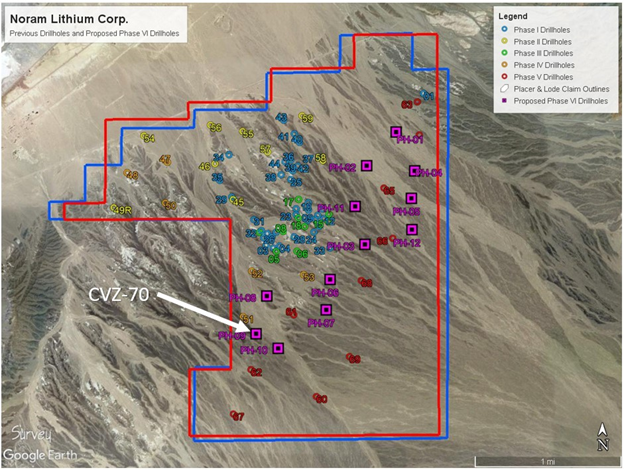 Figure 1 - Location of all past drill holes (Phase I to Phase V) previously completed in addition to the 12 proposed holes for Phase V1 currently underway. CVZ-70 and other planned Phase VI holes are indicated in purple.

"Drill hole CVZ-70 is an incredibly encouraging hole for Noram. Figure 2 below shows a cross section with CVZ-70 and two adjacent, previously drilled, holes. The blue, green, black and magenta layers in the figure indicate claystone layers that have been shown to host the higher lithium assays from past drilling. The 380-foot (116-meter) intersection in CVZ-62 was one of the thickest claystone intersections by far. CVZ-70 appears to likely rival this and prior holes from prior programs. Thicker intersections such as this one will have profound implications on future resource tonnage calculations" commented Brad Peek M.Sc. CPG., VP of Exploration and Qualified Person for this and all 5 of the previous drilling phases of Noram's Zeus lithium property. 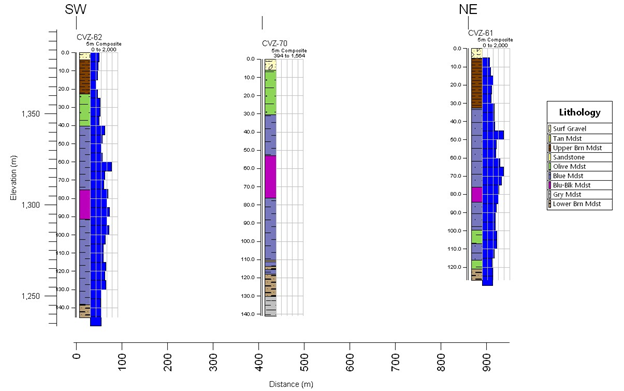 CVZ-70 is the first of the 12-hole Phase VI drilling program which is expected to upgrade approximately 175 million tonnes of the current 827 million tonne Inferred Resource to the Indicated category. Core samples from CVZ-70 have been shipped to ALS Laboratory in Reno, Nevada for assay processing on a "rush" basis. Assay results are pending.

The technical information contained in this news release has been reviewed and approved by Brad Peek., M.Sc., CPG, who is a Qualified Person with respect to Noram's Clayton Valley Lithium Project as defined under National Instrument 43-101.

Noram Lithium Corp. (TSXV: NRM | OTCQB: NRVTF | Frankfurt: N7R) is a well-financed Canadian based advanced Lithium development stage company with less than 90 million shares issued and treasury exceeding US$18 million. Noram is aggressively advancing its Zeus Lithium Project in Nevada from the development-stage level through the completion of a Pre-Feasibility Study in 2022.

The Company's flagship asset is the Zeus Lithium Project ("Zeus"), located in Clayton Valley, Nevada. The Zeus Project contains a current 43-101 measured and indicated resource estimate* of 363 million tonnes grading 923 ppm lithium, and an inferred resource of 827 million tonnes grading 884 ppm lithium utilizing a 400 ppm Li cut-off. In December 2021, a robust PEA** indicated an After-Tax NPV(8) of US$1.3 Billion and IRR of 31% using US$9,500/tonne Lithium Carbonate Equivalent (LCE). Using the LCE long term forecast of US$14,000/tonne, the PEA indicates an NPV (8%) of approximately US$2.6 Billion and an IRR of 52% at US$14,250/tonne LCE.

noram lithium corp. ("noram" or the "Company") (TSXV:NRM)(OTCQB:NRVTF)(Frankfurt:N7R) announces it has further strengthened its technical team with the appointment of Marcus Tomlinson as a Metallurgical Consultant. The Company has also formally contracted Dr. Vahid Sohrabi as a Hydrogeological Consultant

"Advancing the Zeus Lithium Project requires a dedicated focus on the metallurgy, flowsheet and development of a sustainable water supply," stated Greg McCunn, Chief Executive Officer of noram. "Marcus has a strong hydrometallurgical background and extensive experience in process design and will be key to leading the ongoing metallurgical work and development of a final process design. Vahid will be instrumental to helping us determine the right option for a consistent, efficient supply of water to the project. I look forward to working with Marcus and Vahid to continue to advance and de-risk the project."

"On behalf of the Board of Directors, I would like to thank Peter for his hard work and dedication over the past year and wish him well in his future endeavours," stated Mr. Sandy MacDougall, Founder and Executive Chairman of noram. "With Mr. McCunn now in place as our new Chief Executive Officer, we are looking forward to an exciting year for noram".

Noram Lithium Corp. ("Noram" or the "Company") (TSXV:NRM )(OTCQB:NRVTF)(Frankfurt:N7R) announces that, effective immediately, the Board of Directors has appointed Greg McCunn as Chief Executive Officer to lead the Company through the next stages of development at its wholly-owned high grade Zeus Lithium Project in Clayton Valley, Nevada. Noram's Founder and current Chief Executive Officer, Sandy MacDougall, will continue with the Company as Chair of the Board of Directors

"The previous 12 months have been incredibly productive for the Company" stated Mr. MacDougall. "On the back of a positive Preliminary Economic Assessment on the Zeus Project, we started 2022 with a strategic financing that has put the Company in a strong financial position with approximately CAD$14 million in the treasury at calendar year end and no debt. During the year we completed a successful infill drilling program consisting of 12 drill holes which all intersected high-grade lithium over significant lengths, and from which we anticipate a significant conversion of Inferred Resources to Measured and Indicated".

Noram Lithium Corp. ("Noram" or the "Company") (TSXV:NRM)(OTCQB:NRVTF)(Frankfurt:N7R) is pleased to review the Company's activities during 2022 and to highlight upcoming catalysts at its 100%-owned high-grade Zeus Lithium Project in Clayton Valley, Nevada

S andy MacDougall, CEO of Noram Lithium Corp. (" Noram " or the " Company ") (TSXV:NRM | OTCQB:NRVTF | Frankfurt:N7R) is pleased to announce the successful completion of CVZ-81 (PH-03) and release of the final assay results. The Company completed core hole CVZ-81 at a depth of 451.5 feet (137.6 m). Sampling for assay began at 55 ft (16.8 m) and continued to the bottom of the hole, an interval thickness of 416.5 ft (126.9 m) was intersected. The hole ended in mineralization and the weighted average lithium values present were as follows

CVZ-81 was the last hole drilled in Noram's Phase VI drilling program and had better than expected results, as did most of the holes in this in-fill drilling program. Now that the final assays are in, efforts are being focused on updating the geological/lithium grade models to be used in the upcoming PFS. The grades and thicknesses of mineralization seen in the Phase VI holes are anticipated to substantially improve the outlook for the Zeus deposit and upgrade approximately 175 million tonnes of the deposit from the inferred resource category to indicated resource." comments Brad Peek, VP of Exploration and geologist on all six phases of Noram's Clayton Valley exploration drilling.

Ioneer Ltd (“Ioneer” or “the Company”) (ASX: INR, Nasdaq: IONR), an emerging lithium-boron supplier, is pleased to report on its activities for the quarter ending 31 December 2022 and to provide an update on the development of its 100%-owned Rhyolite Ridge Lithium-Boron Project in Esmeralda County, Nevada (“Rhyolite Ridge Project” or “the Project”).

Venus Metals Corporation Limited (“Venus” or the “Company”) activities conducted during the quarter ending 31 December 2022 include and highlight the following:

In the past few years, Australia has been positioning itself to take advantage of the green energy transition taking place globally, with plenty of projects focused on battery metals on the horizon.

Demand for raw materials essential to electric vehicle batteries is expected to increase in coming years, with many ASX mining companies in the lithium, cobalt and graphite sectors already seeing gains.

Here, the Investing News Network looks at what happened in 2022 and what could be ahead for Australia’s battery metals market in the new year.

Pegmatite Body At Adina Extended To 1,600m Of Potential Strike By Step-Out Drilling

Winsome Resource (ASX:WR1; “Winsome” or “the Company”) is pleased to provide an update on its ongoing diamond drilling program at its 100 per cent-owned Adina project in Quebec, Canada.

Lithium Power International Limited (ASX: LPI) (“LPI” or the “Company”) is pleased to announce that the Company has successfully completed its reverse circulation (“RC”) drilling stage at its East Kirup lithium prospect on E70/4763. Ten holes for a total of 573 metres of drilling were completed along existing tracks. A total of 960m was planned, however a few holes had to be cancelled due to environmental considerations. The majority of the holes were completed to 54m. All holes have been rehabilitated.