TDG Gold Corp (TSXV:TDG) (the "Company" or "TDG") is pleased to announce that it entered into a non-binding letter of intent (the "LOI") on June 18, 2021 with ASX-listed Kingsgate Consolidated Limited ("Kingsgate"), an arm's length party to TDG, to acquire Kingsgate's "Nueva Esperanza" silver-gold advanced exploration and development project, located in the Maricunga Belt of the Atacama Region of Northern Chile (Figure 1). The proposed transaction will be transformative for TDG, creating a leading pure precious metals focused company with the ambition to accelerate both Nueva Esperanza in the Maricunga and TDG's Shasta project in BC's Toodoggone Production Corridor to production decisions by the end of 2024

The Nueva Esperanza project is located in the northern half of the Maricunga Belt, 140 kilometres ("km") northeast of the city of Copiapo, which is a regional mining centre. It is situated at 4000-4200 metres ("m") elevation and has three mining areas Arqueros, Chimberos and Teteritawith permits for development and associated water rights.

TDG, as part of its due diligence, commissioned Sue Bird, P.Eng of MMTS (Moose Mountain Technical Services) to undertake an independent mineral resource estimate for the Nueva Esperanza project in accordance with NI 43-101. The work required to verify the historical mineral resource estimate as current includes a project site visit, and QA/QC data review together with modelling the in-pit silver and gold assay data.

TDG has completed extensive legal and technical due diligence review on the Nueva Esperanza project and concluded that the project offers an opportunity for significant value creation for TDG's owners and its other stakeholders, whilst transforming TDG into a silver-focused advanced exploration and development company.

TDG thanks Kingsgate for its work between 2009 to present and looks forward to working with the Kingsgate team located in Chile, and to welcoming Kingsgate as strategic owners of TDG (see summary of key transaction terms below).

The new 2021 mineral resource estimate, in combination with the foundational work by Kingsgate, would provide the basis for TDG to prepare a new Preliminary Economic Assessment study in accordance with NI 43-101 guidelines.

Under the terms of the LOI, in exchange for 100% ownership of the Nueva Esperanza project, TDG will pay to Kingsgate the following consideration:

TDG has agreed to raise a minimum of $35,000,000 in an equity financing concurrent with the closing - further announcements will follow in due course regarding the financing arrangements. Kingsgate will also receive certain rights pursuant to an investor rights agreement providing, amongst other things, a Kingsgate nominee on TDG's Board of Directors and rights to maintain its TDG share ownership percentage under certain conditions.

The LOI is non-binding, and investors are cautioned that there is no guarantee that the Company will enter into a binding agreement in respect of, or ultimately complete, the proposed acquisition. Completion of the proposed acquisition would be subject to a number of conditions precedent, including completion of satisfactory due diligence, the negotiation and settlement of a binding definitive agreement, and receipt of regulatory approval, including the approval of the Exchange. The LOI will be terminable by either party if the parties have not entered into a binding definitive agreement by July 16, 2021, or such other date as determined by the parties. TDG anticipates that the proposed acquisition should close in mid-August of 2021, however the LOI contemplates an outside date for completion of August 31, 2021, which date may be extended by the agreement of the parties.

Over 100 Moz of gold with associated silver and copper have been discovered in the Maricunga Belt in northern Chile to date, with deposits dominantly hosted in a late Oligocene to Miocene age metallogenic belt. The sedimentary and volcanic rocks are host to a number of existing and advanced exploration and development stage projects as well as producing mines (Figure 1) including: Gold Fields' Salares Norte project, currently in construction, which is located in the northern Maricunga belt, and Kinross Gold's final stage La Coipa mine development, which is located approximately 30 km southwest from Nueva Esperanza. 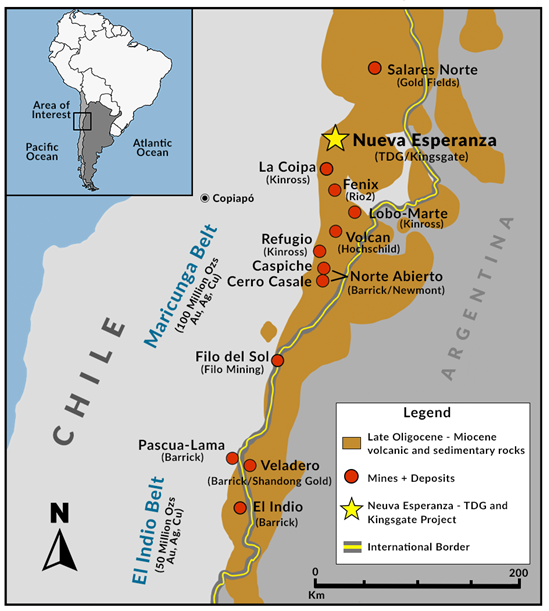 Figure 1 showing the location of Nueva Esperanza and other key projects in the Maricunga Belt of the Atacama Region of Chile.

Nueva Esperanza is a silver and gold project covering approximately 14,000 hectares of exploitation and exploration concessions. It comprises three well-defined silver-gold deposits hosted in a high sulphidation epithermal system along with a number of undeveloped exploration targets, including additional epithermal targets and gold mineralization hosted in porphyritic rocks. The principal silver-gold deposits within the project are Arqueros, Chimberos and Teterita (Figure 2). Since the initial discovery by Anglo American Chile in 1981, the project has been subject to over 279,000 m of historical drilling in > 3,900 drill holes. The Chimberos deposit was open pit mined in 1998-1999, producing 32 Moz Ag. The Arqueros deposit was underground mined between 2000-2004 producing 14 Moz Ag and 0.05 Moz Au.

In July 2020, the project was granted Environmental Impact Assessment approval allowing the pre-development, construction and operation of Arqueros, Chimberos and Teterita. The project also has existing water rights with Anglo American Chile through to November 14, 2029, which can be renewed on further agreement with the owner. 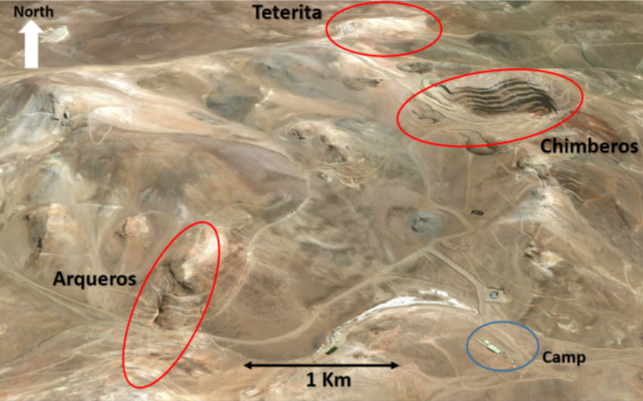 Figure 2 showing the proximity of the Arqueros, Chimberos and Teterita deposits and the location of the camp.

The Historical Estimate was estimated using Ordinary Kriging (OK) using a 0.5g/t gold equivalent cut-off grade, with the gold equivalent being calculated on an AuEQ60 basis (Gold Equivalent: AuEq (g/t) = Au (g/t) + (Ag (g/t) ÷ 60)). The cut-off grade was calculated assuming long-term historical prices of US$1,200/oz for gold and US$19.00 for silver and combined life of mine average metallurgical recoveries of 80% Au and 84% Ag, estimated from test work by Kingsgate.

The Historical Estimate is based on reverse circulation (RC), diamond (DDH) and open hole percussion (DTH) drilling from surface and underground mine workings completed by several companies since 1980. The sampling includes 2009-2015 drilling by Laguna Resources, a wholly owned division of Kingsgate Consolidated Ltd (25% of the drill meters) and previous explorers including Anglo American Chile (18%), Can Can Mining (44%) and Kinross (14%). The combined resource database totals 3,390 holes for 183,852 m.

Waste piles estimated at 4.6 Mt are located at Chimberos and were included in the Historical Estimate published by Kingsgate, but have not been included in the estimates summarised in this news release, as TDG believes additional sampling data is required.

A full description of the sample techniques and data was provided in the report published by Kingsgate.

The technical content of this news release has been reviewed and approved by Andrew French, P.Geo., a qualified person as defined by NI 43-101 and a director of the Company.

TDG is a major holder of mineral claims and mining leases in the historical Toodoggone Production Corridor of north-central British Columbia, Canada, with over 23,000 hectares of brownfield and greenfield exploration opportunities under direct ownership or earn-in agreement. TDG's flagship projects are the former producing, high-grade gold-silver Shasta, Baker and Mets mines which are all road accessible, produced intermittently between 1981-2012, and have over 65,000 metres of historical drilling. In 2021, TDG proposes to advance the projects through compilation of historical data, new geological mapping, geochemical and geophysical surveys, and drill testing of the known mineralization occurrences and their extensions. TDG currently has 64,423,459 common shares issued and outstanding.

1JORC (Joint Ore Reserves Committee) standards are not in accordance with National Instrument 43-101 - Standards of Disclosure for Mineral Projects ("NI 43-101") and all figures quoted in this news release from the 2016 mineral resource estimate should therefore be treated as historical.

Although gold's performance in 2022 has disappointed some investors, the yellow metal's price is still high by historical standards and it remains a safe haven in tumultuous times.

Speaking to the Investing News Network at the Rule Symposium, Alastair Still, CEO of GoldMining (TSX:GOLD,NYSEAMERICAN:GLDG), pointed out that general market activity has weighed on gold.

"There's been a little bit of fear out there — there's concerns about inflation, talk of recession … people are trying to navigate the waters. It can get a little complicated," he said during the interview at the event, held at the end of July.

Visible Gold in First Holes Drilled into No9 Vein at Elizabeth

Tempus Resources Ltd ("Tempus" or "the Company") (ASX:TMR)(TSX.V:TMRR)(OTCQB:TMRFF) is pleased to announce that it has intersected wide zones of mineralisation containing visible gold in two drill holes targeting the No. 9 Vein (EZ-22-19 and EZ-22-20) at the Elizabeth Gold Project in Southern British Columbia, Canada

Sarama Resources Ltd. (“Sarama” or the “Company”) (ASX:SRR, TSX- V:SWA) is pleased to present the Management’s Discussion and Analysis of Financial Results for the three months (second quarter) and six months ended June 30, 2022

Gold Springs Resource Corp. (TSX:GRC)(OTCQB:GRCAF) (the "Company" or "GRC"), has received assays from the final drill holes at South Jumbo as part of the 2022 drill campaign on its large Gold Springs project located in USA, on the border of Nevada and Utah, one of the best mining jurisdictions in the world.

All amounts expressed in US dollars.

Barrick Gold Corporation (NYSE:GOLD)(TSX:ABX) is contributing $150,000 to Balochistan's Provincial Disaster Management Authority (PDMA) to support its relief efforts in the wake of unprecedented floods in the region. Remote communities in the province were hardest hit by the heavy monsoon rains which killed more than 500 people in Pakistan.

Tartisan Nickel Corp. Announces Intention to Commence Normal Course Issuer Bid to Repurchase up to 5% of Its Common Shares

What is a Preliminary Economic Assessment?