“The first drill hole was completed (MB21001) on Saturday, September 18, 2021, which was terminated at 149m. The drill hole was collared at an angle of -70 degrees and drilled in the same approximate vicinity as historic hole MBO-15, which returned 15.39 g/t Au over 10.03m. MB21001 intercepted mineralization in a sulphide rich shear zone from 84.3m to 95.0m. Sulphides consist of 1 to 10% semi-massive and massive pyrite and pyrrhotite with moderate to strong sericite alteration. A further zone of sulphide mineralization, but without the intense sericite alteration was present from 99.5m to 115m consisting of 1 – 5% disseminated pyrite and pyrrhotite. Additional logging and details are pending. The beginning of this drill program is an exciting new exploration area for SKRR. This exploration program is in addition to the large Olson Gold project that yielded a discovery in previous drilling. SKRR plans to continue the year with the return to the Olson property in addition to the current Manson Bay drilling.”

SKRR is pleased to release initial core pictures that have not been assayed and results will be released as available. 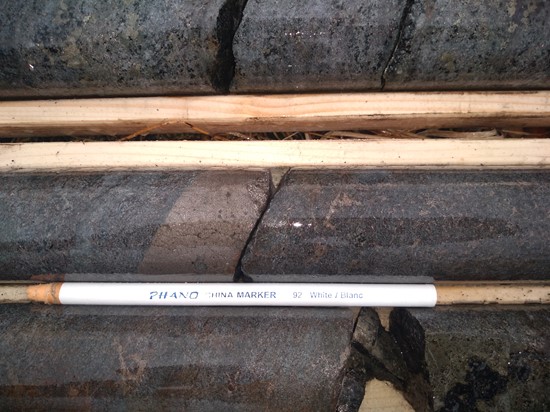 To view an enhanced version of this image, please visit:
https://orders.newsfilecorp.com/files/6952/97123_skrrfigure1.jpg 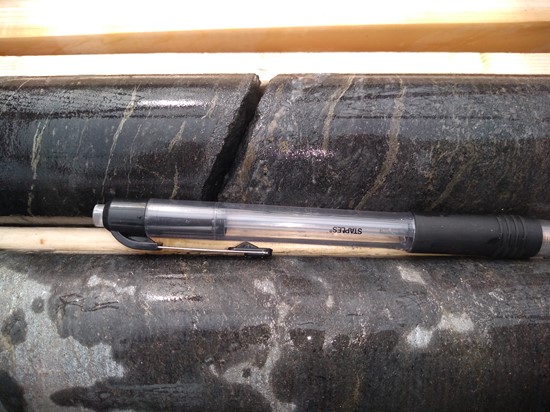 To view an enhanced version of this image, please visit:
https://orders.newsfilecorp.com/files/6952/97123_skrrfigure2.jpg

The 2021 Manson Bay drilling targets are based on a comprehensive compilation and modelling of all available data including historic drilling, and from the recent fieldwork completed by SKRR.

The mineral occurrence located on the Manson Bay Project referred to as the Manson Bay Gold Zone is documented in the Saskatchewan Mineral Deposit Index (“SMDI“) as occurrence #2280. The historic results were summarized from the SMDI descriptions and assessment reports filed with the Saskatchewan government. SKRR cautions that historical results were collected and reported by past operators and have not been verified nor confirmed by a Qualified Person but form a basis for ongoing work at the Manson Bay Project. Further work (including drilling) is required by SKRR in order to verify the historical work on the Manson Bay Project. Widths reported in this news release are down hole, and do not necessarily represent true width.

The scientific and technical information contained in this news release has been reviewed and approved by Ross McElroy P.Geol, a director of the Company and a “Qualified Person” as defined in National Instrument 43-101 – Standards of Disclosure for Mineral Projects. Mr. McElroy verified the data disclosed (unless indicated otherwise) which includes a review of the sampling, analytical and test data underlying the information and opinions contained therein.

This news release contains “forward‐looking information or statements” within the meaning of applicable securities laws, which may include, without limitation, statements that address the planned drilling on the Manson Bay Project and the expected outcomes, additional work on the Olson Project, other statements relating to the technical, financial and business prospects of the Company, its projects and other matters. All statements in this news release, other than statements of historical facts, that address events or developments that the Company expects to occur, are forward-looking statements. Although the Company believes the expectations expressed in such forward-looking statements are based on reasonable assumptions, such statements are not guarantees of future performance and actual results may differ materially from those in the forward-looking statements. Such statements and information are based on numerous assumptions regarding present and future business strategies and the environment in which the Company will operate in the future, including the price of metals, the ability to achieve its goals, the ability to secure equipment and personnel to carry out work programs, that general business and economic conditions will not change in a material adverse manner, that financing will be available if and when needed and on reasonable terms. Such forward-looking information reflects the Company’s views with respect to future events and is subject to risks, uncertainties and assumptions, including those filed under the Company’s profile on SEDAR at www.sedar.com. There is a possibility that future exploration, development or mining results will not be consistent with the Company’s expectations. Factors that could cause actual results to differ materially from those in forward looking statements include, but are not limited to, continued availability of capital and financing and general economic, market or business conditions, decrease in the price of gold and other metals, equipment failures or failure to obtain the necessary equipment, adverse weather and climate conditions, failure to maintain all necessary government permits, approvals and authorizations, the impact of Covid-19 or other viruses and diseases on the Company’s ability to operate, failure to maintain community acceptance (including First Nations), increase in costs, litigation, and failure of counterparties to perform their contractual obligations. The Company does not undertake to update forward‐looking statements or forward‐looking information, except as required by law.

To view the source version of this press release, please visit https://www.newsfilecorp.com/release/97123