Approximately 400-line kilometres will also be conducted at the Roma project. This survey, which covers an area where folded stratigraphy is juxtaposed against the Kennarctic shear zone and hosts historic +5 g/t Au samples in veining associated with the folding, is expected to be elevated to drill readiness for 2022.

The Ulu and Hood River survey will assist in refining the geological interpretation and the target definitions prior to the execution of the drilling program slated to commence in the coming days. Targets for the upcoming 2021 program are prioritized based on impact to existing resources and potential scale of new discoveries (closer to Flood Zone deposit is better):

The Company’s wholly owned Ulu and Hood River properties are located approximately 525 km NNE of Yellowknife, NT in the Kitikmeot region of western Nunavut. Kugluktuk is approximately 210 km to the NW. 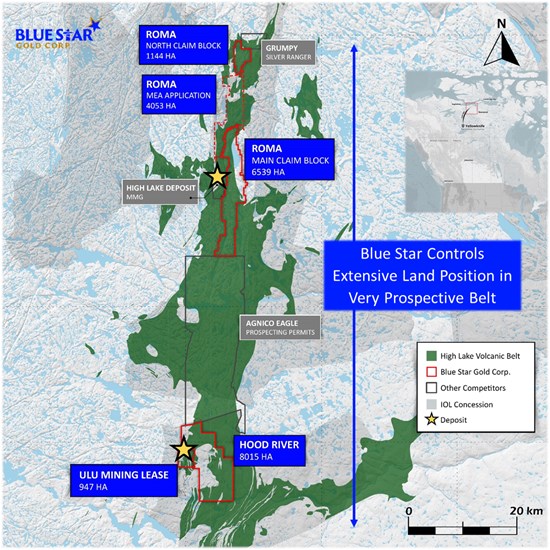 The Ulu lease hosts the advanced stage Flood Zone gold deposit, where a significant high-grade gold resource has been outlined by previous workers. Several additional gold zones (including but not limited to Zebra, Contact, Central, Axis, and Gnu prospects) are spatially related to the axis of the 5 km long Ulu Fold which extends from the Ulu lease onto the northern part of the Hood River property and culminates at the North Fold Nose Zone. The eastern side of the Hood River property is contiguous to the Ulu lease and hosts over twenty known gold showings. The promise of the Hood River prospects are anchored in the similar stratigraphic sequence and same deformation history (including tight folding) as the Flood Zone. One of the most prospective target areas on the eastern Hood River property is the 4 km long Crown-Pro trend which has seen only limited, shallow drilling. 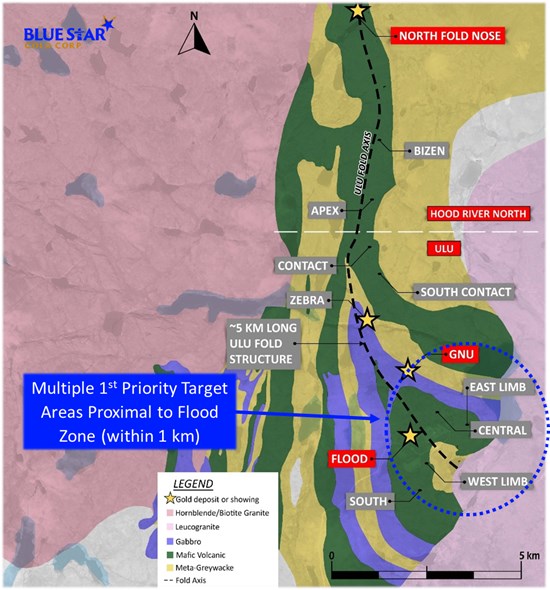 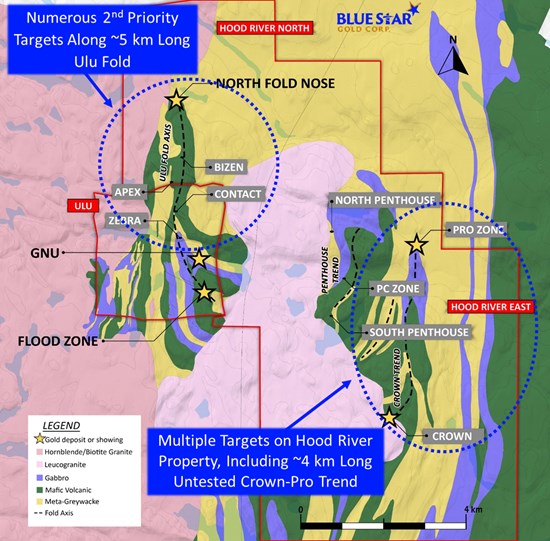 The geologic setting and style of gold mineralization at the Roma project is similar to that found at the Ulu and Hood River projects. Based on historical data compilation, multiple significant gold showings are present on the property within a 6.5 km by 2.4 km area, including several drill ready targets. No follow up drilling is known to have been completed on this property after BHP’s initial drill program in the 1990’s which returned a best interval of 12.38 g/t Au over 2.31 m from a limited program (Roma Main). Approximately 4 km southwest of Roma Main is the Roma Fold which is defined by numerous high-grade gold showings within a 1.6 km x 0.55 km area on the east limb of an anticlinal fold structure adjacent to the Kennarctic Shear Zone; all these target areas in the anticline remain undrilled.

Darren Lindsay, P. Geo. and Vice President Exploration for Blue Star, is a Qualified Person under National Instrument 43-101 (“NI 43-101”) and has reviewed and approved the technical information contained in this news release.

Based in Langley, B.C., Precision has the expertise and personnel to plan and execute a successful geo-exploration program. Precision has flown over 500 surveys around the world since 2007 using innovative geophysical technologies.

Blue Star is a gold and silver company focused on exploration and development within Nunavut, Canada. The Company owns the Ulu Gold Property lease, an advanced gold and silver project, and the highly prospective Hood River Property that is contiguous to the Ulu mining lease. With the recent acquisition of the Roma Project, Blue Star now controls over 16,000 hectares of highly prospective and underexplored mineral properties in the High Lake Greenstone Belt, Nunavut. A significant high-grade gold resource exists at the Flood Zone deposit (Ulu lease), and numerous high-grade gold occurrences and priority targets occur throughout the Ulu, Hood River and Roma Projects.

Neither the TSX Venture Exchange nor its Regulation Services Provider (as that term is defined in the Policies of the TSX-Venture Exchange) accepts responsibility for the adequacy or accuracy of this Release.

To view the source version of this press release, please visit https://www.newsfilecorp.com/release/88392