ALX Resources Corp. (TSXV: AL) (FSE: 6LLN) (OTC: ALXEF) ("ALX" or the "Company") is pleased to announce that it has acquired by staking the Sabre Uranium Project ("Sabre", or the "Project") in northern Saskatchewan. Sabre consists of 16 mineral claims encompassing 16,041 hectares (38,659 acres), located along the northern margin of the Athabasca Basin near Richards Lake, SK, approximately 60 kilometres (40 miles) west of the community of Stony Rapids, SK.

Highlights of the Sabre Uranium Project 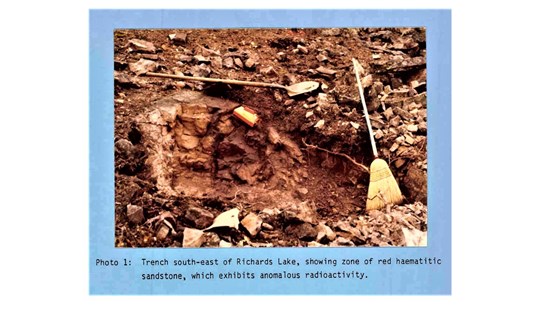 ALX is compiling and integrating geophysical and geochemical data from historical work to identify new target areas at Sabre. ALX believes that historical geophysical conductors at Sabre were not well-resolved with the exploration technology available up to the mid-2000s. A site visit to verify uranium-bearing boulders and outcrop is planned in 2021 to better understand the relationship between the surface expression of uranium-bearing boulders and outcrop and the significant fault structures present at the Project. Additional work may include airborne radiometric surveys, airborne electromagnetic surveys and Spatiotemporal Geochemical Hydrocarbon ("SGH") soil surveys across the highest-priority areas, to optimize potential drill targets.

To view maps and photos of Sabre click here

Sabre is located along the northern margin of the Athabasca Basin, a dominantly sandstone-infilled basin which unconformably overlies crystalline basement rocks of the Tantato Domain of the Canadian Shield in northern Saskatchewan. The Athabasca Basin area is a fertile uranium district that hosts the world's highest-grade uranium mines, with over 900 million pounds of U3O8 produced since mining began in at the Nicholson Mine in 1949.

The Project is situated within the Snowbird Tectonic Zone ("STZ"), a major regional geological structure, and includes several parallel northeast-trending fault zones, as well as cross-cutting structures. Numerous historical uranium showings are found within the STZ, such as the Nisto Mine, Black Lake, and the Fond du Lac Uranium Deposit. The Fond du Lac Uranium Deposit, located approximately 15 kilometres west of the centre of Sabre, was discovered in 1970 by Camok Ltd., a predecessor company of Orano Canada Ltd., after tracing radioactive boulders to their source area and grid drilling. A shallow historical resource was calculated in 1970 of 990,000 pounds of U3O8 (450,000 kilograms) at an average grade of 0.25% but was never advanced further (Source: Saskatchewan Mineral Deposits Index, Mineral Property #1572. This historical resource is not necessarily indicative of the mineralization present at Sabre, nor is compliant with the standards of National Instrument 43-101 and has not been verified by ALX's Qualified Person. It is included for information purposes only.) Uranium mineralization at the Fond du Lac deposit is described as a "high-grade" central core (>0.06% and up to 5% U3O8) and a diffuse "low-grade" aureole with 0.02% to 0.06% U3O8 (Homeniuk, Clark and Bonnar, 1982).

In 1978, radioactive sandstone boulders were discovered at Sabre by Marline Oil, which led to additional prospecting, ground geophysics, rock sampling, and biogeochemical sampling over the three exploration years, but no drill holes were completed1. In 2006, UEX Corporation targeted an airborne conductor with drill hole MNL-02, which intersected intense dravite alteration in the sandstone column2. Dravite is commonly associated with hydrothermal alteration in the Athabasca Basin and can be found in close proximity to unconformity-type uranium mineralization.

The technical information in this news release has been reviewed and approved by Jody Dahrouge, P.Geo., a Director of ALX, who is a Qualified Person in accordance with the Canadian regulatory requirements set out in National Instrument 43-101.

Historical geochemical results and geological descriptions quoted in this news release were taken directly from assessment work filings published by the Government of Saskatchewan. Management cautions that historical results were collected and reported by past operators and have not been verified nor confirmed by its Qualified Person, but create a scientific basis for ongoing work in the Sabre project area. Management further cautions that historical results or discoveries on adjacent or nearby mineral properties are not necessarily indicative of the results that may be achieved on ALX's mineral properties.

ALX's mandate is to provide shareholders with multiple opportunities for discovery by exploring a portfolio of prospective mineral properties, which include uranium, nickel-copper-cobalt and gold projects. The Company uses the latest exploration technologies and holds interests in over 200,000 hectares of prospective lands in Saskatchewan, a stable Canadian jurisdiction that hosts the highest-grade uranium mines in the world, a producing gold mine, and production from base metals mines, both current and historical.

ALX also owns 100% interests in the Firebird Nickel Project (now under option to Rio Tinto Exploration Canada Inc., who can earn up to an 80% interest), the Flying VeeNickel/Gold and Sceptre Gold projects, and can earn up to an 80% interest in the Alligator Lake Gold Project, all located in northern Saskatchewan, Canada. ALX owns, or can earn, up to 100% interests in the Electra Nickel Project and the Cannon Copper Project located in historic mining districts of Ontario, Canada, the Vixen Gold Project (now under option to First Mining Gold Corp., who can earn up to a 100% interest in two stages), and in the Draco VMS Project in Norway.

For more information about the Company, please visit the ALX corporate website at www.alxresources.com or contact Roger Leschuk, Manager, Corporate Communications at: PH: 604.629.0293 or Toll-Free: 866.629.8368, or by email: rleschuk@alxresources.com

Statements in this document which are not purely historical are forward-looking statements, including any statements regarding beliefs, plans, expectations or intentions regarding the future. Forward-looking statements in this news release include: the Sabre Uranium Project ("Sabre") is prospective for uranium mineralization; the Company's plans to undertake exploration activities at Sabre, and expend funds on Sabre. It is important to note that the Company's actual business outcomes and exploration results could differ materially from those in such forward-looking statements. Risks and uncertainties include that ALX may not be able to fully finance exploration at Sabre, including drilling; our initial findings at Sabre may prove to be unworthy of further expenditure; commodity prices may not support exploration expenditures at Sabre; and economic, competitive, governmental, societal, public health, environmental and technological factors may affect the Company's operations, markets, products and share price. Even if we explore and develop Sabre, and even if uranium or other metals or minerals are discovered in quantity, Sabre may not be commercially viable. Additional risk factors are discussed in the Company's Management Discussion and Analysis for the Six Months Ended June 30, 2021, which is available under the Company's SEDAR profile at www.sedar.com. Except as required by law, we will not update these forward-looking statement risk factors.

To view the source version of this press release, please visit https://www.newsfilecorp.com/release/96754

Challenger Exploration (ASX: CEL) (“CEL” the “Company”) is pleased to announce outstanding results from the ongoing drill program at the Hualilan Gold Project, located in San Juan Argentina, with extension and infill holes from the Verde Zone reported in this announcement.

VIDEO — Lynette Zang: A Tectonic Shift is Brewing, Get Outside the System Now

A "tectonic shift" is coming as the US moves from one interest rate benchmark to another.

That's according to Lynette Zang, chief market analyst at ITM Trading. She told the Investing News Network that as of June 30, 2023, the US will use the SOFR rate instead of the LIBOR rate, which means contracts across the board will be revalued.

At this year's Vancouver Resource Investment Conference (VRIC), Lobo Tiggre, editor and founder of IndependentSpeculator.com, spoke about the difference between rationalism and empiricism when it comes to investing.

For Tiggre, gold and uranium are two "now" sectors that he's paying attention to.

The world holds several hundred active gold mines, but not all are created equal. So what makes a world-class deposit?

The world’s largest gold operation by production is Barrick Gold (TSX:ABX,NYSE:GOLD) and Newmont's (TSX:NGT,NYSE:NEM) Nevada Gold Mines joint venture in the US. An important source of gold, the mining complex is comprised of 10 underground mines and 12 surface mines, including the famous Cortez and Goldstrike mines.

Element79 Gold Corp. (CSE:ELEM) (OTC:ELMGF) (FSE:7YS) ("Element79 Gold", the "Company") provides an update with respect to the previously announced Management Cease Trade Order (the "MCTO") issued by the British Columbia Securities Commission on January 4, 2023. The Company is providing notice in accordance with National Policy 12-203 – Management Cease Trade Orders (“NP 12-203”). The MCTO was issued by the BCSC on January 4, 2023. It prevents the Company’s President and Chief Financial Officer from trading in the Company’s securities but does not affect the ability of other shareholders, including the public, to trade in the securities of the Company.