“These four holes are the first in a series testing the main oxide historic resource zone to depth,” commented Golden Independence President Tim Henneberry. “This main area was historically mined for gold veins so higher grade intervals within the oxide zone, while not unexpected, are a nice bonus as we expand the Independence Project’s mineralized foot print in advance of the upcoming H1 resource estimate,” he concluded.

“Hole AGEI-32 returned 85 feet grading 0.52 g/t Au and 4.6 g/t Ag within the known mineralized zone of the Independence Project and also returned 80 feet grading 9.11 g/t Au and 25.2 g/t Ag outside of the known mineralized zone,” noted Golden Independence CEO Christos Doulis. “These results support our model that higher grade areas within the oxide zone are the result of vertical fracture structures linked to the deeper sulfide mineralization and reinforce our belief that results from our recent drill program will significantly expand and increase the historic oxide resource at the Independence Project,” he continued. 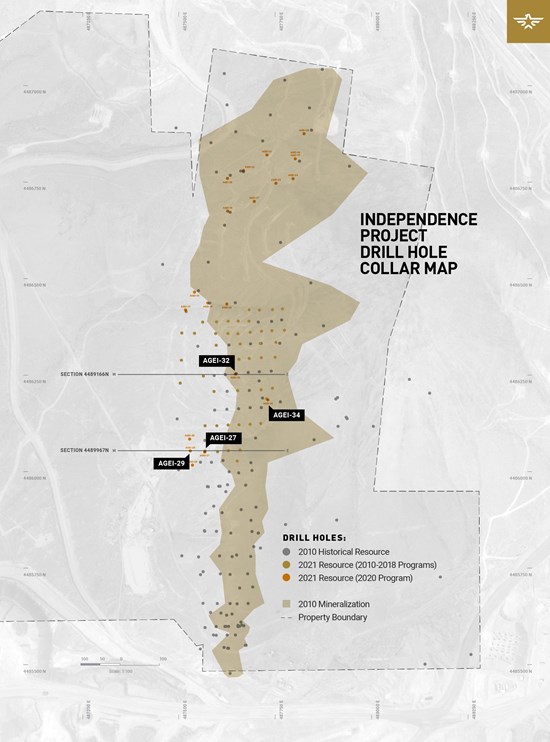 To view an enhanced version of this graphic, please visit:
https://goldenindependence.co/docs/GI-2020_DrillMap_AGEI_27-29-32-34.pdf

The drill chip logs for the 440 foot to 470 foot interval in AGEI-32 was described as a well developed zone of gossan within the chert. Iron oxide was found as staining and fracture filling. Remnant sulfides and orange limonite cavities were also noted along with one mm size chunk of massive pyrite. Arsenopyrite and bornite were also noted in the chips and were reflected in over limit arsenic and elevated copper in the multi-element analyses. Only some secondary quartz was noted. The gold and silver values for the continuous 5 foot intervals from 430 feet to 510 feet can be found at the following link: 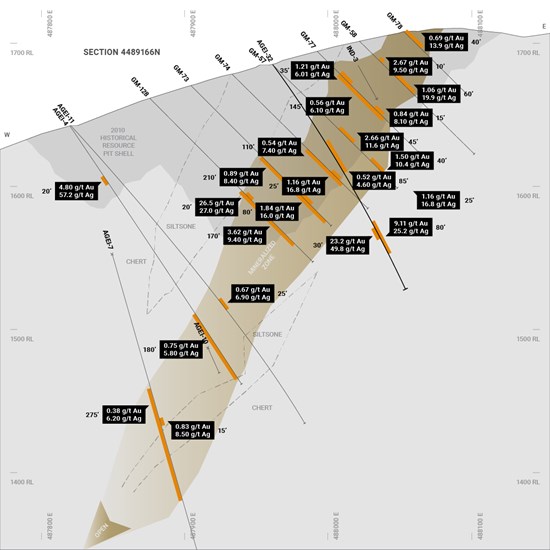 To view an enhanced version of this graphic, please visit:
https://goldenindependence.co/docs/CrossSection_AGEI-32.pdf 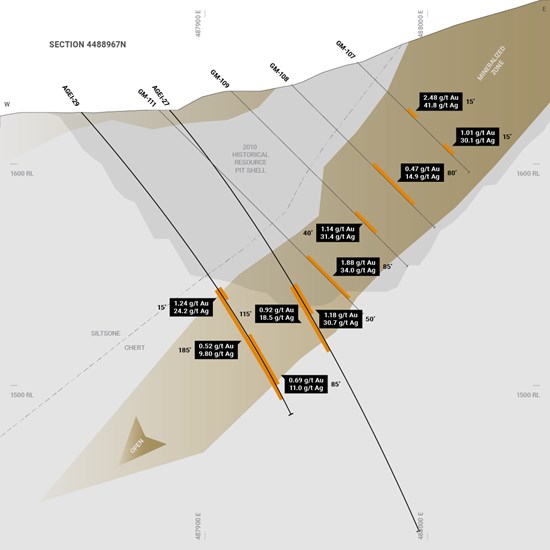 To view an enhanced version of this graphic, please visit:
https://goldenindependence.co/docs/CrossSection_AGEI-27-29.pdf

All samples were shipped to the ALS Minerals prep lab in Elko, Nevada with analyses completed at the ALS Minerals Lab in Reno, Nevada. Both facilities are ISO 9001:2015 and ISO/IEC 17025:2017 certified. All samples are analyzed utilizing ALS ME-ICP41 procedure, an aqua regia digestion with ICP-AES finish, with gold determined by the Au-AA23 procedure, a 30-gram fire assay with AAS finish. ALS Minerals is independent from Golden Independence. Golden Independence institutes a rigorous QA/QC program of duplicate samples, blanks and standards. Based on a review of the QA/QC data is not aware of any other factors that could materially affect the accuracy or reliability of the data referred to herein.

Golden Independence Mining Corp. is an exploration company currently focused on exploring the advanced-stage Independence Gold Property located in the Battle Mountain-Cortez Trend, Nevada and the Champ precious metal property near Castlegar, British Columbia. The Independence Gold Property benefits from over US$25 million in past exploration, including over 200 holes drilled, and is located adjacent to Nevada Gold Mines’ Phoenix-Fortitude mining operations in the Battle Mountain-Cortez trend of Nevada.

To view the source version of this press release, please visit https://www.newsfilecorp.com/release/77358