Canex Metals Inc. ("CANEX" or the "Company") is pleased to announce assay results have been received for 8 additional drill holes from the Company's 2021 reverse circulation drilling program at the Gold Range Project, Arizona

Results for reverse circulation drill holes GR21-20 to 27 from the Company's 2021 drilling program at the Gold Range project have been received and are presented here. These holes were drilled at the Eldorado Zone where the Company discovered bulk tonnage style gold mineralization potential in late 2020 (see CANEX news release dated November 2, 2020). The location, orientation, and total depths of each hole are summarized in Figure 2.

Holes GR21-24, 25 and 26 were all drilled from the same pad and oriented at different azimuths to test a broad area, and all three holes hit gold mineralization. Holes GR21-24, 25, and 27 are shown on cross section D-D' (Figure 3). Hole GR21-25 was oriented towards the north and tested a mostly covered area returning strong gold mineralization in two mineralized zones that are interpreted to be flat dipping. The upper mineralized zone in hole GR21-25 returned 0.3 g/t gold over 10.6 metres starting at 22.9 metre depth, the lower zone returned 1.3 g/t gold over 21.3 metres starting at 54.9 metres depth, with the hole ending in mineralization. The lower zone in hole GR21-25 contains a zone of higher grade mineralization containing 2.4 g/t gold over 10.6 metres, including 5.1 g/t gold over 4.5 metres. The upper and lower mineralized zones appear to increase in grade toward the northwest where they remain open for expansion. Holes GR21-25 and 26 are strongly oxidized over their entire lengths suggesting a deep level of oxidation within the mineralized area.

Dr. Shane Ebert, President of the Company stated, "All of the holes drilled at Eldorado to date have intersected anomalous gold and most have returned significant intervals grading 0.2 g/t and above. This drill program is confirming and expanding our initial discovery and helping us understand the zone which still remains open in multiple directions and at depth. Hole GR21-25 is especially significant as the recognition of multiple stacked gold zones further increases the size potential of the system. The intercept of 1.3 g/t gold over 21.3 metres seen in hole GR21-25 is a highly encouraging grade in the context of bulk tonnage oxidized gold targets in the Western United States, which can have cut off grades below 0.2 g/t and average grades around 0.5 g/t gold". 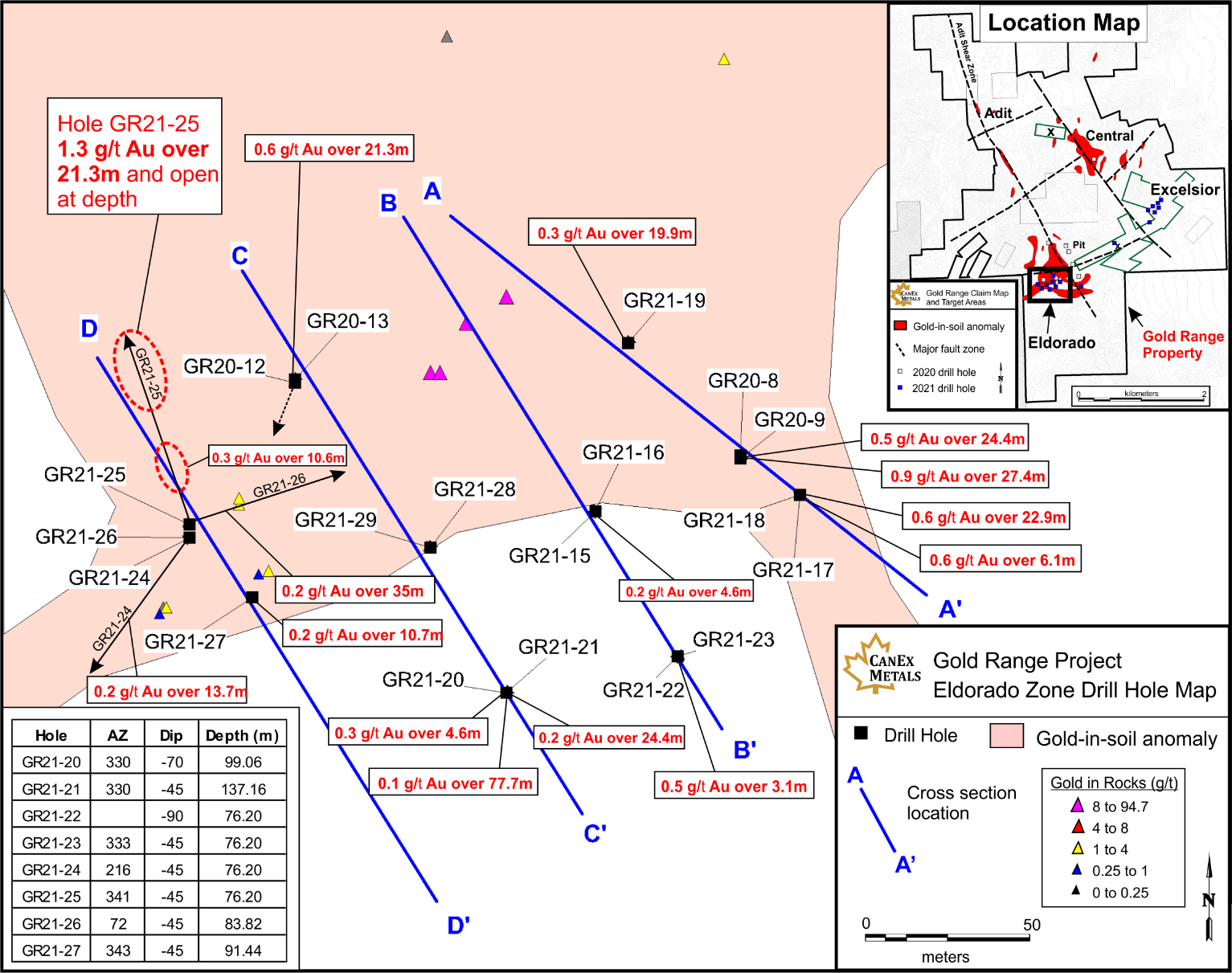 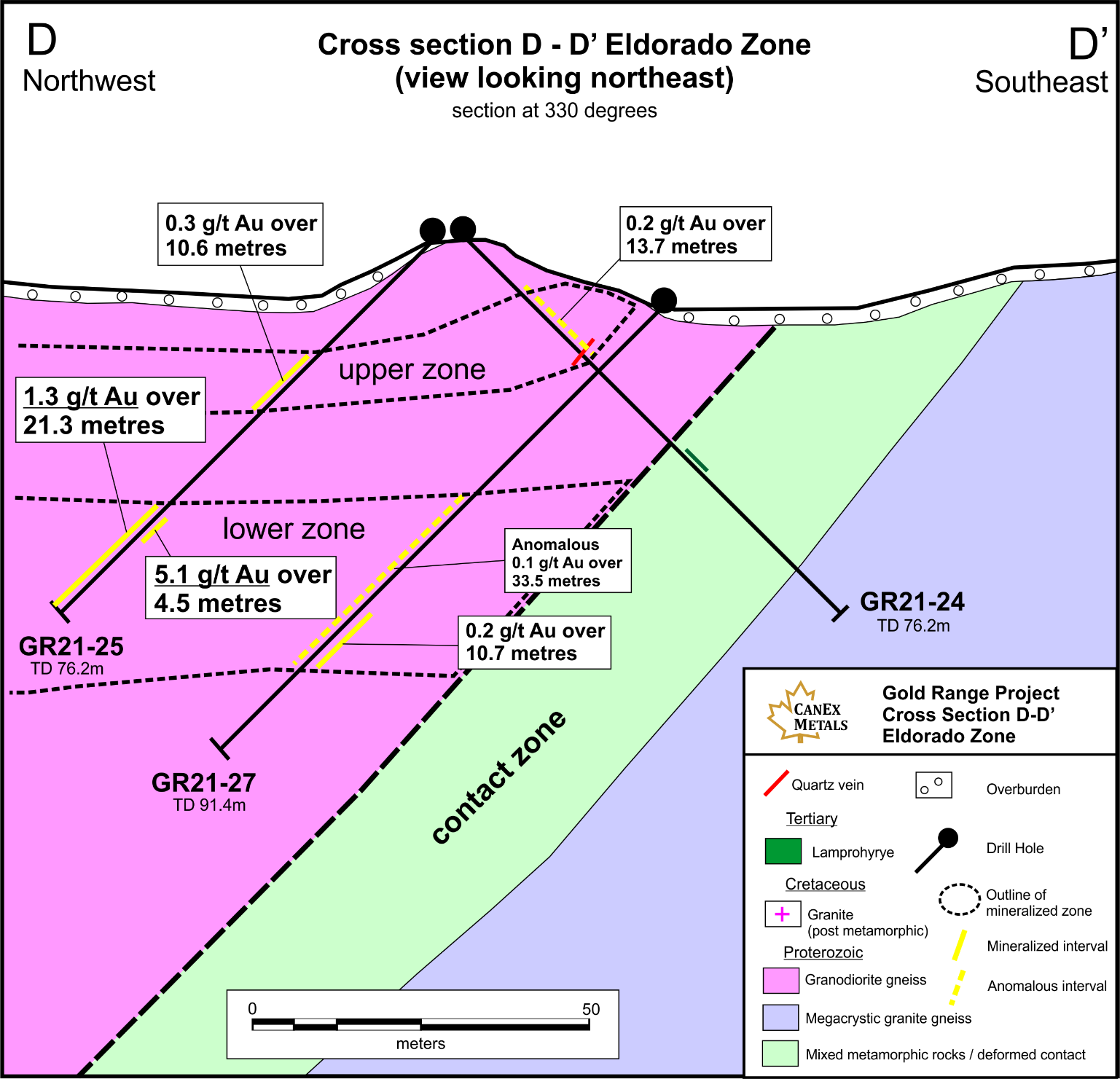 In early 2021 the Company successfully completed 34 reverse circulation drill holes across 2.5 kilometres of strike length along the southern portion of the Gold Range Property. In total 2357.6 metres were drilled in holes ranging from 38 to 137 metres deep. Fifteen holes were drilled at the Eldorado Zone to test and expand the Company's previously announced bulk tonnage oxide discovery, 5 holes tested various targets across the southern part of the property and 14 holes tested the Excelsior Mine area.

Results for an additional 21 drill holes are pending and will be released as they are received, compiled, and interpreted.

Canex Metals (TSX.V:CANX) is a Canadian junior exploration company focused on advancing its Gold Range Project in Northern Arizona. Led by an experienced management team, which has made three notable porphyry and bulk tonnage discoveries in North America, CANEX has identified and tested several targets which host the potential for bulk tonnage oxide gold mineralization at its Gold Range Project. Drilling in 2020 identified near surface bulk tonnage gold potential at the Eldorado Zone with Hole GR20-9 returning 0.9 g/t gold over 27.3 metres including 5.9 g/t gold over 1.5 metres. The new discovery correlates with a strong gold in soil anomaly and sheeted quartz veinlets and stockworks within metamorphic rocks. CANEX has recently entered into an LOI to acquire the Excelsior Mine, located 2.5 kilometres from Eldorado on the eastern side of the Gold Range Property. Excelsior has seen historic underground and open pit mining along a zone 200 metres long and open along strike. Gold mineralization is centered along the shallow dipping high grade Excelsior Vein which is surrounded by a halo of sheeted quartz and quartz carbonate veins 20 to 50 metres wide.

Wheaton Precious Metals™ Corp. ("Wheaton" or the "Company") announces that the nominees listed below were elected to the Board of Directors at the 2022 Annual and Special Meeting of Shareholders. Detailed results of the vote for the Board of Directors of the Company are shown below. As previously announced, Mr. Doug Holtby who had served as Chair of Wheaton is retiring and did not stand for reelection, and Mr. George Brack has been appointed the role of Chair of the Board. In addition, Ms. Jaimie Donovan has been elected to the Board.

We're wrapping up what's been yet another bumpy week for gold.

The yellow metal started at around US$1,870 per ounce, but by the time of this writing on Friday (May 13) morning, it had declined to just below the US$1,810 level.

Diverse factors have been at play in the market this week, including major strength in the US dollar, which reached its highest point in 20 years early in the period. The latest Consumer Price Index data was also released — it shows an increase of 0.3 percent month-on-month and an 8.3 percent rise year-on-year.

Vancouver, British Columbia, Canada May 13, 2022 TheNewswire - Jazz Resources Inc. ( TSXV:JZR ) (the " Company " or " JZR ") is pleased to announce that it has closed the first portion of its previously announced non-brokered private placement offering (the " Offering ") of units (the " Units ") by issuing 860,250 Units at a price of $0.80 per Unit for gross proceeds of $688,200.  Each Unit is comprised of one common share (a " Share ") in the capital of the Company and one share purchase warrant (a " Warrant ").  Each Warrant shall entitle the holder to acquire one additional common share in the capital of the Company at a price of $1.20 per Share for a period of 12 months after the date of issuance of the Warrants.

TomaGold Corporation (TSXV: LOT) (OTCQB: TOGOF) (" TomaGold " or the " Corporation ") is pleased to announce that it has retained the services of Abitibi Geophysics of Val-d'Or to conduct an induced polarization (IP) survey over the southern portion of its 100%-owned Obalski property, located 2 km south of Chibougamau, Quebec. In preparation for the survey, the Corporation has cut an additional 9 km of lines covering the southern portion of the property.

In December 2021, Abitibi Geophysics conducted an IP survey and produced a preliminary report that demonstrated the presence of large geophysical anomalies to the west and south of the Obalski deposit, right at the edge of the survey grid. The same report also indicated that the geophysical coverage was insufficient, leading the Corporation to undertake this new survey and carry out linecutting during the winter of 2021-22.

Mako Gold Limited (“Mako” or “the Company”; ASX:MKG) is pleased to advise that it has commenced a 2,000m maiden RC drilling program at the Korhogo Nord Permit which, with the Ouangolodougou Permit constitute the Korhogo Project1 . The permits collectively cover 296km2 hosting 17km of faulted greenstone granite contact as shown in Figure 1. Both permits are 100% owned by Mako and are readily accessible from the Mako Field Office.