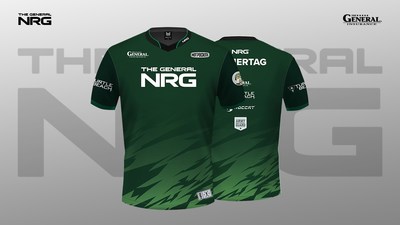 “We were thrilled to see the voting turnout from The General NRG’s fans,” said Kale Sligh, Vice President of Marketing for The General. “From the onset of this partnership, it has always been our goal to authentically connect with the fans and we thought this was a perfect way to get those dedicated fans in on the fun.”

“The General NRG is very excited to debut their new jerseys for Season XI,” said Brett Lautenbach , President of NRG Esports. “First and foremost, it’s awesome that they were selected by the fans, but the jersey patch is also a true representation of The General NRG Rocket League team’s storied history over the past five years. Not many other teams have the historic legacy that our team does, and this patch truly showcases the team’s hard work and dedication to Rocket League.”

The General NRG Rocket League team has consistently proven to be one of the most competitive teams in the space and this unprecedented partnership between the two brands that was announced in April continues to set the team up for more success and growth. In addition to the jersey fan vote, The General NRG partnership – a first of its kind in North American Rocket League history – also includes the team’s naming rights, as well as elevating NRG’s owned and operated “The Grid presented by The General” Twitch streams and productions to give viewers an even better experience.

Shaquille O’Neal , a part-owner of NRG and longtime brand ambassador and loyal customer of The General, was instrumental in bringing this partnership together. He recognized the clear alignment between the two brands when it comes to their audiences. From the very beginning, there was a natural synergy between the high-octane gameplay of Rocket League and the need for quality car insurance at affordable rates. This partnership was also a natural extension of The General’s recent brand refresh and new ad campaign starring Shaq to dispel misperceptions of the brand and invest in programs that reflect the diverse backgrounds and interests of its customer base.

“The General NRG team has some of the best fans in the game and it was really important to everyone that we directly involve the team’s fans in this partnership,” said Shaquille O’Neal . “I can’t wait to get my hands on the new jersey to support the team as they head into Season XI.”

The General NRG will debut the winning jersey design for Season. The new jerseys are also available for purchase at shop.nrg.gg.

About The General Insurance
The General Automobile Insurance Services, Inc. (The General ® ) is a licensed insurance agency and subsidiary of PGC Holdings Corp. (PGC), which is wholly owned by American Family Mutual Insurance Company. Through its insurance company subsidiaries and their predecessors, PGC has been writing automobile insurance since 1963, serving customers who may find it difficult to obtain insurance from other carriers at a reasonable rate. Visit www.thegeneral.com or follow The General on Twitter , Instagram and Facebook .

About Shaquille O’Neal
Shaquille O’Neal is one of the world’s most successful athlete-turned-businessman, whose accomplishments both on and off the court have translated into a highly sought-after consumer brand. As an entrepreneur, sports analyst, DJ, restaurateur, and brand ambassador, Shaquille O’Neal’s signature “Business of Fun” mantra resonates throughout each of his countless endeavors. The 15-time NBA All-Star’s unprecedented athletic career spanned nearly two decades and earned him countless awards and honors, including NBA Most Valuable Player, NBA Rookie of the Year, four NBA Championships and a First Ballot NBA Hall of Famer.  Currently, O’Neal is an analyst on TNT’s Emmy Award-winning “Inside the NBA.”
O’Neal, who has a PhD in Leadership and Education, gives back through a number of annual philanthropic programs including Shaq to School, Shaqsgiving, and Shaq a Claus. The launch of his Las Vegas eatery Big Chicken has further elevated Shaquille’s status as he has positioned himself as a successful restaurateur. A second Big Chicken location is open in Glendale, CA and additional locations will debut at sea on Carnival Cruise Lines Radiance and Mardi Gras . Follow Shaquille O’Neal on Facebook , Twitter and Instagram .