“The drilling of stratiform sulphides on our first drill hole below the mine workings at Fredriksson Gruvan is of great importance, as it most assuredly confirms the continuity of the mineralization at depth below the old mine”. Stated Patricio Varas , Chairman and CEO of Norden Crown Metals. “Furthermore, the confirmation that we are testing a Broken Hill Type Zn-Pb-Ag mineralized prospect is hugely encouraging as these style deposits are very few around the world and include some of the largest accumulations of Pb-Zn-Ag on Earth 1,3 .

Ongoing diamond drilling at Fredriksson Gruva will test the continuity of massive sulphide mineralization below the historical mine workings where recent 3D geological modeling demonstrates that silver-zinc-lead mineralization could extend to at least 400 meters depth.

Visual core inspection by Norden’s Senior technical staff confirms that GUM-20-09  intersected an 11m massive to semi-massive sulphide body of mineralization extending from 123m to 134m .  Drill core is currently being cut and sampled.  Samples will be shipped to ALS in Malå, Sweden for analysis and assay results are expected in 4 to 6 weeks.

Significant observations from GUM 20-09 that are suggestive of BHT style mineralization include:

Norden Crown’s geological modelling is based on historical mining and drilling data and demonstrates that silver-lead-zinc mineralized zones are associated with a moderately east plunging fold geometry and mineralization is open in all directions (Figure 1). Test mining from an open pit where these zones reach the surface produced 21,000 tonnes grading 53 g/t silver, 5.13% zinc, and 1.7% lead 2 . Subsequent underground mining production down to 91 meters produced and additional 45,000 tonnes grading 49 g/t silver, 5.77% zinc, 1.84% lead 2 . 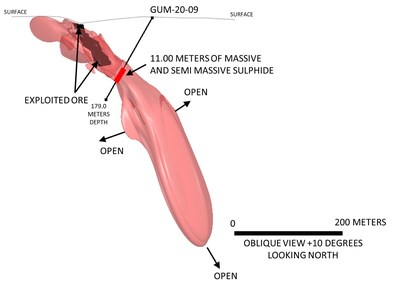 Figure 1.  Oblique 3D interpretation of mineralization at Fredriksson Gruvan showing the location of the 11.00 meters of semi and massive sulphide mineralization in hole GUM-20-09.  Note that the mineralization is interpreted to extend beyond the limits of historical drilling at depth and laterally.

Fredriksson Gruvan was discovered in 1976 by LKAB Prospektering AB 2 .  Exploration was carried out in 1976 and 1977 including surface trenching, sampling and drilling of 9 diamond drill holes, which identified precious metal enriched base metal mineralization 3 .  In 1977, AB Statsgruvor (ABS) acquired the Fredrikssongruvan prospect and conducted open pit test mining in 1978.  Test mining was conducted to a depth of 20 meters below surface and produced 21,500 tonnes grading 53 g/t Silver, 5.13% zinc, and 1.7% lead 3 .  A total of 11 additional holes were drilled in 1979 to test the down plunge extent of mineralization.  Between 1980 and 1981 mining activites resumed and an underground tram was installed.  A total of  45,000 additional tonnes grading 49 g/t silver, 5.77% zinc, 1.84% lead were produced from workings that extend to a depth of 91 meters (4 underground levels) 2 .  Norden Crown Metals Corp. staked the the Fredriksson Gruva prospect as part of a larger staking acquisition (Gumsberg nr 9) in March, 2017.  This licence is refered to as “Gumsberg West” and forms the western half of the highly prospective Gumsberg Project.