Norden Crown Metals Corp. is pleased to announce that it has completed ~ 400 line kilometers of a 2-Phase UAV airborne magnetic geophysical program at the 100% owned Burfjord Copper Project in northern Norway. Norden Crown in partnership with Boliden Mineral AB is actively drill testing a variety of geological, geochemical, and geophysical target anomalies on the property and the results from this tightly spaced … Norden Crown Metals Corp. (” Norden Crown ” or the ” Company “) (TSXV: NOCR) (OTC: NOCRF) ( Frankfurt : 03E) is pleased to announce that it has completed ~ 400 line kilometers (Phase I) of a 2-Phase UAV airborne magnetic geophysical program at the 100% owned Burfjord Copper Project (” Burfjord ” or the ” Project “) in northern Norway. Norden Crown in partnership with Boliden Mineral AB (” Boliden “), is actively drill testing a variety of geological, geochemical, and geophysical target anomalies on the property and the results from this tightly spaced survey (see below) are expected to help identify new exploration targets on the property and enhance and prioritize existing drill targets (Figure 1).  Phase II of the survey is expected to commence in the coming weeks.  Previous drilling by Norden Crown (see March 20, 2019 News Release) at Burfjord returned compelling results including an intercept of 32 metres averaging 0.56% copper and 0.26 gt gold (including 3.46 metres of 4.31% copper and 2.22 gt gold) at shallow depths below a cluster of historic mine workings 1,2 . Historical drilling on the Project (Cedarsgruvan) was reported to have returned 7.0 metres averaging 3.6% copper 3 .

Patricio Varas , Chairman and CEO of Norden Crown stated, “High resolution magnetic geophysics is proving to be an excellent mapping and targeting tool at Burfjord given the high magnetic contrast of the copper host rocks.  The Company intends to fully integrate these data with our existing lithological, structural, geophysical and geochemical 3D modeling to enhance existing targets and identify new ones.” 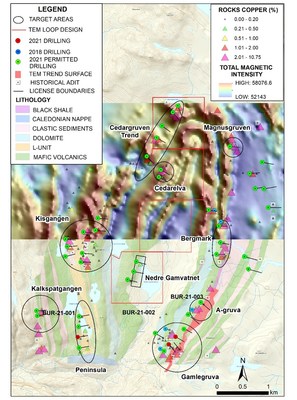 The Burfjord UAV Magnetic Survey covers approximately 857 line kilometers and will be collected by GRM Geophysical Rock and Mechanical Services Inc. ( Finland ).  The survey will be flown along lines spaced at 100 meters with tie lines at 1000 meters spacing. The survey is broken down into two phases including a Phase I portion covering the northern half of the project area (~400 line kilomters) and a Phase II component (600 line kilomters) covering the southern portion of the property (Figure 1).  Survey will be flown with a UAV Quadcopter carrying a GEM-GSMP35 potassium magnetometer (30 meter sensor height).  A GEMGSM19 Overhauser magnetometer will be used as a base station.

Norden Crown entered into an option agreement (the “Agreement”) with Boliden in respect to Burfjord (see June 10, 2020 News Release). In order to earn its 51% interest in the Project, Boliden must fund 100% of the exploration programs by spending US$6 Million over the next four years.

Overview of the Burfjord Project

The Project, located in the Kåfjord Copper Belt near Alta, Norway is highly prospective for Iron Oxide Copper Gold (IOCG) and Sediment Hosted Copper mineral deposits.  High-grade copper-gold veins at Burfjord that were historically mined (pre 20th century) at reported cutoff grades of 3-5% Cu are surrounded by envelopes of stockwork veins or disseminations of copper mineralization extending tens to hundreds of metres laterally into the host rocks. Norden Crown and Boliden believe this mineralization has economic potential and represents an attractive bulk tonnage exploration drilling target.

Copper bearing veins in the area  are dominated by ferroan carbonate, sodium-rich minerals, and iron-oxide minerals (magnetite and hematite), but also contain the economically important minerals chalcopyrite, bornite and chalcocite in addition to cobalt-rich pyrite as generally coarse grained (often 0.5 centimetre to multi-centimetre scale) disseminations in the veins.

Burfjord is comprised of six exploration licenses totaling 5,500 hectares in the Kåfjord Copper Belt near Alta in Norway . During the nineteenth century, copper mineralization was mined from over 30 historic mines and prospects developed along the flanks of a prominent 4 x 6-kilometre fold (anticline) consisting of interbedded sedimentary and volcanic rocks.  Many of the rocks in the anticline are intensely hydrothermally altered and contain sulphide mineralization.

Norden Crown is a mineral exploration company focused on the discovery of silver, zinc, copper, and gold deposits in exceptional, historical mining project areas spanning Sweden and Norway.  The Company aims to discover new economic mineral deposits in historical mining districts that have seen little or no modern exploration techniques.  The Company is led by an experienced management team and an accomplished technical team, with successful track records in mineral discovery, mining development and financing.