Norden Crown Metals Corp. is pleased to announce the commencement of an exploration drilling program at its 100% owned Burfjord Copper Project in northern Norway. Norden Crown in partnership with Boliden Mineral AB is drill testing a variety of geological, geochemical, and geophysical target anomalies identified during the successful 2020 exploration programs. The objective of the drill program is to continue …

Norden Crown Metals Corp. (” Norden Crown ” or the ” Company “) (TSXV: NOCR) (OTC: NOCRF) ( Frankfurt : 03E) is pleased to announce the commencement of an exploration drilling program (~2,500 metres) at its 100% owned Burfjord Copper Project (” Burfjord ” or the ” Project “) in northern Norway. Norden Crown in partnership with Boliden Mineral AB (” Boliden “), is drill testing a variety of geological, geochemical, and geophysical target anomalies identified during the successful 2020 exploration programs. The objective of the drill program is to continue testing copper-gold grades and continuity of new targets, historical mines, and prospects. Previous drilling by Norden Crown (see March 20, 2019 News Release) at Burfjord returned compelling results including an intercept of 32 metres averaging 0.56% copper and 0.26 gt gold (including 3.46 metres of 4.31% copper and 2.22 gt gold) at shallow depths below a cluster of historic mine workings 1,2 . Historical drilling on the Project (Cedarsgruvan) was reported to have returned 7.0 metres averaging 3.6% copper 3 .

Patricio Varas , Chairman and CEO of Norden Crown stated, “The joint Norden-Boliden exploration team is excited to continue drill testing the copper endowed Burfjord Anticline for its potential to host economic IOCG style mineralization.  The Company has identified numerous high grade zones within the East, West and Hinge domains of the anticline and we continue to utilize  magnetic and electromagnetic geophysical surveys to enhance the existing targets and to guide the planned diamond drilling.”

Norden Crown has engaged Arctic Drilling NOR ( Norway ) to complete ~ 2,500 metres of diamond drilling with the objective of expanding the footprint of mineralization identified in 2019 (see March 20, 2019 News Release) and to test additional geological, geochemical and geophysical targets identified in the 2020 field programs.  Arctic Drilling has now mobilized onto the Burfjord property and drilling has commenced.  The summer 2021 diamond drilling program is designed to follow up on 3 holes (970.5 metres) drilled in the Peninsula and Gamlegruva target areas in February and March this year. The winter drill program was terminated due to logistical complications caused by inclement winter weather conditions and restrictions imposed by Covid-19 safety measures.

The 2021 exploration drilling program at Burfjord is focused on a number of copper targets that contain or are surrouned by historical adits, pits and workings within the extensively iron-carbonate altered Burfjord Anticline.  These targets have been identified and prioritized using lithological and structrual mapping, extensive rock and soil sampling and ground based electromagnetic geophysics (Figure 1).  High priority target areas within the East, Hinge and West zones of the anticline are described below.

The “East Limb” targets constitute a ~ 5 kilometer-long trend of discontinuously outcropping copper occurrences and historical mine adits characterized by disseminated copper sulphide mineralization (chalcopyrite and sporadic bornite) associated with hematite-jasper breccia and/or carbonate veins hosted by chlorite (locally albite) or potassically altered pillow basalts and albitized black shales (Figure 1).  As part of a surface exploration program in 2020 an electromagnetic (TEM) anomaly (130-150 Siemens) was identifed in the southern portion of the East Limb that is approximately 1,900 metrers in strike with a near-vertical dip (Figures 1 and 2).  This feature occurs near the mafic volcanic-albitized black shale contact and is the target horizon for a number of the planned drill holes in the East Limb. 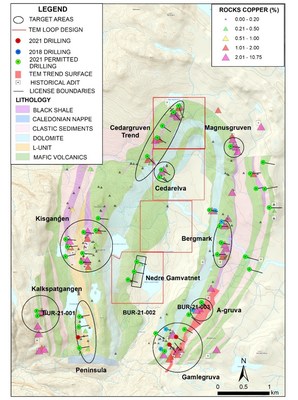 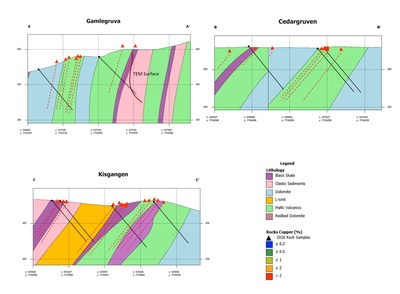 The Hinge Zone is a structural target that in the hinge  of the Burfjord Anticline and is characterized by intensely albitized black shales, breccias (e.g. Cedarsgruvan workings) and albitized dolomite (e.g., Cedarelva workings)  in widespread, intense iron-carbonate alteration.  Disseminated copper sulfides and structurally controlled high-grade copper sulphide bearing veins are present within this target area (Figure 1).

The geology of West Limb is dominated by a 3,000 meter by 400 meter albite-iron carbonate-magnetite altered clastic sedimentary unit (L-Unit) that is locally brecciated and contains disseminated copper sulphides (chalcopyrite) and chalcopyrite bearing quartz-carbonate veins.  Historic adits are present within and along the flanks of this unit and are the focus exploratory drilling in this program.

Norden Crown entered into an option agreement (the “Agreement”) with Boliden in respect to Burfjord (see June 10, 2020 News Release). In order to earn its 51% interest in the Project, Boliden must fund 100% of the exploration programs by spending US$6 Million over the next four years.

Overview of the Burfjord Project

The Project, located in the Kåfjord Copper Belt near Alta, Norway is highly prospective for Iron Oxide Copper Gold (IOCG) and Sediment Hosted Copper mineral deposits.  High-grade copper-gold veins at Burfjord that were historically mined (pre 20th century) at reported cutoff grades of 3-5% Cu are surrounded by envelopes of stockwork veins or disseminations of copper mineralization extending tens to hundreds of metres laterally into the host rocks. Norden Crown and Boliden believe this mineralization has economic potential and represents an attractive bulk tonnage exploration drilling target.

Copper bearing veins in the area  are dominated by ferroan carbonate, sodium-rich minerals, and iron-oxide minerals (magnetite and hematite), but also contain the economically important minerals chalcopyrite, bornite and chalcocite in addition to cobalt-rich pyrite as generally coarse grained (often 0.5 centimetre to multi-centimetre scale) disseminations in the veins.

Burfjord is comprised of six exploration licenses totaling 5,500 hectares in the Kåfjord Copper Belt near Alta in Norway . During the nineteenth century, copper mineralization was mined from over 30 historic mines and prospects developed along the flanks of a prominent 4 x 6-kilometre fold (anticline) consisting of interbedded sedimentary and volcanic rocks.  Many of the rocks in the anticline are intensely hydrothermally altered and contain sulphide mineralization.

Norden Crown is a mineral exploration company focused on the discovery of silver, zinc, copper, and gold deposits in exceptional, historical mining project areas spanning Sweden and Norway.  The Company aims to discover new economic mineral deposits in historical mining districts that have seen little or no modern exploration techniques.  The Company is led by an experienced management team and an accomplished technical team, with successful track records in mineral discovery, mining development and financing.