Denison Mines Corp. ("Denison" or the "Company") (TSX: DML) (NYSE: DNN) is pleased to report the discovery of multiple new high-grade intercepts of unconformity-hosted uranium mineralization in the final three drill holes completed during the winter 2022 exploration program on the Waterfound River property ("Waterfound").  The results were highlighted by drill hole WF-68, which returned a broad zone of uranium mineralization, including a peak interval of 5.91% eU 3 O 8 over 3.9 metres (0.05% eU 3 O 8 cut-off) with a sub-interval grading 25.30% eU 3 O 8 over 0.7 m located approximately 800 metres west, along the La Rocque Conductive Corridor, of the previously discovered high-grade mineralization (including 4.49% U 3 O 8 over 10.53 metres) at the Alligator Zone. PDF Version

Andy Yackulic , P. Geo., Denison's Director, Exploration, commented, "We are excited to see additional high-grade mineralization discovered within the La Rocque corridor, which also hosts Cameco's La Rocque Lake Zone and IsoEnergy's Hurricane Zone.  Not only has the drilling at Waterfound intersected high-grade uranium, but the mineralization remains open along strike in both directions."

David Cates , Denison's President & CEO, added, "Denison is appreciative of the efforts of Orano Canada to breathe new life into Waterfound.  Denison has a unique partnership with Orano – as joint owners of the McClean Lake mill and the nearby Midwest project.  This discovery at Waterfound is well situated relative to the McClean Lake mill and has the potential to translate into a further important source of future mill feed for the McClean Lake joint venture.  Waterfound is also a good example of the significant, but often underappreciated, discovery potential associated with Denison's well situated and prospective exploration property portfolio."

Drill holes WF-67, WF-68, and WF-68-1 were all drilled on line 4000E, approximately 800 m along strike to the west of the Alligator Zone, to test the potential for uranium mineralization along the up-dip projection of a graphitic structure intersected at depth in historical drill hole WF-50.  All three drill holes successfully identified high-grade uranium mineralization, highlighted by hole WF-68, which returned 5.91% eU 3 O 8 over 3.9 metres.  The mineralized intersections are illustrated in Figure 1 and summarized in Table 1 below.

The 2022 exploration program was designed to test for the potential expansion of previously discovered mineralization in the Alligator Zone, as well as to test for new mineralization in the surrounding area along the La Rocque conductive corridor (see Figure 2).  The program was planned to occur during both the winter and summer drilling seasons with approximately 7,400 metres of diamond drilling in an estimated 12 drill holes.  Six diamond drill holes, totalling 3,175.4 metres, were completed as part of the winter drill program.

The first two drill holes of the winter program (WF-64 and WF-65) were completed on the eastern end of the property to test the D-1 conductor, located within the La Rocque conductive corridor.  While each of these holes encountered elevated radioactivity at the unconformity, no mineralization above a 0.05% eU 3 O 8 cut-off was identified.  WF-66, the third drill hole of the winter program, was drilled to test the D-1 conductor approximately 500 metres west of the Alligator Zone.  WF-66 failed to intersect significantly elevated radioactivity.  The final three drill holes (WF-67, WF-68, and WF-68-1), as described above, were successful in intersecting significant uranium mineralization associated with the D-1 conductor, which lies within the La Rocque conductive corridor.  This newly identified mineralization remains open along strike in both directions.  Additional drilling to test the extent of mineralization is expected to be completed during the planned summer exploration drilling program.

Following the completion of a drill hole, the hole is radiometrically logged using a downhole slimline gamma probe, which collects continuous readings of radioactivity along the length of the drill hole.  Probe results are then calibrated using an algorithm calculated from the comparison of probe results against geochemical analyses in the area.  The gamma-log results provide an immediate radiometric equivalent uranium value (eU%, then converted to eU 3 O 8 %) for the hole, which, except in very high-grade zones, is reasonably accurate.  The Company typically reports eU 3 O 8 , as a preliminary result and subsequently reports definitive assay grades following sampling and chemical analysis of the mineralized drill core.

All assayed core is split in half, with one half retained and the other sent to the SRC Geoanalytical Laboratory in Saskatoon for analysis.  Control samples are routinely assayed with each batch of core samples analyzed.

The Waterfound River property is located within the eastern portion of the Athabasca Basin region of northern Saskatchewan , approximately 40 kilometres northwest of Denison's 22.5% owned McClean Lake mill.  The Waterfound JV is an unincorporated contractual arrangement between Orano Canada (62.4223%), Denison Mines Inc. (11.7767%), and JCU (25.8010%).  Denison holds an effective 24.6772% ownership interest in the Waterfound JV through its direct interest in the joint venture and its 50% ownership of JCU.

Denison is also engaged in post-closure mine care and maintenance services through its Closed Mines group (formerly Denison Environmental Services), which manages Denison's reclaimed mine sites in the Elliot Lake region and provides related services to certain third-party projects.

The technical information contained in this release has been reviewed and approved by Mr. Andrew Yackulic , P. Geo., Denison's Director, Exploration, who is a Qualified Person in accordance with the requirements of NI 43-101.

Certain information contained in this news release constitutes 'forward-looking information', within the meaning of the applicable United States and Canadian legislation, concerning the business, operations and financial performance and condition of Denison.

Generally, these forward-looking statements can be identified by the use of forward-looking terminology such as 'plans', 'expects', 'budget', 'scheduled', 'estimates', 'forecasts', 'intends', 'anticipates', or 'believes', or the negatives and/or variations of such words and phrases, or state that certain actions, events or results 'may', 'could', 'would', 'might' or 'will be taken', 'occur', 'be achieved' or 'has the potential to'.

In particular, this news release contains forward-looking information pertaining to the following: the interpretation of exploration results and expectations with respect thereto, including the interpretation of the results from the Waterfound River exploration program undertaken by Orano Canada, underlying assumptions and the Waterfound JV's intentions with respect thereto; exploration plans and objectives; and expectations regarding its joint venture ownership interests and the continuity of its agreements with its partners.

Forward looking statements are based on the opinions and estimates of management as of the date such statements are made, and they are subject to known and unknown risks, uncertainties and other factors that may cause the actual results, level of activity, performance or achievements of Denison to be materially different from those expressed or implied by such forward-looking statements.  For example, the modelling and assumptions upon which the interpretation of results are based may not be maintained after further testing or be representative of actual conditions.  Denison believes that the expectations reflected in this forward-looking information are reasonable but no assurance can be given that these expectations will prove to be accurate and results may differ materially from those anticipated in this forward-looking information.  For a discussion in respect of risks and other factors that could influence forward-looking events, please refer to the factors discussed in Denison's Annual Information Form dated March 26, 2021 or subsequent quarterly financial reports under the heading 'Risk Factors'.  These factors are not, and should not be construed as being exhaustive. 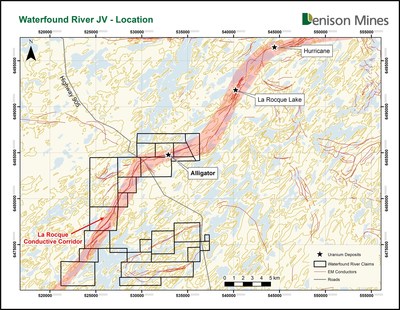 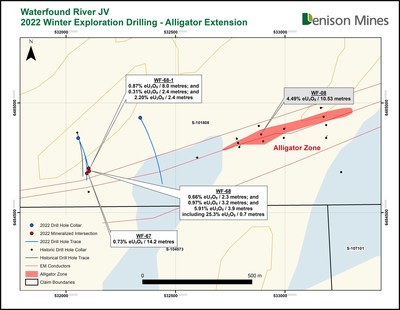 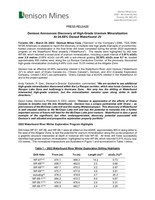 Blue Sky Uranium (TSXV:BSK,OTC:BKUCF,FSE:MAL2.F) is an advanced exploration and development mining company focused on the Rio Negro province of Argentina. The company’s flagship project, the Amarillo Grande Project, has an NI 43-101 compliant resource estimate of 22.7 million pounds of uranium and 11.5 million pounds of vanadium.

Laramide Resources Ltd. ("Laramide" or the "Company") is pleased to announce the commencement of a diamond drill program at its Westmoreland Uranium Project in Queensland, Australia ("Westmoreland"). 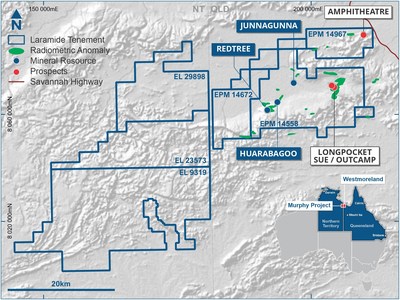 The current phase of the Australian 2022 drilling program is focused on an initial test of a potential satellite deposit called the Amphitheatre prospect ("Amphitheatre"), which is located approximately 16.5km NE of the Junnagunna deposit, one of the three mineralized zones comprising the Westmoreland mineral resource.

Amphitheatre is situated entirely within EPM 14558 (see map below Figure 1) and within an area of previously identified radiometric anomalies but was not considered a priority target by Laramide during their previous drill campaigns at Westmoreland , which were principally focused on converting historical resources to the measured and indicated category in anticipation of the ultimate development of Westmoreland as a large-scale open pit uranium mine.

Another satellite deposit known as Longpocket (or Sue / Outcamp) did see some limited drilling in 2010 and again in 2012 but was never included in the overall resource at Westmoreland . A second phase of the 2022 Australian drilling program is expected to focus once again on this target with a view to expanding the overall resource at Westmoreland . This phase of the program would be expected to follow completion and delivery of results from the 1,000 metres of planned drilling at Amphitheatre and would likely commence no sooner than late Q3/2022.

Laramide has plans for exploration programs in Australia that include an initial phase of drilling at the Murphy Project, which is situated in the Northern Territory and is contiguous to the Westmoreland tenements in Queensland . Laramide has already completed several earlier phases of exploration work at Murphy – including extensive geophysics and some widespread surface geochemistry (see reference to technical report below) – but the large tenement package has yet to be drilled and was acquired for its district scale potential.

"We are pleased to be drilling and actively exploring again in Australia and have been encouraged by the dramatic improvement in the uranium price, which is finally beginning to reflect very tight supply /demand fundamentals in the sector," said Marc Henderson , President and CEO of Laramide Resources. "The broader energy supply constraints, a renewed emphasis on energy security of supply including the provenance of the supply, and the focus on transitioning to the production of clean energy are expected to contribute to the price fundamentals of uranium mining."

Laramide currently has a healthy balance sheet to support its expanding exploration effort and also plans to ramp up its investor relations initiatives. To this end, we are pleased to announce that Ann Baines has joined the company as Director, Investor Relations, effective immediately. Ms. Baines brings over 20 years' experience working with TSX and ASX listed junior mining companies, including Bannerman Resources, Frontera Copper, Queenston Mining and Kensington Resources.

References to work completed by Laramide on Murphy Project is available in this Report, Independent Technical Report on the Murphy Project, Northern Territory, Australia on the Company's website.

Laramide is engaged in the exploration and development of high-quality uranium assets. Its wholly owned uranium assets are in Australia and the United States . Laramide's portfolio of advanced uranium projects have been chosen for their production potential. Its flagship project, Westmoreland , in Queensland, Australia , is one of the largest projects currently held by a junior mining company. Its U.S. assets include La Jara Mesa in Grants, New Mexico , and La Sal in the Lisbon Valley district of Utah . Its portfolio also includes joint ventures in the Northern Territory, strategic equity positions and a portfolio of uranium royalties in the Grants Mineral District of New Mexico .

Valor Resources Limited (Valor) or (the Company) (ASX:VAL) is pleased to announce the commencement of an airborne gravity gradiometry (AGG) survey at the Hook Lake and Hidden Bay Uranium Project (the Project) in the eastern Athabasca Basin.