Conquest Resources Limited (TSXV: CQR) ("Conquest" or the "Company") announces that from September 7th to 13th, 2022, Conquest completed a 419 line-km heliborne high-resolution magnetic survey covering the Marr Lake PGE-Cu-Ni Project situated 65 km southwest of Atikokan, Ontario. Prospectair Geosurveys Inc. was contracted to survey the Property with flight lines orientated N-S at 50 m spacings, and E-W tie lines were flown at 500 m spacings. The orientation of the survey was optimized to cover the interpreted E-W orientated Marr Lake Intrusive, as well as to cover any other structural features that may control the potential emplacement of other similar types of intrusions and rare-element pegmatites that are a second deposit type being explored for on the Marr Lake PGE-Cu-Ni Property.

The survey was successful in mapping the magnetic properties of the Marr Lake Intrusive, part of a series of mafic, ultramafic, and alkaline stocks and sills known as the Quetico Intrusions which are known to host PGE-Cu-Ni mineralization. The geophysical survey outlined an elongated east-west magnetic anomaly that mostly falls under the waters of Marr Lake which corresponds with the interpreted outline of the ultramafic intrusive. The preliminary data was used to execute a mid-fall reconnaissance prospecting program in which a total of 20 grab samples were collected. Samples were collected from the main showing (862401 to 862414) located along the northwestern shoreline of Marr Lake, as well as the only other known outcropping located approximately 800 m to the WSW (862418 to 862420). Samples 862415 to 862417 were collected north of the main showing from a gabbroic intrusive that outcrops along the shoreline of a small marsh. At the main showing, samples 862401 to 862409 were collected along a poorly exposed trench over a length of approximately 20 m, and samples 862410 to 862414 were collected from a blasted pit located 10 m to the west of the trench. Of the 20 samples that were collected, 3E (Pt+Pd+Au) values ranged from 6 to 2,617 ppb, Cu+Ni values ranged from 42 to 8,000 ppm, and Cr values ranged from 6 to 1,930 ppm (see Table 1 below).

Samples collected from the Marr Lake Intrusive were pyroxenite in composition and contained trace to 3% interstitial sulphides consisting of pyrite, chalcopyrite, and pyrrhotite.

Grab samples are selective in nature and may not represent true mineralization on the Property.

Conquest intends to complete a 3D geophysical inversion of the magnetic data on the Property over the next few months, as well as complete additional prospecting and ground-truthing of the geophysical magnetic features in early May. The 3D geophysical inversion will give Conquest a better understanding of the extent and orientation of the Marr Lake Intrusive, along with any feeder dykes related to the intrusive which will also make attractive exploration targets. 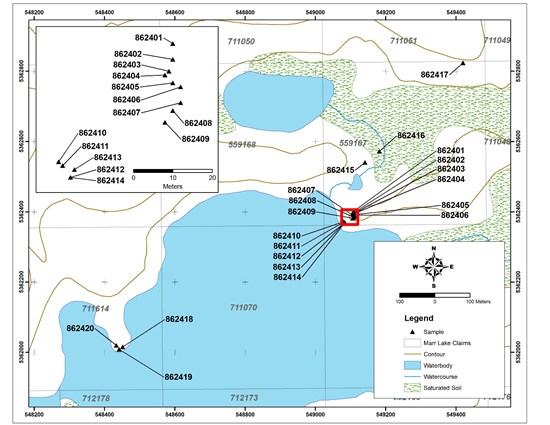 Samples were delivered by Conquest to Activation Laboratories Ltd. in North Bay, Ontario.

Once the samples are received and dried at the laboratory, the samples are then crushed to 80% passing 10 mesh (2 mm) and then split into 250 g sub-sample size using a Jones Riffle Splitter. These sub-samples are then pulverized using rings and pucks to 90% passing 200 mesh (0.075 mm) and homogenized prior to analysis. Precious metal analysis is performed using a 30 g charge by fire assay using lead collection with a silver inquart (1C-Exploration package) with ICP-MS finish. The detection limits for Au range from 2 to 30,000 ppb, and Pt and Pd both range from 1 to 30,000 ppb.

Results for the 38-element ICP analysis (1E3 package) include digesting 0.5 g of the sample with aqua regia for 2 hours at 95 °C. The sample is cooled and then diluted with deionized water. The samples are then analyzed using an Agilent 700 series ICP for the 38-element suite. QC for the digestion is 15% for each batch, 2 method reagent blanks, 6 in-house controls, 8 sample duplicates and 5 certified reference materials. An additional 20% QC is performed as part of the instrumental analysis to ensure quality in the areas of instrumental drift. If over limits for base metals are encountered, a sodium peroxide fusion, acid dissolution followed by ICP‐OES is completed.

A certified standard and blank were inserted into the sample stream which comprised 10% of the number of grab samples that were submitted for analysis.

Joerg Kleinboeck, P.Geo., a Qualified Person as defined by National Instrument 43-101, has reviewed and approved the technical content of this news release.

Conquest holds a 100% interest in the Belfast - Teck Mag Project,located in the Temagami Mining Camp at Emerald Lake, approximately 65 kilometers northeast of Sudbury, Ontario, which hosts the former Golden Rose Gold Mine and is underlain by highly prospective Abitibi greenstone geology along a strike length of seventeen (17) kilometers.

Conquest now controls over 300 sq km of underexplored territory, including the past producing Golden Rose Mine at Emerald Lake, situated in the Temagami Mining Camp.

Forward-looking statements. This news release may include certain "forward-looking statements." All statements other than statements of historical fact, included in this release, including, without limitation, statements regarding the completion of the Acquisition and the Consolidation, the release of escrowed funds, future cash on hand, potential mineralization, resources and reserves, exploration results, and future plans and objectives of Conquest, are forward-looking statements that involve various risks and uncertainties. There can be no assurance that such statements will prove to be accurate and actual results and future events could differ materially from those anticipated in such statements. Important factors that could cause actual results to differ materially from Conquest's expectations are exploration risks detailed herein and from time to time in the filings made by Conquest with securities regulators. Neither the TSXV nor its Regulation Services Provider (as defined in the policies of TSXV) accepts responsibility for the adequacy or accuracy of this release.

To view the source version of this press release, please visit https://www.newsfilecorp.com/release/151737

Conquest Resources Limited (TSXV: CQR) ("Conquest" or the "Company") announces that it has entered into an agreement whereby it has granted an option to Atha Energy Corp.("Atha") to acquire up to 100% undivided interest in mineral leases known as the Golden Rose Property located in the Sudbury Mining District, Ontario. To fully execute the option, Atha must issue an aggregate of 1,500,000 shares of Atha and make cash payments of $1,000,000.00 over a period of 36 months. Atha has also agreed to Conquest a 1.0 % net smelter return on the Golden Rose Project.

Conquest Resources Limited (TSXV: CQR) ("Conquest" or the "Company") is pleased to announce it has entered into an option agreement (the "Agreement") to acquire 100% of the Marr Lake Cu-Ni-PGE Property ("Property"). The Property is a grass roots property that is prospective for Cu-Ni-PGE and Li mineralization in an area that has seen limited exploration in the past.

The Property is located 70 km southwest of Atikokan, Ontario, and is contiguous with Green Technology Metals Wisa Lake Property that hosts Li-Ta bearing pegmatite dyke swarms that have been mapped over a strike length of 1.5 km, with widths of up to 20 m having been reported. President and CEO Tom Obradovich stated, "The Marr Lake Project underlines Conquests focus on critical metals with potential for Cu-Ni-PGE and Lithium. Our Nipigon Basin Project has Uranium in addition to NI-Cu-PGE targets and our Temagami Belfast Project is currently being explored for Ni-Cu PGE as well as IOCG potential."

This news release should be read in conjunction with the Company's unaudited interim consolidated financial statements and the associated management's discussion and analysis (MD&A) for the three months ended March 31, 2022 which are available on the Company's website at www.conquestresources.com or under the Company's profile at www.sedar.com.

Conquest Resources Limited (TSXV: CQR) ("Conquest") is pleased to announce that it has engaged Simone & Co. LLP as auditors. Simone provides services to both private and public companies.

Conquest would like to thank McGovern Hurley LLP for their years of high-level professional service and wish them continuing growth and success for the future.

Conquest Resources Limited (TSXV: CQR) ("Conquest") is pleased to announce today that it has entered into a Purchase and Sale Agreement with Stevens Geophysics Inc. (SGI), whereby Conquest will acquire a 100% interest in the Nipigon Rift Property located south of Black Sturgeon Lake, Nipigon, Ontario.

Redstone Resources Limited (ASX: RDS) (Redstone or the Company) presents its quarterly report for the period ending 31 December 2022 (the Quarter).

Auric Mining Limited (ASX: AWJ) (Auric or the Company) is pleased to report on its activities during the 31 December 2022 Quarter and up to the date of this announcement.