This Portofino Resources Inc profile is part of a paid investor education campaign.*

Portofino Resources Inc. (TSXV:POR,FWB:POTA) is a Canadian mineral resource company with lithium and gold projects in the Americas. The company’s focus is on its three lithium brine projects located within Argentina’s Catamarca Province, which is one of the leading lithium production centers in South America’s Lithium Triangle. The region’s salars have become the world’s main source for lithium carbonate production. Additionally, Portofino’s three lithium projects are all located near key producers and advancing projects, such as FMC Lithium, Galaxy Resources (ASX:GXY) and LSC Lithium Corp. (TSXV:LSC), to name a few.

Recent exploration work at the company’s Hombre Muerto West and Rio Grande Sur properties has yielded promising results. At Hombre Muerto West, a surface sampling program tested 18 areas of interest and returned 1,031mg/L lithium, Portofino’s highest-grade brine assays to date. At Rio Grande Sur, 13 samples from the property were tested and returned values of up to 216mg/L and 4,185 mg/L potassium. Additionally, lithium has been found in spring-sourced surface waters, which indicate that the area may be a key source of lithium for the salar.

The demand for lithium is expected to rise over the coming years to reach approximately 900,000 tonnes by 2025. Most of the demand is being fueled by the adoption of clean energy initiatives and the rising demand for electric vehicles (EV), in which lithium plays a critical role. As the name implies, lithium is a main component in the lithium-ion battery.

Portofino has entered into a definitive agreement to acquire a 100 percent interest in the Hombre Muerto West lithium brine project located in Catamarca, Argentina. The 1,804-hectare Hombre Muerto West project is comprised of two claim blocks and is located within the world-class, Salar del Hombre Muerto, where FMC Lithium is currently producing lithium carbonate and Galaxy Resources is developing its Sal de Vida project.

Samples were analyzed by Alex Stewart Analytical Laboratory in Argentina.

In 2019, Portofino announced its plan to commence a geophysical survey on the property. The program returned elevated near-surface lithium values, conductivity anomalies and identified multiple drill targets. The conductive anomalies identified in the program extend from the surface to a depth of 250 meters for at least 2.5 kilometers across the project.

Portofino has executed a definitive agreement to acquire a 100 percent interest in the 8,500-hectare Rio Grande Sur lithium brine salar project in Catamarca, Argentina. The concession area consolidates the southern extension of the Rio Grande salar and covers one of the primary water sources for the main Rio Grande salar brines.

The property is adjacent to the Rio Grande concessions held by LSC Lithium who has reported an initial mineral resource estimate, which has an inferred resource of 2,190,000 tonnes of lithium carbonate equivalent with the top 50 meters of the deposit amounting to 1,375,435 tonnes grading 338mg/l lithium and the lower 50 meters to 100 meters amounting to 814,582 tonnes grading 410mg/l lithium.

Portofino’s 2018 exploration program included geological mapping and pit and auger sampling of near-surface saline brines to a depth of one meter. In total, 13 sample sites were tested and returned values of up to 216mg/L and 4,185 mg/L potassium on the property. Additionally, lithium has been found in spring-sourced surface waters, which indicate that the area may be a key source of lithium for the salar. 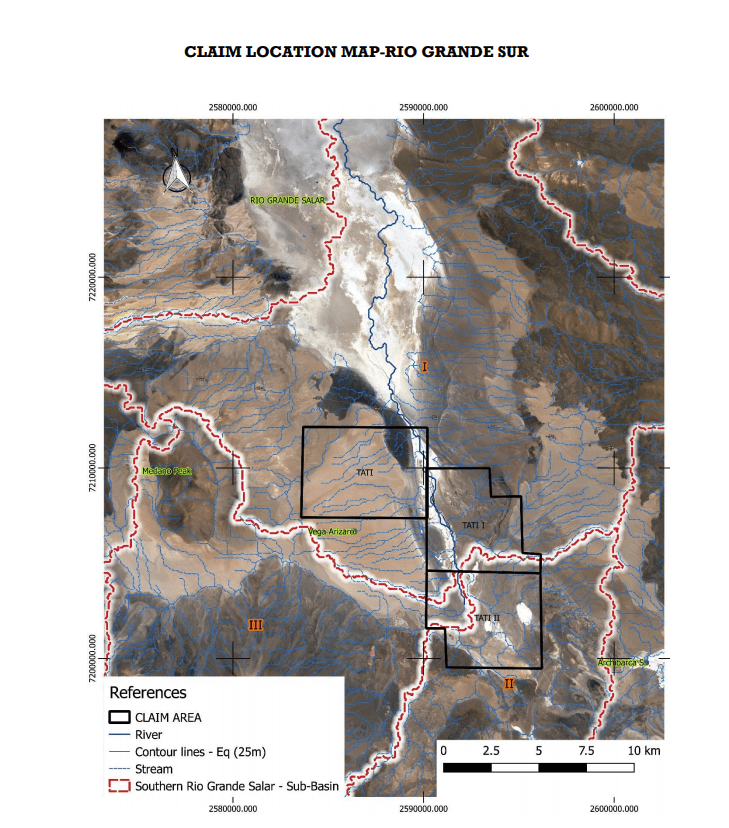 Exploration work conducted by a previous operator in 2012 included geological mapping, sampling of surface waters, auger sampling of brines and compilation of the distribution of lithium and potassium grades within the basin. Results from the surface water and auger brine samples averaged 274 mg/L of lithium.

June 2017, APEX Geoscience completed a comparative surface sampling program that validated the results received in 2012. As a result, Portofino intends to move forward with a definitive agreement on the property and to initiate a formal exploration program. 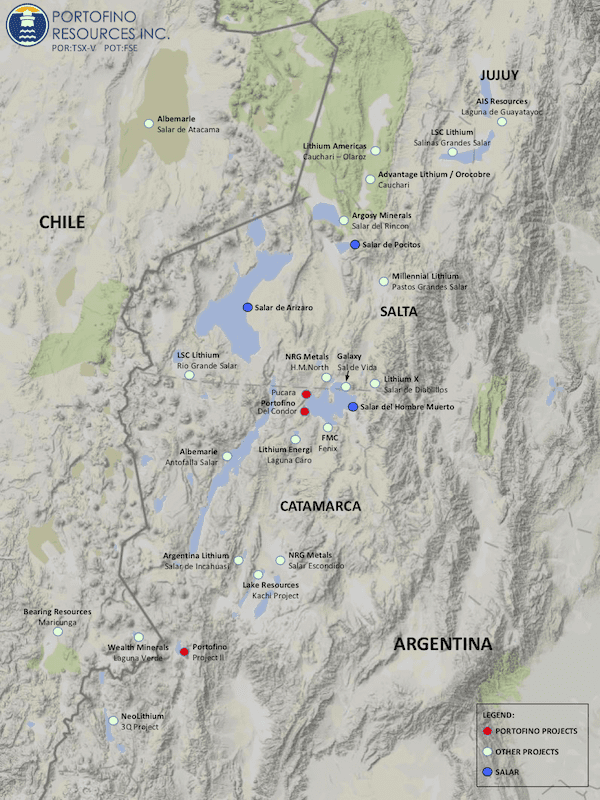 In February 2019, Portofino amended its agreement to acquire a 100 percent interest in the 2,932-hectare Yergo lithium brine salar project in Catamarca, Argentina. The project is located approximately 20 kilometers to the south of Neo Lithium Corp.’s 3Q project.

The following month, the company commenced a comprehensive field exploration program at the property. The program is comprised of geological mapping and brine sampling. Mapping is expected to focus on the nature and extent of the salar deposits as well as an examination of the surrounding bedrock geology. Brine sampling is expected to be conducted on any surface waters and from near-surface brines.

Portofino has the right to acquire a 100 percent interest in a 5,120-hectare mining claim block in the Red Lake mining district in northwestern Ontario. The claims are located in the Birch-Uchi-Confederation Lakes greenstone belt, which hosts the world-renowned Red Lake gold deposits. This includes Great Bear Resources’ Dixie project, which is currently being drilled. The property is also located approximately 40 kilometers southeast of Red Lake, Ontario in the South of Otter Lake township and 12 kilometers east of Great Bear Resources’ Dixie Lake high-grade gold discoveries. 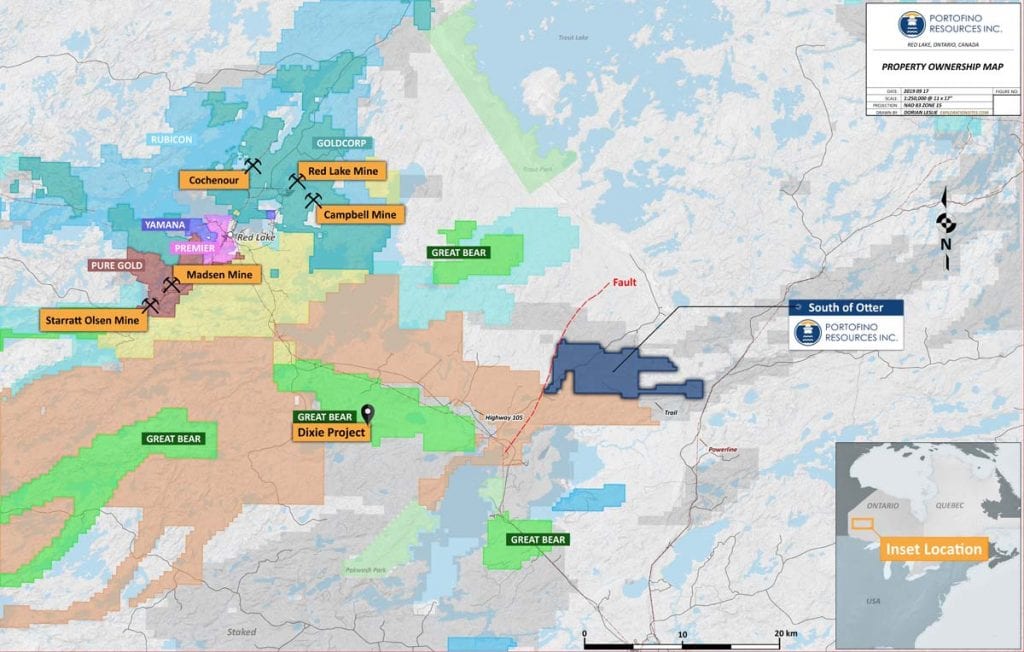 Historical exploration on the project includes prospecting, sampling and diamond drilling. Moving forward, Portofino intends to compile all of the available assessment work to assist in the planning of the company’s maiden exploration program at the property.

In June 2020 Portofino Resources announced the execution of a binding agreement to acquire six claims totaling approximately 869 hectares in the Atikokan area of northwestern Ontario. To be known as the Melema West property, the land package is located 28 kilometers northeast of Atikokan, Ontario with excellent road access. 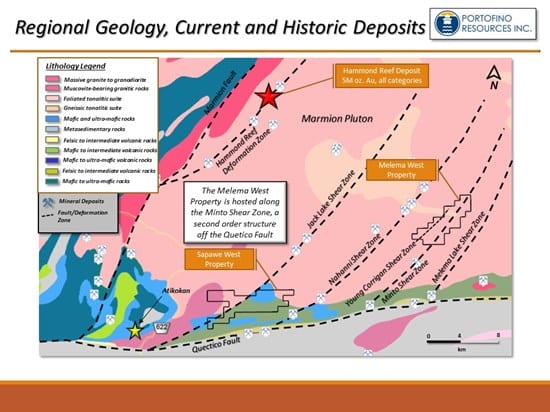 The Melema West property, which is within the Wabigoon Subprovince, is located in an area believed to host several gold deposits and occurrences. The gold zones appear to relate to northeast-trending shear zones which are recognized as splays off the east-west trending Quetico Fault. Agnico Eagle Mines’ Hammond Reef gold deposit is located approximately 19 kilometers away, with similar mineralization. The Hammond Reef deposit reportedly hosts a large, near-surface deposit with a measured and indicated resource containing approximately 4.5 million ounces of gold in 208 million tonnes grading 0.67 g/t gold. Portofino has begun to compile all available historical data on the project and intends to develop exploration targets for its summer 2020 exploration program moving forward.

Portofino has the option to acquire a 100 percent interest in the 1,800-hectare Iron Horse-Bolivar silver-gold project in British Columbia’s Peachland region. The property is located eight kilometers southeast of the past-producing Brenda Mine.

Historical work on the property dates back to the late-1890s. Historical data suggests that exploration work has been carried out on the property by various operators, such as Noranda Exploration, Brenda Mines, Esso Minerals, Fairfield Minerals and Placer Dome, between 1936 and as recently as 2005. Data also suggests that historical production was conducted between 1939 and 1941. In total, 244 tonnes of ore yielding 1,618 grams of gold and 15,116 grams of silver were produced during this period.

David Tafel holds a B.A. in Economics from the University of Western Ontario and contributes over 20 years of corporate structuring, strategic planning, financing and management experience to the company. He is currently CEO of Centurion Minerals Ltd., an agri-gypsum fertilizer company with operations in Argentina. He has been an officer and director of a number of publicly listed companies. He co-founded MBMI Resources Inc., which became a nickel producer in the Philippines that reached a market capitalization of $400 million. He led the spin out of Garson Gold Corp (from MBMI) and as CEO went on to acquire the New Britannia gold mine in Manitoba from Kinross and High River. Garson was subsequently bought out by a Toronto-based mining company for over $35 million. Prior to his public company experience, Tafel managed private investment funds at the largest independent Canadian securities firm.

Kenneth Cawkell is a member of the British Columbia Bar Association, and, in 1987, he co-founded the law firm Cawkell Brodie LLP, where he remains as Managing Partner. For over 25 years, he has been involved in technology industries within public, private and venture capital markets; successfully fulfilling the roles as a professional advisor and as a principal and investor. In his professional capacity, he has focused on intellectual property, technology transfer, financial and transaction structuring, and securities law.

In the mid to late 1990s, Stephen Wilkinson was the Vancouver-based mining analyst for RBC Dominion Securities Inc. and was responsible for small capitalization gold and base metal companies. From 1999 to 2002, he was President, CEO and Director of Northern Orion Explorations Ltd. and currently President and CEO of WPC Resources Inc., a British Columbia-based gold exploration company.

Jeremy Wright brings over 20 years’ experience to clients as President and CEO of Seatrend Strategy Group. He currently serves as a Director of Demetra Minerals, Budly Software and Pacific Community Resources Society. He previously served as a Director with PreveCeutical Medical, Good Ventures, the Canadian Freestyle Ski Association and several community associations and municipal advisory boards, including the Gateway Stakeholders’ Advisory Committee for the City of Coquitlam. Additionally, Wright currently serves as the CFO for several public and private companies including: Portofino Resources, Centurion Minerals, Demetra Minerals, GreenTec Holdings, PayVida Solutions and was previously the CFO for PreveCeutical Medical.

Wright is a Chartered Professional Accountant (Certified Management Accountant). He has extensive negotiation training, including the University of British Columbia’s Sauder School programs: “Advanced Negotiation Skills” and “Strategies, Skills and Tactics of Negotiation”. He also holds a Bachelor of Arts, with honors in Environmental Economics from Brock University.

Sebastian Cattaneo is responsible for tactical delivery of the Argentine operations, including community relations, vendor management and local administration. He has over 15 years of experience in oil and gas and mining industries, along with a degree in environmental engineering from the University of Buenos Aires.

Having lived in Vancouver for over 10 years, Cattaneo relocated back to Argentina in 2010 to be the Country Manager for junior mining company specializing in fertilizers where he managed the startup of the company. As an Argentine and Canadian, he has a unique understanding of both Argentine and Canadian business practices allowing him to bridge professional and cultural gaps effectively.

*Disclaimer: The profile provides information which was sourced and approved by Portofino Resources Inc. (TSXV:POR,FWB:POTA) in order to help investors learn more about the company. Portofino Resources Inc. is a client of the Investing News Network (INN). The company’s campaign fees pay for INN to create and update this profile page, to which links are placed on Investingnews.com and channel newsletters.