GoviEx Uranium Inc. is pleased to announce that it has commenced a diamond drill core assay program on the Birimian-aged metasedimentary, volcanic and intrusive rocks intervals from previous existing diamond drill core completed within the Falea deposit in Western Mali. The objective of the sampling program is to investigate the polymetallic and precious metal potential of the deposit below the uranium bearing …

GoviEx Uranium Inc. (TSXV: GXU) (OTCQB: GVXXF) (“GoviEx or the Company”) is pleased to announce that it has commenced a diamond drill core assay program on the Birimian-aged metasedimentary, volcanic and intrusive rocks intervals from previous existing diamond drill core completed within the Falea deposit in Western Mali. The objective of the sampling program is to investigate the polymetallic and precious metal potential of the deposit below the uranium bearing sandstone unconformity.

“Our recent gold soil sampling survey, announced on July 6th 2020, highlighted the potential for gold at the Falea Project to be present stratigraphically below the uranium deposit. The core sampling program we are announcing today is focused on advancing and proving this theory. GoviEx’s team of geologists are excited by the initial visual assessment of the 96 diamond drill cores logged that display intervals of quartz veining, chalcopyrite and pyrite in many of the core, which appears to add further support and evidence that the gold anomalies associated with the Birimian greenstones apparently underlays the known uranium-copper-silver mineralization of the Falea Project.

“While the development of the Madaouela Uranium Project in Niger (the “Madaouela Project”) remains GoviEx’s primary focus, creating shareholder value on all of our projects remains a core driver to our strategy,” noted Executive Chairman, Govind Friedland.

The previous exploration work conducted before GoviEx acquired the Falea Project had stopped diamond drilling at depths approximately 30 metres into the Birimian as they were targeting the sandstone hosted unconformity itself rather than the precious and base metal potential that is well known to be Birimian hosted, including B2Gold’s Fekola project, IAMGOLD’s Diakha and Siribaya projects and Roscan’s Kandiolé project on trend and along strike. Upon review by GoviEx geologists it was discovered that much of this core was never assayed for precious metal content as previous explorers were primarily interested in the project’s uranium bearing potential.

The core samples currently being taken will be analysed for gold and multi-elements to assess the potential for gold and other base metal such as copper and silver which are already known to be present within the Falea uranium deposit.

Most significantly, GoviEx has reviewed the limited number of diamond drill holes that were assayed in the Birimian. These results are summarised in Table 1 below and show that there are anomalous intercepts ranging from 0.2 gram per tonne to 1 gram per tonne gold over up to 2-metre thickness.

Visual inspection of the core during sampling by GoviEx geologists have revealed the presence of visible chalcopyrite and pyrite mineralisation, and abundant evidence of shearing and quartz veining.

The results of the current core sampling program are expected before the end of the year and will be reported as soon as they are received. 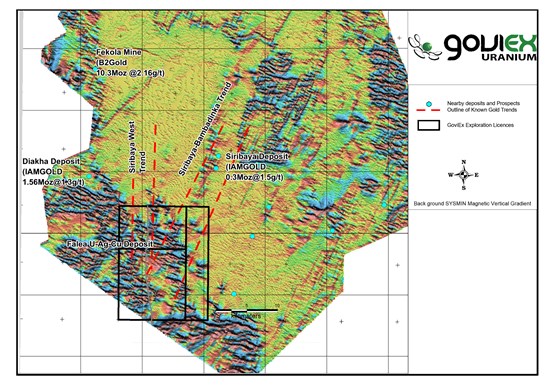 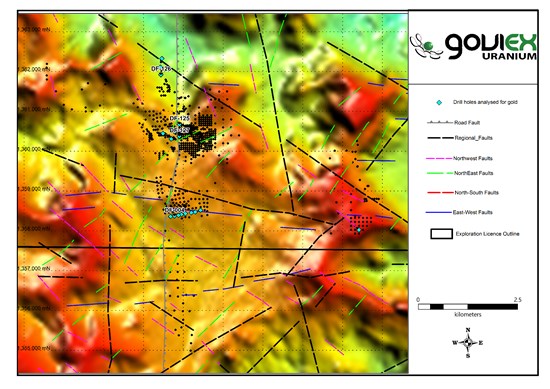 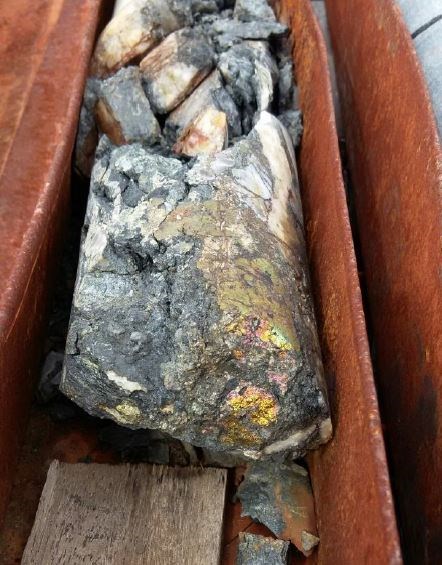 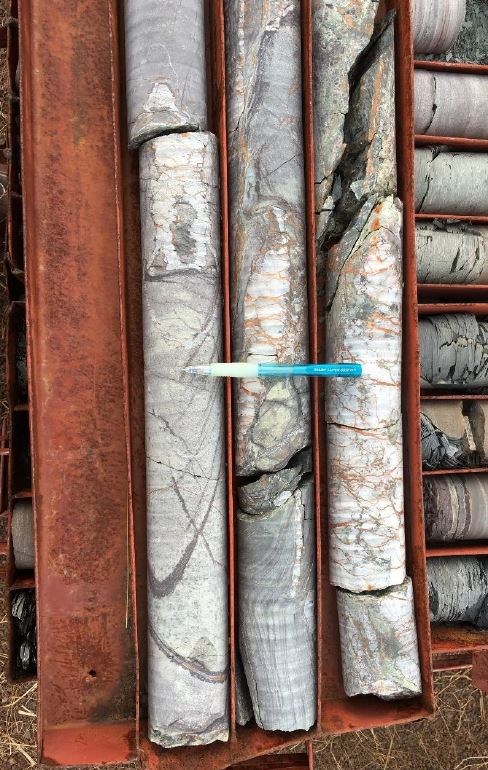 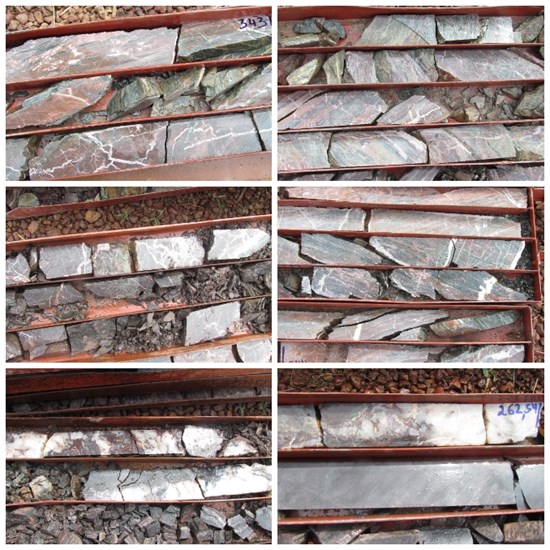 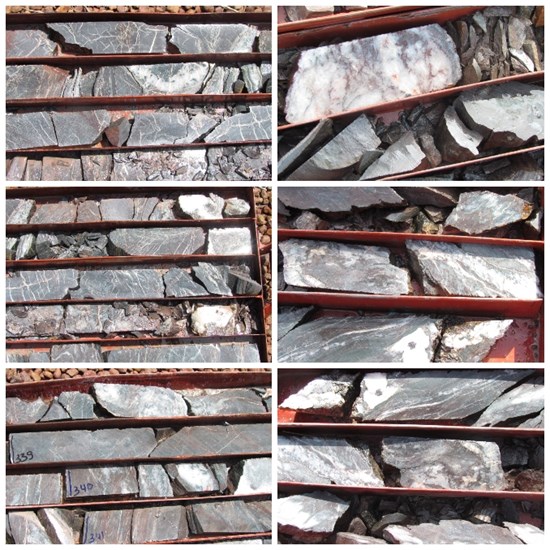 The technical content of this press release has been reviewed and approved by Mr. Jerome Randabel, MAIG, Chief Geologist of GoviEx, a Qualified Person as defined in NI 43-101.

Core samples are cleaned, photographed dry and wet, and then described in detail, including the colour, presence of quartz veins, shear zones and alterations. Presence of sulfides and principal fracture zones.

The sample length are delimited, at minimum of 0.5m to a maximum of 1.5m intervals. The core is then halved using a core saw.

For QAQC purposes for every 20 samples a duplicate, standard or a blank sample is inserted.

All samples weighed approximately 1kg and were prepared at the ALS preparatory laboratory in Bamako, Mali and assayed at the ALS laboratory in Ouagadougou, Burkina Faso, using gold by Fire Assay and AAS finish (detection limit = 100ppm). The laboratory will run blanks and standard samples to validate their results. For multi-element assay a four acid digest ICP-MS and ICP -AES method will be used. (Precision +/-7-15%)

The mineral resources reported in the Falea Project highlight the relatively high silver and copper grades associated with the Indicated Resources. The mineralization at Falea is controlled the major faulting structures, similar to gold deposition.

1. CIM definitions were followed for classification of Mineral Resources
2. Reported above a cut-off grade of 0.03% U308, based on a uranium price of US$75/lb
3. Bulk density is 2.65 t/m3
4. Numbers may not add due to rounding

The Company’s mineral resources as at October 26, 2015 are classified in accordance with the Canadian Institute of Mining, Metallurgy and Petroleum’s “CIM Definition Standards – For Mineral Resources and Mineral Reserves” in accordance with the requirements of National Instrument 43-101 “Standards of Disclosure for Mineral Projects” (the Instrument). Mineral reserve and mineral resource estimates reflect the Company’s reasonable expectation that all necessary permits and approvals will be obtained and maintained.

The Mineral Resource Statement was prepared Mark Mathisen, C.P.G., Senior Geologist, of Roscoe Postle Associates Inc., who is a Qualified Persons as defined by the CIM Code.

Forward-looking statements include those in relation to, the objective of the core sampling program, that gold anomalies associated with the Birimian greenstones apparently underlaying the known uranium-copper-silver mineralization of the Falea Project, that the development of the Madaouela Project remains GoviEx’s primary focus, core samples currently being taken will be analysed for gold and multi-elements, the potential extensions of the Sirabaya West and the Siribaya- Bambadinka gold trends through, and potentially intersecting within, the Falea Project, the mineral potential of the Falea Project, the timing for the completion of the core sampling program or assays.

Although the Company believes the expectations reflected in such forward-looking statements are based on reasonable assumptions, it can give no assurances that its expectations will be achieved. Such assumptions, which may prove incorrect, include the following: (i) the potential extensions of the Sirabaya West and the Siribaya- Bambadinka gold trends through, and potentially intersecting within, the Falea Project, that gold anomalies associated with the Birimian greenstones underlay the known uranium-copper-silver mineralization of the Falea Project, (ii) that the Madaouela Project will remains GoviEx’s primary focus; (iii) that there will be no material delays in the completion of the sampling program or assays; and (iv) the price of uranium will remain sufficiently high and the costs of advancing the Company’s mining projects will remain sufficiently low so as to permit GoviEx to implement its business plans in a profitable manner.

Factors that could cause actual results to differ materially from expectations include (i) that there is no extensions of the Sirabaya West and the Siribaya- Bambadinka gold trends through, and/or intersecting within, the Falea Project; (ii) the deposit does not meet the polymetallic and precious metal potential that was anticipated ; (iii) the inability or unwillingness of asseyers to complete and report the assays at all or in a timely fashion; (iv) the failure of the Company’s projects, for technical, logistical, labour-relations, or other reasons; (v) a decrease in the price of uranium below what is necessary to sustain the Company’s operations; (vi) an increase in the Company’s operating costs above what is necessary to sustain its operations; (vii) accidents, labour disputes, or the materialization of similar risks; (viii) a deterioration in capital market conditions that prevents the Company from raising the funds it requires on a timely basis; and (x) generally, the Company’s inability to develop and implement a successful business plan for any reason.

To view the source version of this press release, please visit https://www.newsfilecorp.com/release/66278