Since resumption of drilling on September 3rd four new drill holes have been completed including a follow-up hole on the Feeder Target in the Parisien Lake area and three holes drilled at the North Margin Target area. Three more holes are planned – two holes in the East Lobe of the intrusion and one additional hole in the Parisien Lake – Kidd Zone area. Completed and proposed hole locations for the current drilling program are shown on Figure 1, below. Samples have been submitted for assay analysis on three of the first four holes with results now pending. 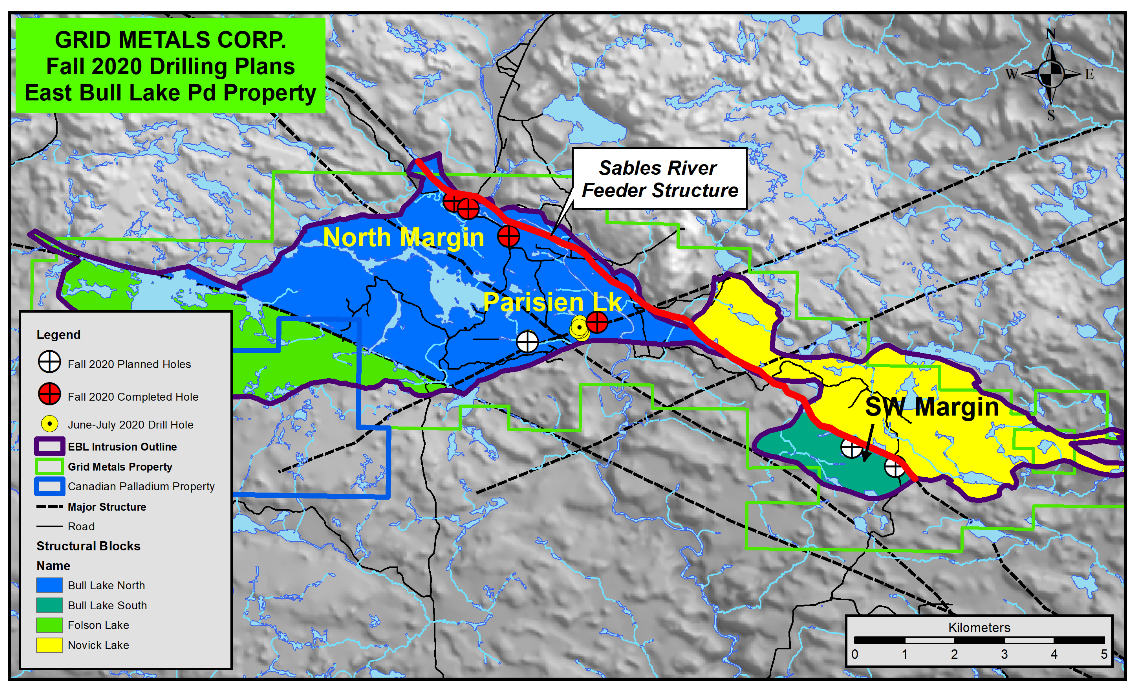 A four-week field program of mapping, prospecting and field checking of untested geophysical anomalies was completed in August and September. Seventy-five surface grab samples collected from the Parisien Lake (West lobe) and Southwest Margin (East Lobe) target areas have been analysed for Pd, Pt, Au, Cu, Ni and Co. Nine of these samples returned >1 g/t combined Pd + Pt + Au (see table, below). The highest palladium grade was obtained from sample 7231 from the Kidd Zone in the Parisien Lake area, which returned 7.67 g/t Pd, 1.41 g/t Pt and 0.20 g/t Au. The sample location is approximately 120 metres south of the collar for drill hole EBL20-02, and 20 metres north of the collar for a previously proposed drill hole, P2A, which will now be drill and is designed to fill a major gap in the historical drilling in the Parisien Lake area. Follow-up sampling is being undertaken in this area.

Additional anomalous palladium grades were obtained from several samples from the East Lobe including six samples from the Central Zone in an area that will be drilled at the end of the current program.

Table 1. Selected analytical results for surface grab samples taken in August and September, 2020 from the Parisien Lake and Southwest Margin target areas. Easting and Northing coordinates are based on the NAD 83 datum and the UTM Zone 17N projection. 3E = combined Pd, Pt and Au grade.

Pulps from 50 core samples collected from the June-July 2020 drill program were analyzed for their whole-rock major, minor and trace element geochemistry, including total sulfur determinations. The new analytical data, in addition to the Pd, Pt, Au, Ni, Cu and Co abundances for ~1,700 core samples that were obtained for the first seven drill holes completed this year, are being investigated in order to better understand the relationships between grade, metal tenor (i.e., the metal grade in the sulfide fraction of the rock assuming all of the metal reports to sulfides), rock type, sulfide mineralization, alteration, magnetic susceptibility and stratigraphic position. This review is ongoing but initial results are providing important new exploration criteria based on the following observations:

Dr. Dave Peck, the Company’s Vice President of Exploration and Business Development, commented: “We continue to systematically drill and explore for areas of great Pd enrichment at East Bull. Results to date from the 2020 exploration program reinforce our belief that the widespread palladium mineralization we continue to discover on the Property is the ‘smoking gun’ that will lead us to areas of enhanced grade and thickness. The fact that Pd grades exceeding 1 g/t have been identified from surface and drill core samples extending over a strike length of >20 km provides the technical justification for continued exploration investment on the Property. As does the fact that we are still finding previously unsampled outcrops with good grade Pd mineralization using basic prospecting methods – especially in areas with improved access due to recent logging activity. We firmly believe that significant potential remains for the discovery of one or more feeder structure-related palladium deposits on the property.”

Grid Metals applies best practice quality assurance and quality control (“QAQC”) protocols on all of its exploration programs. For the current drilling program, core is logged and sampled at a core facility located in the town of Massey, Ontario – approximately 30 km south of the property. NQ-size drill core samples are cut into halves using a diamond saw. Standard sample intervals of 1.00 metre length are used unless a major geological, structural or mineralization boundary is encountered. Samples are bagged and tagged and driven by Company consultants to ALS Laboratories’ sample preparation and analytical laboratory in Sudbury, Ontario. ALS analyzes each sample for Pd, Pt and Au using a lead collection fire assay on a 30 g pulp split and an ICP finish. Copper, Ni and Co are analyzed by ALS using a multi-acid digestion and an ICP finish. ALS also performs complete characterization whole-rock geochemical analyses on pulp rejects as directed by the Company, including the determination of major, minor and trace element abundances with research-grade accuracy and detection limits. The Company uses two PGE certified reference materials (“CRMs”) and one analytical blank purchased from Canadian Resource Laboratories to monitor analytical accuracy and check for cross contamination between samples. One of the CRMs or the blank are inserted every tenth sample within a given batch. The analytical results for the two CRMs and the blank for the sample batches reported here did not show any significant bias compared to the certified values and the results fell within the acceptable limits of variability.

About Grid Metals Corp.
Grid Metals Corp. is an exploration and development Company that has a diversified portfolio of projects in the nickel-copper-platinum group metal sectors. These commodities are vital to the emerging battery metals, energy storage and automotive sectors. All of Grid’s projects are located in secure North American mining jurisdictions. The Company is focused on timely advancement of its property portfolio through prudent exploration and development activities.