FenixOro CEO John Carlesso stated: “These results are a very positive development as they open several new exciting possibilities for our drilling program. Hole 6 represents an area of previously unknown high grade gold mineralization demonstrating both the highest grades and the widest zones drilled to date. Extensions of the parallel trend to the main Santa Teresa Vein add significant potential to the northwest block, which will be a focus of Phase 2 drilling. We have now extended the known vertical extent of the veins to at least 1200 meters and it’s still wide open at depth. While we are very pleased with the success realized to date, we are truly just beginning to understand the potential of Abriaqui.”

As seen in Figure 1, Hole P006 was drilled to the south from the same platform as P005 to test the area between the northwest trending vein corridor (NWC) and the east-west trending corridor of veins (EWC) described in the press release of February 22, 2021. Two significant veins were intersected: 0.75 meters at 14.45 g/t gold and 7.70 meters of 8.46 g/t gold. The second vein represents the best combination of grade and thickness drilled to date. The core of the intercept is a single sample containing 124.5 g/t over 0.45 meters and it is flanked by several meters of veinlet style mineralization.

Hole P005 was drilled to the south at a -45 degree angle to test the 350 meter wide NWC which was intersected in P001. As previously reported, nine veins were cut in P001 including 4.14m @ 5.08 g/t and 1.3m @ 28.18 g/t (summarized in Table 1). A principal goal of P005 was to test the newly named Santa Teresa Vein system in an area of significant historical mining about 450 meters northwest of the original intersection in P001. Due to significant deviation of the 750 meter hole, the intersection missed the original target and the realized vein intercept was modest. However, near the bottom of the hole, a 1.35 meter intercept at 12.28 g/t extends the length of the deepest vein in P001 150 meters to the northwest. This intersection, the deepest to date at Abriaqui, also extends the known vertical range of high grade gold mineralization to over 1200 meters.

In the upper 60 meters of both P005 and P006 multiple open spaces were intersected, some of which were filled with old mining debris (Figure 1 and Table 1). These represent old mined out areas on a set of closely spaced veins at the western end of the EWC. No vein samples were available in the open spaces but the veins obviously had high enough gold grade to attract the efforts of artisanal miners from prior generations. Hole P008 was drilled at a steeper angle to test the veins underneath the old workings but it too intersected open spaces. These particular historical mines were previously unknown and are some of the deepest ever developed in the district. The close vein spacing mirrors that in hole P003 where 24 veins were intersected within the 250 meter wide EWC.

Final results for holes P007 and P008 are expected shortly and will be reported when available. The Phase 1 diamond drilling program has been finished and the drill was demobilized in early February. Final assaying is underway, and all results are expected by the end of February. With the proceeds from the recent financing successfully closed, the Company is well-positioned to commence the next phase of drilling in early March. 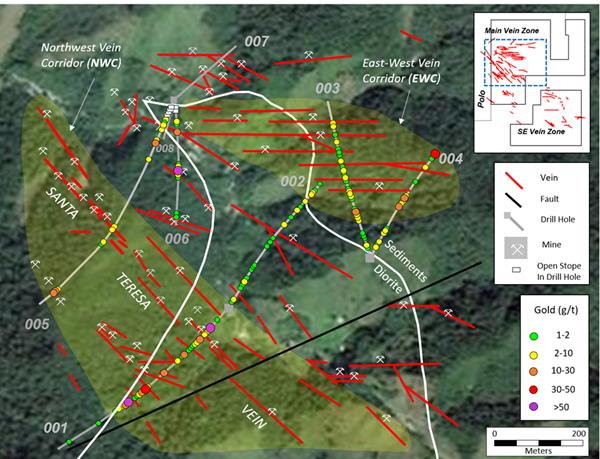 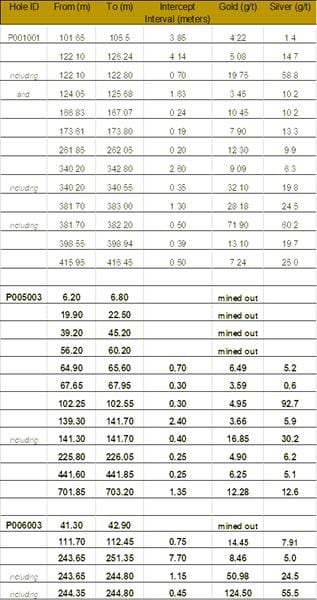 Stuart Moller, Vice President Exploration and Director of the Company and a Qualified Person for the purposes of NI 43-101 (P.Geo, British Colombia), has prepared or supervised the preparation of the technical information contained in this press release. Mr. Moller has more than 40 years of experience in exploration for precious and other metals including ten in Colombia and is a Fellow of the Society of Exploration Geologists.

Drill core sampling is done in accordance with industry standards. The HQ and NQ diameter core is sawed, and half core samples are submitted to the laboratory. The other half core along with laboratory coarse reject material and sample pulps are stored in secure facilities on site and/or in the sample prep lab. Following strict chain of custody protocols, the samples are driven to the ISO 17025:2017 certified ALS Laboratory sample preparation facility in Medellin and ALS ships the prepared pulps to their assay laboratory in Lima, Peru. Blanks, duplicates, and certified reference standards totaling 15% of the total samples are inserted into the sample stream. To date, no material quality control issues have been detected. Gold is analyzed by fire assay with 50 gram charges for grades in excess of 10 grams per tonne and the additional elements are analyzed by ICP with appropriate follow-up for over- limits.

Reported grade intervals are calculated using uncut gold values as the current database is too small to calculate statistically valid levels for cutting high grade assays. Maximum sample length is one meter. Intervals which include multiple samples are calculated using the full geologic interval of mineralization and are not subject to specific rules for cutoff grades. As such, quoted thickness and grade of these intervals do not necessarily represent optimized economic intervals in a potential future mine. Reported sample and interval widths are based on lengths of individual samples in core and do not necessarily represent true widths of mineralization. True widths will sometimes be less than the quoted interval lengths.

The currently reported results may not represent full results for a given drill hole as some additional sampling may be required. All material drill results will be publicly reported in due course regardless of when they are received.

The comparison between Abriaqui and the nearby Buritica project is meant only to indicate the similarities between the two in terms of geological setting. FenixOro does not imply that exploration results and/or economic characteristics of a potential future mine at Abriaqui will be similar to those seen at Buritica.

FenixOro Gold Corp is a Canadian company focused on acquiring gold projects with world class exploration potential in the most prolific gold producing regions of Colombia. FenixOro’s flagship property, the Abriaqui project, is located 15 km west of Continental Gold’s Buritica project in Antioquia State at the northern end of the Mid-Cauca gold belt, a geological trend which has seen multiple large gold discoveries in the past 10 years including Buritica and Anglo Gold’s Nuevo Chaquiro and La Colosa. As documented in “NI 43-101 Technical Report on the Abriaqui project Antioquia State, Colombia” (December 5, 2019), the geological characteristics of Abriaqui and Buritica are very similar. A 4290 meter Phase 1 drilling program has been completed at Abriaqui following the completion of surface and underground geological mapping and sampling, as well as a preliminary magnetometry survey. To date, drilling has been focused on the northwest block of the property where two main sets of veins have been identified. Drill results have returned assays demonstrating multiple intercepts of “Buritica style” high grade gold mineralization and wider zones of lower grade mineralization.

FenixOro’s VP of Exploration, Stuart Moller, led the discovery team at Buritica for Continental Gold in 2007-2011. At the time of its latest report, the Buritica Mine contains measured plus indicated resources of 5.32 million ounces of gold (16.02 Mt grading 10.32 g/t) plus a 6.02 million ounce inferred resource (21.87 Mt grading 8.56 g/t) for a total of 11.34 million ounces of gold resources. Buritica began formal production in November 2020 and has expected annual average production of 250,000 ounces at an all-in sustaining cost of approximately US$600 per ounce. Resources, cost and production data are taken from Continental Gold’s “NI 43-101 Buritica Mineral Resource 2019-01, Antioquia, Colombia, 18 March, 2019”). Continental Gold was recently the subject of a takeover by Zijin Mining in an all-cash transaction valued at C$1.4 billion.