Edgemont Gold Corp. is pleased to announce that planning is underway for a fully funded Phase I, 3000 m drill program this summer at its Dungate coppergold porphyry project located 6 km south of Houston, B.C.The Company’s Notice of Work has been reviewed and accepted by the B.C. Ministry of Mines and is now awaiting issuance of the final drill permit. As a result of IP surveys completed last year, Edgemont expanded …

The Company’s Notice of Work has been reviewed and accepted by the B.C. Ministry of Mines and is now awaiting issuance of the final drill permit. As a result of IP surveys completed last year, Edgemont expanded its initial Notice of Work to make it a multi-year program, adding an additional 10 holes that can be drilled following successful completion of the Phase I drill program

We are very much looking forward to the start of our summer drill program at Dungate” stated Stuart Rogers, the CEO of Edgemont. “The similarities between Sun Summit’s recent discovery at Buck and the properties of the breccia zone reported in the drill log for DDH C75-01 drilled in 1975 have contributed to the targeting of an exciting first drill hole”.

The initial six drill targets at Dungate are 7 km north of the high grade gold/silver discovery recently announced by Sun Summit Minerals Corp. on their adjacent Buck property, where their recent claim staking in 2020 expanded their property to the southern boundary of the Dungate property. A map showing the location of the Dungate property is available here: 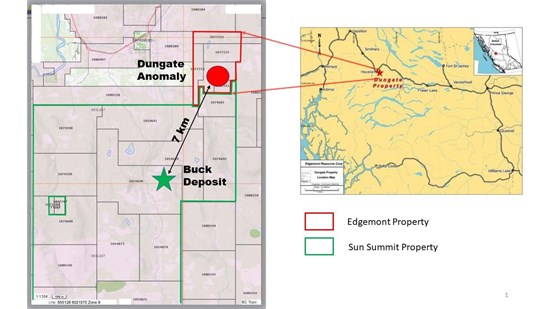 The initial drilling planned for the Dungate project will be comprised of six deep holes (approximately 500 m each). The first holes will test a strong cohesive circular chargeable anomaly approximately 1.2 km in diameter (chargeability response varies from 15mv/v to greater than 60 mv/v) identified by Edgemont during a 16 line km IP survey conducted in September 2020. This chargeability anomaly appears to be increasing in size and strength with depth and is coincident with a total magnetic intensity high identified in a magnetic survey completed by Edgemont in 2019. Both geophysical anomalies occur on a quartz feldspar porphyry (“QFP”) identified by Edgemont in mapping and surface rock sampling in 2019 and 2020. In addition, the magnetic and IP surveys also identified another possible intrusion, much larger in size, under overburden to the north of the initial Dungate showing. This target has never been drilled and will be tested for the first time during this summer exploration program.

Drilling was last conducted at Dungate in 1976, with numerous shallow (

The drill log for DDH C75-1 also indicates 24 m of quartz-pyrite (“Qtz-Py”) breccia zone was intercepted about 90 meters downhole with similar characteristics to that reported by Sun Summit at the nearby Buck discovery this January. This zone appears to be an exciting gold target within the larger copper-gold porphyry and will be tested in the first drill hole planned for this summer. A map interpreting the location of this possible Qtz-Py breccia zone using the recent geophysical data now available can be accessed here: 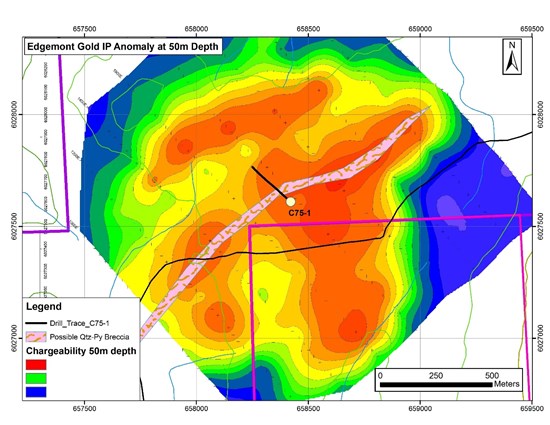 The Dungate property in its entirety is thought to be mostly underlain by volcanic rocks of either the Jurassic Hazleton Group or the Eocene Endako Group. These volcanic rocks have been intruded by a probable QFP intrusion of Eocene age. The currently known mineralization on the property is proximal to the immediate area of this QFP intrusion. This geological environment hosts potential for porphyry copper-gold-molybdenum mineralization. Outcrop on the property is limited but in the southeast quadrant of the IP anomaly potassic altered quartz feldspar porphyry intrusive occurs in historic trenches with sulphide mineralization grading up to 0.54% Cu and up to 1.70 g/t Au in outcrop.

The technical information contained in this news release has been approved by Joseph Campbell, P. Geo, a Director of Edgemont, who is a Qualified Person as defined in “National Instrument 43-101, Standards of Disclosure for Mineral Projects.”

Edgemont is actively exploring the Dungate copper/gold porphyry project located just 6 km south of Houston in the Omenica Mining Division of northern British Columbia. Having acquired an interest in its initial claims at Dungate in 2018, the Company now holds five mineral tenures covering 1,582.2 hectares that can be explored year round by all-season roads. For more information, please visit our web site at www.edgemontgold.com.

To view the source version of this press release, please visit https://www.newsfilecorp.com/release/84335