Brigadier Gold Limited is pleased to provide additional diamond drill and underground sampling results from ongoing phase one exploration at its Picachos gold-silver project, Sinaloa Mexico . Brigadier has completed and received assay results for 3085 metres of diamond drilling in 28 holes on the Picachos Project. Assays results for holes 21 through 28 and recent underground sampling are provided in Table 1 …

Brigadier Gold Limited (the “Company” or “Brigadier”) (TSXV:BRG)(FSE:B7LM)(OTC PINK:BGADF) is pleased to provide additional diamond drill and underground sampling results from ongoing phase one exploration at its Picachos gold-silver project, Sinaloa Mexico (the “Picachos Project”, “Picachos” or the “Property”). Brigadier has completed and received assay results for 3085 metres of diamond drilling in 28 holes on the Picachos Project. Assays results for holes 21 through 28 and recent underground sampling are provided in Table 1

Geologist and Qualified Person as defined by National Instrument 43-101 – Standards of Disclosure for Mineral Projects (“NI 43-101“), Michelle Robinson comments “results of our phase-one program at Picachos imply a robust and geographically expansive mineralized system for which we have only just scratched the surface. I am very pleased with our results, in particular the number of targets demanding follow up drilling or for newly discovered zones, a first ever drill hole. The Cocolmeca vein structure (CVS) is persistent and strongly mineralized and I look forward to expanding the depth and strike length in 2021, as well as continuing the exploration of the rest of the CVS, particularly in the central Cocolmeca area.”

Of the 28 holes drilled to date, fourteen (1704 metres) were drilled to test the San Agustín Vein, 10 holes (1029 metres) tested surface exploration targets defined by trenching, 2 holes (168 metres) tested under the historic San Antoñio Mine and one hole tested under the historic La Gloria Mine. San Agustín and San Antoñio represent two gold-rich, polymetallic mineral chutes about 2.5 kilometres apart on Brigadier’s regional-scale Cocolmeca Vein System (CVS), and La Gloria historically produced gold from a northwesterly trending vein roughly orthogonal to the CVS. The CVS has been defined at varying levels of certainty along the east-northeasterly trending diagonal of the Property for more than seven kilometres.

La Gloria Gold Mine and Palodismo
La Gloria underground gold mine is accessed from a 106 metre long east-southeasterly trending cross-cut located at 965 metres elevation in the central part of the Property. This opening provides access to a southeasterly trending stope that is more than 70 metres long and about 1.5 metres wide. Historic sample MTA-15659 was cut across the northwest face of this stope and contained values of 21.09 g/t Au, 6.6 g/t Ag, 0.4% Cu, 0.8% Pb and 0.5% Zn across 0.8 metres. The orientation of the structure at this location is 162°/75° SW. Brigadier cut a sample across the southeastern face of the stope which returned a result of 49.6 g/t Au and 31 g/t Ag across 0.4 metres (BRG-26402) and a notably more easterly orientation of 150°/74° SW. Mineralization in the stope consists of microcrystalline quartz breccia intergrown with pink epidote (piemontite?), and native gold along a shear zone hosted in agglomerate. The mud matrix between volcanic blocks and bombs is pervasively replaced by microcrystalline grey quartz intergrown with galena, sphalerite and lesser chalcopyrite.

Drill hole BRG-028 was collared 72 metres southwest of La Gloria. It was designed to intercept both Palodismo and La Gloria under historic sample MTA-15657 with a result of 5.27 g/t Au and 7 g/t Ag across 1.5 metres. All of DH-BRG-028 was altered to propylitic mineral assemblages dominated by epidote and chlorite. Microcrystalline galena and sphalerite in silicified mud between volcanic blocks and bombs defines a broad geochemical response of 0.4% Zn, 0.2% Pb, 170 ppm Cu, 0.2 g/t Au and 2 g/t Ag along the entire hole length of 183.5 metres. The section between 59 and 64 metres contains 1.2% Zn and 0.3% Pb with 348 ppm Cu across 5 metres. Shear zones marked by kaolinite and/or and pink quartz-piemontite breccias contain elevated gold values. Several of these were intercepted in the hanging wall to Palodismo. One of these contains 1.8 g/t Au and 1.9 g/t Ag across 2 metres between 35 and 37 metres. Palodismo itself is defined by a geochemical anomaly of 2.29 g/t Au across 8 metres between 105 and 113 metres. The Palodismo Vein is marked by pink quartz-epidote breccia between 110 and 111 metres with values of 10.65 g/t Au across 1 metre. A three-point solution between MTA-19690, BRG-25207 and this intercept in DH-BRG-028 yields an orientation of 145°/73° SW, in good agreement with field measurements from underground exposures of Palodismo.

A second intercept of 6.26 g/t Au between 141 and 142 metres in DH-BRG-028 is only tentatively correlated to La Gloria Vein. This interpretation implies that the vein flattens out at depth to a dip of about 65 degrees. Alternatively, the strike may have changed as implied by BRG-26402, and DH-BRG-028 never reached La Gloria Vein. Further drilling is required to clearly define La Gloria Vein at depth. 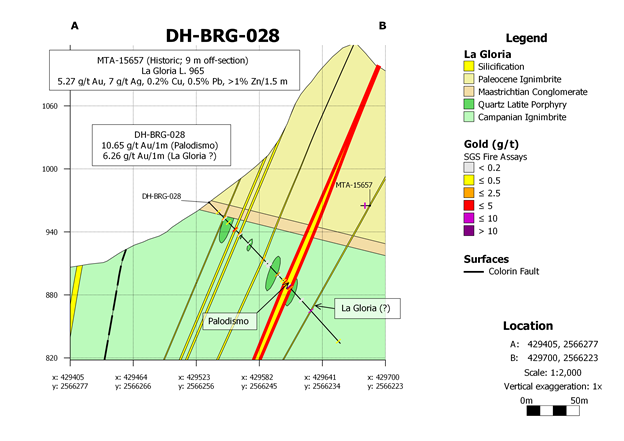 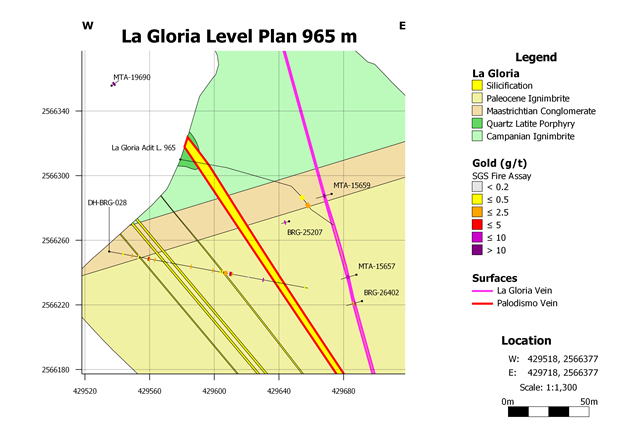 San Antoñio
San Antoñio is a historic prospect cut across the major ENE trending Cocolmeca Vein system that bisects the Property along the 8 km ENE diagonal 250 metres northwest of La Gloria Gold Mine. Values of 44.1 g/t Au, 47 g/t Ag, 0.4% Cu, 0.2% Pb and 0.7% Zn across 0.8 metres were obtained in historic sample MTA-19856. A prior operator drilled RC hole TAN3 under MTA-19856 in 2008 and got a result of 0.8% Cu, 0.29 g/t Au, 451 ppm Pb and 525 ppm Zn across 1.02 metres between 84.66 metres and 85.68 metres down-hole. Brigadier decided that historic result did not make sense considering the high-grade nature of this large, continuous vein. To clarify this view, two PQ diamond core holes were drilled with pierce points into La Coco on either side of TAN3. DH-BRG-026, cut northeast of TAN3, yielded a result of 1.07 g/t Au, 18 g/t Ag, 0.4% Cu, 0.2% Zn across 3.9 metres between 74 and 77.9 metres. This result includes 4.44 g/t Au, 6 g/t Ag, 0.1% Cu across 0.9 metres between 77 and 77.9 metres. DH-BRG-027, cut southwest of TAN3, intercepted a vein of semi-massive chalcopyrite with 12.62 g/t Au, 78 g/t Ag, 4.5% Cu, 0.2% Zn, 0.2% Pb across 0.8 metres between 54.7 and 55.5 metres down-hole. Both intercepts have significant hangingwall and footwall alteration comprised of piemontite, sphalerite, galena, pyrite and chalcopyrite (similar to La Gloria). From this data Brigadier concludes that the RC drilling method used previously was inadequate for sampling the Veins on this Property, although it was successful in locating the Veins in the subsurface. 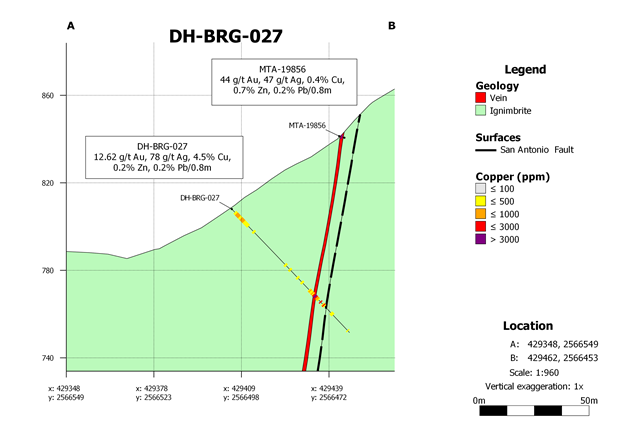 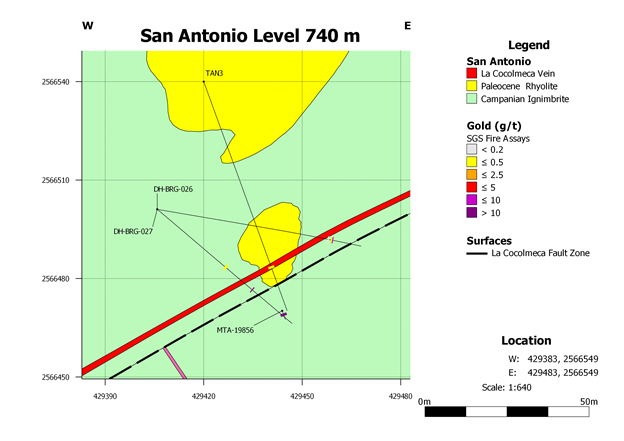 Nearby NW trending Veins
Several underground mines and prospects are developed on near-parallel veins within 500 metres to the southwest of La Gloria. These include Colorín, El Salvador, Urrea and Mangos. Of these, Urrea is the best developed with extraction levels at 840 metre, 860 metre, 895 metre, 935 metre and 1040 metre. Underground rock chip-channel results from these Veins include:

Ongoing Exploration
The Company has located and mapped several underground drifts and cross-cuts northwest of Lentes (Company PR dated 6 October) and near the Cobre Veins. A new batch of 224 underground and trench samples has been received by SGS laboratories. Results will be published when these are available from the Lab.

The Picachos land package was methodically assembled by Michelle Robinson (MASc., P.Eng., Geologist and Qualified Person) over 10 years ago. Michelle is a respected industry veteran who has worked in Mexico for over 20-years with a number of major mining companies. She has authored over 20 technical reports and published several papers for the Society of Economic Geologists. Michelle and her team are executing on our 5,000-metre diamond drill program – the first ever on this project

The project’s location, situated 25 kilometres equidistant from two recent bonanza grade discoveries of Vizsla Resources and GR Silver and along the same mineralized trend, positions Picachos as a truly exciting opportunity for Brigadier Gold and our shareholders.

The 3,954 hectare Picachos Property is centered over the historic “Viva Zapata” National Mineral Reserve, Sinaloa, Mexico. It overlaps two mineralized systems, a porphyry copper-molybdenum system hosted by a Paleocene granite-granodiorite intrusive complex, and a gold-silver vein complex comprised of both east-northeasterly trending veins (La Cocolmeca Vein System) and northwesterly trending veins (El Placer System). Sericitic alteration related to the porphyry system has been mapped over the northwestern two-thirds of the Property. Quartz-biotite veinlets with chalcopyrite and bornite occur in the central part of this broad zone of sericitic alteration and imply the presence of a significant porphyry system at depth. La Colcomeca Vein system has been mapped from San Agustín Underground Gold Mine in the southwestern part of the Property to El Pino seven kilometres to the northeast. In the central part of the Property, the best exposure of the northwesterly trending system occurs between La Gloria Underground Gold Mine and the Urrea Gold Mines, located 630 metres southwest of La Gloria. In this area, other northwesterly trending veins between these veins include Paldodismo, Colorin, Salvador, Trompetas and Mangos. On the eastern part of the Property, Tatemales and La Botica define a four kilometre long trend.

Please visit our website to learn more about Brigadier Gold.

National Instrument 43-101 Disclosure
The technical information in this press release has been reviewed by Michelle Robinson, MASc., P.Eng., a Qualified Person as defined by NI 43-101. Core and sample handling procedures are documented in the Company’s press release dated October 22, 2020. Standard pulps, field duplicates, pulp duplicates and blanks are inserted into the sample stream. The samples were analyzed by SGS Laboratories in Durango using fire-assay methods for gold, and ICP methods with a 4-acid digestion for silver and base metals. SGS is an accredited laboratory. It is the Qualified Person’s opinion that the technical information disclosed in this press release is reliable.

About Brigadier Gold Limited
Brigadier was formed to leverage the next major bull market in the natural resource sector, particularly precious metals. Our mandate is to acquire undervalued and overlooked projects with demonstrable potential for advancement.

Led by a management team with decades of experience in mineral exploration and capital markets development, we are focused on advanced exploration opportunities in politically stable jurisdictions.

Reader Advisory
This news release may contain statements which constitute “forward-looking information”, including statements regarding the plans, intentions, beliefs and current expectations of the Company, its directors, or its officers with respect to the future business activities of the Company. The words “may”, “would”, “could”, “will”, “intend”, “plan”, “anticipate”, “believe”, “estimate”, “expect” and similar expressions, as they relate to the Company, or its management, are intended to identify such forward-looking statements. Investors are cautioned that any such forward-looking statements are not guarantees of future business activities and involve risks and uncertainties, and that the Company’s future business activities may differ materially from those in the forward-looking statements as a result of various factors, including, but not limited to, fluctuations in market prices, successes of the operations of the Company, continued availability of capital and financing and general economic, market or business conditions. There can be no assurances that such information will prove accurate and, therefore, readers are advised to rely on their own evaluation of such uncertainties. The Company does not assume any obligation to update any forward-looking information except as required under the applicable securities laws.